Friday’s rally in SPX seemed to be driven by a surprisingly strong payrolls report; headline numbers were just modest at first glance (+128k), but in view of the now-settled GM strike (which probably accounted for a drop of maybe -40k), the numbers were pretty strong.

The weekly metals sector map showed gold leading silver, but miners leading metal, and juniors leading seniors. This was a mostly PM-bullish map. Copper trailed, which suggests issues with the pork-and-soybeans trade agreement. Gold/euros did poorly, which suggests the gold rally is just a currency effect. Even so, most of the PM map are back above all 3 moving averages.

Gold rose +10.09 [+0.67%] to 1522.36. The spinning top candle was a bullish continuation, and forecaster ticked higher into its modest uptrend. Gold remains in an uptrend in all 3 timeframes. Gold/Euros does not look as strong; it is in an uptrend in just daily and weekly timeframes.

The Dec 2019 rate-cut chance is 13%; the positive payrolls report reduced the market’s expectation for a rate cut. 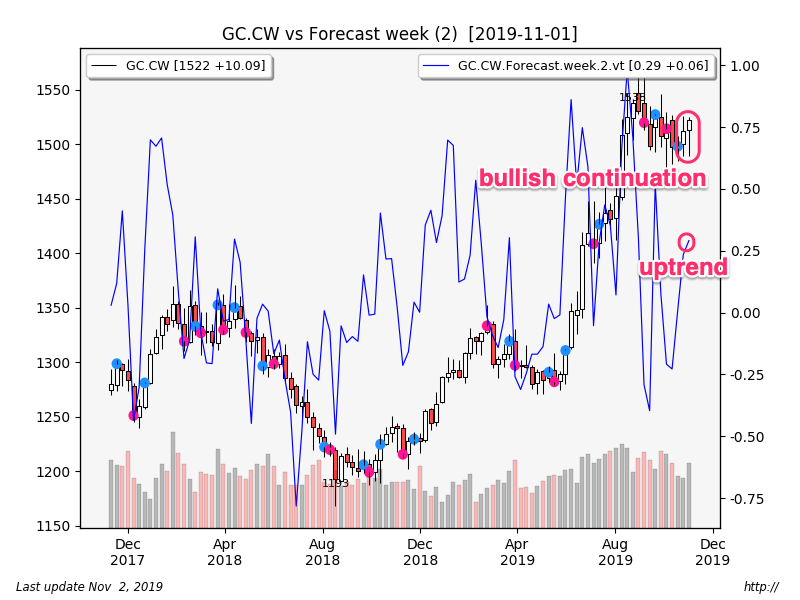 Silver rose +0.09 [+0.50%] to 18.22. Silver fell on Monday, but ended the week at a new multi-month closing high. The doji star candle was a bullish continuation, and while forecaster fell, silver remains in a slight uptrend. Silver remains in an uptrend in all 3 timeframes. 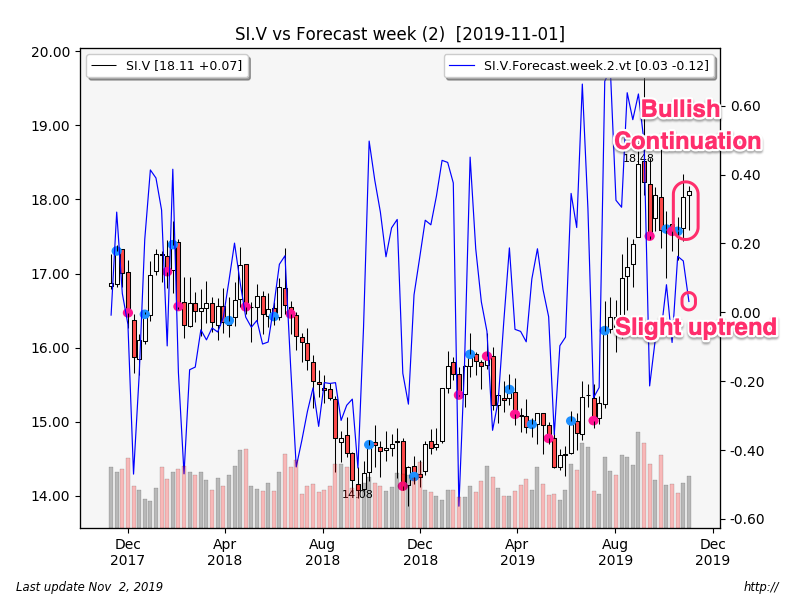 Miners rallied +2.57% this week, closing at a new multi-month high at end of week. The closing white marubozu was a bullish continuation, and forecaster moved slightly higher into its reasonably strong uptrend. XAU remains in an uptrend in all 3 timeframes. Miners are the most bullish-looking PM component. 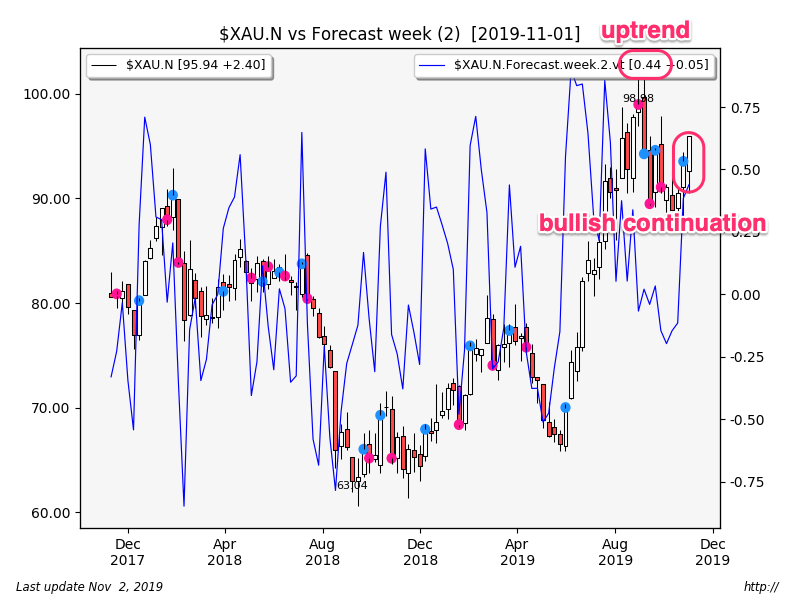 The buck plunged -0.58 [-0.60%] to 96.82, falling 5 days in a row. The spinning top candle was neutral, and forecaster inched lower into what is already a reasonably strong downtrend. The buck is sitting right at support; a drop next week could lead to another fairly large leg down. DX is back in a downtrend in all 3 timeframes.  If it continues, it should be gold-positive. 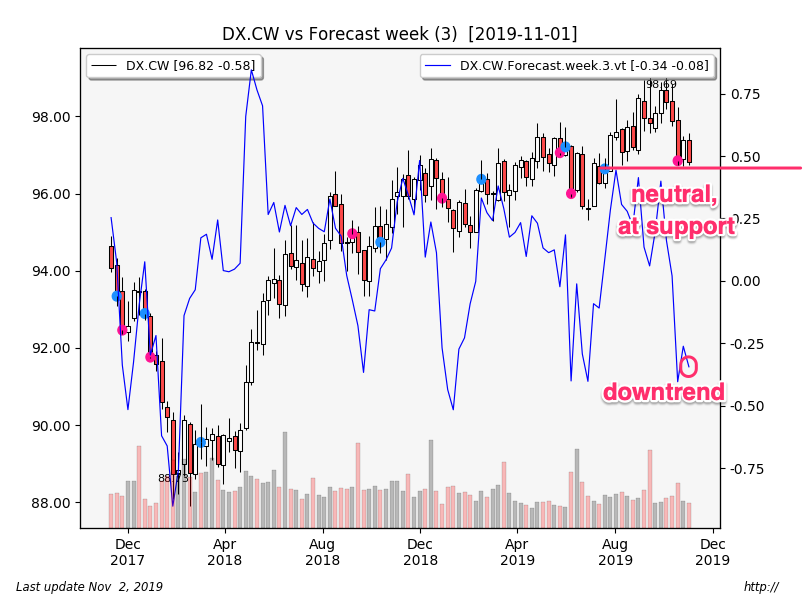 SPX rallied +44.36 [+1.47%] to 3066.91. Friday saw a new all time high for SPX. The closing white marubozu was a bullish continuation, and forecaster inched lower but remains in a strong uptrend. SPX remains in an uptrend in all 3 timeframes.

This week, sickcare and defense led, while telecom and energy did worst. It was a mostly bullish sector map.

The US equity market was #2 this week; developed Asia did best.

TY jumped +0.46%, the confirmed bullish NR7 was somewhat bullish (45%), and while forecaster inched lower, TY remains in an uptrend. TY ended the week in an uptrend in both daily and weekly timeframes. The monthly has moved into a slight downtrend.

DGS10, the 10 year yield, fell -7.3 bp to 1.73%. The bearish engulfing was bearish (58%), and forecaster inched lower but remains in an uptrend. (DGS10-Yield uptrend = bond downtrend). DGS10 ended the week in an uptrend on the weekly and monthly timeframes.  However, the candle print suggests that the yield uptrend may be ready to reverse.

Interesting that bonds rallied (DGS10 fell) along with stocks? How do we think that happened? Might it be related to the new not-QE the Fed is executing? 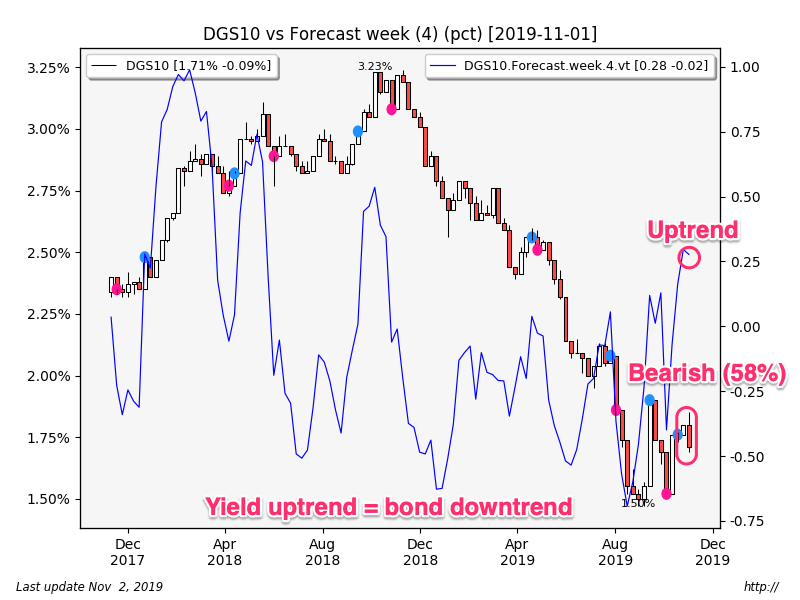 JNK plunged -0.57%, the bearish engulfing pattern was bearish (41%) and forecaster ended the week in a downtrend. BAA.AAA differential fell -6 bp to +88 bp. It looks as though money is racing back into lower quality debt – but fleeing the really crappy stuff.

Crude fell -0.42 [-0.74%] to 56.26. Crude fell for the first 4 days of the week, then rallied strongly on Friday. The high wave candle was a bullish continuation, and forecaster moved lower but remains in a reasonably strong uptrend. Crude remains in an uptrend in all 3 timeframes. 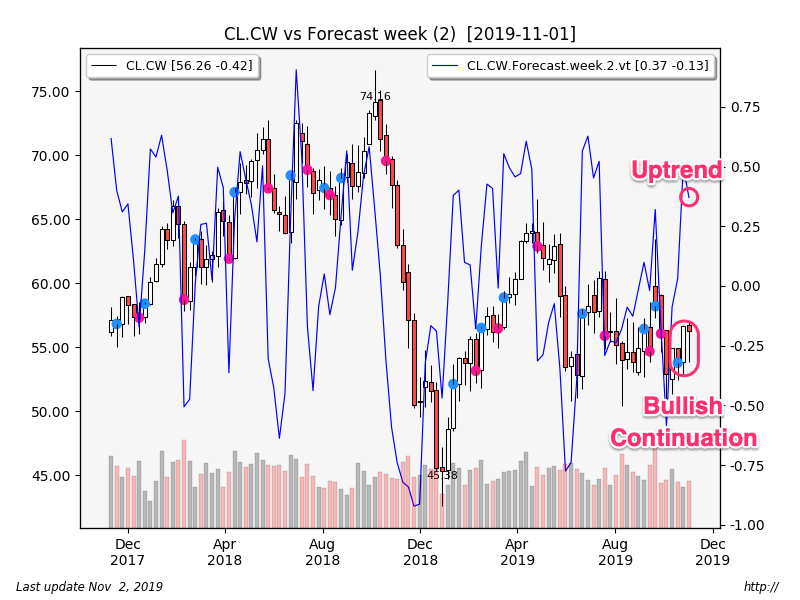 * Premium for physical (via Bullion Vault: https://www.bullionvault.com/gold_market.do#!/orderboard) vs spot gold (loco New York, via Kitco: https://www.kitco.com/charts/livegoldnewyork.html) shows no premium for gold, and a 4 cent premium for silver.

Gold, silver, and the miners continued their bullish reversal this week, aided by a falling dollar that seemed to be driven primarily by positive progress towards the UK passing a Brexit withdrawal agreement.

While the path towards Brexit withdrawal agreement passage is now somewhat more complicated – it involves replacing an obstructionist, Remainer-infested Parliament with representatives presumably more aligned with how voters actually feel – my sense is that Brexit is probably a done deal at this point, and that the majority of the positive market impact is now priced in to the market.

Economic news in the US continues along its recent course; much as the Fed observed this week, the labor market remains strong, industrial production continues to weaken (and indeed, is recessionary), while consumer income and spending grows slowly. China’s signal on Friday that the US & China have reached a “consensus on principles” hints that the Tariff Sword of Damocles may be removed from China within the month. This might help – but it also might not. How much pre-tariff-imposition buying has pulled demand forward? Only time will give us the answer to that one.

How this new “consensus” interacts with the increasingly adversarial rhetoric out of Washington (Pompeo’s recent speech as one example, unanimous voice-vote passage of the “Human Rights and Democracy” act in the House is another), the bipartisan backlash (Cruz + AOC!) over China’s attempt to get NBA coach Daryl Morey fired because of his pro-Hong Kong tweet, increasing notice taken of the up-to-3 million people in the Xinjiang concentration camps, along with accusations of espionage from network equipment manufacturer Huawei – well it is anyone’s guess.

And there is that $50 billion jump in the Fed balance sheet this week, taken alongside with the plunge in JNK, the race into bonds, and the jump in gold – it all may be signaling something. Certainly Powell didn’t let us know that the big banksters were worried about an untidy default of a major market participant, but that’s what I believe this massive QE program is trying to avoid. Fed floods the market with money, hoping some of it will float over to the places that are about to default.

And of course when bonds and equities both rise, well, perhaps that’s because the banksters received $50 billion dollars in new cash.  So off they went to buy more Treasury bonds.

Meanwhile, big bar premiums on gold and silver have changed little, and ETF discounts moved slightly higher. There is no shortage of physical gold or silver at these prices.

The COT reports show little change this week. We are nowhere near a low, at least using the usual COT model anyway.

Thanks for the clarity around these figures.  This is just bananas! Something big is afoot.

Thanks for the write up, excellent as always.

I haven’t heard lately about the hemorrhagic swine flu (AKA Pig ebola) that was going through China, but estimates were it could kill 50-75% of their domestic pork supply. Those were the last numbers on saw and I think that was from the spring of this year. Seems to me they may need our pork and they’re not doing us any favors by buying it.

As far as payroll reports go, the article below dissuaded me from taking those seriously ever again.

The labor market seemed to defy gravity last year, generating more than 200,000 jobs a month despite a historically low unemployment rate that made it harder for employers to find workers.

Turns out job growth wasn’t as robust as it appeared.

The Labor Department revised down total job gains from April 2018 to March 2019 by 501,000, the agency said Wednesday, the largest downward revision in a decade.

Mass General reported last week that the hospital was 2 weeks away from being unable to perform heart surgery due to heparin shortages.This is largely due to China controlling 80%of the active ingredients needed to manufacture our drugs.Pig intestines are needed to manufacture heparin.Last checked, the virus has wiped out supply in 8 countries.China’s pharma control was/is by design.War rooms have been set up,the Pentagon has warned etc.National Security is threatened.Three years ago the one honorable thing Gary Cohn did was make it known that the quickest way for China to destroy the US was to shut off our antibiotic supply.After the possible Smithfield-Pfizer trade?

Three months ago the USDA quietly summoned veternarians from around the country to Plum Island in order to teach them how to access enlarged spleens for the virus.This is not a matter of if,but when.And yes more fortunes have been made on those trades as well…Lets call that political intelligence…

Here’s how that looks on a weekly chart.  Red line is the change vs last week, black line is the total size of the balance sheet.

Something is definitely up.  You can watch this too: https://fred.stlouisfed.org/series/WALCL 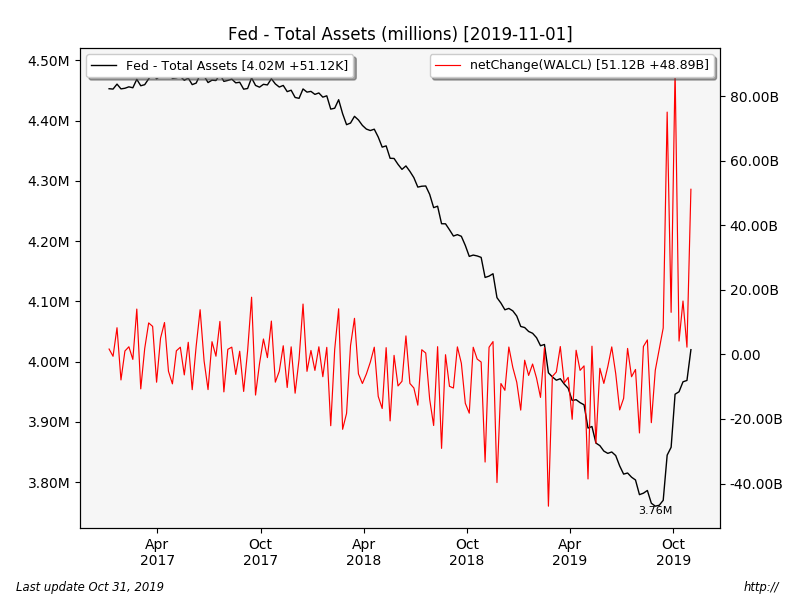 supply chain issues are huge as you probably know.

The FDA shortage database has lots of essential medicines on it. And IV fluids.

No doubt the supplier/manufacturers have an idea of the impact when they shut down production. Is it malice or indifference?  I think it depends.  yet the Fentanyl keeps making its way here…

What did you do?You consulted the list.That info is used and monitored on a regular basis by firms as a guide to trade.In DC they have political intelligence firms who are generously paid “consultancy fees”providing info on pharma,healthcare bills,tax law to give the edge to trading houses, hedge funds etc.Some firms even show up at senate hearings.Last year a midsize biotech in Mass was in the middle of phase 2 clinical trials.All of a sudden the stock got hammered.Two weeks later the CEO was notified that the drug wasn’t going to make it.He held that info telling no one.The stock tanked further.My point is, when you have the problem finally reaching the national news its a thing.And maybe evaluate what might be needed for your family in emergency.