The weekly metals sector map looks terrible for PM; juniors did worst, silver led gold lower, while copper rallied. All PM items are below the 9 MA, and the core group (GDX/GDXJ/gold/silver) are all below the 50 MA as well.

Gold fell -56.48 [-3.71%] to 1465.88. The strong line candle was bearish, and forecaster plunged into downtrend. On the daily chart, gold broke below the previous low of 1482 (by a hair) on Thursday, and closed well below it on Friday. Volume was immense this week. Gold ended the week in a downtrend in all 3 timeframes.

The Dec 2019 rate-cut chance is 4%; the improvement in sentiment about the US-China trade negotiations (as well as some relatively positive US economic reports) appear to make another rate cut unlikely.

Commercial net fell -16k contracts, which was +21k new shorts but also +6k new longs. Managed money net fell -1k contracts, or +4k new shorts and +3k new longs. COT report isn’t telling us anything helpful at the moment. With the record in OI – I’m not sure the COT report has meaning, since I’m guessing that the activity of “non-economic actors” are overriding the usual wash-and-rinse cycle. 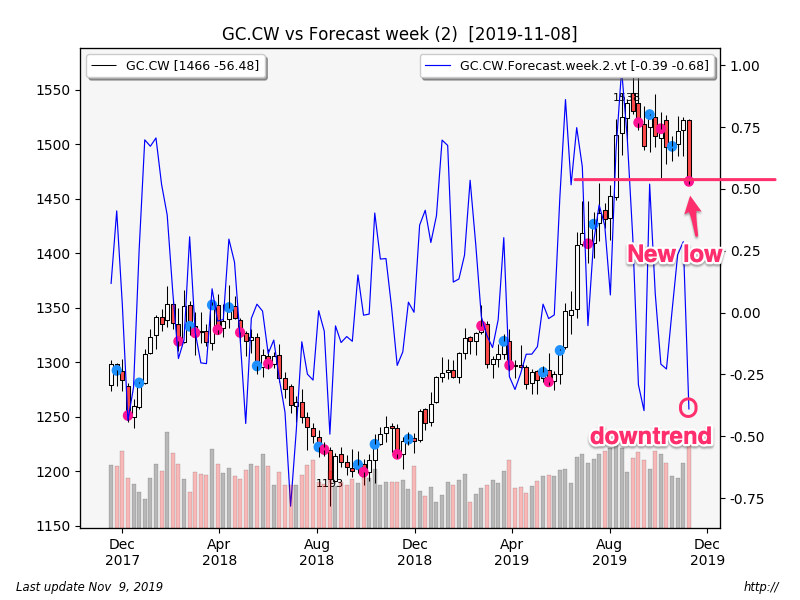 Silver plunged -1.35 [-7.45%] to 16.76 this week. This was the largest weekly drop for silver since 2016. The strong line candle was bearish, and forecaster dropped into a downtrend. On the daily chart, silver has now closed below the previous low; that’s a bad sign, and continues the pattern of lower highs and lower lows which characterize a downtrend. Silver ended the week in a downtrend in both the daily and weekly timeframes. 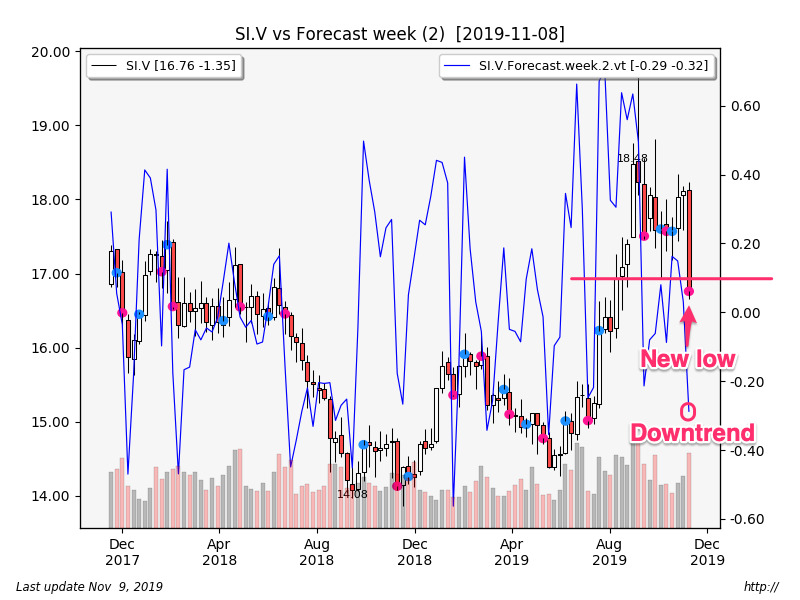 Miners fell -4.43% on the week; unlike silver and gold, miners did not break down below the previous low. The long black candle was mildly bearish (34%) and while forecaster fell, it remains in an uptrend. In fact, XAU ended the week in an uptrend in both weekly and monthly timeframes. Miners are easily the most bullish-looking PM component in the group. 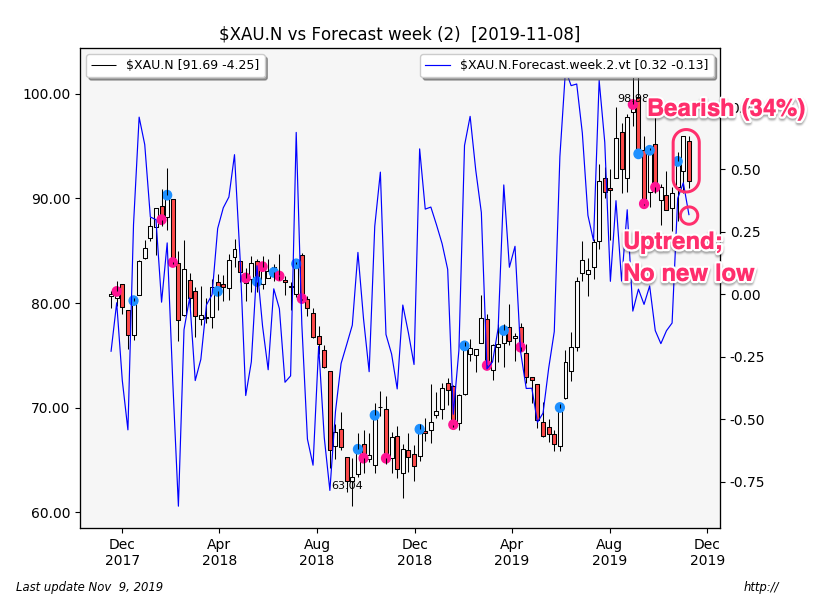 The buck jumped +1.12 [+1.16%] to 97.94. The long white candle was neutral, and forecaster moved higher but remains in a downtrend. This week’s rally has pulled DX back into an uptrend in both daily and monthly timeframes. 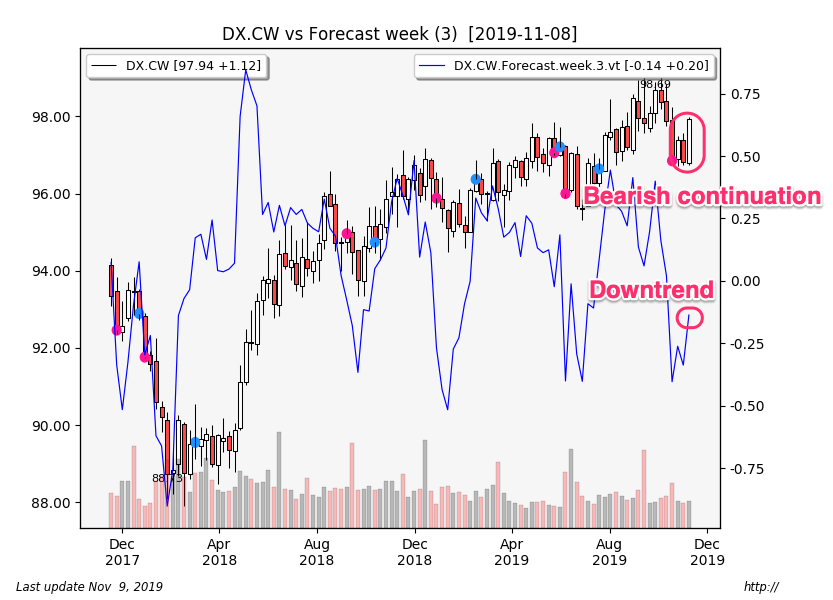 SPX rallied +26.17 [+0.85%] to 3093.08. That’s another new all time high for SPX. The closing white marubozu candle was a bullish continuation, and forecaster inched lower but remains in a strong uptrend. SPX remains in an uptrend in all 3 timeframes. 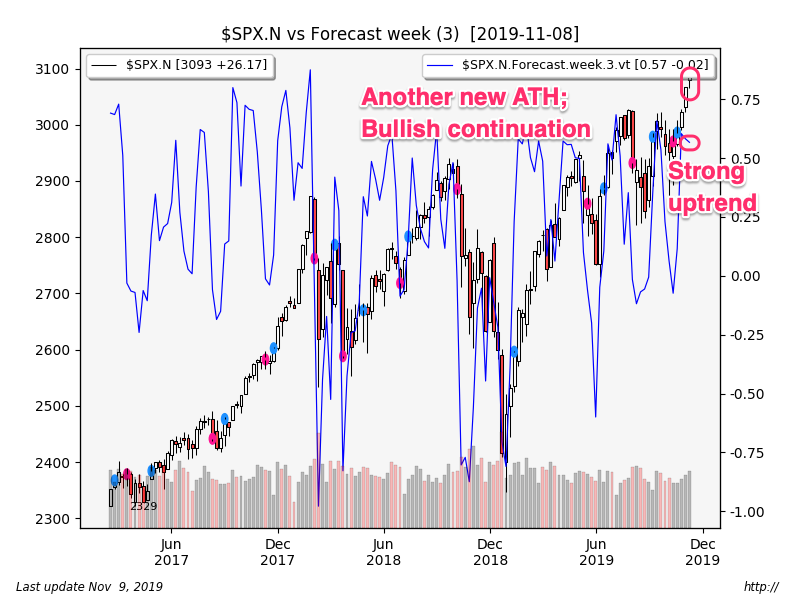 This week, telecom and financials led, while utilities and REITs performed worst. This was a mostly bullish sector map.

The US equity market was in the middle of the pack this week; emerging Asia was at the top.

TY fell -1.49%, the opening black marubozu was a bearish continuation, and forecaster dropped into a downtrend. TY ended the week in a downtrend in all 3 timeframes. TY broke below its previous low, just like gold.

DGS10, the 10 year yield, jumped +20.5 bp to 1.93%. The long white candle was a bullish continuation, and forecaster inched higher into its uptrend. DGS10 remains in an uptrend in both weekly and monthly timeframes. Reminder: yield uptrend = bond downtrend. If you own bonds, and yield rises, you lose money – the longer the duration, the more the bonds will drop in value. 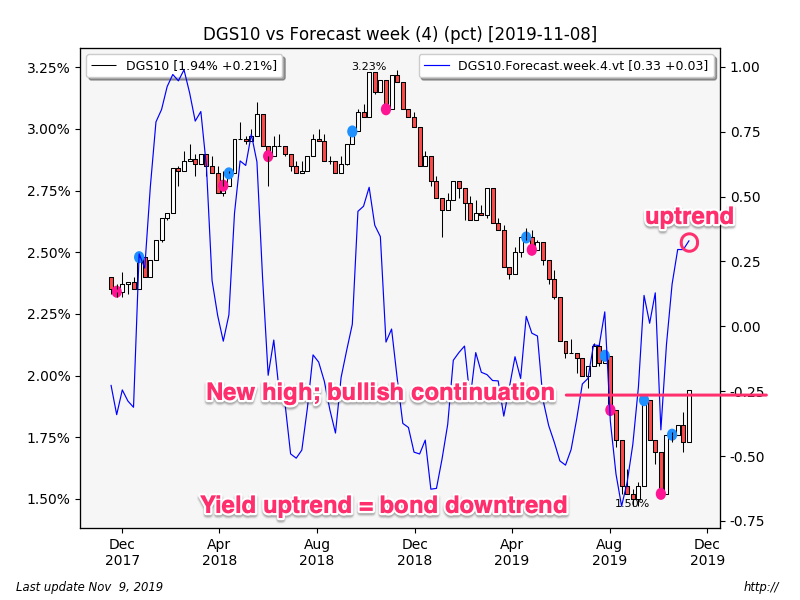 JNK fell -0.04%, the short black candle was unrated, and forecaster remains in a downtrend. -0.57%, the bearish engulfing pattern was bearish (41%) and forecaster ended the week in a downtrend. BAA.AAA differential rose +3 bp to +90 bp. There are still no real worries about debt quality right now, even though the enthusiasm for the really crappy debt is slowly fading.

Crude rallied +1.14 [+2.03%] to 57.40. The short white candle was a bullish continuation, and forecaster inched higher into its reasonably strong uptrend. CL ended the week in an uptrend in all 3 timeframes. That pesky 200 MA is still acting as resistance for crude – it has tried for 5 days to move above it but so far, no luck.

The EIA report on Wednesday was quite bearish: crude: +7.9m, gasoline: -2.8m, distillates: -0.6m. Crude sold off hard ($1.40) immediately following the report, and closed at or near the daily low, but managed to bounce back by end of week. 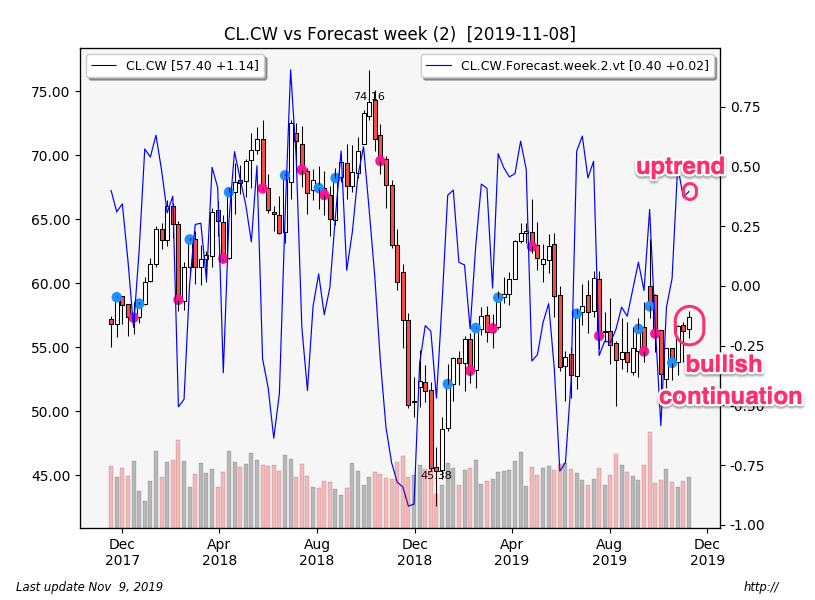 * Premium for physical (via Bullion Vault: https://www.bullionvault.com/gold_market.do#!/orderboard) vs spot gold (loco New York, via Kitco: https://www.kitco.com/charts/livegoldnewyork.html) shows no premium for gold, and a 7 cent premium for silver.

Gold and especially silver had the worst week in years, with silver hit particularly hard. Both gold and silver hit new lows (lower high + lower lows = downtrend); this pattern looks pretty similar to what is happening in the 10 year bond as well.

The current set of economic reports do not show any worsening in the US economic picture. While growth remains anemic, the US has yet to actually enter recession – at least, not according to the indicators I follow.

The yield curve has recovered back to “normal” again, mainly because of the huge plunge in the 10 and 30 year bonds. One of the drivers for this is the Fed: Wolf Richter had a helpful piece explaining that the Fed continues to shed long-duration bonds, and is buying shorter-term T-bills to replace them. So short term debt rallies (or rather, falls less, because of the Fed’s purchasing) while long term debt plunges. So – no more inverted yield curve. You might call it “operation un-twist.”

As I said earlier, I’m convinced that the climbing OI at a time when the gold price has topped out and is declining suggests a sustained campaign of official intervention to drive gold prices lower during a time of relatively good news – from the US China trade deal. We are seeing bond prices drop too, so there is a natural pressure on prices to move lower, but the piling in of the shorts right now is historically unique.

The good news for goldbugs is that the miners are whispering in our ears not to worry. At least, not to worry too much. While gold has made new multi-month lows, and silver looks quite ugly, the miners have not declined all that far. They remain in a longer-term uptrend.

The COT reports show little change this week. I’m not sure the COT report analysis works any longer. And for that, I blame official intervention.

And given just how enthusiastic Trump is about a rising stock market (he treats it as his “grade” as President), and how gold tends to be a risk-off asset, and how these historical correlations feed into the various models (mine included),  it makes a certain amount of sense to make gold less attractive if at all possible, to signal that “all is well, put your money in stocks.” Chris has been saying this for years, but under Trump it is now quite overt: the stock market is now a key metric for “the President doing a good job.”

[And if you wanted him gone…what could you do that might be more effective than “faux impeachment”?  Given how strongly the banksters are for HRC…she comes already pre-bribed via Clinton “Foundation”, and is also the clear favorite of the Deep State due to…well certainly not Epstein, ok, maybe Epstein, she never saw a war she didn’t like…hmm…engineering a market crash might just be what the DNC has ordered up, say early-2020…HRC is begged to enter the race by the talking heads in the DNC/MSM and promises a return to the status quo.]. 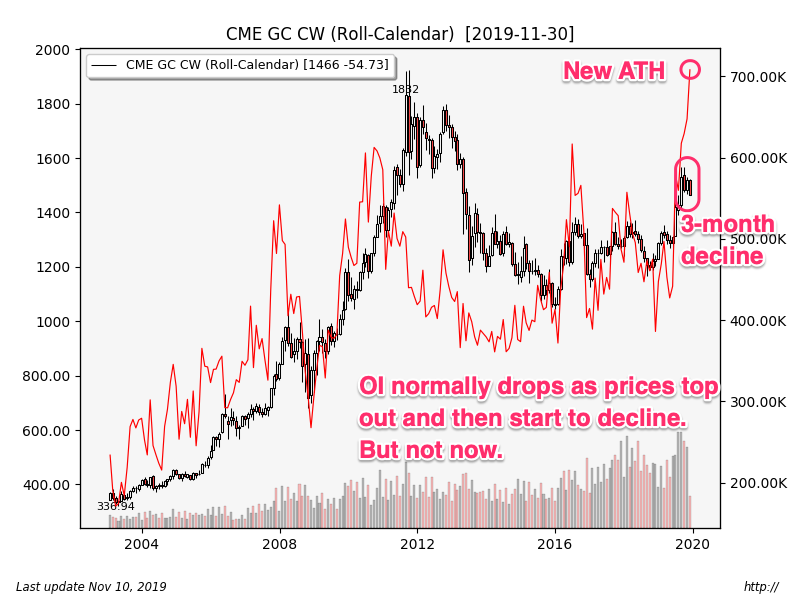 The weekly trends (below) are a picture – more or less – of risk on/happy US-China trade news.

What’s wrong in the financial world with the longest expansion in history and the Fed starting QE (money printing) again? Griffin says, “We are living in a system of the banks, by the banks and for the banks, and that is the reality. . . . They see that the wheels are coming off. . . . The system of inflation in which we live cannot go on forever. . . . All systems of exponential growth always collapse. They come to an end at some point, and it’s hard to tell exactly at what point, but you do know there is a breaking point where it just moves beyond reality. The banks know this better than anybody. So, I am assuming that they feel they are at the end. You can smell it. You can see it. You can touch it almost. So, what do you do? . . . I think their thinking is, hey, we are at the end and let’s just grab all we can so when the system collapses, we will be okay. That is kind of a crude way of putting it, but I think they are going for broke because they know it is broke, and there is not much they can do about it.”

So, what’s the plan by the bankers? Griffin says, “I think I know. They are waiting for the big collapse to come. They will personally be okay because they will have amassed hard assets. They are trying to hold all the gold, all the silver, all the real estate and all the stuff that has value. They want all the tools, factories and food supplies, but everything else, based on numbers, paper and debt, that will collapse. So, they will be able to pick up everything for pennies on the dollar.”

Very interesting take on Trump at 22 minutes.  Worth a listen.