PM Sector map shows a bit of a mixed bag; miners led metal higher, juniors led seniors higher, but gold led silver, which isn’t ideal. Platinum was at the bottom of the pile, along with the other more industrial metals. Many of the PM (safe haven) components have moved back above the 9 MA lines, and gold is back above all 3 moving averages. The sector map is hinting that the recent PM correction might be over.

Gold rose +7.09 [+0.47%] to 1514.12. The high wave candle was bullish (49%), but forecaster declined, and moved in a downtrend. Gold’s daily reversed back into an uptrend on Wednesday, which leaves gold in an uptrend in both daily and monthly timeframes. Gold/Euros did even better, ending the week in an uptrend in all 3 timeframes.

Commercial net jumped +41k contracts, which was all covered shorts; managed money net dropped -47k contracts, which was almost all about long liquidation (-46k). There were two large down days during the coverage period – it looks like managed money panicked out, and commercials rang the cash register – this is normal behavior. This is a positive sign, but from the COT perspective, the move isn’t enough to start thinking about a low for gold just yet. 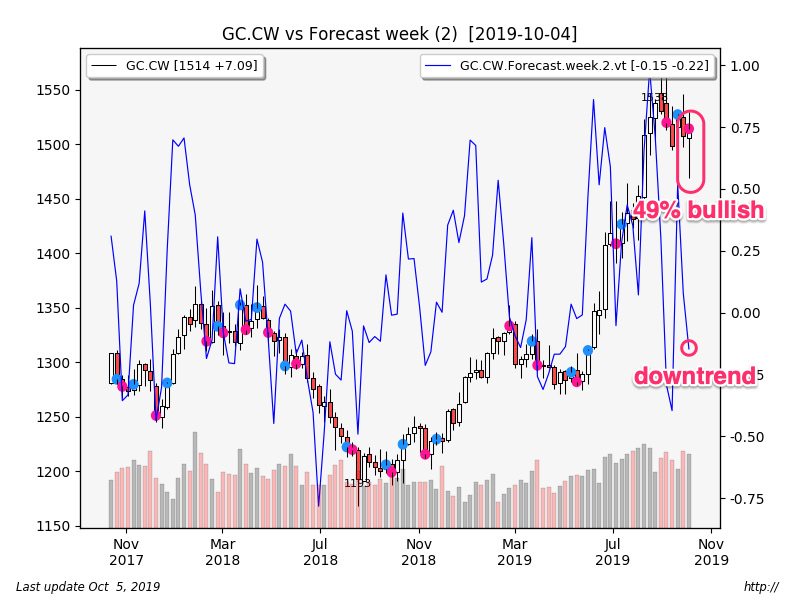 Silver rose +0.01 [+0.06% to 17.64. The doji candle was a bearish continuation, but forecaster moved higher, flipping back into an uptrend. Like gold, silver daily flipped back into an uptrend on Wednesday’s rally. As a result, silver ended the week back in an uptrend in all 3 timeframes – although the trends at this point are not that strong. Silver is definitely lagging behind gold, which is not a great sign for a PM reversal.

Commercial net rose +2k contracts, which was -2.8k fewer shorts, and -850 fewer longs. That’s a tiny change. Managed money net fell -4.7k contracts, which was -3.5k fewer longs and +1.2k more shorts. Silver was hit really hard during the coverage period, but there was little short-covering on the part of the commercials – and not all that much long liquidation by managed money. 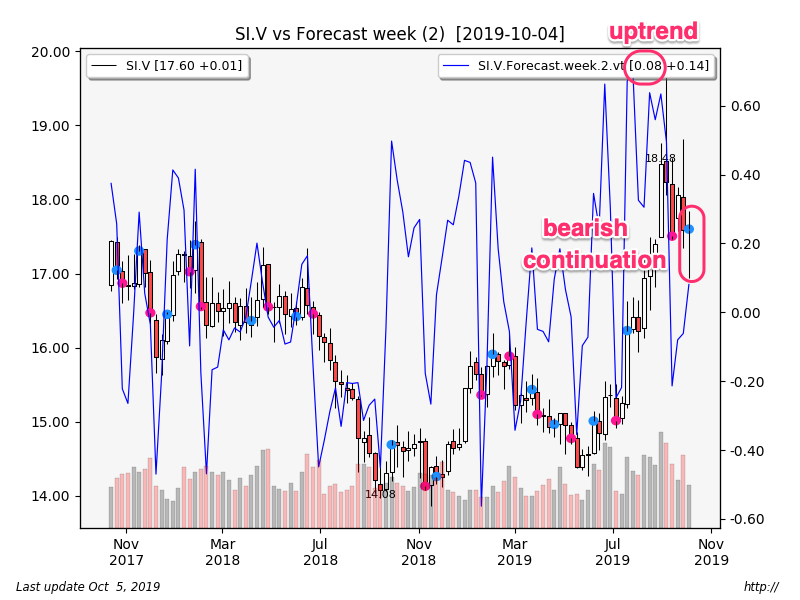 Miners were basically flat; XAU rose +0.04%, the spinning top was bullish (48%), but forecaster moved lower into its downtrend. Still, XAU daily popped back into an uptrend on Friday. That leaves XAU in an uptrend in both daily and monthly timeframes. Both the forecasters, and the charts give you the sense that XAU is lagging behind the metals overall; this is not a great sign for a strong PM reversal. The buyers really haven’t returned to the mining shares just yet. 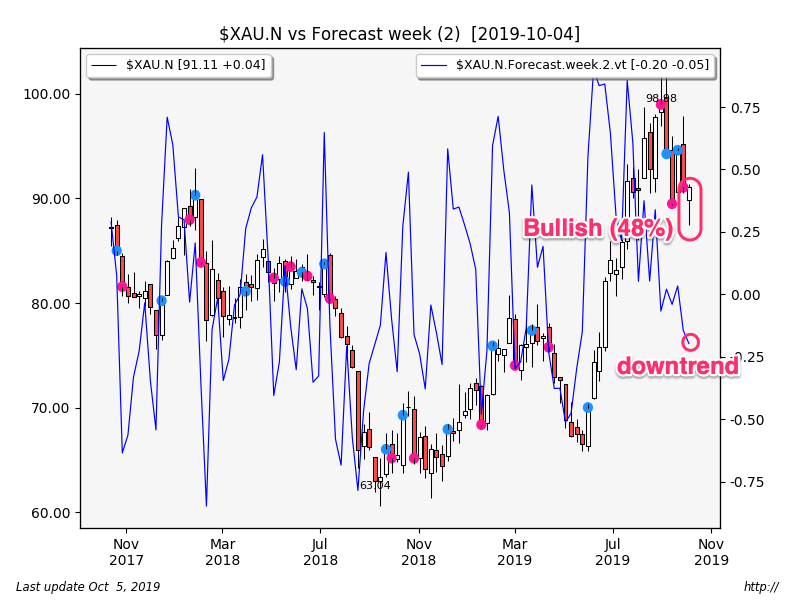 The buck fell -0.31 [-0.31%] to 98.38. The bearish harami pattern was bearish (41%), and forecaster moved lower, but remains in an uptrend. Daily DX forecaster dropped into a downtrend on Thursday; this resulted in the buck ending the week in a downtrend in both daily and monthly timeframes.

I redid the monthly forecaster – it looks to be a bit more accurate now, so I trust the sense it has of a dollar downtrend at this point. I’m guessing the dollar bearishness has to do with the strong rallies in 1 and 10 year bonds. 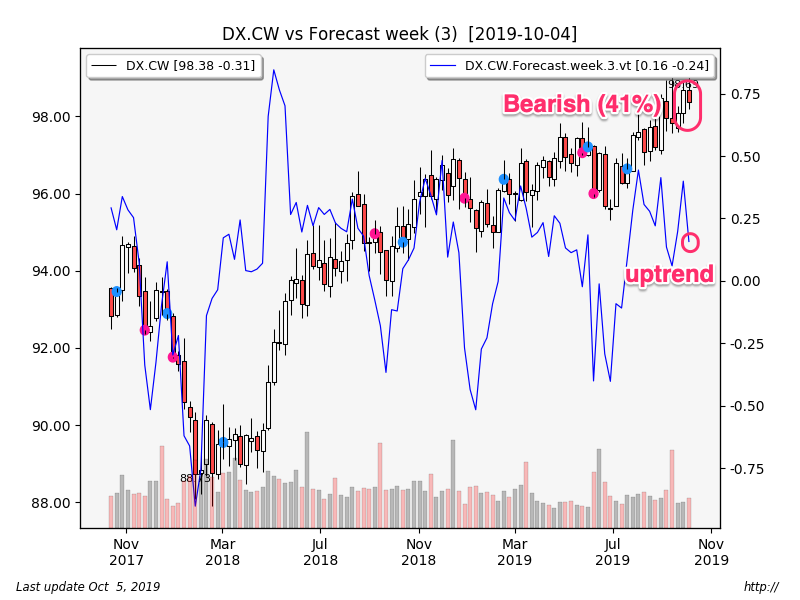 SPX fell -9.78 [-0.33%] to 2952.01. The high wave candle was a bearish continuation, and forecaster moved lower but remains in an uptrend. Strong rallies on Thursday and Friday rescued SPX from what would have been an ugly week. Friday’s (40 point) rally appears to have been sparked by the payrolls report at 8:30 am, which was good for 20 points of the day’s move. Daily forecaster moved back into an uptrend on Friday’s rally. This pulls SPX back into an uptrend in all 3 timeframes, but the trends are all quite weak. 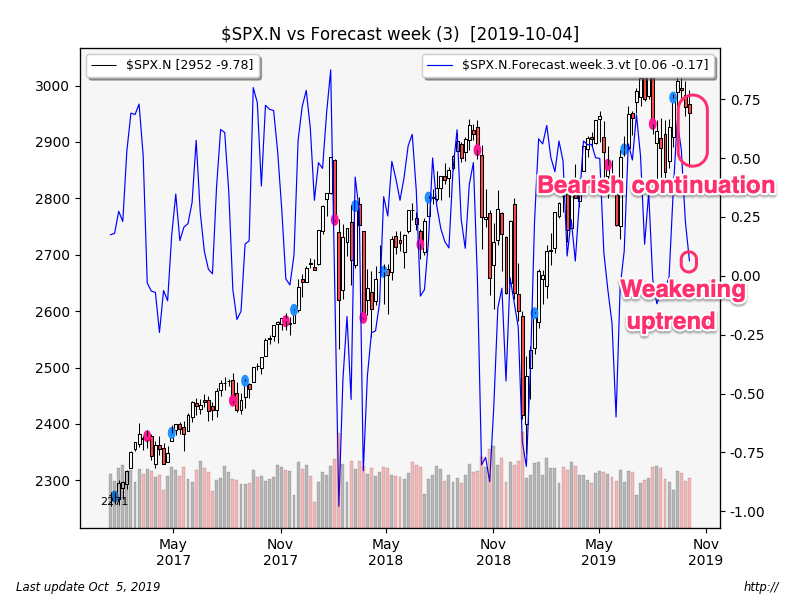 On the week, energy and telecom led the market lower, while tech and sickcare did best. The sectors that fell really did much worse; energy was especially hard-hit. The sector map looks quite bearish, in spite of the minor rally in tech.

The US equity market was #4 of 6 this week; Emerging Asia did best.

TLT climbed +0.59%, making a new high on Friday. The closing white marubozu was a bullish continuation, and forecaster ended the week in an uptrend. The 30-year yield fell -12 bp to 2.02%. That’s a pretty strong move. The all time low yield for the 30 year is 1.96%, which is not very far away at all.

TY rose +1.16%, the long white candle is a bullish continuation, and forecaster jumped back into an uptrend. TY ended the week back in an uptrend in all 3 timeframes.

DGS10, the 10 year yield, fell -16 bp to 1.53%. The black marubozu was a bearish continuation, and forecaster dropped back into a downtrend. DGS10 is back in a downtrend in both weekly and monthly timeframes. The multi-year low in the 10-year is just 1.50%, just 3 bp away. 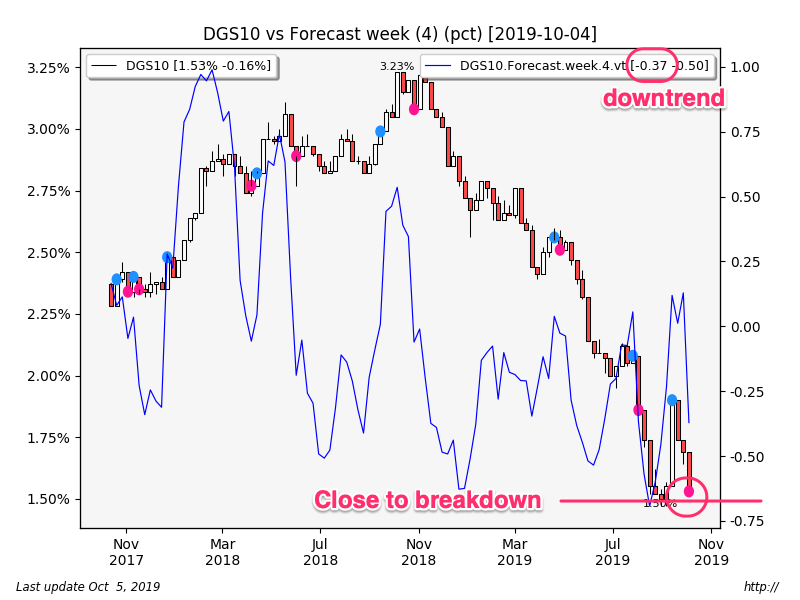 JNK fell -0.91%, falling for the first 3 days, and then rebounding on Friday. The opening black marubozu was a bearish continuation, and forecaster ended the week in a downtrend. That said, Friday’s daily swing low was bullish (50%), so we will have to see how things go come Monday. BAA.AAA differential rose +1 bp to +89 bp. There are still few worries from the credit markets about low quality debt.

Crude plunged -3.18 [-5.67%] to 52.90. The opening black marubozu was a bearish continuation, and forecaster moved lower into what is now a reasonably strong downtrend. Crude did bounce off 51 support on Thursday, and the daily chart swing low print on Friday was quite bullish (57%), but the move higher in the daily forecaster wasn’t quite enough for a daily uptrend. Crude ended the week in a downtrend in all 3 timeframes.

Wednesday’s somewhat bearish-looking EIA report was a part of the problem: crude: +3.1m, gasoline: -0.2m, distillates: -2.4m. This caused prices to drop, certainly, but didn’t account for the bulk of the correction in crude, much of which took place on Monday. 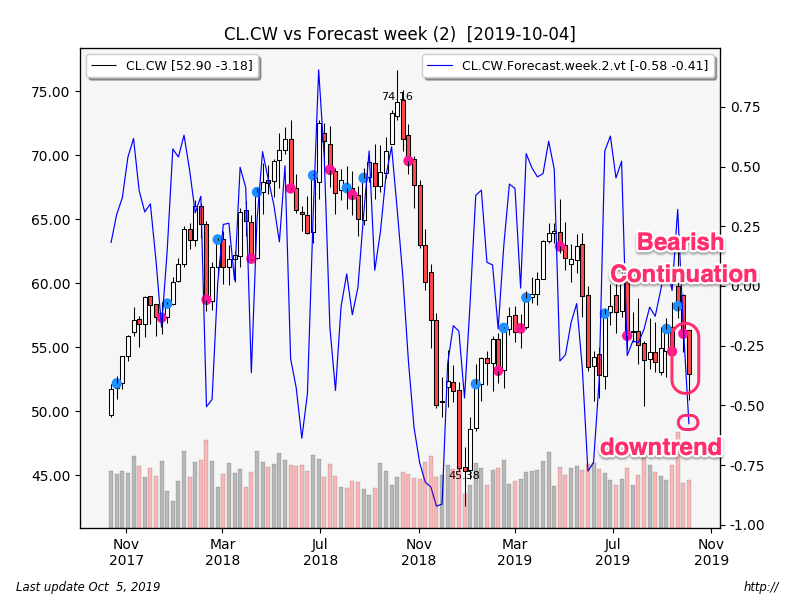 * Premium for physical (via Bullion Vault: https://www.bullionvault.com/gold_market.do#!/orderboard) vs spot gold (loco New York, via Kitco: https://www.kitco.com/charts/livegoldnewyork.html) shows no premium for gold, and a 4 cent premium for silver.

After making new lows on Monday, gold, silver, and the miners all rebounded this week, driving back above the 9 MA lines, and causing the daily forecasters to reverse too. However it wasn’t enough for the weekly to reverse; it is hard to know if this week’s bounce is just a reaction rally or a more substantive reversal. Bonds look a whole lot stronger – the 10-year yield is within 3 bp of its multi-year low, and the 30-year is only 6 bp from its all-time low. If the bad economic news continues to roll in, I’d expect bonds to break to new highs/new yield lows in both the 10 and 30 year durations.

Rate cut chances also continue to increase; a rate cut in October is likely, and there is a decent chance of another cut in December.

So why is gold lagging? It certainly could be suppression, but the larger “open interest” picture hasn’t changed very much at all – OI doesn’t bear out the suppression case. That leaves a lack of interest on the part of the buyers. What might be causing the hesitation?

The Brexit picture looks positive – at least to me – that some sort of resolution will happen in the near future. GBP/USD looks to be confirming this, at least more or less. A resolution to the seemingly endless attempts by the Remainers to avoid a real Brexit will probably end up being somewhat gold negative.

By end of next week we could also get some clarity on the US-China trade deal. Will the Chinese return to the May almost-agreement? Will they return with some tweaks to said agreement? Certainly the Chinese are motivated; 4 months of dreadfully embarrassing Hong Kong unrest, along with a slowing world economy will impact them more seriously than everyone else, and that’s happening alongside an increasing US campaign to make “decoupling” a real thing. The CCP’s actions in Hong Kong no doubt contributes to the increasing “decoupling” sentiment. Perhaps they now think they should strike while there is still an opportunity.  A reasonably successful conclusion to the trade situation would also be gold negative.

Maybe that picture explains why gold buyers are a bit cautious right now, even though rates appear to be on a relentless path lower.

Big bar gold premiums on gold are inching higher, and ETF discounts mostly declined. There is no shortage of gold or silver at these prices.

The COT reports show some cash-register ringing by the commercials in gold, although (in the classic COT model) a lot more of that needs to happen if gold is to put in a low. Silver, well, there was almost no short-covering in silver.

Boy, this was a long time in coming.

Anyone imagine if HRC had made it into office (after all her “speeches”) that her DOJ would have done anything about this?

Notice: individuals have been criminally charged, rather than “organizations”, which suggests to me that the punishment won’t be the usual a fine.  Maybe someone will even roll on someone else.  A guy can hope.  It might even dissuade future scammers.

Looks like a little bit of “banking system” swamp might be getting drained.  Banks are not allies of Trump, so…they are fair game.  Unlike with HRC.

Two current precious metals traders and one former trader in the New York offices of a U.S. bank (Bank A) were charged in an indictment unsealed today for their alleged participation in a racketeering conspiracy and other federal crimes in connection with the manipulation of the markets for precious metals futures contracts, which spanned over eight years and involved thousands of unlawful trading sequences.

“The defendants and others allegedly engaged in a massive, multiyear scheme to manipulate the market for precious metals futures contracts and defraud market participants,” said Assistant Attorney General Brian A. Benczkowski. “These charges should leave no doubt that the Department is committed to prosecuting those who undermine the investing public’s trust in the integrity of our commodities markets.”

“Smith, Nowak, Jordan, and their co-conspirators allegedly engaged in a complex scheme to trade precious metals in a way that negatively affected the natural balance of supply-and-demand,” said FBI Assistant Director in Charge William F. Sweeney Jr. of the FBI’s New York Field Office. “Not only did their alleged behavior affect the markets for precious metals, but also correlated markets and the clients of the bank they represented. For as long as we continue to see this type of illegal activity in the marketplace, we’ll remain dedicated to investigating and bringing to justice those who perpetrate these crimes.”

On one hand, the way to effect change is to go after individuals with criminal charges and prison sentences.  On the other hand, going after a small number of individuals gives the impression the pricing schemes are very isolated instead of being a more systemic problem.