The weekly metals sector map has silver leading gold, with the miners trailing the metals. Many items remain below both the 9 and 50 MA lines. Silver is back above the 9, but gold and the miners are not. Every item remains above the 200 MA, so the long term uptrend remains intact, but the PM group overall remains in correction territory.  [sector map appended in the following post]

This week, gold climbed +1.45 [+0.08%] to 1909.51 on moderately light volume. The doji/nr7 candle was unrated, forecaster climbed, but remains in a downtrend. Gold is in an uptrend in the daily and monthly timeframes.

Gold/euros dropped -17.86 [-1.10%] to 1610.59 on moderately light volume. The spinning top candle was a bearish continuation, forecaster was unchanged and remains in an uprend. Gold/euros is in a downtrend in both the daily and monthly timeframes.

Gold went nowhere this week, while the buck plunged. That’s not a great sign. 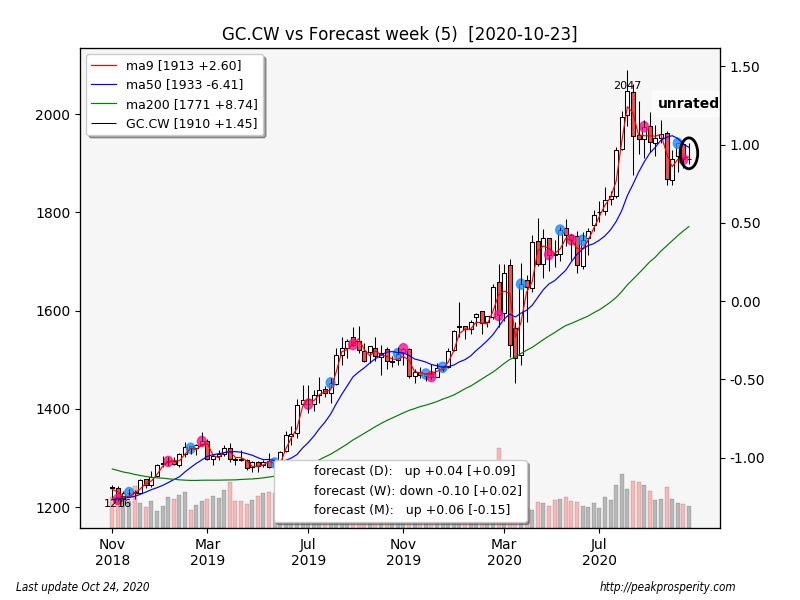 Silver moved higher, up +0.46 [+1.89%] to 24.78 on moderately light volume. The short white candle was unrated, forecaster fell, dropping into a downtrend. Silver is in an uptrend in the daily and monthly timeframes.

There was some additional shorting this week, but the overall OI levels suggest more of a low than a high. Silver is sandwiched between the 9 and 50 MA lines – below the 50, above the 9. The October bounce that has followed the September smash has been relatively anemic. I can see why the weekly thinks we’re in a slight downtrend. 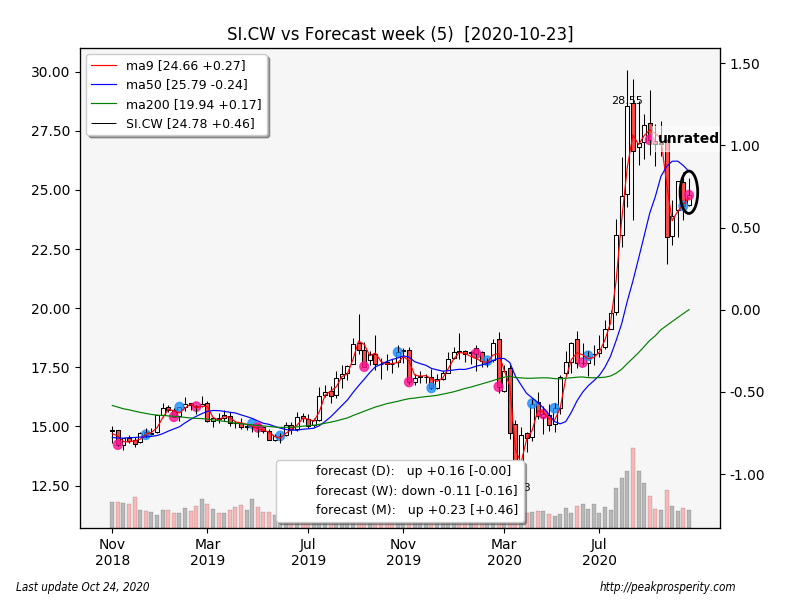 GDX fell -2.54% on moderately light volume, and GDXJ dropped -2.13% on moderate volume. XAU fell -1.11%, the short black candle was a bearish continuation, forecaster dropped, but remains in an uptrend. XAU is in an uptrend in the weekly and monthly timeframes.

Miners faded a bit this week; while they remain in a weekly uptrend, the trend has definitely weakened. XAU is now below both 9 and 50 MA lines. 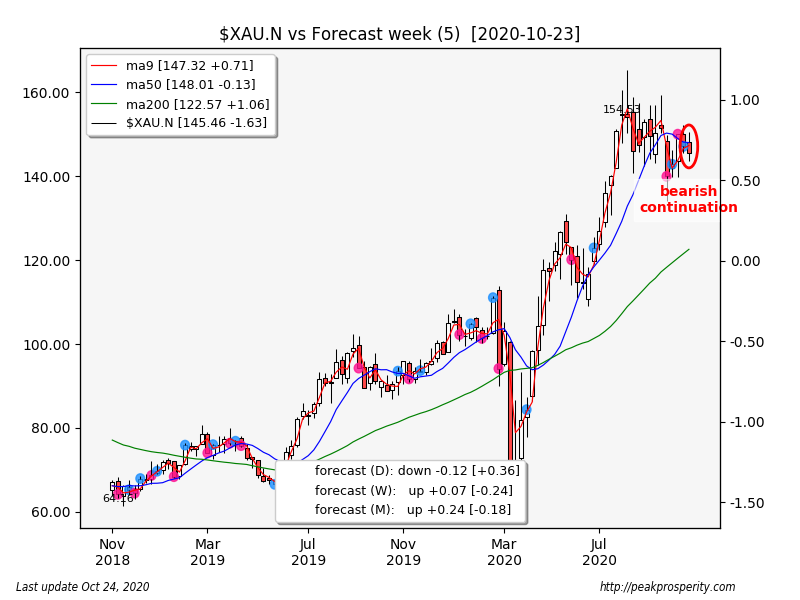 Platinum rose +43.55 [+4.79%], palladium rose +60.66 [+2.51%]. Platinum went sharply against the overall PM trend this week, jumping back into an uptrend. Palladium remains near the recent highs. Both metals looked strong this week.

Copper shot up +0.08 [+2.61%] to 3.14 on moderately light volume. The opening white marubozu is a bullish continuation, and forecaster dropped, but remains in an uptrend. Copper is in an uptrend in all three timeframes.

Copper broke out to a new 2-year high this week. While it ended the week on a somewhat sour note (on Friday copper printed a 3-candle swing high), the weekly still looks good. Copper – and palladium – are the best performing metals in the group. 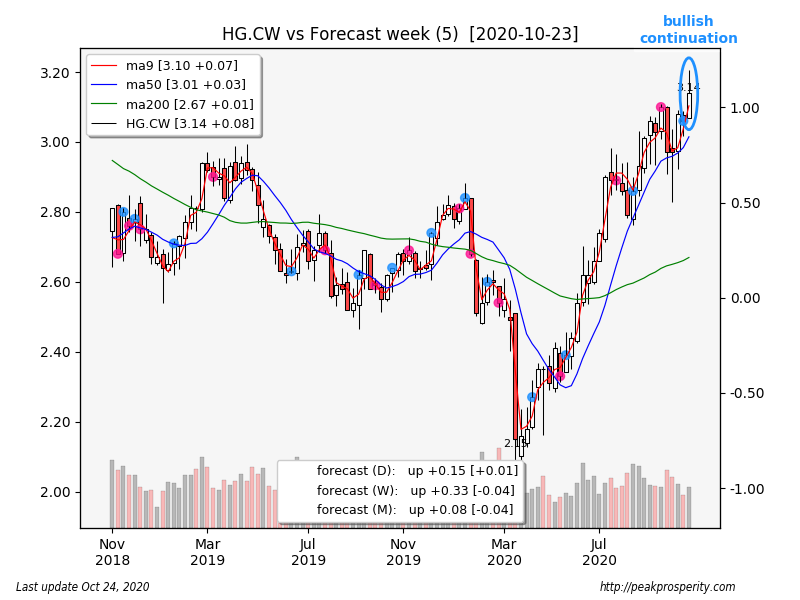 The buck fell -0.92 [-0.98%] to 92.74 on moderate volume. The opening black marubozu candle was a bearish continuation, forecaster dropped, but remains in an uptrend. The buck is in an uptrend in the daily and weekly timeframes.

It was a reasonably ugly week for the buck, which fell 4 days out of 5. While the daily looks somewhat positive, the weekly looks as though the buck may be headed for a re-test the lows. 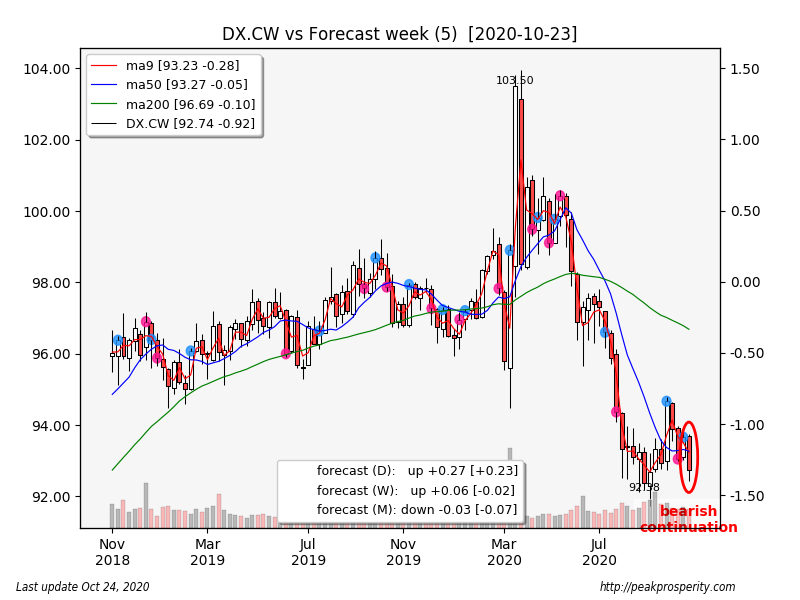 Crude plunged -1.20 [-2.92%] to 39.83 on moderately light volume. The closing black marubozu candle was a bullish continuation, forecaster dropped, but remains in an uptrend. Crude is in a downtrend in both the daily and monthly timeframes.

Crude printed a failed rally this week; on Monday, it ran into resistance above 41, and spent the week slowly selling off. That 41 resistance looks reasonably strong. There is no clear direction yet for crude, although it feels a bit bearish to me. 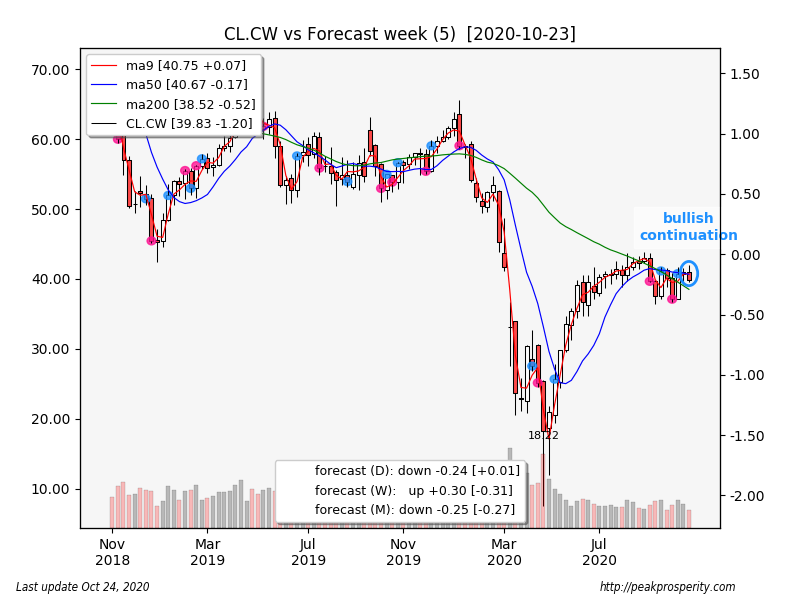 SPX fell -18.42 [-0.53%] to 3465.39 on moderate volume. The spinning top candle was a bearish continuation, forecaster dropped, but remains in an uptrend. SPX is in an uptrend in all three timeframes.

SPX seemed to find support at the 50 MA this week; it is back in a (daily) uptrend. The MA5 of the NYSE advance ratio is only 52, however, so things still look a bit bearish. 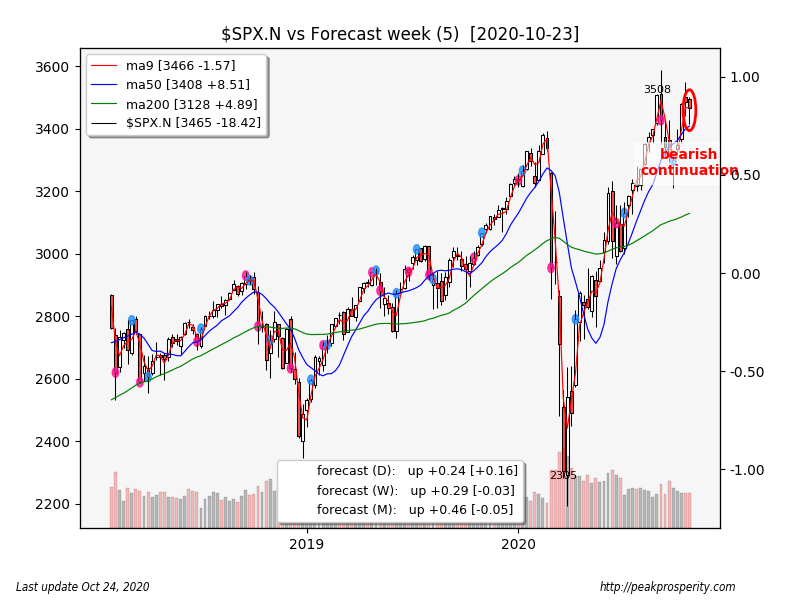 The 10-Year yield rose +8.0 bp to +0.84%. The long white candle was a low-percentage bearish reversal (28%), forecaster climbed, moving higher into its uptrend. The 10-Year yield is in an uptrend in the weekly and monthly timeframes.

Bonds did poorly this week, even with the Fed buying $25 billion. DGS10 (10 year yield) managed to close above the 200 MA by just one bp. And this is without any stimulus being passed. 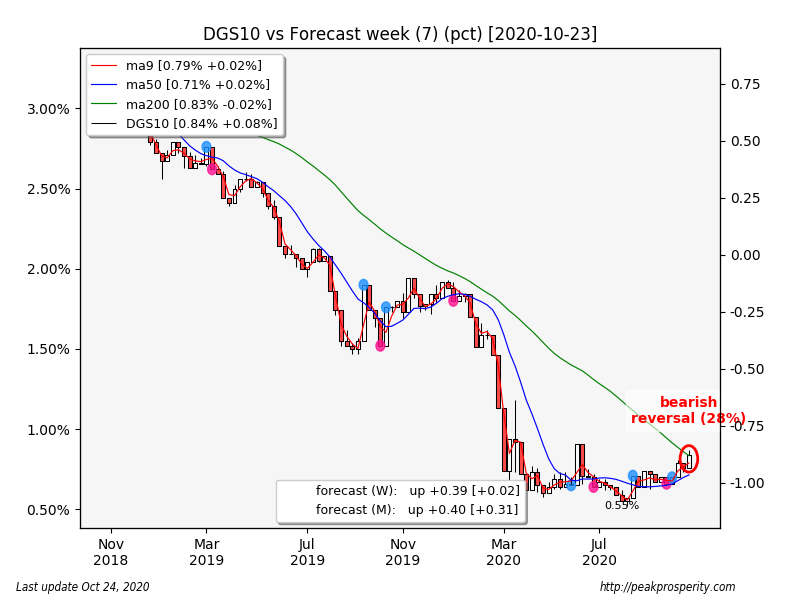 JNK climbed +0.37%. The short white candle was unrated, forecaster fell, dropping into a downtrend. JNK is in an uptrend in the daily timeframe. 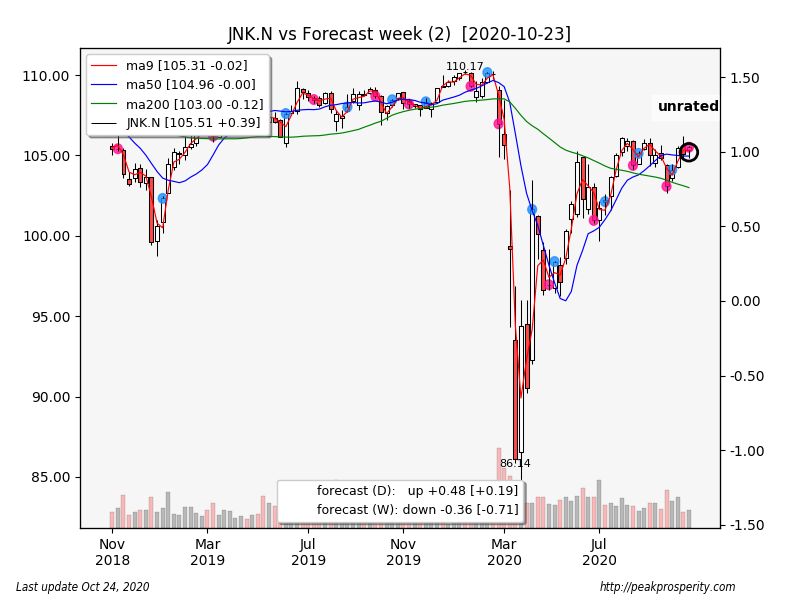 The GLD ETF tonnage on hand dropped -8.76 tons, with 1264 tons remaining in inventory.

Physical ETF discounts have shrunk somewhat, and big bar premiums have expanded, especially for gold. This is starting to look more positive for PM.

This week silver did ok, gold moved sideways, while the miners sold off. And even gold’s horizontal movement came with the help of a plunging US dollar. This sort of performance, in a situation where the buck is heading lower rapidly, is both unusual and bearish. Gold/Euros declined; this chart looks as though gold may be ready to fall through the recent lows set four weeks ago. I wouldn’t be surprised if it did so. Silver looks better, but it would probably be pulled lower too if gold ended up selling off.

The only positive note this week is the increase in premiums for the larger bars.

Risk assets were mixed again; crude fell, as did SPX, while crappy debt moved higher. Copper and palladium both look quite strong. SPX does appear to have found support on the 50 MA.

Stimulus? Probably not gonna happen. So why is the buck tanking? That I don’t know. Money does seem to be fleeing the USD – and the 10-year treasury is a bet on the buck as well as a bet on rates. Money appears to be fleeing treasury bonds also.

So no stimulus is probably the factor affecting PM right now. Can confidence remain in government in the current circumstances? So far, that’s what prices are telling us. Although the move out of the buck, and out of treasury bonds is suggesting that might be changing in the near future.

On that note: in something straight out of “1984”, the FDA approved Remdesivir – which utterly failed to either help survival, or shorten recovery time of those who avoid death in its massive WHO-run clinical trial. The apparently useless drug will cost the fortunate US patient community $3000 per treatment. [US sickcare system: 20% of GDP]

[Remember: the WHO-run trial on HCQ was used by nations around the world to make HCQ illegal for treatment for COVID-19. “Some animals are more equal than others.”]

The $20 competitor, hydroxychloroquine, has been given the fisheye by that same FDA. Apparently, HCQ remains very scary – way too scary to use for COVID.

Even though millions of lupus patients have been using HCQ for decades worldwide without harm, and there is a ton of evidence HCQ is effective in low doses when given early in the outpatient setting, it turns out, that’s not enough to convince FDA. Yale epidemiologist Harvey Risch explains why. [Spoiler alert: it is all about the money.]

When cheap and effective treatments are forbidden, while expensive and useless treatments get approved, all in the middle of a pandemic, you know for certain that the Fourth Turning is truly upon us.

We can only rely on ourselves, and our tribe.

Cover Up: Fauci Approved Chloroquine, Hydroxychloroquine 15 Years Ago to Cure Coronaviruses; “Nobody Needed to Die”

Oz Update:  Overall stuff is still moving sidewise looking for a signal to break up or down with the ASX 200 (up 0.04%), AUD/USD (up 0.77%), Silver (up 1.04%) and Gold (down 0.73%) all showing a bit of volatility but it was all pretty unconvincing.  Gold made a move up…. then fell back.  The ASX 200 tested and broke it’s recent highs but then just bounced around after it’s strong run up in prior weeks.  I’m wondering if this level is support or resistance?    The only one showing some good recent upward movement is Silver after the plunge in Aug then again in late Sept…. but it still has a long way to go to reach those Highs.

Physical Premiums & Availability: Availability is still good with product available in most forms and sizes. The Premium on Retail silver is still very high but has come down since last week.  I do worry that anyone stacking silver misses the fact that with premiums so high it will take a very big move to cover that spread to make a profit.

Other news:  We had a week off from China banning/tariffing anymore of our exports!

I get the feeling everyone is just waiting for the next shoe to drop.

Has anyone here ever looked at charts of Gold priced in BTC? Which asset has the better outlook going forward?

Here’s a chart of gold priced in shares of SPX.  Looks pretty ugly for gold. 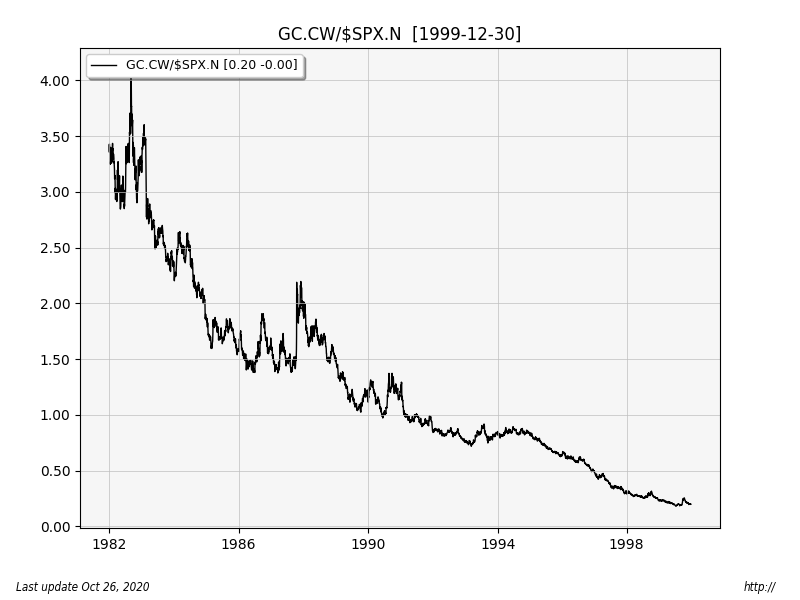 And here is gold priced in bitcoins.  Might this be the low in the ratio?  You tell me.  The contrarian in me says that gold is probably a buy here.  After all, we’re supposed to “buy low, sell high.”  Right? 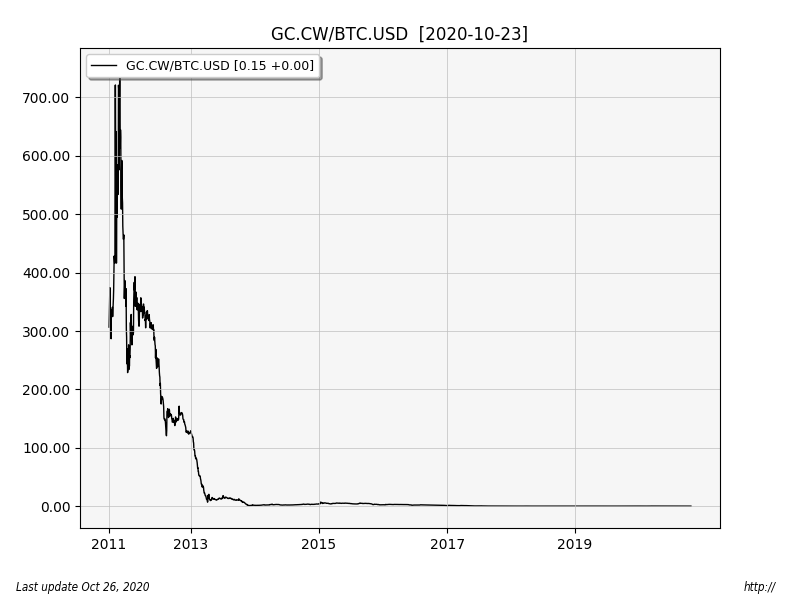 What your Gold/BTC chart indicates is that BTC is demonstrating its asymmetrical upside. For gold to rise relative to BTC, either gold has to rise in dollar price many-fold (far beyond the 2x-3x most analysts I’ve read indicate could be in the cards), or BTC has to collapse far more than it’s going to if it follows the pattern established over the last 3 4-year cycles.

IMO, gold is certainly still a good buy to hedge the dollar; the dollar’s going to decline over the next 24 months. Similarly, BTC is a good hedge on the dollar – with the added benefit of growing even faster because the scarcity effect of BTC vs. the expanding dollar supply about to hit the market will push the coin price up dramatically over the coming 18 months. Look for 5x-10x.

After that run-up, BTC will probably decline 60% or so over the subsequent 18 months, and then stabilize about half way between the high and low over the period of a year or so before the 2024 halving, when the cycle will repeat (if history is prologue).

You might appreciate this article (and very well might understand it more thoroughly than I do given your background): https://medium.com/@100trillionUSD/bitcoin-stock-to-flow-cross-asset-model-50d260feed12

This chart correlates BTC’s price to ounces of gold (from Oct. 19). 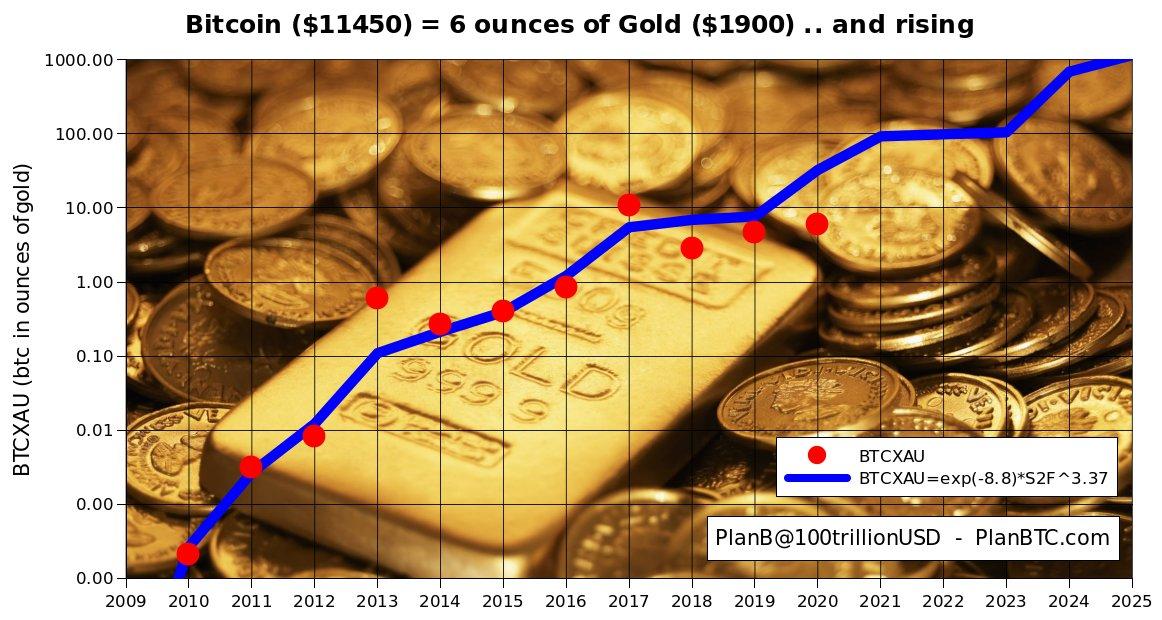