While on Friday the UK and the EU agreed to a deal, on Saturday the UK Parliament moved to “withhold approval” of the deal until legislation implementing it passes Parliament. The motion was approved it by a vote of 322-306. This, in conjunction with the Benn Act, required Johnson to send a letter to the EU requesting an extension. Johnson did so, did not sign the letter, and also sent a second letter, this one signed by him, saying that he believed an extension would be a mistake. The EU is reportedly studying the situation but has yet to respond.

The weekly metals sector map has palladium in the lead (the only metal to be above all 3 moving averages), copper, the miners, and gold all made minor gains, while platinum and gold/Euros fell. It was a bit of a confused picture this week – but the plunge in gold/Euros tells us that gold’s gain was just a positive currency effect, and that gold actually had a bad week.

Gold rose +0.98 [+0.07%] to 1497.96. The doji/NR7 candle was unrated, and forecaster rose just enough to pull gold into a very faint uptrend. Gold ended the week in an uptrend in all 3 timeframes. That said, gold/Euros looks much less positive; gold/Euros made a new multi-month low this week, and it ended the week in a downtrend in both daily and weekly timeframes – and the monthly is right on the edge of a downtrend also. It appears that all the positive news on Brexit is problematic for gold across the pond.

Commercial net rose +23k contracts, which was all short covering. Managed money net fell -25k, which was -18k long liquidation, and +6.7k new shorts. It is good to see the commercials ringing the cash register on the decline; the more they do this, the sooner the correction will be over. 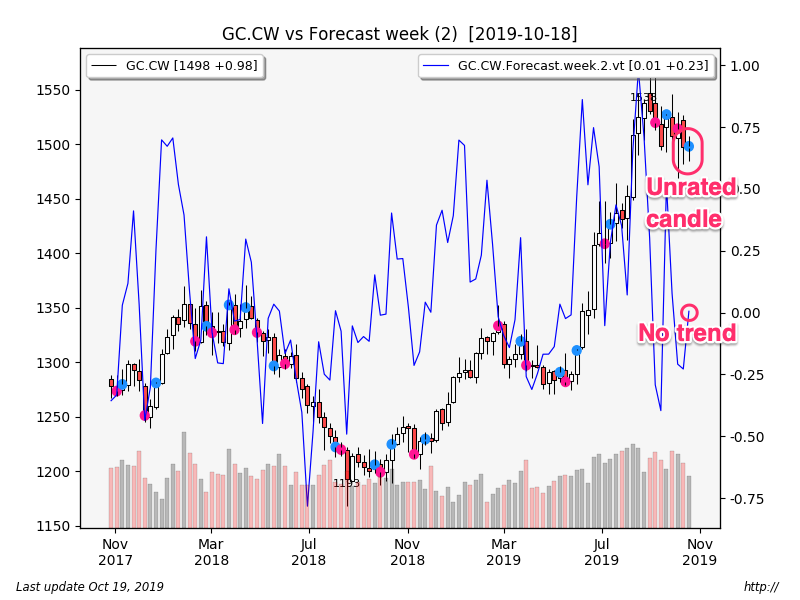 Silver rose +0.01 [+0.06% to 17.64. The doji/NR7 candle was unrated, and forecaster jumped higher into an uptrend. Silver ended the week in an uptrend in all 3 timeframes, but the shorter-term trends are fairly tentative. 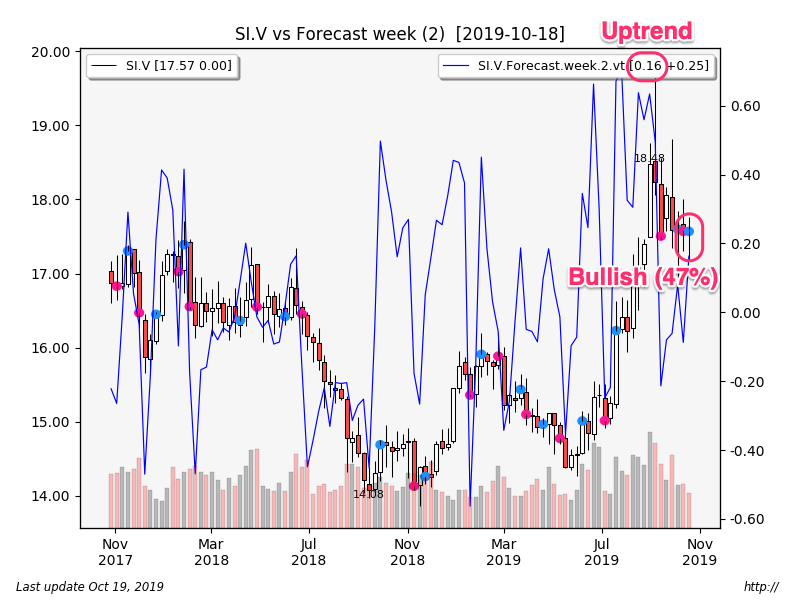 Miners rose +1.81% on the week. The spinning top candle was a bearish continuation, and forecaster inched higher but remains in a downtrend. XAU ended the week in an uptrend in both daily and monthly timeframes. However, on Tuesday it broke down to a new low, which continues the downtrend pattern of “lower highs and lower lows.” This is a bearish sign longer term. 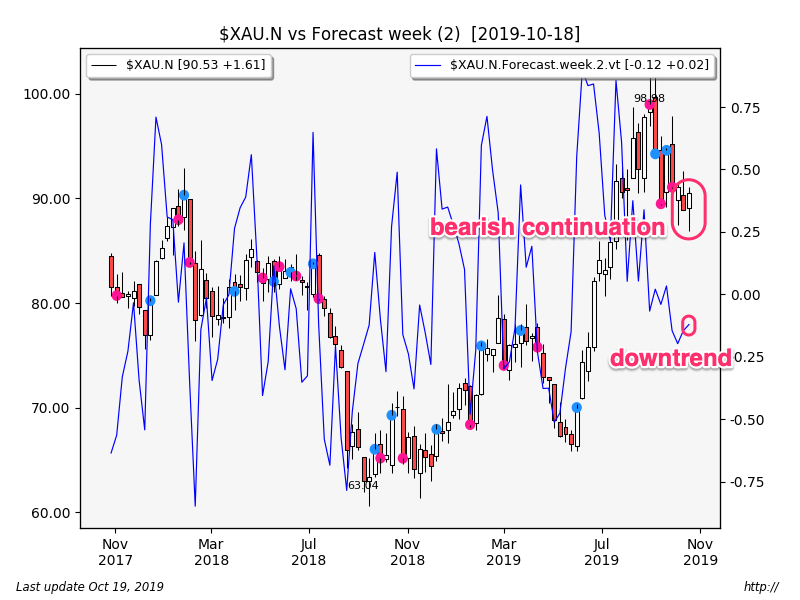 The buck fell -1.02 [-1.04%] this week to 96.85. The buck dropped 4 days out of 5, breaking down to a new multi-month low just on Friday. The long black candle was a bearish continuation, and forecaster dropped hard, falling into a fairly strong downtrend. The buck ended the week in a downtrend in all 3 timeframes. 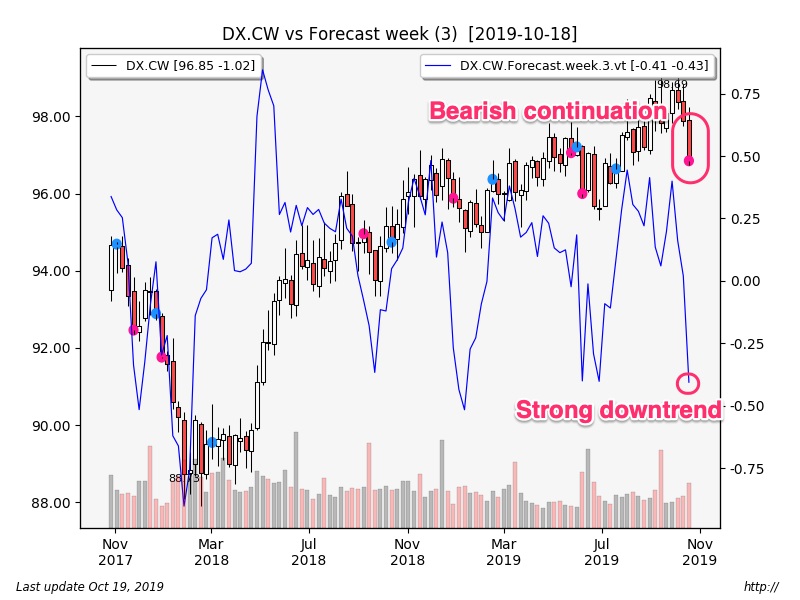 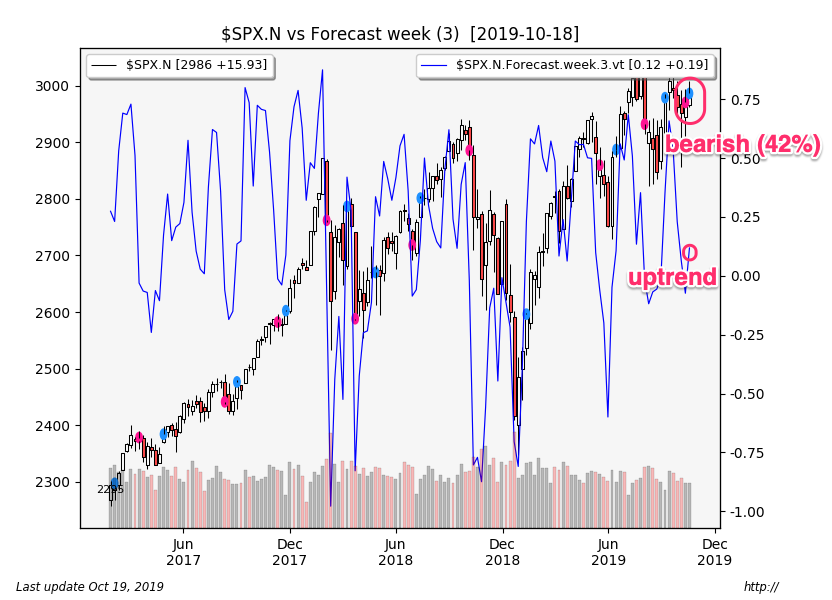 This week, homebuilders and sickcare did best, while defense and energy fell. This was a mixed sector map.

The US equity market was in the middle of the pack this week; Eurozone did best. Likely that’s about Brexit too – like gold, the Euro, and GBP.

TLT fell -0.61%, the short black candle was unrated, and daily forecaster moved higher but remains in a downtrend. with the forecaster ending the week in a downtrend. Most of the damage happened on Thursday and Friday. The 30 year yield rose +3 bp to 2.25%. The pace of the decline in the 30-year slowed substantially this week.

TY dropped -0.11%, the high wave candle was a bearish continuation, and forecaster inched lower but remains in an uptrend. TY ended the week in an uptrend in weekly and monthly timeframes. 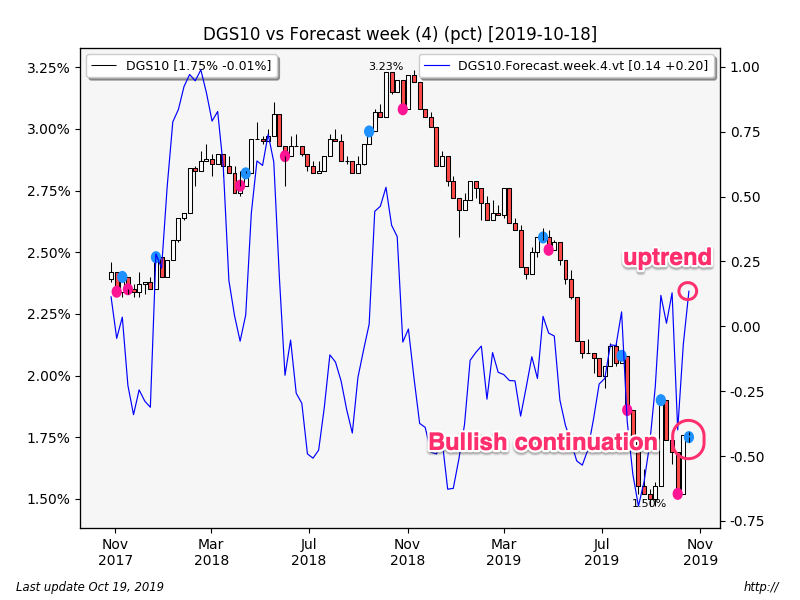 JNK climbed +0.36%, ending the week in a strong uptrend. BAA.AAA differential was unchanged at +93 bp. There are still few worries from the credit markets about low quality debt.

Crude fell -1.14 [-2.07%] to 53.80. All of the losses came on Monday. The spinning top candle was bearish (42%) but forecaster moved higher, just enough for a very faint uptrend. Crude ended the week in an uptrend in both daily and weekly timeframes.

The EIA report on Thursday was bearish; crude: +9.3m, gasoline: -2.6m, distillates: -3.8m. Surprisingly, crude actually rallied following the report – but the rally might have been driven by some other news. 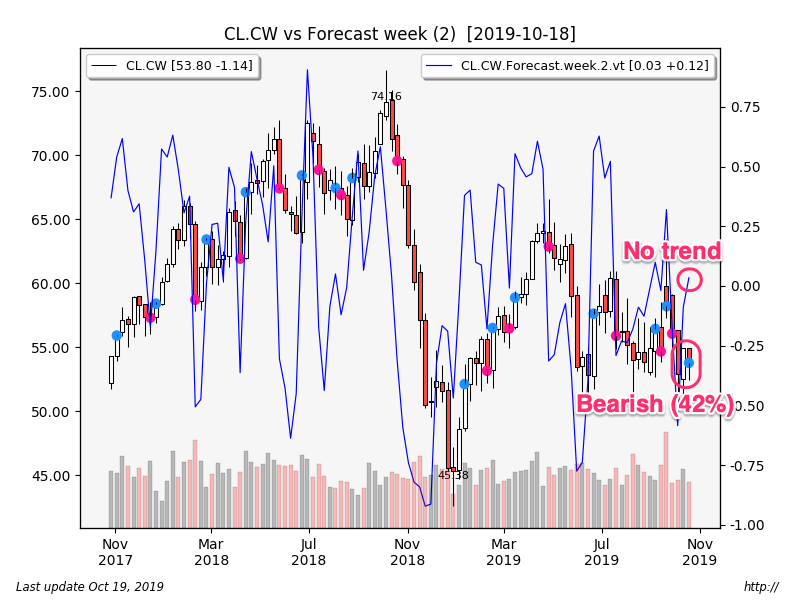 * Premium for physical (via Bullion Vault: https://www.bullionvault.com/gold_market.do#!/orderboard) vs spot gold (loco New York, via Kitco: https://www.kitco.com/charts/livegoldnewyork.html) shows a $2 premium for gold, and a 3 cent premium for silver.

This week the primary driver was the progress, and eventual signing of another withdrawal agreement between the UK and the EU.  This resulted in a sharp drop in the buck, along with a drop in gold/Euros due to all the relief from the markets.  However on Saturday, the UK Parliament failed to pass the Johnson withdrawal agreement, and what happens next remains very much up in the air.  In all likelihood, some chunk of last week’s GBP/USD rally will be unwound on Monday.

Recession indicators continue to appear; both INDPRO and RETAIL were negative, and that’s clearly recessionary – but we really need 3 quarters of that to even start thinking about an actual GDP recession.  The market didn’t like the bad retail numbers, but it ignored industrial production.

Big bar premiums on gold and silver have changed little, and ETF discounts have mostly dropped. There is no shortage of gold or silver at these prices.

The COT reports show some cash-register ringing by the commercials in gold. We need to see a lot more of that before a COT low gets made in either gold or silver.

The continuing uncertainty surrounding Brexit should be gold positive, at least on Monday anyway. Where things end up by October 31 is … really anyone’s guess.  I really thought they’d vote for Johnson’s deal.

Kyle Bass and Gen Spalding interview is worth a watch. Both of course talking their own books, one literally, but interesting. I think China has a big incentive to support North Korea. It keeps the US and allies fixated on a country that doesn’t matter all that much (other than they are capable of nuking Japan etc.) and not on China. It wouldn’t surprise me at all for china to punish the US by either overtly or covertly supporting NK.

The last line of that article you posted, Dave…. It’s not clear why NK has regressed so much in the last few months (perhaps China, not getting a trade deal is covertly throwing support i.e tech, engineers, etc. behind NK developing additional munitions is why) as a way of punishing US and it’s allies. Something along the lines of “see, the US cannot protect Japan, they can’t even denuke NK and that’s your biggest threat”.

I saw the Bass-Spalding interview.  Worth watching.  I could say more – but probably best to just watch the interview.

I agree about the NK regression.  I suspect they are being used as a stick by China to beat Trump with.  If Trump had gone along with the program, a “diplomatic solution” with NK would be his reward.  But not now.  After all he has done with Huawei, the Xinjiang sanctions, the whole “support Hong Kong” theme from the Congress – it seems as though it is time for them to pull the North Korean lever.

I think the “phase one” trade deal was just to get Trump to back off the latest tariff escalation, and to try to help reassure US companies that they don’t need to flee.

I think they’d much prefer for Trump to be hustled out of office in 2020.  His tariffs have been far too effective at getting US manufacturing to leave China.

I also don’t think there will ever be a “phase two” trade deal.  Just my sense.  I think the US move down the “decoupling” road is just going to get stronger as time passes.

The actions of the CCP in Hong Kong has managed to unify both parties.  At some point, money will stop buying passivity.  I mean, when AOC and Ted Cruz agree that the NBA were spineless cowards (“Black Lives Matter” – but, apparently not “Asian Lives in Hong Kong”) … holy crap.  Is that a turning point or what?