Market-moving news on Friday was the announcement of a “phase one deal” between the US and China: China has agreed to eventually buy more US ag products, has agreed to some IP measures, financial services, and currency, and in exchange Trump will delay the 25% tariff increase set for October 15th.

The weekly metals sector map shows the industrial metals doing best; this looks like the by-now-familiar “good news in the US-China trade war” move.  Miners led lower, but with silver outperforming gold. It is a somewhat confused picture – silver doing better than I would have expected – but all PM components are below both 9 and 50 MA lines, which indicates a downtrend. 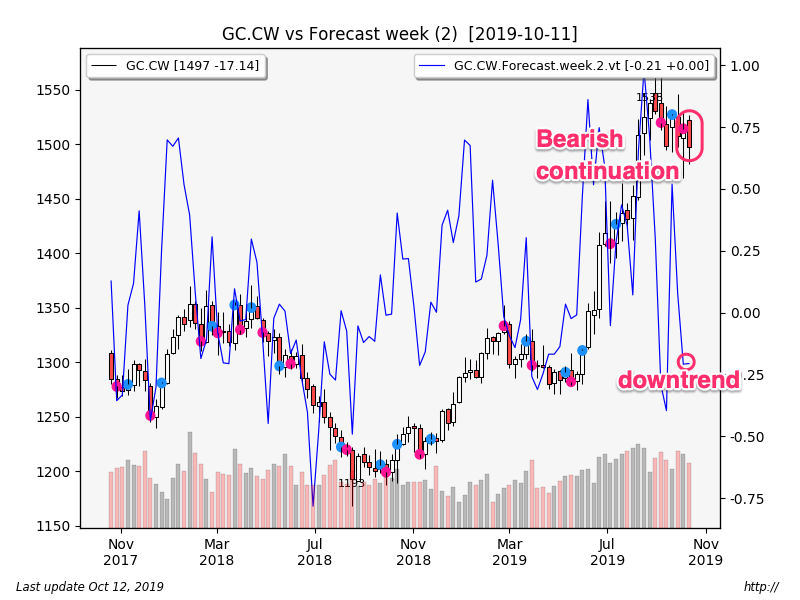 Silver fell -0.03 [-0.17%] to 17.57. The high wave candle was unrated, and forecaster fell, dropping into a weekly downtrend. Silver ended the week in a downtrend in both daily and weekly timeframes. 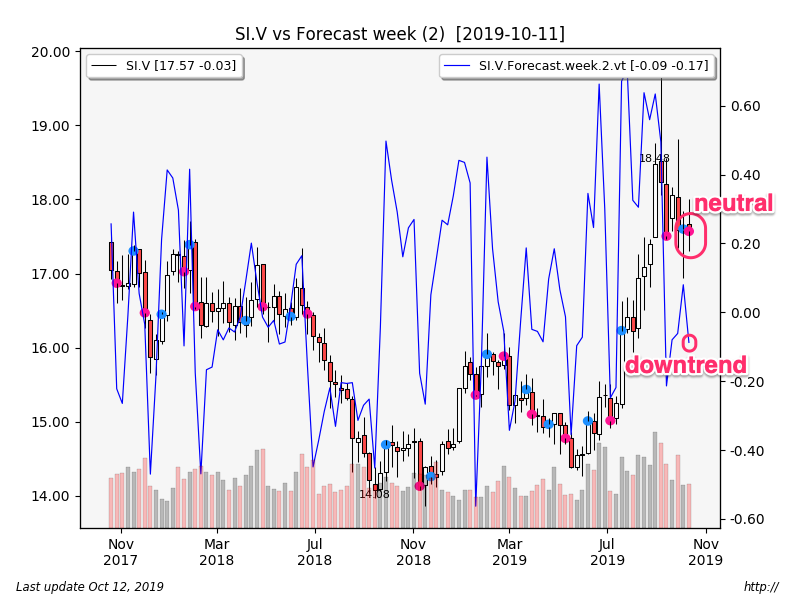 Miners fell -2.40% this week, with all of the damage happening on Friday. The spinning top candle was bearish (42%) and forecaster inched higher but remained in a downtrend. Friday’s big drop suggests yet another lower high is forming, which is bearish. XAU remains in a downtrend in both daily and weekly timeframes. 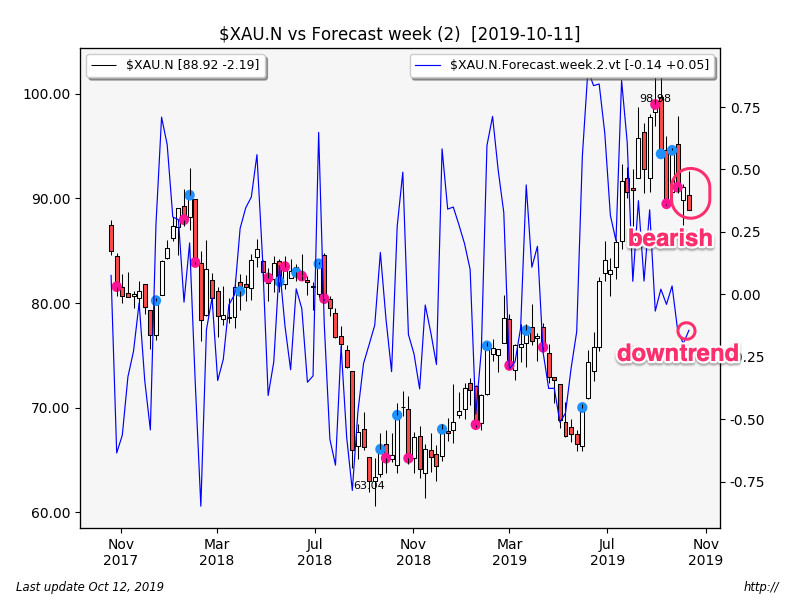 The buck fell -0.51 [-0.52%] this week to 97.87, with the big moves taking place Thursday and Friday. The swing high print was quite bearish (72%), and forecaster moved lower, but remains in a slight uptrend. DX remains in a downtrend in both daily and monthly timeframes. 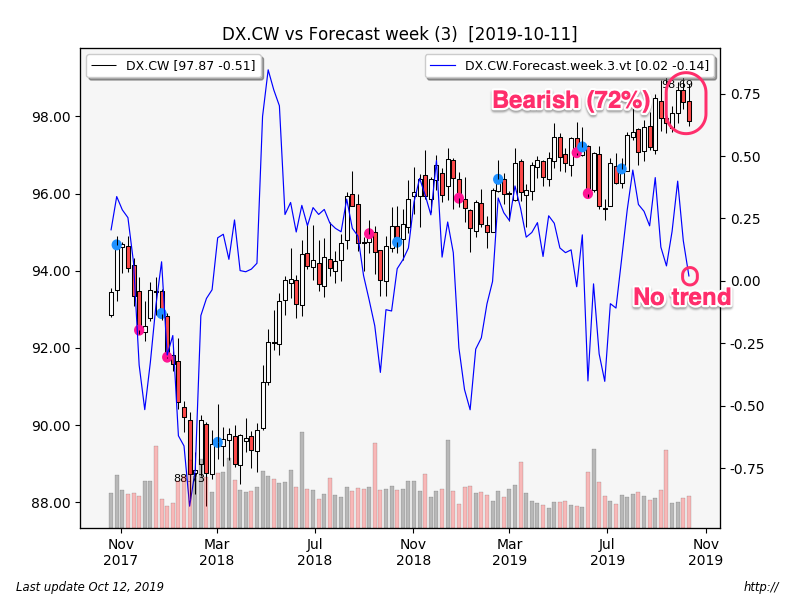 SPX rose +18.26 [+0.62%] to 2970.27. It was a very choppy week, with Friday’s rally accounting for all the gains. The spinning top candle was neutral (actually: both bullish and bearish), and forecaster moved lower, just enough for a slight downtrend. SPX ended the week in an uptrend in both daily and monthly timeframes.

This week, materials and industrials led higher, while utilities and staples did worst. This was the classic “positive US-China trade” sector map.

The US equity market was dead last this week; Eurozone did best.

TLT plunged -3.80%, with the forecaster ending the week in a downtrend. Most of the damage happened on Thursday and Friday. The 30 year yield jumped +21 bp to 2.22%.

TY fell -1.28%, the bearish engulfing was actually a bullish continuation, and forecaster inched higher, remaining in an uptrend. However, this week’s drop pulled the monthly into a downtrend. TY ended the week in a downtrend in both daily and monthly timeframes. If it holds through end of month, this will be the first bearish reversal for TY on the monthly chart for the past 10 months.

DGS10, the 10 year yield, rose +24 bp to 1.76%. The bullish engulfing candle was a bearish continuation, and while forecaster jumped higher, it remains in a downtrend. DGS10 remains in a downtrend in both weekly and monthly timeframes. While it appears that 10-year bond futures (TY) are reversing, the much longer-lived yield series (DGS10 dates back to 1962) is not on board with that reversal just yet. 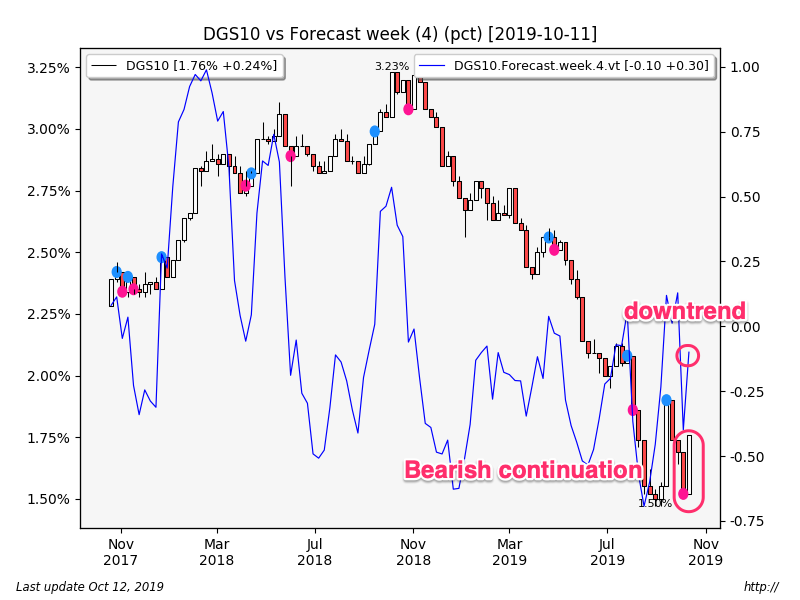 JNK rose +0.36%, and ended the week in an uptrend. Even so – JNK’s rally off the lows is anemic at best. It is not supporting the risk on thesis much, if at all. BAA.AAA differential was unchanged at +93 bp. There are still few worries from the credit markets about low quality debt.

Crude jumped +2.04 [+3.86%] to 54.94. All of the gains came Thursday and Friday. The long white/NR7 candle was unrated, and forecaster jumped higher but not quite enough to move crude back into an uptrend. Crude ended the week in a downtrend in the weekly and monthly timeframes, but is back in a fairly strong uptrend on the daily.  Crude might be reversing.

The EIA report on Wednesday was mixed: crude: +2.9m, gasoline: -1.2m, distillates: -3.9m. The report didn’t appear to have much impact on prices. Mostly, this week’s rally was about the improved prospects for the US-China trade deal. “Demand in China won’t be crushed after all.” That, plus an Iranian tanker either was hit by missiles, or “suffered explosions”, depending on who you listen to.

* Premium for physical (via Bullion Vault: https://www.bullionvault.com/gold_market.do#!/orderboard) vs spot gold (loco New York, via Kitco: https://www.kitco.com/charts/livegoldnewyork.html) shows no premium for gold, and a 5 cent premium for silver.

There were two big events this week, both of them gold-negative. There is progress on a Brexit deal – at the last minute, which according to Mish and EuroIntelligence, is when EU deals always happen – as well as that “phase one agreement” in the US-China trade negotiations.

I get the sense that some sort of Brexit deal will end up happening. If it doesn’t, Johnson can always just call an election, win it (with or without the Brexit party) and then leave with no deal. That’s a gun to the head of the EU. So with the Irish border issue out of the way, something will get worked out. I suspect this will knock out a number of the Eurozone gold buyers, since this takes a fair amount of the pressure off the German automakers as well as the ECB.

The US-China “phase one” trade deal is not just half a loaf, it is maybe 15% of a loaf. From what I can tell, there is no progress on IP theft, forced tech transfers, or industrial subsidies – all the hard stuff remains unaddressed by this “phase one” deal. And the deal has yet to be actually signed. And all the recent restrictions on China’s tech companies remain in place.

At the same time, avoiding that 25% tariff hit is a positive – or rather, a lack-of-a-negative impact, and it will reduce the expected “cross currents” for the Fed for their October 30th meeting.

The relatively muted response of SPX to the trade deal announcement – it was unable to get back above 3000, and it sold off in the aftermarket too – hints that we might just have a top for equities. I do not think the China deal will get any better anytime soon; I think China’s goal was just to do the minimum required to avoid the 25% tariff hit. For his part, Trump probably doesn’t want the US economy going into a tailspin a year before the 2020 election either. As a result, I think we’re at Peak China Trade Deal right now.

This suggests we might also be at a near term low point for gold, silver, and bonds too. It all depends on how positive a Brexit agreement will be for risk assets/negative for safe havens.

Rate cut chances have fallen; while we will probably get one more cut in October, the odds of a second cut in December have dropped substantially.  If nothing changes between then and now, of course.

Big bar premiums on gold and silver have changed little, and ETF discounts have increased. There is no shortage of gold or silver at these prices.

The COT reports show little change in position from last week. Gold still looks like a COT top, as does silver.

Over the next month, will have to see how the US economy responds to the “no tariffs coming” news. The response might be a bit surprising. How much “tariff front-running” (buying stuff ahead of the tariffs by companies and consumers) that drew demand forward occurred? If it was a lot, the post-announcement hangover could end up causing a slump. If true, this would suggest some unexpectedly worse economic news ahead.

Which would be gold positive, of course.

Anyhow, I believe Peak US-China trade agreement news has arrived. I think – sell the news (in risk assets) is probably what will happen next. My opinion – not financial advice. Etc.