The weekly metals sector map has a US-China trade deal top of mind – palladium and copper did best. At the same time, PM was hosed: juniors are leading seniors down, and silver is leading gold down, and the miners are leading the metals down. Everything PM has dropped below that 9 MA. That’s a clear sign of an impending correction in PM.

Gold fell -6.20 [-0.48%] to 1286.41, with all of the losses happening on Friday. Friday’s move was enough to trigger sell signals on both the daily and weekly forecasters. That same pattern held true for gold/Euros also. While gold remains in an uptrend on the monthly timeframe, it is now in a downtrend on the daily and weekly. The pennant pattern is no longer in play.

COMEX GC open interest rose +32,138 contracts. Shorts are loading up. Interestingly, on Friday OI actually declined -1,577, which suggests a minor amount of cash-register ringing.  I think the shorts have it right – gold will probably continue to drop as the US-China deal moves towards a conclusion.

No COT report this week because of the government shutdown. 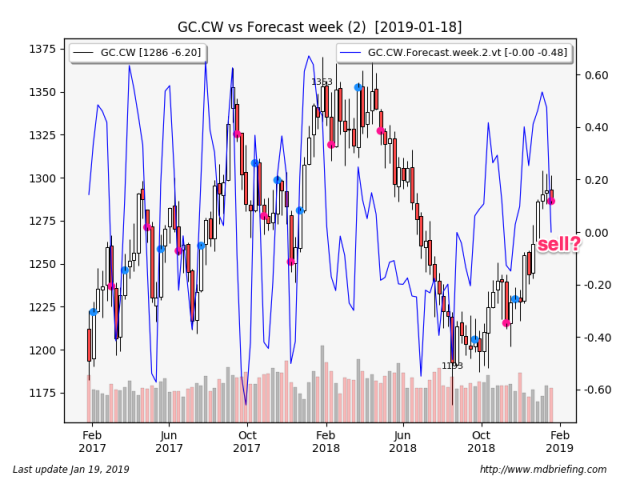 Silver fell -0.28 [-1.79%] on the week, underperforming gold again. Daily forecaster issued a sell signal earlier in the week, and after Friday’s big plunge, the weekly forecaster was solidly in “sell” territory as well. Silver is now in a downtrend in both daily and weekly timeframes. 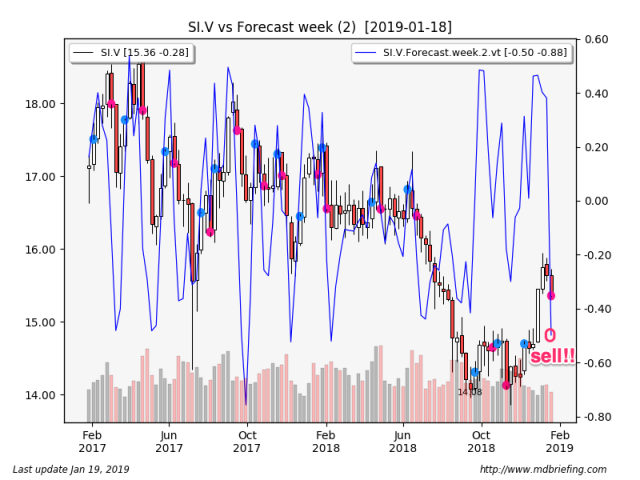 Miners were hit hard; XAU fell -4.64%; unlike the metals, XAU had 3 bad days, dropping below the 9 MA on Monday, which was our first clue that things were amiss; Tuesday was actually the worst decline, with Friday being somewhat anticlimactic. Still, XAU forecaster is now in a downtrend in all 3 timeframes, and Friday’s long black candle was not a reversal bar. 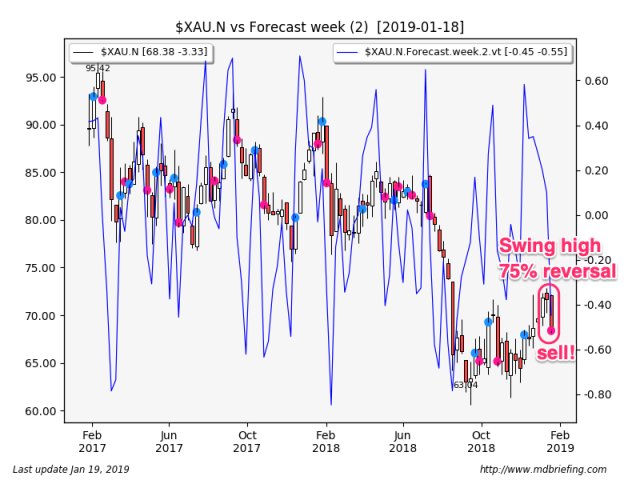 The buck rose +0.68 [+0.72%] to 95.78. The biggest move came on Tuesday, which also resulted in a buy signal on the daily. The weekly move also resulted in a buy signal in that timeframe too, which brings DX into an uptrend in both timeframes – although the uptrends are not particularly strong. The monthly is still pointing downhill. We’ve gone way beyond dead cat bounce for the buck. 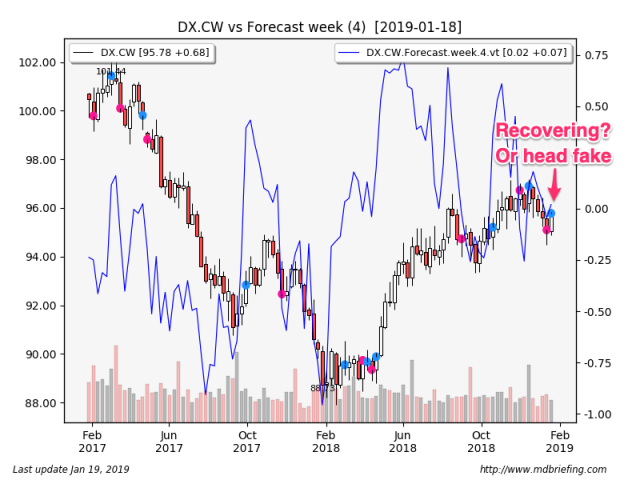 SPX climbed +74.45 [+2.87%] to 2670.71. On Thursday, SPX managed to close above the 50 MA, and Friday saw a new high. There are no bearish indicators that I can see; daily and weekly forecasters both look strong. It was a good week for equities – positive noises about US-China deal, the rally in crude, help from both copper and palladium, and selling pressure in US treasury bonds and gold.

The sector map shows financials and industrials leading, with utilities and homebuilders bringing up the rear. The rally in financials had to do with some good earnings reports from our friendly banksters; the safe havens were all losers this week.

Globally, the US was at the top of the heap again this week.

TLT fell -1.13%, moving lower for 3 of 5 days this week, making a new low on Friday. TLT remains in a downtrend, but not a particularly strong one. The TY drop was -0.67%, a fairly large drop for the 10-year. TY is in a downtrend in both the daily and weekly timeframes, and the bearish harami on the monthly is starting to look like a reversal (54%). The 10-year yield rose +8.3 bp to 2.78%. I’d expect more losses if that US-China trade deal gets done.  You can see in the DGS10 (10-year yield) chart below – a swing low, and a strong uptrend.  If “risk on” continues I’d expect the 10-year yield to continue moving higher. 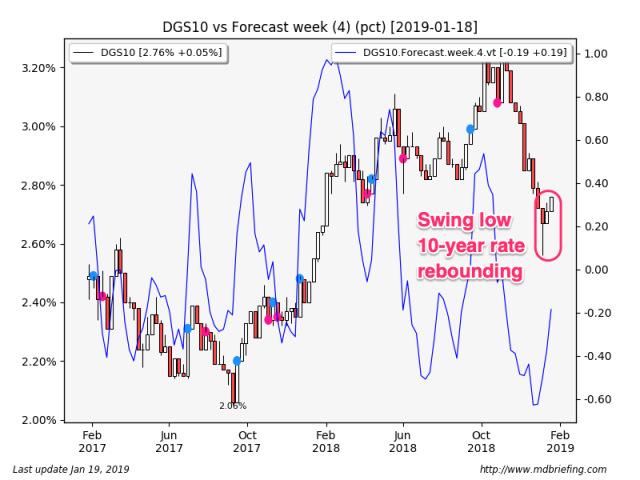 JNK rose +0.69%, managing to make a new high on Friday, but not a very emphatic one. JNK’s days of large moves may be behind it. If crude and SPX both rally strongly, and this is all JNK can do – we are probably approaching the upper limit of the JNK rally. Its still a sign of risk on, but not a very strong one, and a bit of a cautionary note to the risk on parade.

Crude rallied again this week, up +2.00 [+3.84%] to 54.14. There was a daily buy signal on Monday, then crude crossed the 50 MA on Wednesday, and broke out to a new high on Friday. The EIA report on Wednesday was bearish (crude: -2.7m, gasoline: +7.5m, distillates: +3.0m); as with last week, EIA showed more large builds in product inventories. And also like last week, the bearish news only resulted in a momentary sell-off, which is a very bullish indicator. Market rallies on bad news – exactly what the bulls want to see. Crude is now back in an uptrend in all 3 timeframes. The 3-week move in crude is definitely helping equities to rally. 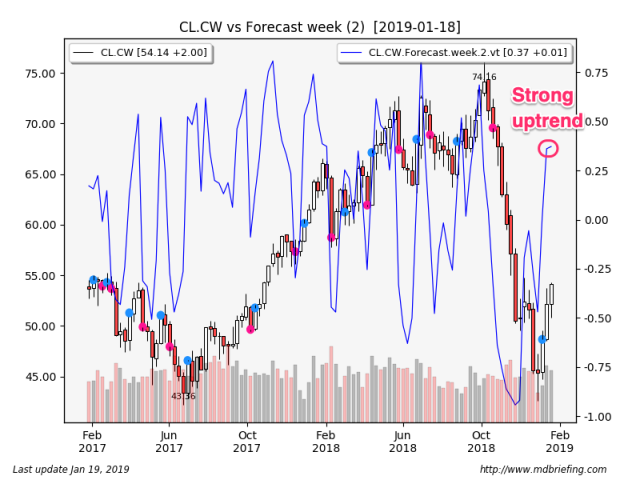 * Bullion Vault gold (https://www.bul lionvault.com/gold_market.do#!/orderboard) shows no premium for gold [New York] and a 5c discount for silver [London]. Calculation uses Kitco’s closing spot prices in New York, minus the mid-point of bullion vault’s current bid/ask on the metal in the stated city.

This week was a lot like last week – crude and equities moved higher this week in a move of mutual support. There were more happy noises from the US-China trade negotiations, which also boosted prices of risk assets and industrial metals, and caused some more selling in the safe havens. PM miners suffered quite a bit of selling pressure. The futures market is slowly starting to price in a rate increase once more, albeit 11 months out.

Big bar gold premiums on gold and silver remain low, and discounts at the ETFs have started to move higher; there appears to be no shortage of physical metal at the moment.

No COT report due to the government shutdown.

Turns out that margin debt has really plunged over the past 3 months – probably a product of equity market decline as well as a contributing factor. Red line below is the total margin debt (in $billions). Notice how it parallels the move down in equities. Its a real pity this information isn’t available in real time. Well, it IS available in real time to the insider-banksters, just not to the great unwashed like us. We get it with a one-month delay.  That tells you just how useful the data actually is. 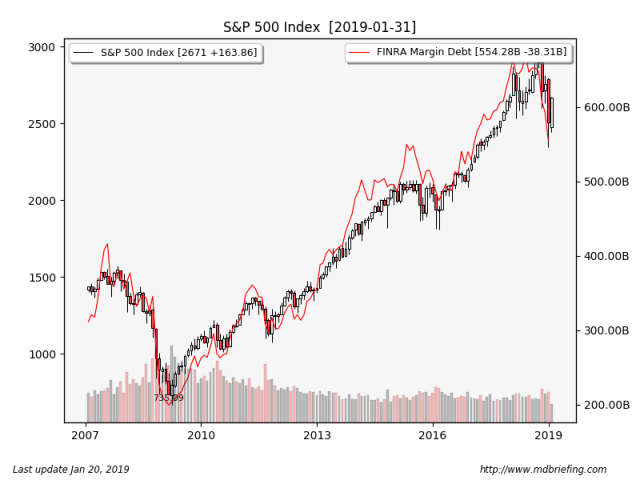 On the “recession prediction” subject, Industrial production (released Friday) looked quite strong: forecaster for the quarterly INDPRO series has backed away from its sell signal and is now pointing higher. INDPRO is an important indicator. PPIACO is also doing better; it may be walking back last quarter’s sell signal too. That’s probably due to the rally in oil prices. Both of these indicators are suggesting “no recession ahead.” At least not in the US anyways, and at least not this quarter. There is plenty of bad news coming from China. 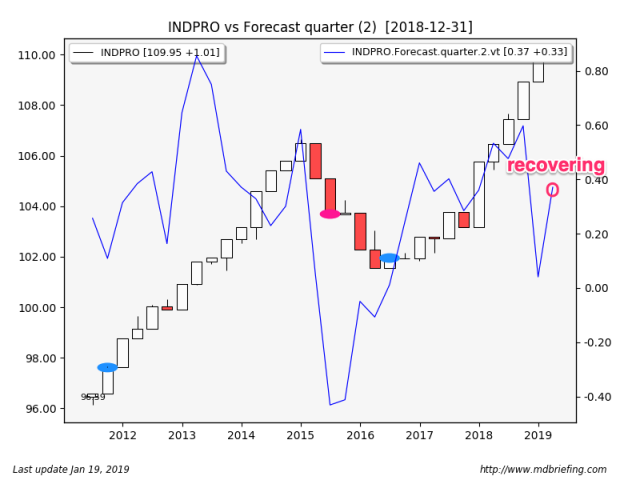