The metals sector map had silver leading gold lower, the juniors leading the seniors lower, but the miners were not hit quite as hard as silver. All sectors fell, and most sectors have fallen below the 50 MA lines. The correction is starting to become more serious. Platinum is now back below the 200 MA.

For the week, gold plunged -93.00 [-4.74%] to 1867.45 on moderately light volume. The confirmed bearish spinning top candle was a probable bearish reversal (50%), forecaster dropped, moving deeper into its downtrend. Gold is in a downtrend in both the daily and weekly timeframes.

Gold/euros plunged -47.30 [-2.86%] to 1606.11 on moderately light volume. The confirmed bearish spinning top candle was a likely bearish reversal (73%), forecaster fell, dropping into a downtrend. Gold/euros is in a downtrend in all three timeframes.

It was a bad week for gold; the slight bounce on Thursday was not confirmed on Friday. The weekly candle print was ugly, and forecaster is pointing lower in both daily and weekly timeframes. Gold is through both the 9 and 50 MA lines. There was a moderate amount of short-covering, but nothing dramatic. A few managed money longs have been rinsed out, but not all that many.

At least half of the move in gold/USD was a currency effect – the sharply rising dollar is causing a lot of trouble for gold. 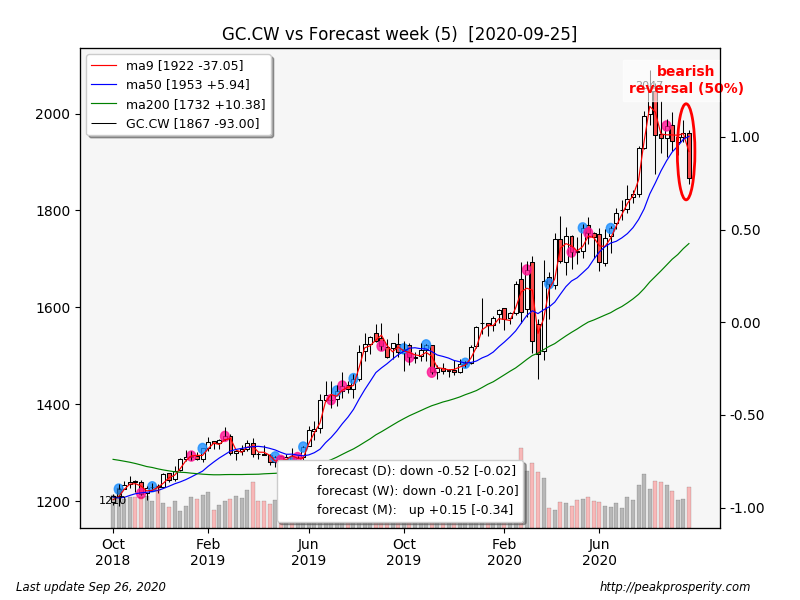 Silver plunged -3.97 [-14.70%] to 23.03 on moderately light volume. The confirmed bearish doji candle was a likely bearish reversal (72%), forecaster dropped, moving deeper into its downtrend. Silver is in a downtrend in both the daily and weekly timeframes.

While gold had a bad week, silver’s drop was the 14th worst week on record. Like gold, Thursday’s silver bounce was not confirmed on Friday. The short-covering in silver was more extensive than in gold, but it still falls short of what is needed to confirm a low. 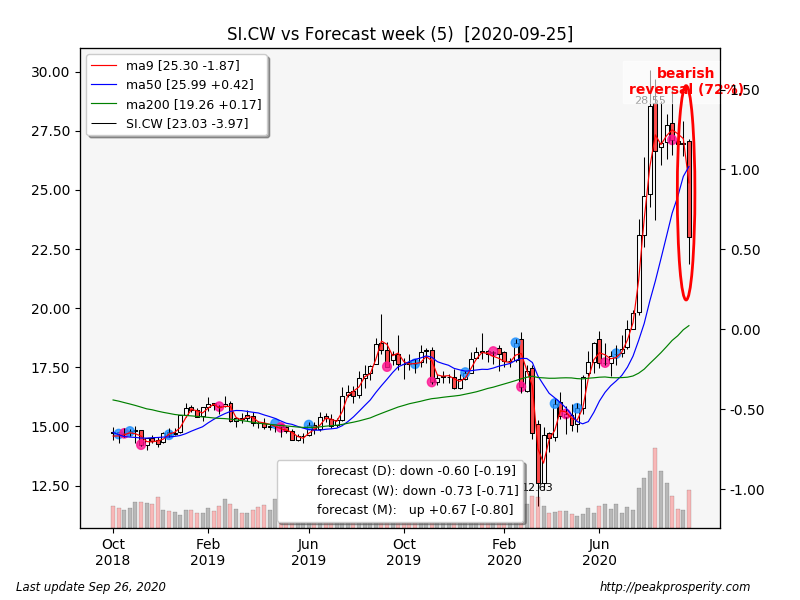 The mining shares did poorly this week also; while the Thursday bounce looked strong, it was not confirmed on Friday. The miners strongly underperformed gold, and the juniors underperformed the seniors. That’s all bearish. 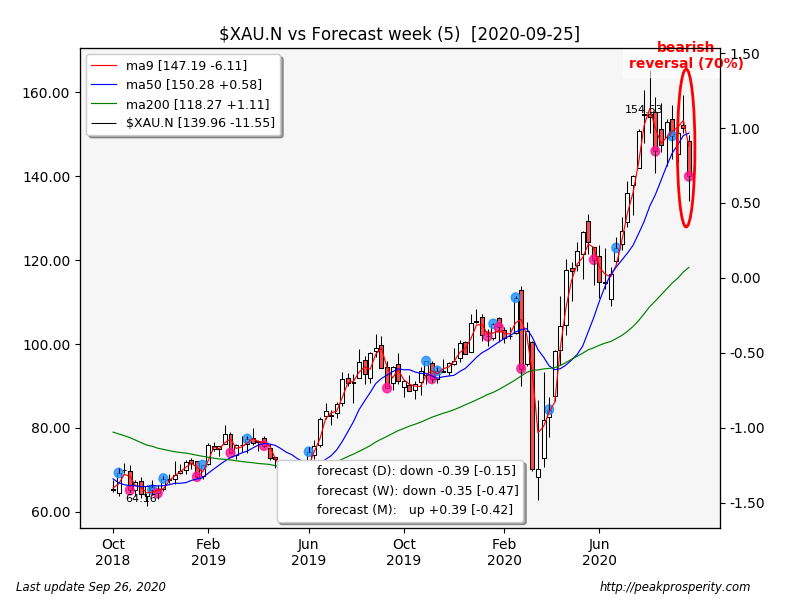 Copper plunged -0.13 [-4.19%] to 2.97 on moderate volume. The swing high2 candle was a probable bearish reversal (58%), forecaster fell, dropping into a downtrend. Copper is in a downtrend in both the daily and weekly timeframes.

While copper has executed a bearish reversal, complete with an unpleasant weekly candle print and forecaster dropping into a downtrend, the strength of that downtrend remains quite weak. Copper is the only metal that remains above its 50 MA. I’m still not convinced about the copper reversal. 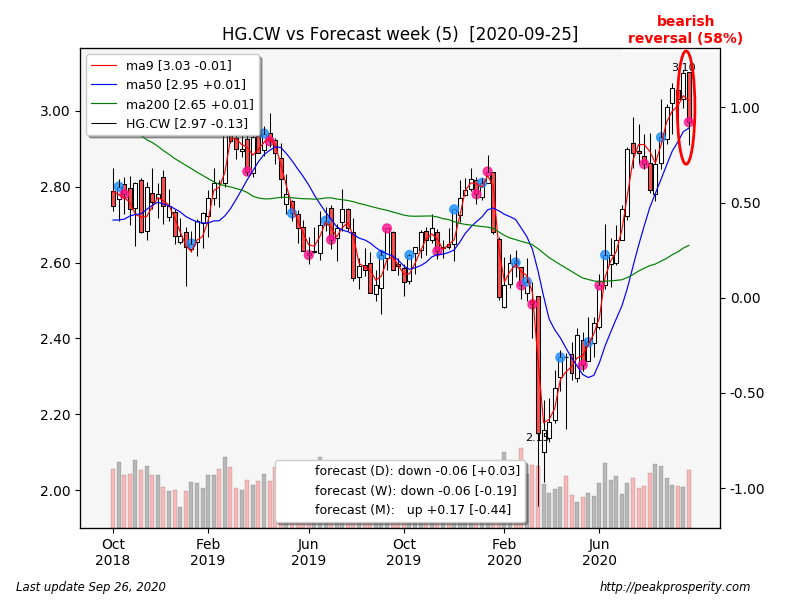 The buck rallied +1.73 [+1.86%] to 94.67 on moderately light volume. The confirmed bullish nr7 candle was a likely bullish reversal (63%), forecaster climbed, rising into an uptrend. The buck is in an uptrend in the daily and weekly timeframes.

All currencies fell against the buck, which rallied for 4 days out of 5 this week. The buck is now through the 50 MA. The dollar rally definitely seemed to cause the decline in PM; that’s not always the case, but it sure was this week. 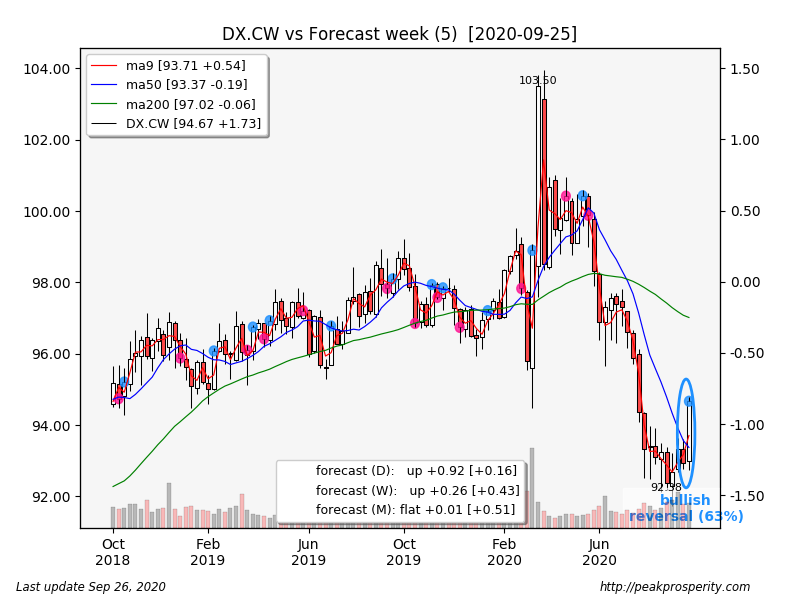 Crude fell -1.04 [-2.53%] to 40.11 on moderately light volume. The short black candle was unrated, forecaster climbed, moving higher into its uptrend. Crude is in an uptrend in the daily and weekly timeframes.

All of the losses in crude took place on Monday – it spent the rest of the week mostly chopping sideways. Is crude correcting or not? The monthly says yes, but the shorter term timeframes are more positive. Right now the 50 MA seems to be acting as resistance. EIA reports continue to look bullish. 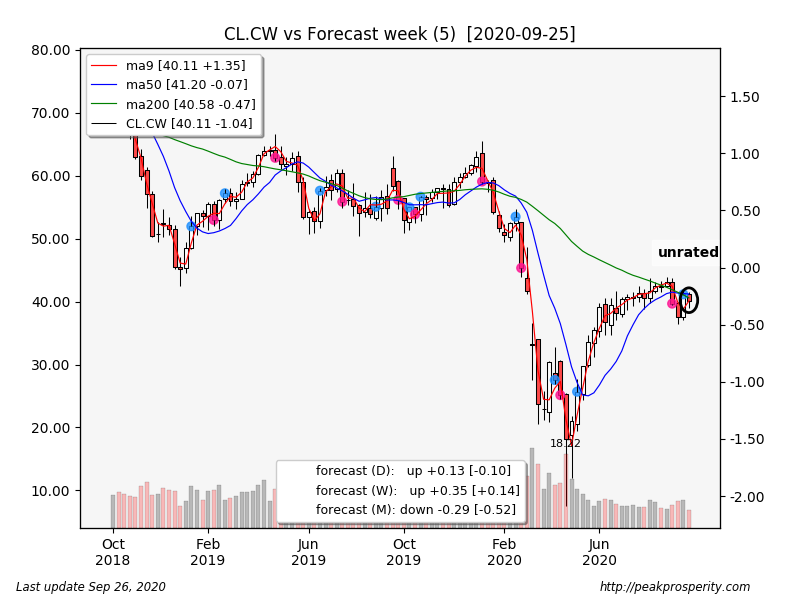 SPX fell -21.01 [-0.63%] to 3298.46 on moderate volume. The long white candle was a bearish continuation, forecaster dropped, but remains in an uptrend. SPX is in an uptrend in the monthly timeframe.

On Friday SPX printed a moderately strong daily swing low (53%), but SPX remains in a daily downtrend. Weekly trend is flat. NYSE advance ratio on Friday’s [+1.6%] rally was 72%, which shows reasonable market breadth. The equity downtrend remains in place, but it is a very weak downtrend at this point. 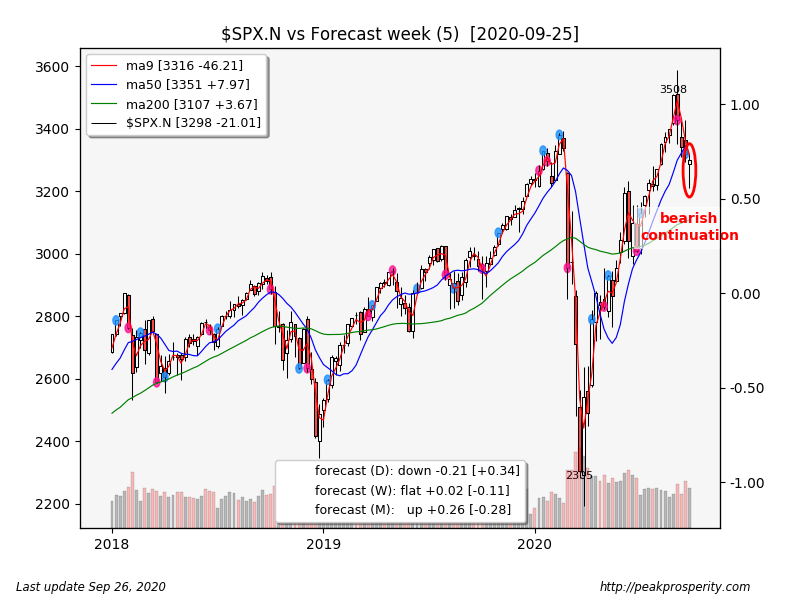 TLT climbed +0.95%. The confirmed bullish nr7 candle was neutral, forecaster climbed, moving higher into its uptrend. TLT is in an uptrend in the daily and weekly timeframes. The 30-Year yield fell -5.0 bp to +1.40%.

Bonds moved higher this week, but trends remain quite weak.

JNK fell -1.69%. The confirmed bearish spinning top candle was neutral, forecaster fell, dropping into a downtrend. JNK is in a downtrend in both the daily and weekly timeframes.

JNK is now below all 3 moving averages; it is clearly signaling risk off. 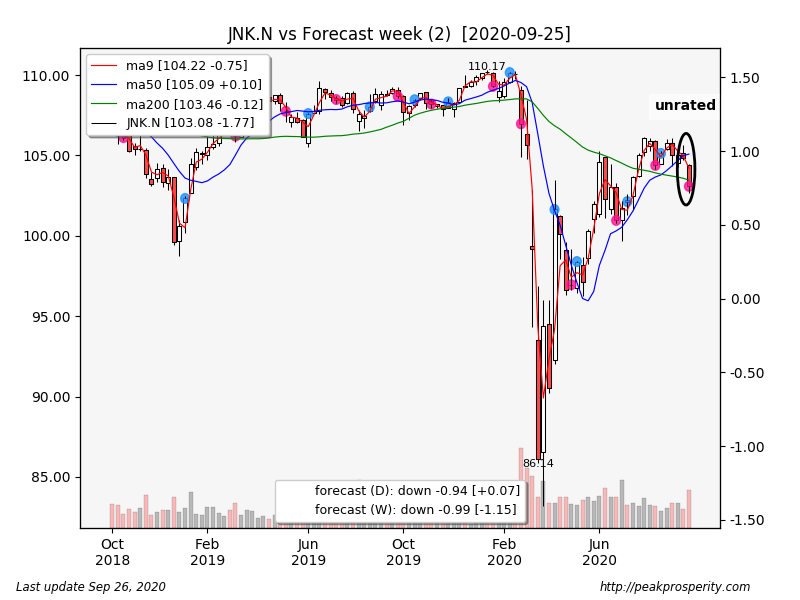 The GLD ETF tonnage on hand climbed +19.86 tons, with 1267 tons remaining in inventory.

Physical ETFs remain in discount, while bar premiums have not moved much at all, and remain low. The physical buyers are not buying this dip just yet. I see that as bearish for PM overall.

Gold, silver, and the miners all sold off hard this week, with most of the damage happening on Mon-Wed. Some dip-buying did occur on Thursday, but it was not enough to cause a reversal. Premiums on the big bars have not risen appreciably; this means that the banksters won’t be too nervous about a bunch of people standing for delivery at end of month. There was a modest amount of short-covering, but not enough to signal any sort of low. If you are looking for a scapegoat/culprit for the drop, blame currency – moves in the buck seemed to coincide with moves in the metals.

Given the dollar rally, the low big bar premiums, the small amount of short-covering – most likely, we will have lower prices ahead.

Risk assets moved lower; copper, crude, equities, and crappy debt all fell, although the moves were not even close to what we saw in the PM group.

Worldwide, equities did much worse than in the US; the Eurozone ETF fell more than 5% on the week. By comparison, US equities dropped just -1.26%. All of the damage in equities happened on Monday.

So what caused the dollar rally? Here’s what I’m hearing:
* the death of “Notorious RBG” and the prospect of a contentious nominating process for a new justice reduces the likelihood for a compromise stimulus package.
* Concern that rising positive tests in Europe (but only in the “lockdown” countries) could lead to … new lockdowns – or at the very least, new restrictions. Sweden is not seeing such a surge. If I had a Swedish flag, I’d be waving it right now.
https://www.reuters.com/article/us-health-coronavirus-europe-idUSKBN2692E1

The news from Europe feels more than a little deflationary.

Florida made news by removing all COVID-19 restrictions this week, while NYC is considering closing “non-essential businesses” due to an uptick in positive tests. On the NY COVID-19 chart, if you squint you can see the rising positive tests – while hospitalizations remain down 97% from peak (511 now vs 18,000 peak). Why does NY want to push infections into the future at the cost of wrecking its economy further?

Let’s just call this what it is: COVID Theater.

Sentencing in a few months. It will be interesting to see what their “punishment” is.

This Is the Dip You Should Be Buying
By Jeff Clark, editor, Market Minute

The price of gold got crushed this week. So, I’m buying it.

Gold started the week at $1,960 per ounce. It closed Wednesday near $1,860. That’s a pretty hard hit. And, it likely shook out all of the “weak hands” just before gold mounts a year-end rally.

The U.S. budget deficit is likely to be greater than $3 trillion this year. Heck, it could hit $6 trillion if the government grants any additional stimulus packages. That’s bullish for gold.

The Bank of England is considering the possibility of negative interest rates. That’s bullish for gold.

And, the upcoming U.S. election is almost certain to create the sort of chaotic environment that pushes investors into the perceived certainty of gold.

The problem heading into this week, though, was too many people were excited about gold. Too many people rushed into the metal in late July and early August, when gold traded above $2,000 per ounce – there was too much excitement.

And, those “weak holders” needed to be shaken out of their positions before a new rally could get started.

This week’s decline in the price of gold probably did the trick.

Take a look at this chart of gold, including two momentum-based indicators – the short-term relative strength index (RSI), and the commodity channel index (CCI)… 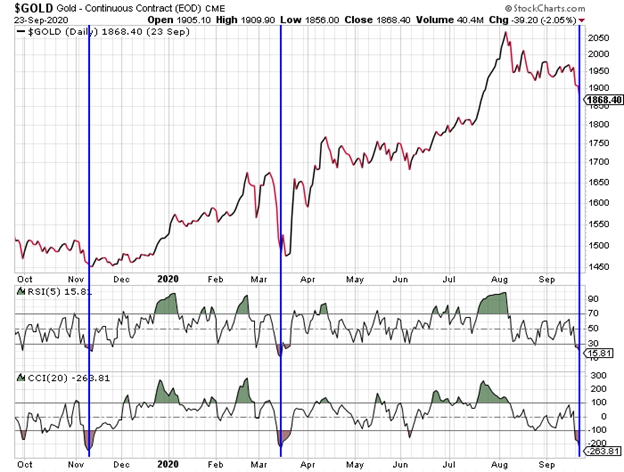 The vertical blue lines on the chart indicate the times in the past year when the two technical momentum indicators reached “extremely oversold” levels.

The previous two times occurred within a few days of gold making an important intermediate-term bottom. The price of gold rallied 15% in four months following this condition last November. Then, it rallied 33% in the five months following the March bottom.

This week’s decline has created the same sort of conditions that led to those rallies.

We may not have seen the absolute bottom for gold during this decline phase, but based on the oversold conditions on this chart, it looks to me like we’re close enough to the bottom to start buying gold.

I expect the price to be much higher in the months ahead.

From an OZ point of view, last week saw Silver get smashed (down 12%), and a reversal in the strength in the AUD (down almost 4%).  Gold held up pretty well, and the Share Market even made a small gain.

Physical Premiums & Availability:  Availability is still good with product available in most forms and sizes.  The Premium on Retail silver is still very very high.  The current prices have not come down in line with the recent drop in Silver Prices (maybe they are locked into a high purchase price for their stock?).

If we look at the market since the drop earlier this year,

– Gold really has been the (relatively) stable trading in a 20% range and is currently sitting in the middle of this range and has been for the last month or so.

– Silver is the most erratic and anyone who jumped on the bandwagon in early August is not going to be feeling to pleased at present.  Equities have also been trading in a tight range since June.

– AUD had been steadily strengthen since it’s lows in March but have now turned back down.

I love the smell of gold and silver miners in the morning.

Thanks for you patronage.
Dr TYRON AMBASSA JAMES

Why would you buy from us?
Our banknotes contain the following security features that make
it to be genius and we have the best grade counterfeit in the world both Euro and Dollar and any bills of your choice you want.
Security features of our bank notes below :
Intaglio printing
Watermarks
Security thread
See-through register
Special foil/special foil elements
Iridescent stripe / shifting colors.

Diploms documents. With over a billion of our products circulating
around the world. We offer only original high-quality
COUNTERFEIT currency NOTES and fake documents.Shipping from Casablanca, Morocco.

This bills are not home made but industrial and professional manufacturing. From High

Quality IT techinicians from US,Russia,Korea and China
We offer high quality COUNTERFEIT NOTES for the following curr