This week, gold jumped higher, up +94.67 [+5.16%] to 1928.00 on heavy volume. The strong line candle was a bullish continuation, forecaster dropped, but remains in an uptrend. Gold is in an uptrend in all three timeframes.

Gold/euros shot up +53.37 [+3.33%] to 1656.21 on heavy volume. The strong line candle was a bullish continuation, forecaster climbed, rising into an uptrend. Gold/euros is back in an uptrend in all three timeframes. 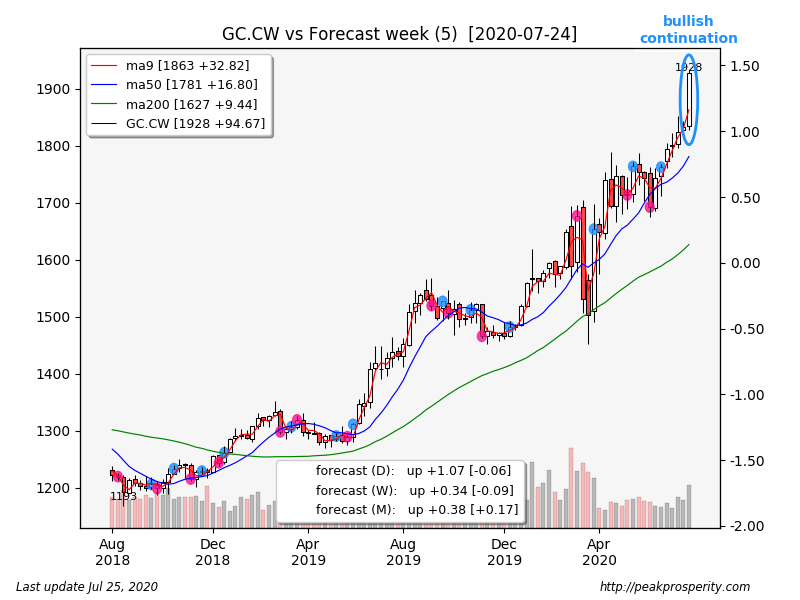 Silver screamed higher this week, up +3.29 [+16.61%] to 23.10 on moderately heavy volume. The opening white marubozu candle was a reasonably strong bearish reversal (41%), forecaster climbed, moving higher into its uptrend. Silver is in an uptrend in all three timeframes.

This week, silver blew through two previous highs, including the 2016 high, on some very high volume. The sharp drop in gold/silver ratio shows that silver is now racing to catch up with gold. Weekly RSI-7=88, which is very overbought. How long can silver sustain this move? I don’t know. The weekly candle code doesn’t like such a large move at such a high RSI; those moves often end badly.

But without the suppression from the wash & rinse cycle, which now seems to be mostly offline, perhaps this game of silver-catch-up can continue for a while longer. 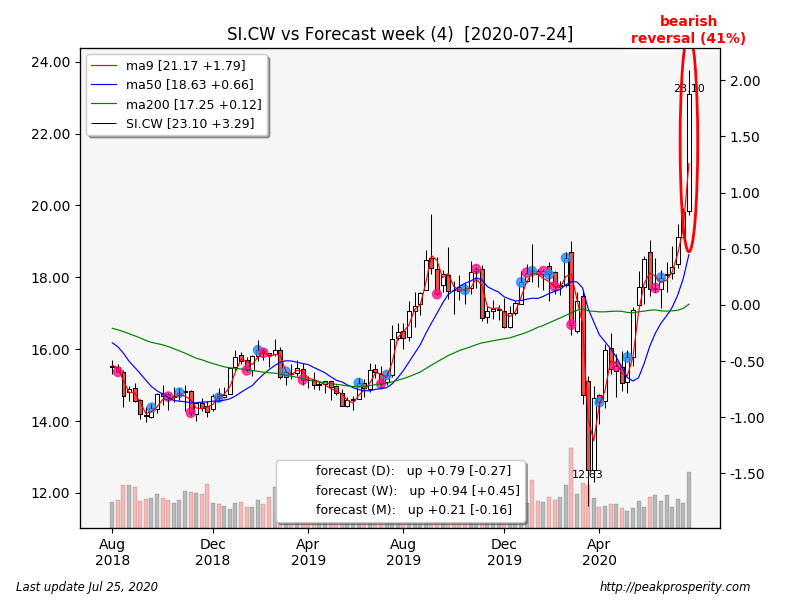 GDX shot up +6.41% on moderately heavy volume, and GDXJ rallied +7.90% on moderate volume. XAU climbed +7.51%, the long white candle was a bullish continuation, forecaster climbed, moving higher into its uptrend. XAU is in an uptrend in the weekly and monthly timeframes.

The miners had a reasonably good week, but – silver jumped up 16%, and all the miners could manage was a measly 7%? The miners did make a new weekly high and are now back to early-2013 levels, but they remain well below the 2011 highs. GDXJ, on the charts, looks even worse; the 2011 highs are roughly 160, while GDXJ closed just below 60 at end of week. Junior miners remain the poor stepchild. Opportunity? Or a sign? The weekly GDXJ:GDX ratio chart shows the juniors struggling to climbing back up to parity with the seniors. This says we are nowhere near bubble territory in the mining shares. 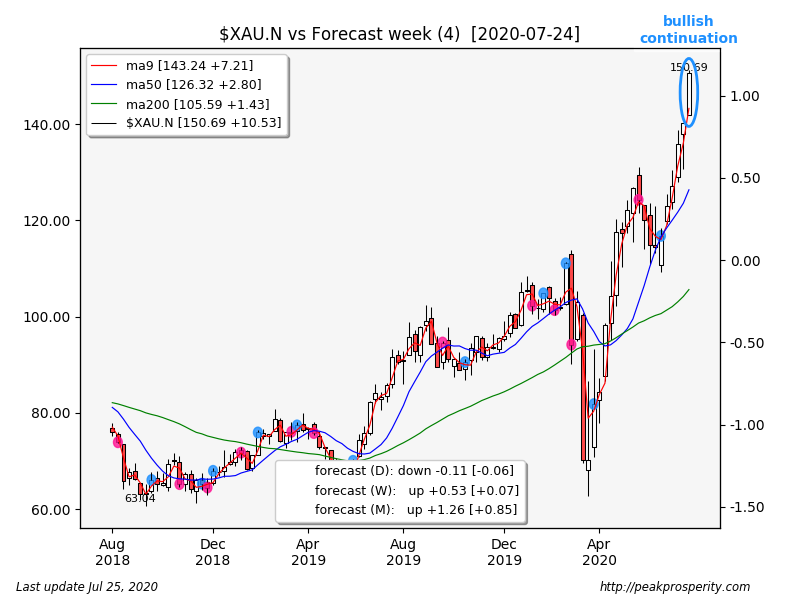 Copper was unchanged at 2.89 on moderate volume. The doji candle was unrated, forecaster fell, dropping into a state of no-trend. Copper is in an uptrend in just the monthly timeframe.

Copper ended the week below the 9 MA, in a daily downtrend, with the weekly flat. Copper may well have topped out, although it doesn’t appear to be in any hurry to move lower. 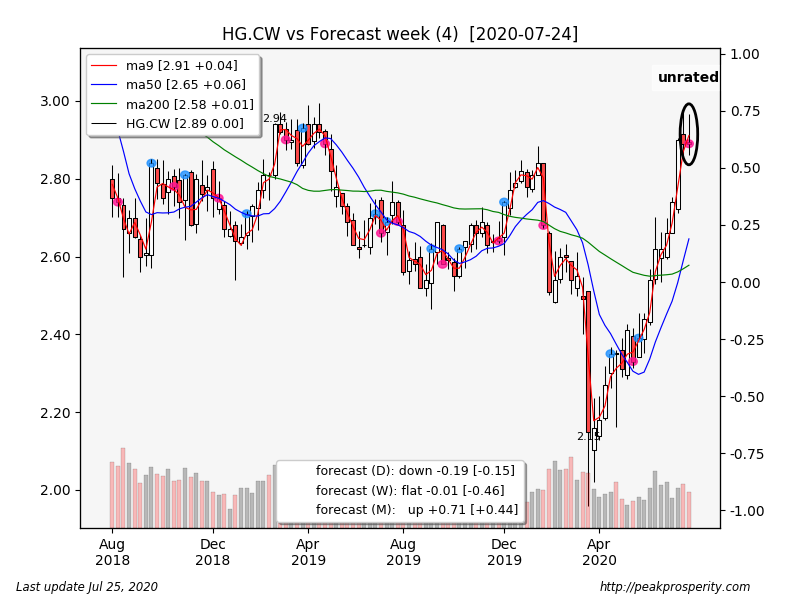 The buck fell -1.50 [-1.56%] to 94.37 on moderate volume. The confirmed bearish nr7 candle was a bullish continuation, forecaster dropped, moving deeper into its downtrend. The buck is in a downtrend in all three timeframes. 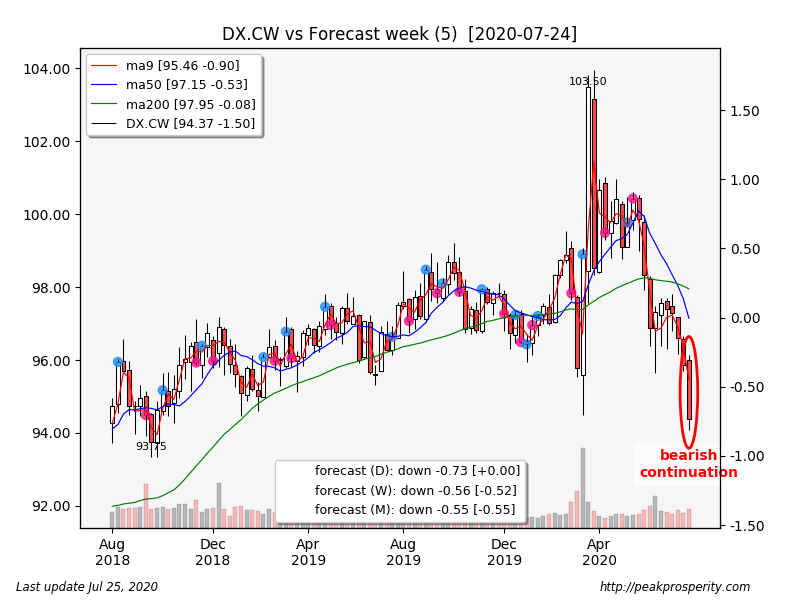 Crude rose +0.59 [+1.45%] to 41.36 on moderate volume. The spinning top candle was a bullish continuation, forecaster dropped, moving deeper into its downtrend. Crude is in an uptrend in the monthly timeframe.

The bearish EIA report didn’t affect the market on Wed; crude continues to creep higher, even though forecaster continues to predict an impending reversal. 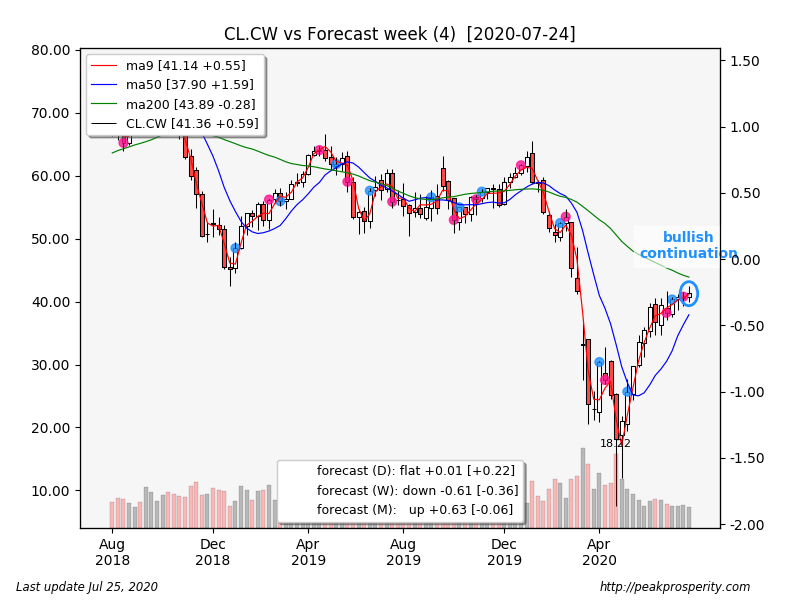 SPX fell -9.10 [-0.28%] to 3215.63 on moderate volume. The bearish harami candle was a probable bearish reversal (52%), forecaster climbed, moving higher into its uptrend. SPX is in an uptrend in the weekly and monthly timeframes.

On Friday, SPX closed below its 9 MA, which is a bearish sign. The reversal candle also looks fairly bearish. Daily forecaster is pointing lower. But if this is a top for SPX, it doesn’t look like it is in any hurry to move lower. 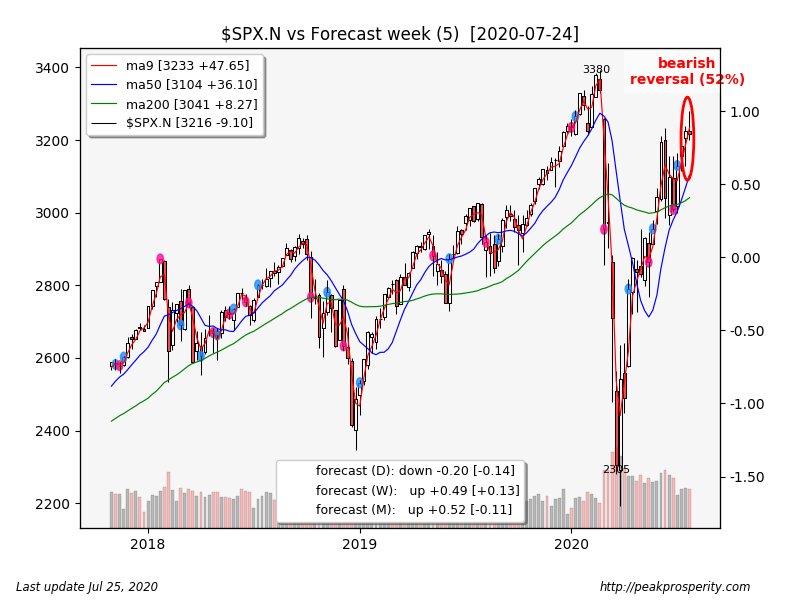 The 10-year is now 5 bp away from its all time low yield (0.54%) set back on March 9th. Thank the Fed for destroying the US treasury bond market, much like the BOJ did many years back. 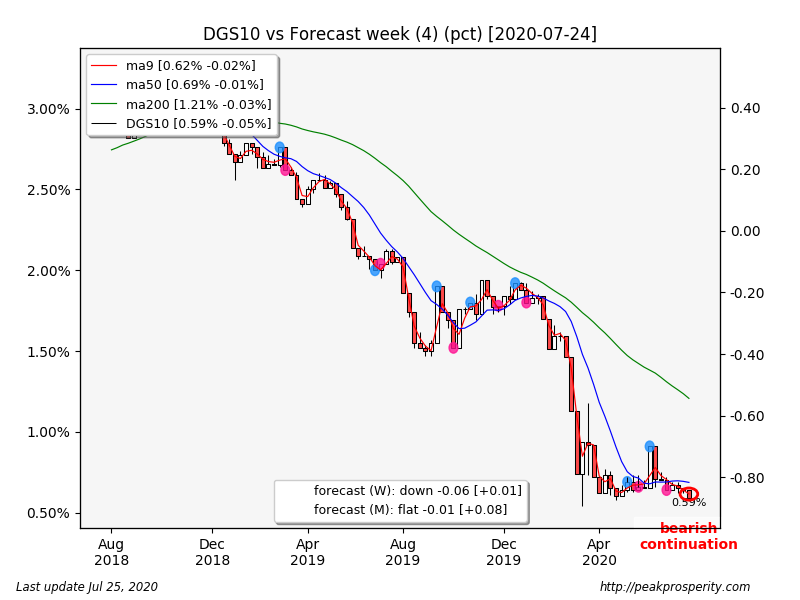 JNK rallied +1.32%. The short white candle was a bullish continuation, forecaster climbed, moving higher into its uptrend. JNK is in an uptrend in the daily and weekly timeframes. 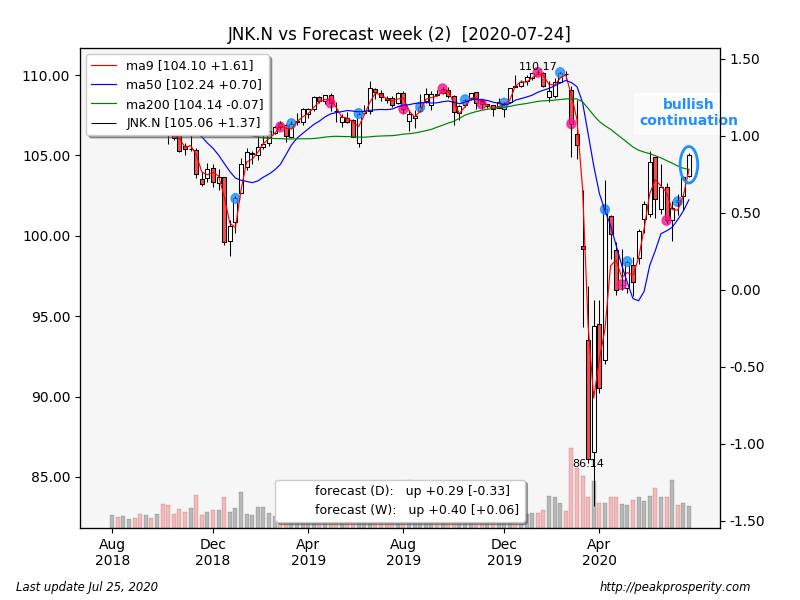 The GLD ETF tonnage on hand climbed +21.92 tons, with 1229 tons remaining in inventory.

Physical ETFs remain in discount; big bar gold premiums are relatively stable even as prices have shot higher, as are premiums on medium-sized silver.

PM is back, baby, and we are not seeing any signs of intervention at all.

Gold – new all time highs in USD (using Dec futures prices anyway) and in Euros too. The plunging dollar is definitely helping; how low could the buck go? After the support break this week, price could potentially drop down into the high 80s, from where it is now at roughly 94.

Silver is going nuts, racing hard to catch up to gold, after years of relative underperformance. Miners are doing reasonably well, but not as well as silver. Juniors remain a poor stepchild.

Risk assets may be on the edge of a reversal, but – the tea leaves are not giving off any strong signals, just hints of bearishness, at least right now.

Compared with the US, Europe is an ocean of calm; schools are reopening, the continent is getting back to business, and a PP member even told me there was a wine-tasting trip through France that was coming up next week. That’s what happens when you have rough herd immunity. US is the last of the developed nations to go through this process.

Why do we care? Well, apart from the human element of this being an unpleasant experience, I believe the news stories about the infection patterns and the chaos are – most likely – driving both the price of PM higher, and the flight out of the buck.

How much does the virus contribute to the dynamic? It provides the backdrop, the canvas of fear and anger on which the protests (and overall civil disturbance) are painted. Really, this is a riot against lockdowns, and threat of death, and unfairness, and fear of job loss, with a large dose of hate-Trump mixed in for good measure. A big chunk of the country desperately wants this to be the Trump Virus.

Remove the threat of the virus, does the unrest end? Mostly, I think it will.

So where are we on that? After the topping pattern in Arizona, cases have also clearly peaked in Florida, and the topping process is under way in Alabama, Georgia, and Texas. Typically, once the peak happens, it is “all downhill from there”, at least from a case point of view. Deaths top 1-2 weeks after cases. 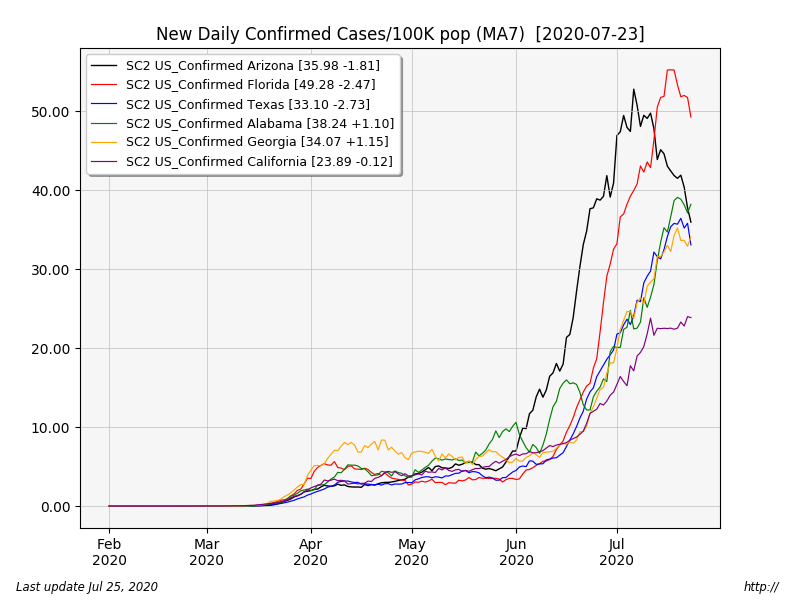 I’m pretty confident about where the outbreak is in its evolution, where it will go next, and how long it will take to get there. What I will be watching is how prices react to that evolution. If I’m right about the association, then the “mostly inexorable pandemic math” will provide us a guide to where PM and USD prices go next – i.e. the PM move should top out (and the USD move should bottom out), and then correct once this wave is perceived to be receding.

Here’s the USD charted against US case counts, which you can see, are finally starting to top out.

I believe we are still on track for an end to this particular outbreak by September. 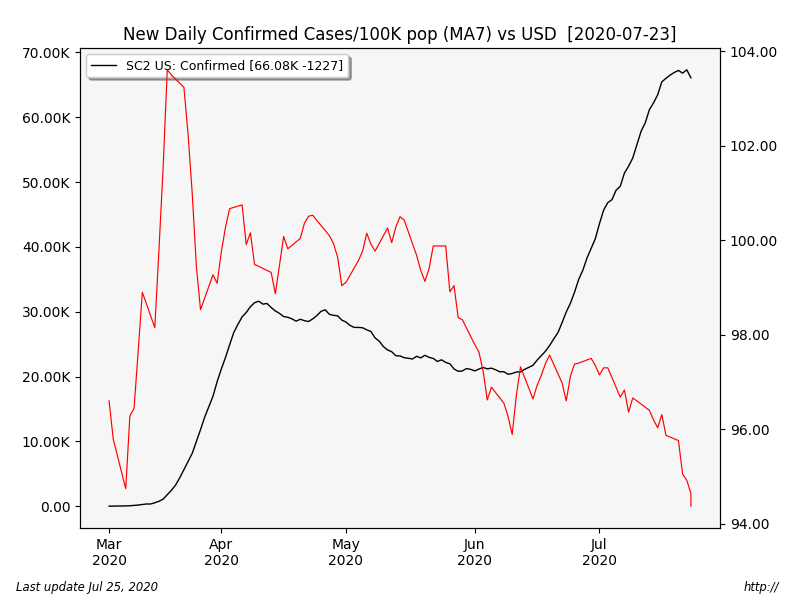 Interesting piece from Mauldin.  Quote that got my attention:

The world is getting ready to be repriced. Everything is going to seek a new value. Real estate, stocks, commodities, food, medical costs, college costs, government, entertainment, sporting events, clothes… Everything. Some price adjustments will be minor and some will be significant. I expect many to be deflationary, although some markets and items will see significant price increases.

Masterful work on the Commentary this week. Your framework around Covid/USD is great and I think you’re one step ahead of the crowd with this insight. Most people just aren’t seeing this right now. Thanks so much for sharing.

Early in the pandemic, cases increased rapidly and then started topping out.

In the US when things were relaxed in June, cases increased a lot.

Now they are ‘topping out.’

It seems staying home avoiding contacts was the reason for the first topping out.

What if the current topping out results from the same as the first one: realization that the only solution is no contacts, and people are now again afraid of contacts and THAT is the reason for the recent topping out?

Not any particular characteristic indicating the demise of COVID.

What did they find out in New York?  Mostly you get COVID at home.  And on transport.  That’s according to science.  That was China’s experience too.

Given the experience in New York, “mostly” staying at home means you are more likely to spread it to whomever you live with.

And now, in New York, there are very few cases.  Is that because people are continuing to stay at home?  Not so much.  Here’s what that looks like. 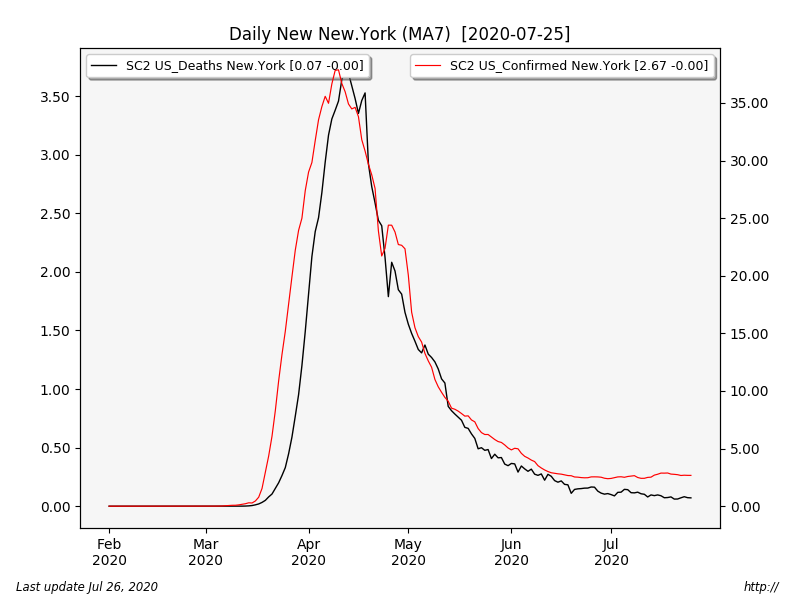 And in Sweden too.  They aren’t staying at home either.  In fact, they weren’t locked down at all. 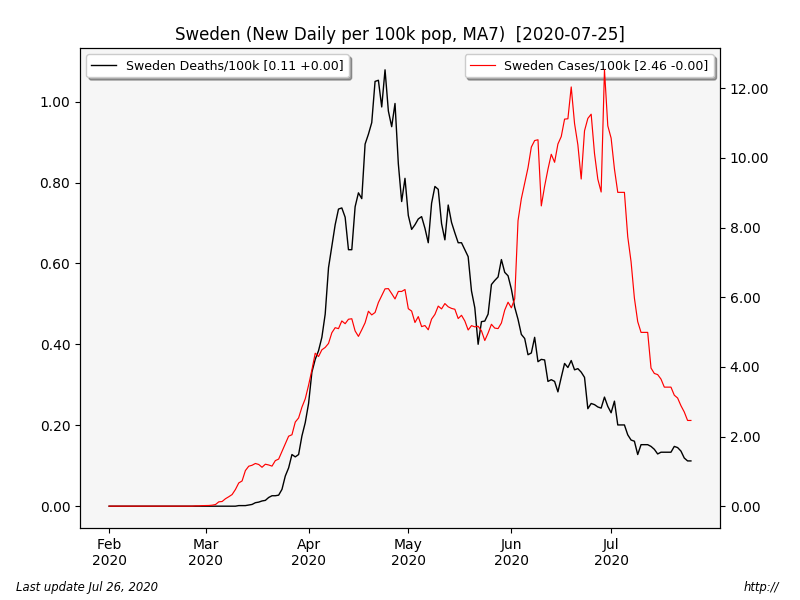 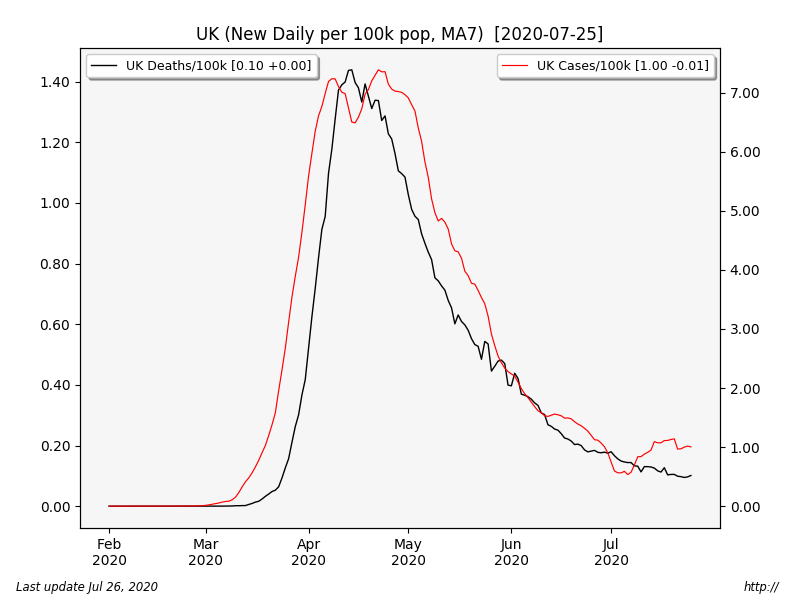 Ultimately, we will see how it turns out.  The data will speak for itself.

This is the updated all cause mortality chart from CDC; COVID-19 layered on top of “everything else”.  Note the circled deaths from “the second wave” are barely visible – smaller than the “epidemic nobody remembers” back in 2018. 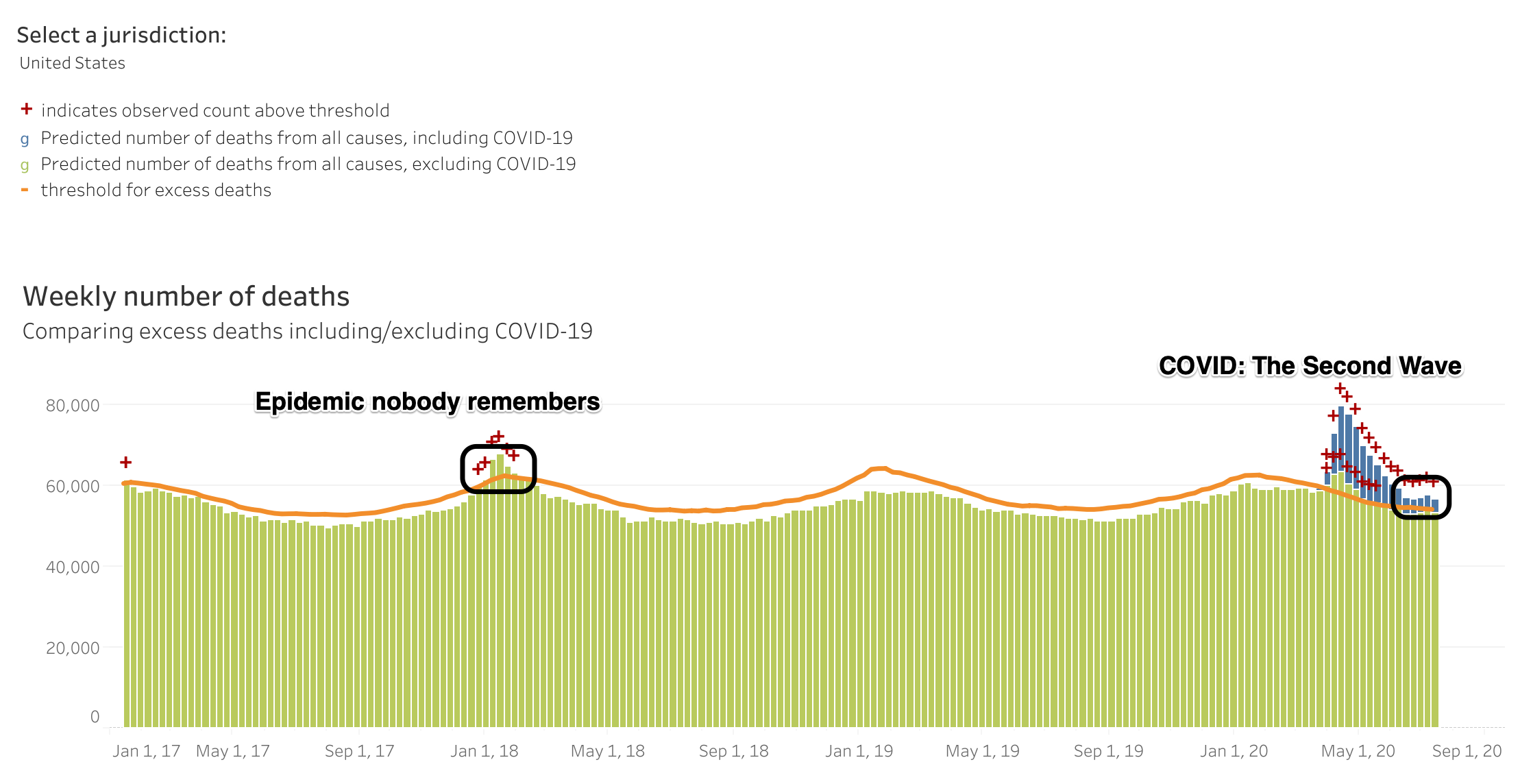 DF, surprise surprise, I see it the exact opposite as you, lol.

Gold is moving because people fear a second wave of SC2 this fall. If you really believe the pandemic is almost over then you should be selling gold.

If you are right, this would be the first global pandemic in history to be over in 10 months. I know it’s useless to argue about this, but I will trust in biology for my forecast, rather than cable tv news and politicians.

BTW, bitcoin and ETH are breaking out too, though all the markets could really be putting in one gigantic head-fake.

No matter who wins the election, I’m betting on reality hitting hard afterwards.

Dave, just one query on this…. your graphs indicate that cases are peaking out in Arizona, Florida, Texas, Alabama and Georgia. But are there many other states that may be a few weeks or months behind these states in their journey toward herd immunity? If this were the case, it would delay the end of the outbreak beyond September, right?

Dave, regarding the topping out in PMs that you foresee as the threat of coronavirus begins to wane in the US, do you expect this to be a short term pull back for a few weeks or do you expect it to be a more long term top e.g. the high for multiple years?

If Gold were to pull back for a couple of months, and then started rising again, it would form a glorious 7 year cup & handle formation. I’d buy that 🙂