Man, really doesn’t have freewill. Your consciousness is controlled by your genes.

I agree that man does not have free will, but I disagree that the control lies strictly within the genes. Experience has as much [ probably much more ] influence on your decisions as your genes.

One interesting study to reference is the “Danish twin” study, which determined that only about 20% of how long the average person lives was determined by genes.

The choices you make have more to do with your experiences…what other people taught you, things you’ve seen, cultural values, memories, and conditioning. Those things are as outside of your conscious control as the genes you were born with.

You had no control over the conditions of your birth, what your parents taught you, what the people around you taught you, how others treated you, what your environment required from you, etc..

Those things, combined with your inherent genetic foundation, determine what choices you make in life. Unfortunately, neither of them are [ were ] within your control, therefore free will is a myth.

It is my impression that most everyone will eventually buy Bitcoin.  It is one of the few openings to escape a burning building—a fire that is consuming the value stored within our fiat currencies.

The only question is at what stage of the conflagration will we act.

Conflagration is not the greatest metaphor as the paper notes that signify our money still remain and they look the same.  And the dollar amounts in our savings account is the same.  But the value is sucked out of the paper bills until they become nothing but empty dehydrated shells.

I am saying here the same thing that Chris, Adam, Alistair, Jim H, DaveF, Wolfe, Summers, VTGothic, Dalio, Rubino, iTulip, and countless other guests have said on PP over a period of many, many years.

Bleeding the value out of fiat currency is called:

Inflation is not about prices rising.  But is about the value bleeding out of the fiat currency.

Sometimes Inflation is called “The Everything Bubble” But this name directs one’s attention away from the core process which is the erosion of the value of money itself. (Rising prices are the result.)

This theft of value is hidden by several mechanisms.

Nate posted a link to a Ray Dalio interview 2 days ago.  This interview was also discussed at length about 2 weeks ago by VTGothic and Dalio’s perspective explained in simple terms that I could understand.

Since then I read The Bitcoin Standard and The Everything Bubble, both by Austrian economists.  For me the situation has clarified.

The final desperate stages of the Central Bank Endgame are summarized by Graham Summers:

All of these activities are caused by, and accelerate, the devaluation of fiat monies.

The escape doors will be closed so that everyone must accept the theft “for the good of society” and to “safeguard the children.”

I am not 100% sure that the safety exits of Bitcoin and Gold ownership can be successfully used by citizens to circumvent this process.  But these seem like good bets to me.

Buy Bitcoin in a privacy-protected manner, store it off-line in cold wallets, then memorize the secret code of the 24 seed words that allow a person to move to another distant location and re-constitute the wallet recovering their Bitcoin.  [This makes sense to people who have purchased a Ledger Nano S and used it.]

One secret code method is to create a song/rhyme using the 24 words and practice it.

Another is to buy a paperback book and mark the 24 words in the book in order.

Carry the book with you when you travel.  These 24 words can be used to reconstitute the hard wallet even if the wallet has been physically lost in one of those surprisingly common “terrible boating accidents.”

The only question is at what stage of the conflagration will we act.

There is some line at which point you’re talking reaction as compared to preparation like you write about.  I like your idea of already knowing about a concept, even practicing it.

We can act now and many of us already have, as you know.  The rest of the world may catch on sooner than we think.  For example, several companies are offering crypto credit cards and debit cards.   Each has its own withdrawal and charge limits.  You deposit BTC or LTC and the crypto is converted at point of sale into USD.

Almost anyone can open a Bitcoin or Litecoin account, hold wealth denominated in these assets and charge goods and services against it within minutes.

I don’t see this as a big problem, because the gold coin you put in someone distants’ hands doesn’t have to be the same coin you have in yours. When you want to transmit gold you just sell to a local dealer then wire the fiat currency given across the distance and the person on the other end exchanges for gold with their local dealer. Hey presto, gold is pretty damn transmissible after all. Sure it’s not super efficient, but gold is so widely distributed in the world for this to be practical enough most of the time IMHO.

And to the people worrying about a repeat of the gold confiscation event I would ask; if you were a 21st century government looking to protect your fiat by confiscating a  popular store of value, wouldn’t you go and grab all the bitcoin before you bothered tracking down and rounding up all those physical coins all over the place?

I came across a new website newsletter by Barton Wang called Liquidity Matters. He has been tracking the correlation of FED Treasury and MBS purchases, and Treasury injections (fiscal) to market movements.

He basically analyzes how the actions of the FED and Treasury affect the balance sheets of the evil big banks and their brokerages. The plumbing is kind of interesting and sometimes excess liquidity actually causes the primary brokers to make margin calls on the hedge funds.

I can’t say that I really understand it, but his 2-week market forecasts have been remarkably accurate.

He is predicting a market decline starting today and lasting for about 4 days, followed by a bounce on April 5-6, then another smash on the 7th. The week of April 12-16th should be bullish.

I decided to put a very small bet on his forecast (about $250 in the options market) and see what happens. With the SP500 hitting an all time high this morning, and it being April Fools Day, maybe there will be some selling going into the close.

I seriously doubt it.

Going to be an interesting weekend with regard to Silver dealer supply and the cryptos.

Many wealthy boomers are starting to freak out about inflation. That money won’t be flowing into Bitcoin. At this stage of the game you can’t afford to phuck up that badly. Gold is somewhat risky. Bitcoin is insanely risky.

If all you pay attention to is mainstream media type sources, you are likely going to have a very perverted impression of Trump.

Do you really believe that him using his power to lean on the Fed to be more dovish was fake news?

Here’s Thursday’s gold chart, just for old time’s sake.  Maybe – a double bottom for the yellow metal?  Right at First Notice Day?  Who woulda thought?  Silver also printed a bullish reversal too, but not quite as strong. 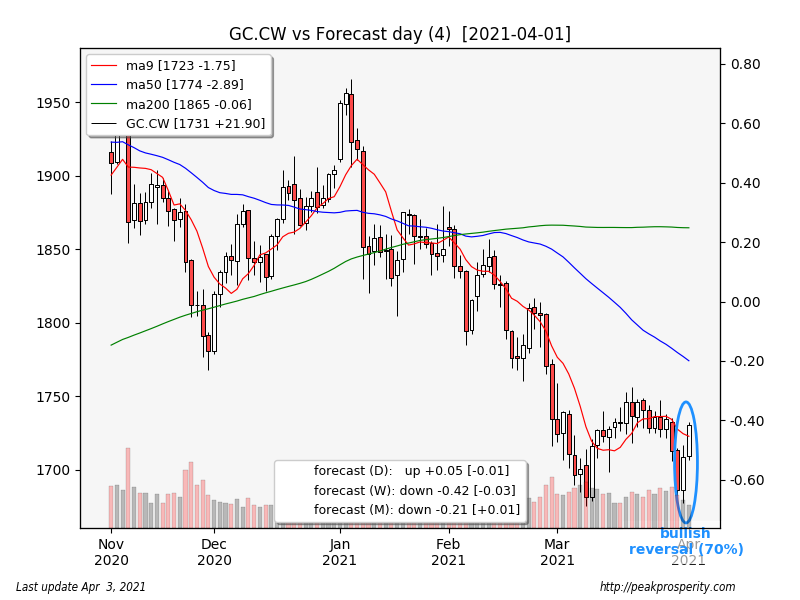 As discussed here at PP many times, this writer is a Bitcoin advocate and HODLer who has the view that the threat to the governments’ ability to fleece the citizenry is so powerful a position, that eventually, the full force of government will be brought against BTC owners.

The network itself and the assets themselves will survive, but the USE of Btc will be reigned in with criminal penalties and fines aimed at the USERS.  Usage will shrink and its utility (network size) will shrink as well.

Well articulated explanation of this side of the story.

For now, he recommends continuing to HODL Btc and anticipates Btc > $100,000.  But at some point, be ready to sell.