The metals sector map once again has palladium in the lead – another new all time high for palladium – but this week the miners led gold & silver higher, silver led gold higher, and junior miners led the seniors. This was the perfect picture of a bullish sector map for PM. Copper brought up the rear – the only item to be trading below both 50 & 200 MA lines.

One interesting point. This was not a safe haven map per se; not with the miners and silver leading. Perhaps – the market is looking through the current crisis (normally a safe haven move) to “real money printing” ahead, perhaps? Hard to say.

Gold shot up +59.97 [+3.78%] to 1648.42 on heavy volume. The strong line candle was a bullish continuation, and forecaster climbed, moving higher into its uptrend. Gold is in a very strong uptrend in all three timeframes. Gold broke out to a new 6-year high this week.

Gold/euros shot up +53.05 [+3.62%] to 1518.54 on heavy volume. The opening white marubozu candle was a bullish continuation, and forecaster climbed, moving higher into its uptrend. Gold/euros is in an uptrend in all three timeframes. Gold/Euros made a new all time high this week. Its hard to cap gold’s advance when it keeps making new all time highs in major currencies.

Futures markets are projecting a 11.1% percent chance of a rate cut at the next FOMC meeting. 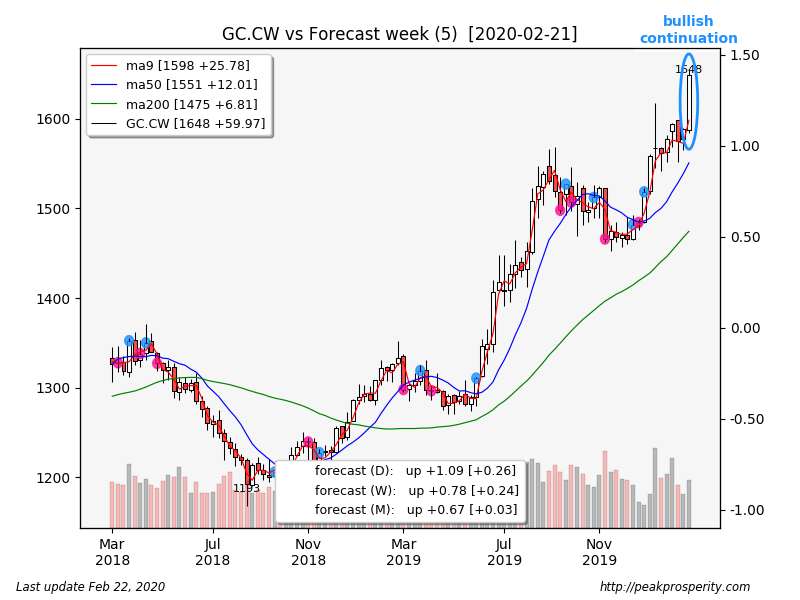 Silver jumped +0.75 [+4.22%] to 18.53 on extremely heavy volume. The opening white marubozu candle was a likely bullish reversal (71%), and forecaster climbed, rising into an uptrend. Silver is back in an uptrend in all three timeframes. Friday’s spinning top was also a bullish continuation – no daily reversal for silver on Friday. Silver continues to lag well behind gold – there was no six year high – we were lucky to get a 2-month high on Friday. The 3-year high set back in 2016 is roughly around 21; we are quite a ways away from that.

Right now, the shorts do not seem afraid to load up as price rises. However, if the worm does turn, and that huge overhang of shorts starts to bail out, the rally in silver could becomme ridiculously strong. As in, moves of $1 per day, or more. So far we aren’t there yet. What would it take? I’m guessing here: “real money printing”, Fed money printing handed out to individual US citizens to directly stimulate the economy. 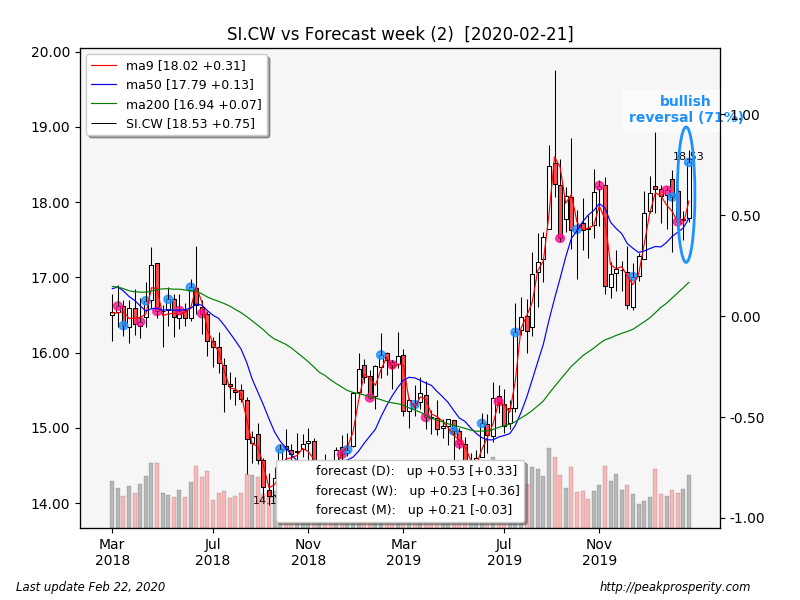 GDX screamed higher, up +8.27% on extremely heavy volume, and GDXJ did even better, up +9.76% on very heavy volume also. XAU jumped +8.87%, the confirmed bullish nr7 candle was a reasonably strong bullish reversal (47%), and forecaster climbed, rising back into an uptrend. XAU is now back in a very strong uptrend in all three timeframes.

This week, the miners executed a very convincing break above the previous high set back in January, and they are right up against the multi-year high set back in 2016. A close above that 2016 high could lead to some real fireworks. 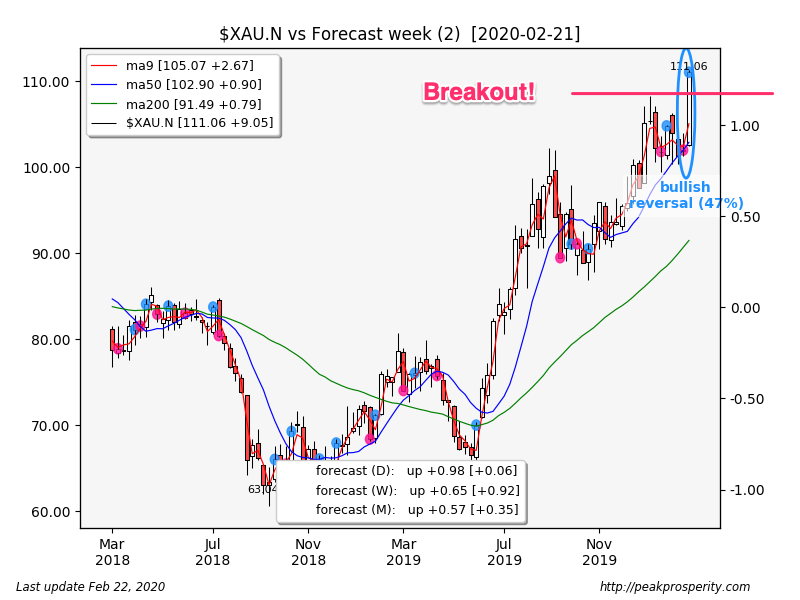 Copper was unchanged at 2.60 on heavy volume. The high wave candle was a bullish continuation, and forecaster climbed into a state of no-trend. Copper is in a mild uptrend in just the monthly timeframe, and in a state of no-trend in the daily and weekly timeframes. It sure looks like a dead cat bounce to me – a bounce that has just run out of steam. To mix a metaphor. 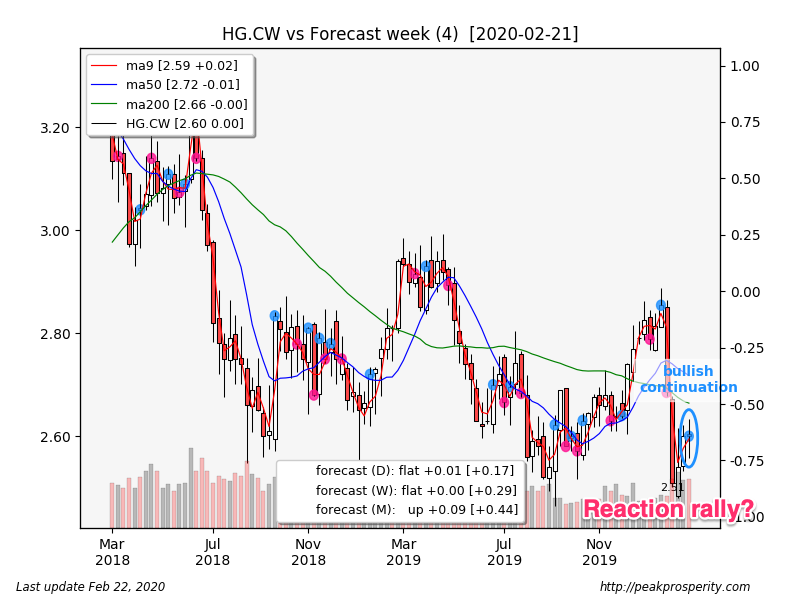 The buck rose +0.15 [+0.15%] to 98.89 on very heavy volume. The shooting star candle was a bullish continuation, and while forecaster dropped, it remains in a strong uptrend. The buck is in an uptrend in the weekly and monthly timeframes.

The daily forecaster reversed sharply after Friday’s big dollar smash [-0.60%]. The daily swing high print was also a reasonably strong bearish reversal (46%). Has the buck topped out or is it just taking a break after a long run higher? My feeling: its just a reaction decline in an uptrend. 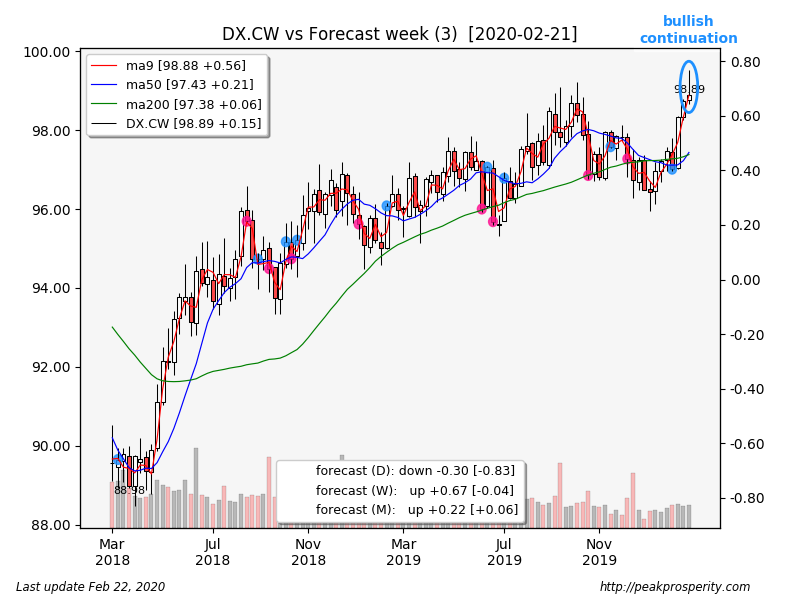 Crude rose +0.91 [+1.73%] to 53.55 on moderate volume. The spinning top candle was a bullish continuation, forecaster climbed, rising into an uptrend. Crude is in an uptrend in the weekly and monthly timeframes. 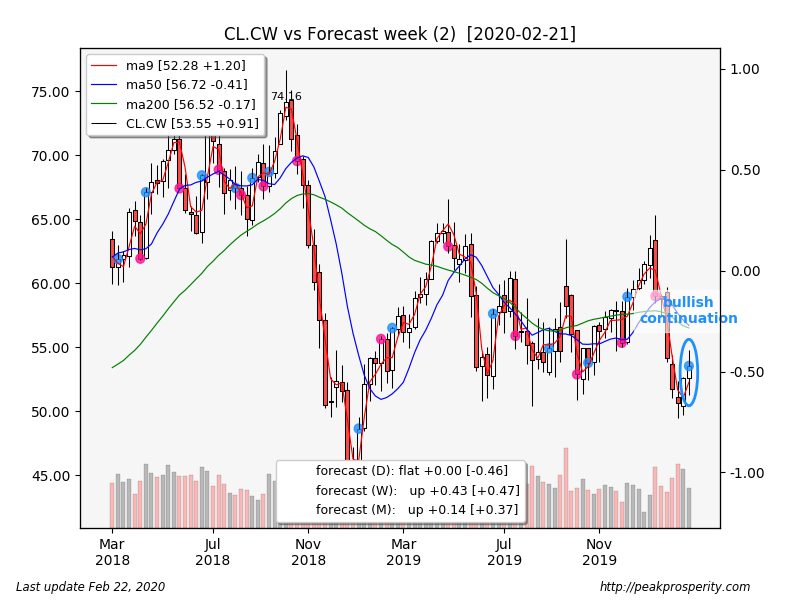 SPX fell -42.41 [-1.25%] to 3337.75 on moderate volume. The bearish harami candle was a possible bearish reversal (38%), forecaster dropped, falling into a downtrend. SPX is now in a downtrend in both the daily and weekly timeframes. 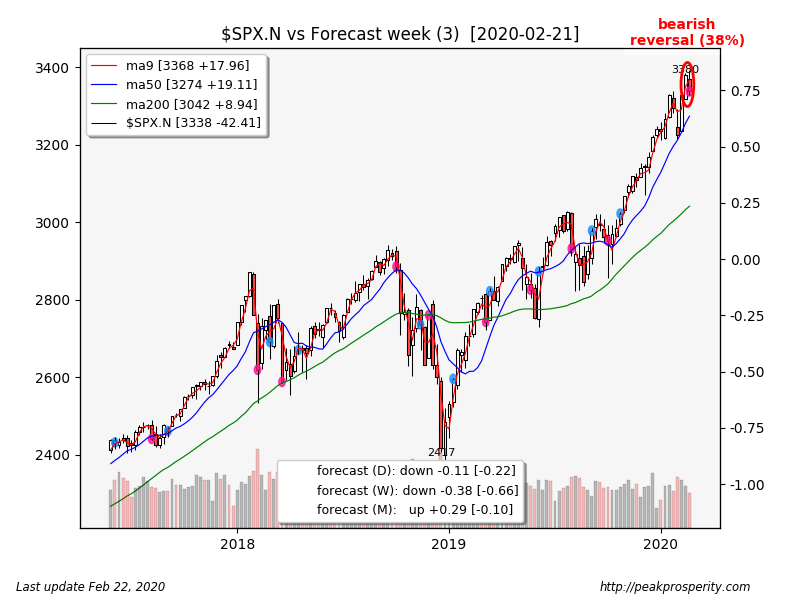 Looks like a bearish reversal to me; that sector map is about as bearish as it gets.

TLT rallied +2.41%. The long white candle was a bullish continuation, and forecaster climbed, moving higher into its uptrend. TLT is in an uptrend in the daily and weekly timeframes. The 30-Year yield fell -12.0 bp to +1.92%. This week marks a new high for TLT.

TY climbed +0.63%. The long white candle was a bullish continuation, forecaster climbed, moving higher into its uptrend. TY is in a strong uptrend in all three timeframes. The 10-Year yield fell -12.0 bp to +1.47%.

The strong moves in bonds this week was a clear sign of a flight to safety. 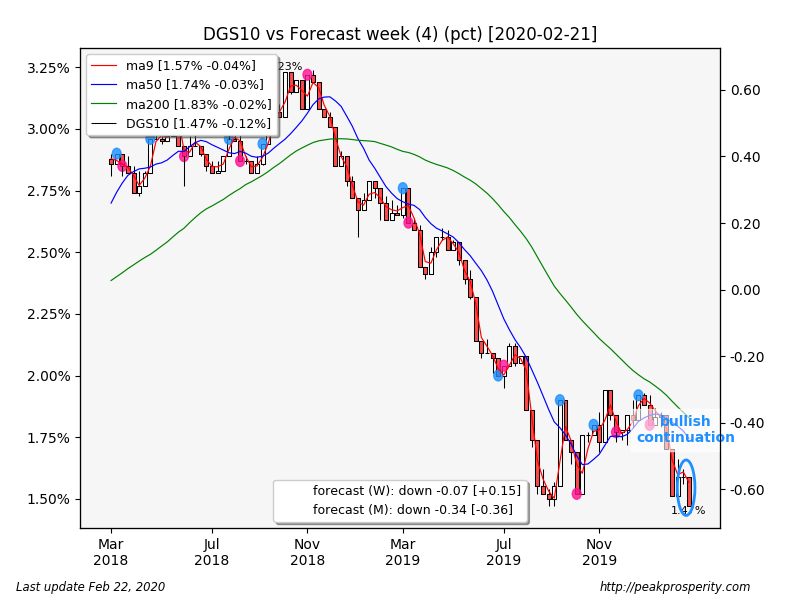 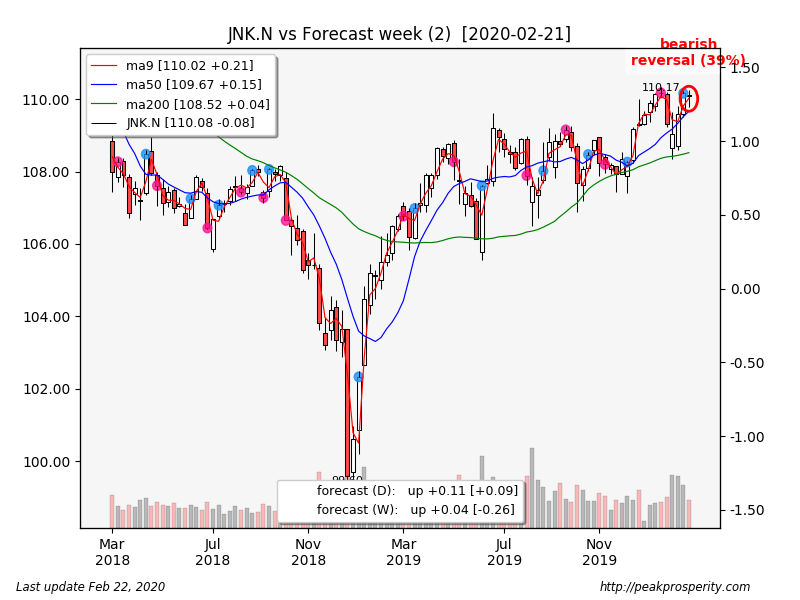 The GLD ETF tonnage on hand climbed +9.95 tons, with 934 tons remaining in inventory.

No shortages of physical gold this week.

The PM sector made a strong bullish move this week: gold made a 6-year high, miners made a 3-year high, while silver broke out to a 2-month high. Bonds rallied also, driving the 10-year yield to a new 4-year low of 1.47%.

Sitting in the middle was copper, crude, and crappy debt. After rallying for two weeks, copper appears as though it might have run out of steam. Crude moved higher, but also fell harder previously. Crappy debt appears to be levitating just below the highs.

Selling off: equities, which printed a moderate bearish reversal, and the daily & weekly forecasters are predicting a move lower. It hasn’t become serious yet; VIX is only 17 and change. But Friday’s morning decline wasn’t bought. It feels as though the jig may be up – or at least, close to up. Of course that may just be me seeing what I expect, but if you look at Friday’s action vs Thursday’s action, it definitely feels more bearish. And Friday’s sector map – bearish as it gets, with tech leading lower, and utilities doing best.

Then there’s the currency markets. AUD/USD is at an 11-year low. While copper might be on the fence about a China recovery, AUD has no doubts – there is no recovery. JPY also had a very bad week, and EUR made a 3-year low before rebounding on Friday.

This week, money ran into PM, bonds, and the USD. It is showing cautious signs of leaving equities, and is uncertain about crappy debt.

How extensive will the economic effects of COVID-19 be on the world economy? That’s a known unknown right now. How big is the list of unknown-unknowns? Heh. Well, we don’t know, do we?

It is much easier to get than the flu, it is (at least) 20x more deadly, we have no immunity, there is no vaccine, and right now, there is only a possibility of a treatment.

Since my area is markets – I’ll stick to market effects. I believe … winter is coming. What form will it take? The unknown-unknown effects of a pandemic on a heavily indebted, just-in-time “efficient” economy with scant stocks and social media after a 10-year search for yield with a stock market priced to perfection? Since we don’t have a historical case study to point out – we just don’t know the form it will take.

Got a question….and it really means nothing, but have we ever seen a major stock market decline in the spring or summer? I can’t think of any but I really wouldn’t know.

I hope silver can get on board soon. It’s been rejected so many times at these levels that we have been programed to think it will fail again. The miners might just disagree, though. They really ripped this week.

Thanks for the great commentary. You made my weekend….J

Yeah, they really are leaning on silver right now.  Huge increase in OI.

Once the thing breaks loose though, all that short interest will work in reverse.  I just have no idea when that might be.

When silver starts to run – really – $1 days.  Repeatedly.  I’m out right now, my broker kept telling me my mini SI futures were about to expire, so I sold.  Sadly.  But what can you do?

Oh sorry – I was non-responsive to your question.  Decline in spring (in percent):

One of my favorite videos:

“There are known-knowns.  There are things we know we know….”

Thanks DF, you are the man. Those are some significant declines.

I wanted to thank you for your UAL idea, too. I bought some March OTM puts at 75 when UAL bounced to 81 last week. They are in ITM now! Mucho Gracias!

I hope you got in on UAL too (or I’m going to feel like a real ass).

Your XLF puts look like they should be performing nicely today.

I hope silver can get on board soon. It’s been rejected so many times at these levels that we have been programed to think it will fail again. The miners might just disagree, though. They really ripped this week.

Tell me about it! I went with silver again this time round when in hindsight miners or even gold would’ve been better (risk/reward). As Dave says, someday it should play some proper catch-up.

Just wondering again why silver lags / is lent on the most. The obvious versus gold is the smaller size of the market, but if there’s manipulation at play then why hasn’t a lid been kept on the relatively small palladium and rhodium markets too? Their all time high headlines must be costing the cause. AFAIK the rhodium market is tiny so surely easy enough to keep the price down from the all time highs. Or is paper not in control of that market and would they have to actually stump up the metal to quell the price?

Yeah, UAL was a small position, but up nicely.

My best one was XLK.  I picked that up a bit later, once I remembered that it tends to move even faster than XLF on the downside.  XLK: supply chain, XLF: banking crisis, and both of them tend to lead on the way down.

Its probably the largest single-day gain I’ve seen in this account.  I may have overdone the puts…my initial buy was small, but then I just kept adding as time passed.

I’m guessing they are really raining contracts down on both gold & silver at COMEX.  They need to do that to keep SPX from falling more – my guess.

One of my favorite movies! Though the idiot savant, Mr Gardner, doesn’t mention that a lot of us won’t survive the winter, or will be ravaged beyond recognition. See you on the other side boys and girls!

”Happy Hunger Games! And may the odds be ever in your favor.”

Good run for gold, silver, and the miners lately.  Silver looks to be starting to catch up today.  Just took off over the last couple of hours.  Equities slaughtered, along with crude.  10 year is crushing it.  No way the Fed can sit back and watch this train wreck without sending out some speakers soon.

That’s why I usually only post when things are looking bad.  Gold and silver hammered almost as soon as I posted.  Can’t wait to see the OI today.  Going to be huge volume, I bet.