It sure looked like traders were moving towards safety going into the weekend.

The metals sector map was bearish for PM; silver led gold lower, and the miners led the metals lower. Copper did best, with platinum a close second. Gold/Euros was actually positive, which suggests that all of gold’s plunge this week was just a currency effect from a rallying dollar. Even with copper’s rally, it remains below all 3 moving averages – copper has yet to reverse direction, while both gold and silver remain above all 3 moving averages. At the moment, there is no bearish reversal yet for PM.

This week, gold plunged -18.79 [-1.18%] to 1574.90 on moderately light volume. The long black candle was a reasonably strong bearish reversal (40%), forecaster dropped, but remains in an uptrend. Gold is in an uptrend in the weekly and monthly timeframes, and the monthly uptrend for gold remains reasonably strong.

Futures markets are projecting a 11.1% percent chance of a rate cut at the next FOMC meeting. 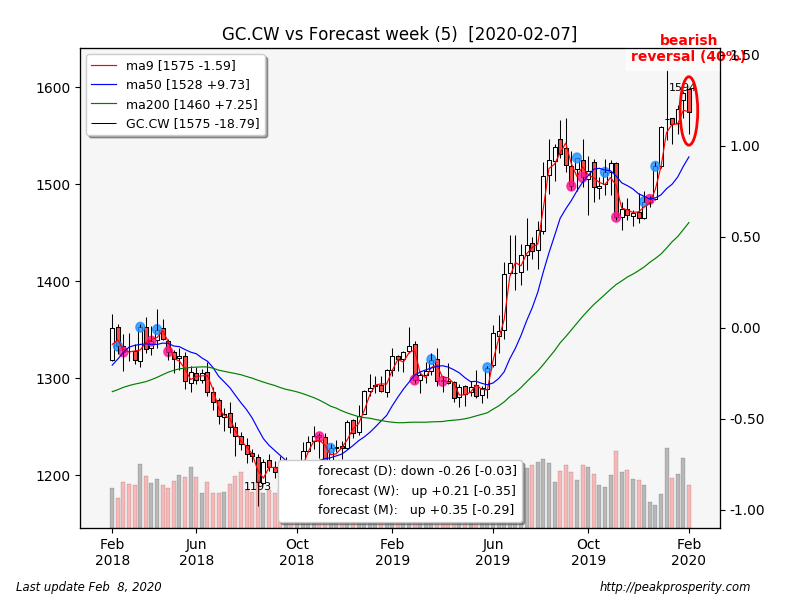 Silver fell -0.33 [-1.83%] to 17.74 on moderate volume. The short black candle was unrated, and forecaster moved lower, dropping into a downtrend. Silver is now in a downtrend in both the weekly and monthly timeframes. All the trends (both up, and down) remain pretty feeble; silver really could go either way. 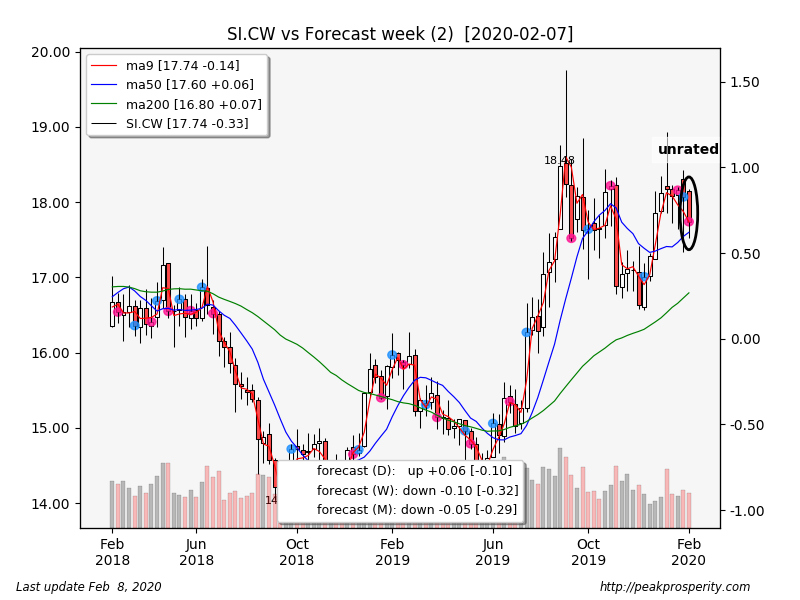 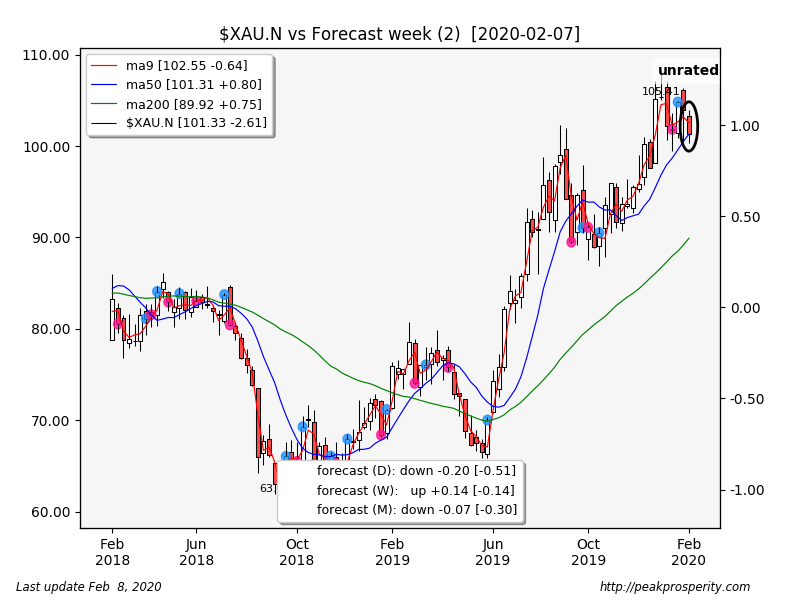 This week, copper tried to rally, but the rally largely failed – mostly because of a brisk correction [-1.96%] on Friday. Copper’s thrusting pattern was a possible bullish reversal (39%), and forecaster climbed, but remains in a strong downtrend. Copper is in a downtrend in all 3 timeframes. 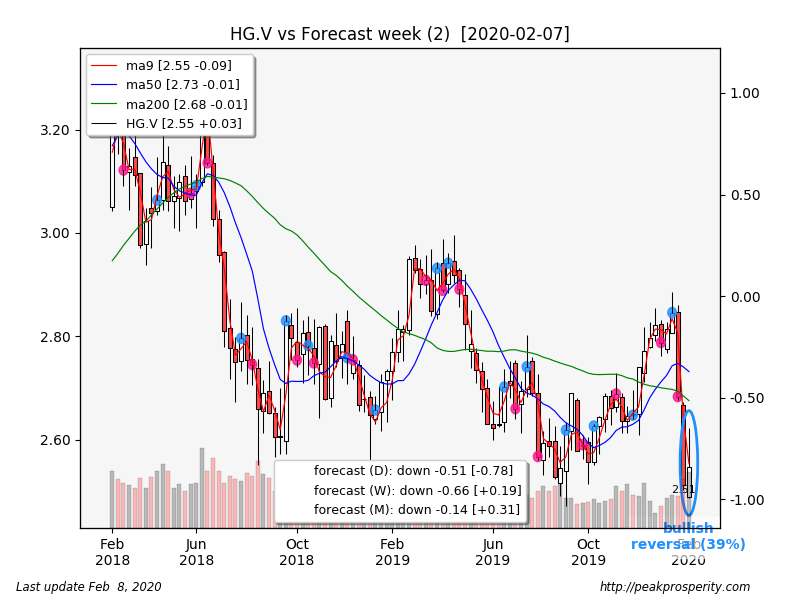 The buck shot up +1.33 [+1.37%] to 98.34 on moderate volume. The white marubozu candle was a bullish continuation, and forecaster climbed, moving higher into its uptrend. The buck is in an uptrend in all three timeframes. The buck broke above a number of previous highs, and now appears on track to – perhaps – break out to new highs next week.

That’s a very curious pattern of currency moves. I’d normally say a dollar rally was safe-haven-related, but JPY fell too, which is also normally a safe haven currency too. 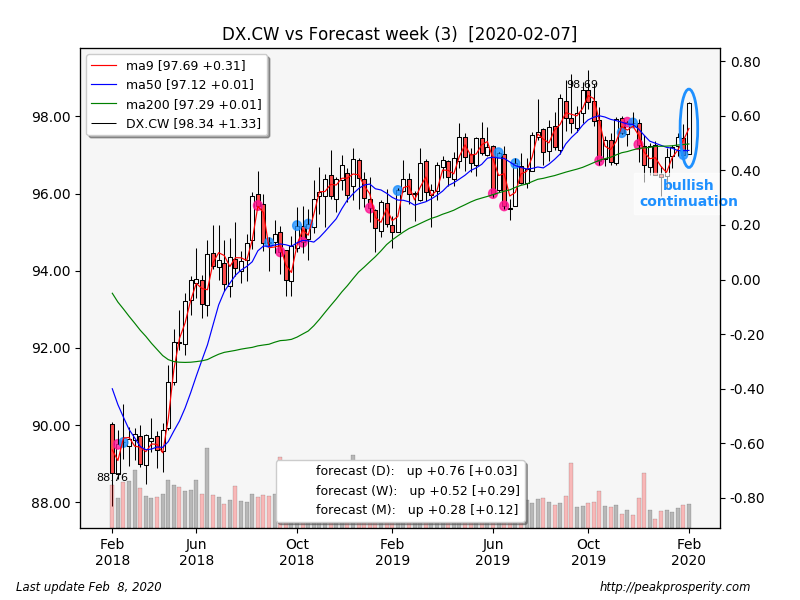 Crude fell -1.11 [-2.14%] to 50.64 on moderately heavy volume. The short black/spinning top candle was a bearish continuation, and forecaster dropped, moving deeper into its downtrend. Crude is in a downtrend in both the weekly and monthly timeframes.

This week crude attempted to rally, but the attempted rebound didn’t even show up on the weekly chart. No bullish reversal for crude.

The EIA report was bearish: crude +3.4m, gasoline -0.1m, distillates -1.5m, but these days, crude’s price moves are all about concerns over plunging demand from China as a result of the corona virus. 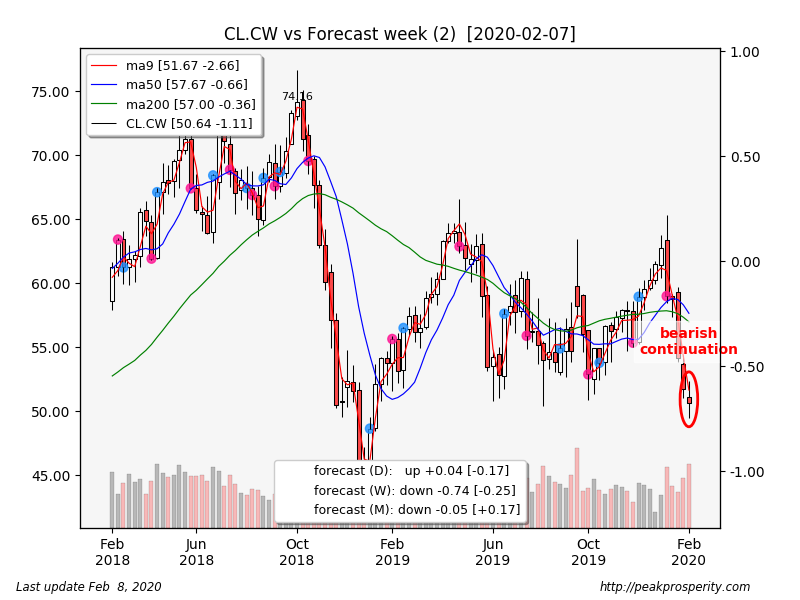 SPX shot up +102.19 [+3.17%] to 3327.71 on moderate volume. The long white candle was a bullish continuation, and forecaster climbed, moving higher into its uptrend. SPX is in an uptrend in all three timeframes. This week’s rally in SPX wiped out the last two weeks of decline, and SPX also made a new all time high on Thursday. However on Friday, SPX printed a swing high which was a likely bearish reversal (58%) – but only on the daily chart. 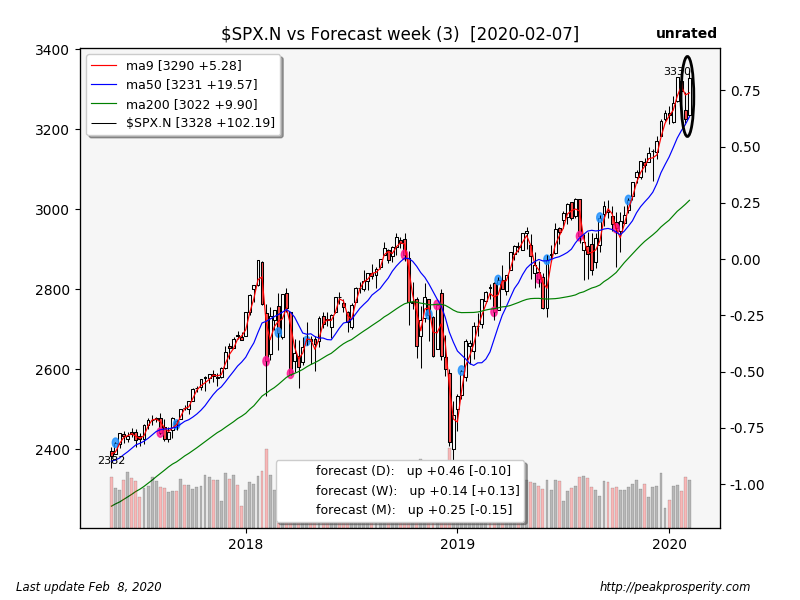 TLT fell -1.01%. The bearish harami candle was neutral, and forecaster moved lower, but remains in an uptrend. TLT is in an uptrend in the daily and weekly timeframes. The 30-Year yield rose +5.0 bp to +2.04%. TLT sold off fairly hard this week, but rallied sharply on Friday, eliminating much of the loss.

TY dropped -0.57%. The bearish harami candle was neutral, and forecaster fell, but remains in an uptrend. TY is in an uptrend in the weekly and monthly timeframes. The 10-Year yield rose +6.0 bp to +1.57%. TY also fell this week, but printed a reasonably bullish daily swing low pattern on Friday (49%). 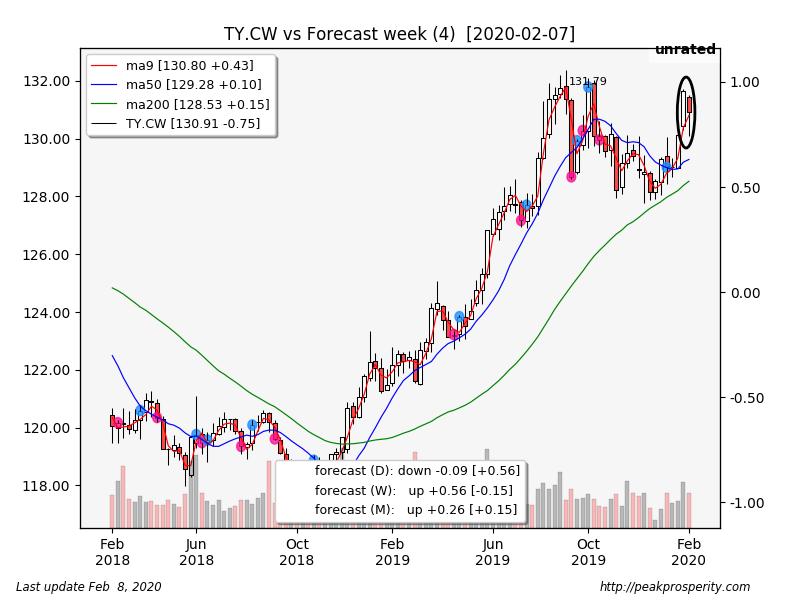 JNK climbed +0.51%. The long white candle was a bullish continuation, and forecaster climbed, but remains in a downtrend. JNK is in an uptrend in the daily timeframe. JNK rallied strongly this week, right along with SPX, but there was no daily-chart reversal on Friday for JNK. 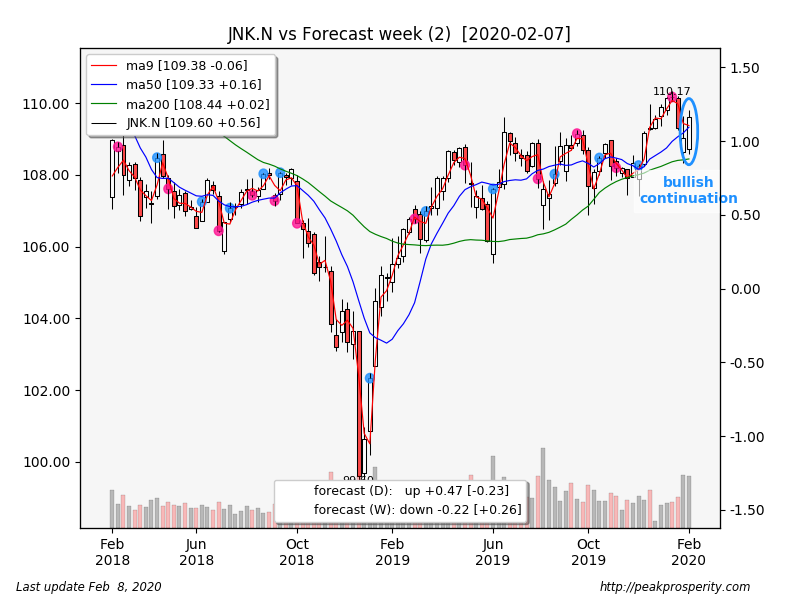 The GLD ETF tonnage on hand climbed +12.87 tons, with 916 tons remaining in inventory.

Coronavirus led the news, with equity-market rallies caused by rumors of a possible vaccine, a possible treatment, a possible decline in the rate of increases of cases in China, all of which I think is just a load of crap. My opinion, of course, but – the insiders sure do like to sell at the highs, rather than into some massive decline.

Meanwhile, my two indicators (copper & crude) continue to look reasonably unhappy, with crude looking the worst – crude made new lows without even a hint of a weekly-chart rebound.

The dollar rally is interesting. The buck started to move higher on the day the US declared a ban on travelers from China (as well as a mandatory quarantine on all US citizens coming from China), and the dollar rally just hasn’t stopped. As things get more serious, money may flow to places viewed as safe havens from the virus.

Related: I believe that there will be an undetected pandemic starting in the third world, where Chinese visitors have gone, but who are unable to detect the virus simply because they don’t have the technology to do so. The paper I read last week projected that the impact on the developing world will be much larger than in the more advanced nations – both in terms of deaths, as well as economics and currency effects.

Adding fuel to this situation are all those Belt & Road projects. For each project, China basically loans money to the third world nation, which then hires Chinese workers to go build infrastructure with the borrowed money. Those Chinese workers are a pandemic source for sure. How popular will Belt & Road be six months from now? And can a pandemic-afflicted third world nation hope to pay back these loans? Remember, the third world nations won’t detect the pandemic themselves – we will only know about this situation when the first world detects cases coming from these nations.

It occurs to me: we may have just witnessed Peak China.

Last point. Bitcoin is looking very strong. This is suggesting to me that capital controls are on the way. Bitcoin is the remedy for that; I suspect big money is moving into bitcoin in advance of this situation. 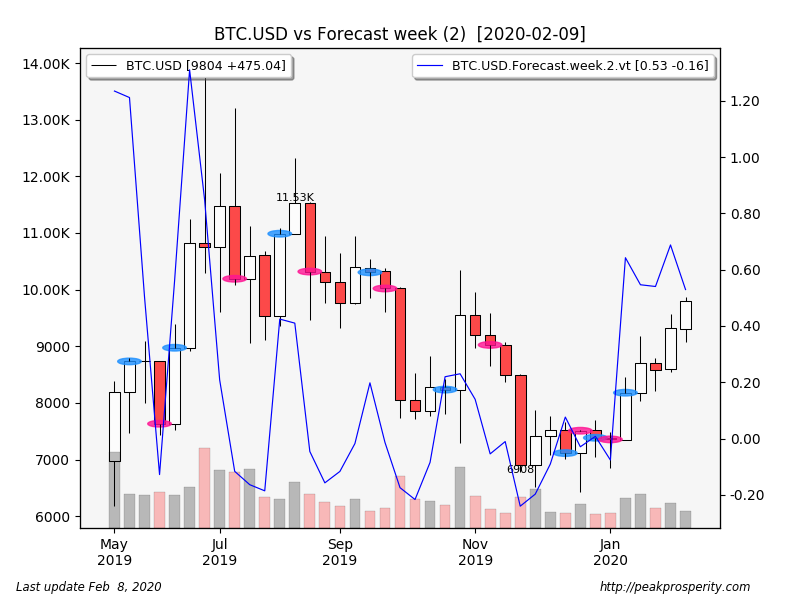 Worth 40 minutes I think.