It sure looks like traders didn’t want to hold risk assets going into the weekend.

The exception to Friday’s safe haven move was a plunge in the buck; that was unexpected, at least by me – normally the buck is a safe haven currency. The large dollar plunge was due to a strong rally in EUR, GBP, and JPY.

The CCP was not amused. “You guys are being mean.” Literally, that’s what they said.

And yet – any bets as to how quickly the CCP would ban visitors from another country that was in such a predicament? Other mainlanders won’t even fly with people they suspect are from Wuhan – apparently folks from Wuhan speak Chinese with a recognizable accent. And there are a fair number of reports of home-made barriers constructed around villages (in China) complete with “if you leave, don’t come back” signs.

The metals sector map shows gold leading silver, and the metals led the miners. Copper was at the bottom, all red, while gold and the miners remain above all 3 moving averages. The sector map is showing a clear safe haven move.

This week, gold rose +16.49 [+1.05%] to 1593.69 on moderate volume. The spinning top candle was a bullish continuation, and forecaster climbed, moving higher into its uptrend. Gold is in a strong uptrend in all three timeframes. Gold made a new 7-year weekly closing high to levels set back in early 2013. The gold uptrends, especially the longer term trends, are quite strong.

COMEX GC open interest fell -13K contracts on Friday, and fell -132K contracts this week. That was -44 days of global annual production in paper removed from the market. Current open interest for GC: 62% of global annual production, down -12.26% this week. This week we saw a massive drop in open interest. What does it mean? Is it about the January contract roll, which also happened this week? Or are the commercials bailing out of their short positions wholesale because they are terrified of a corona-virus-driven breakout? The latter would be quite a bullish signal. This is something important to watch for next week once the contract roll is past.

The futures markets are projecting a 27% chance of a rate cut at the 18 March meeting. 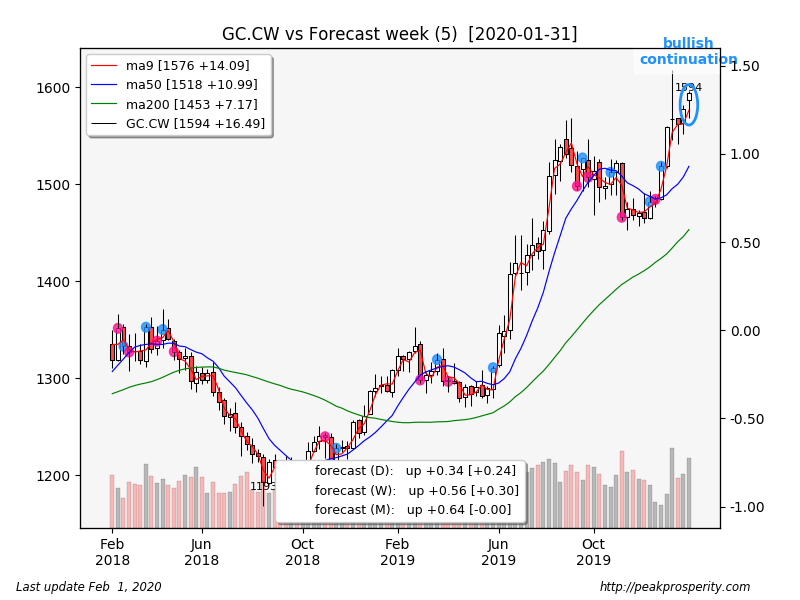 Silver fell -0.09 [-0.50%] to 18.07 on moderately light volume. The long black candle was a possible bearish reversal (31%), but forecaster climbed, rising into an uptrend. Silver is back in an uptrend in all three timeframes. Silver’s plunge on Wednesday was almost entirely erased by end of week. I think that’s a positive sign for silver. 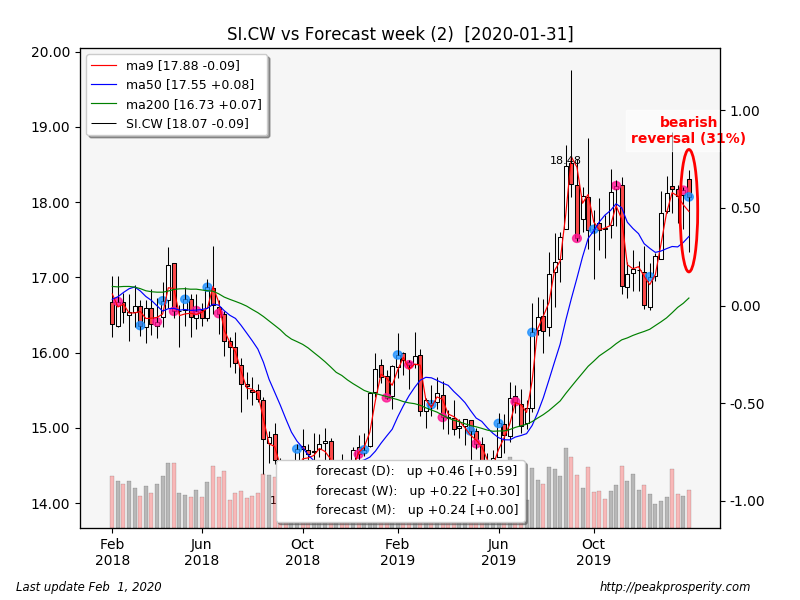 GDX fell -0.79% on moderate volume, and GDXJ fell -0.60% on moderate volume. XAU fell -0.84%, the spinning top candle was a low-percentage bearish reversal (29%), forecaster climbed, moving higher into its uptrend. XAU is in an uptrend in all three timeframes. 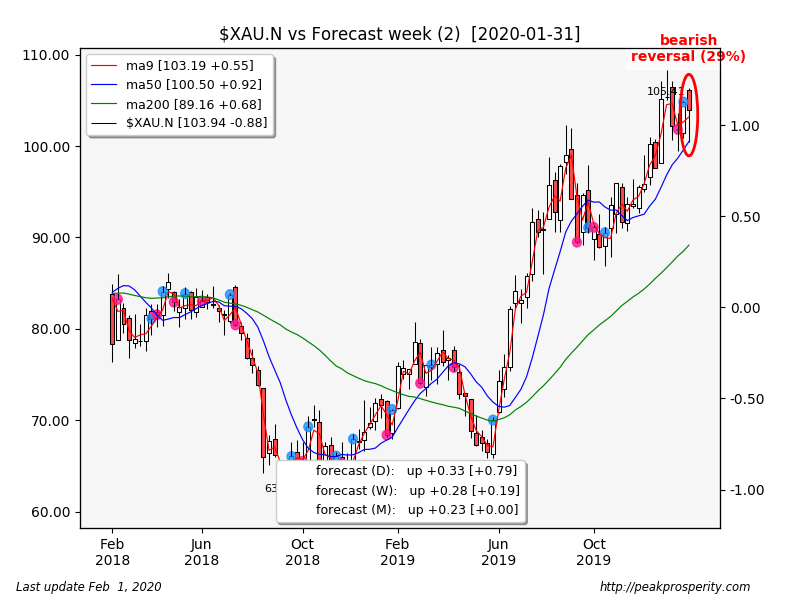 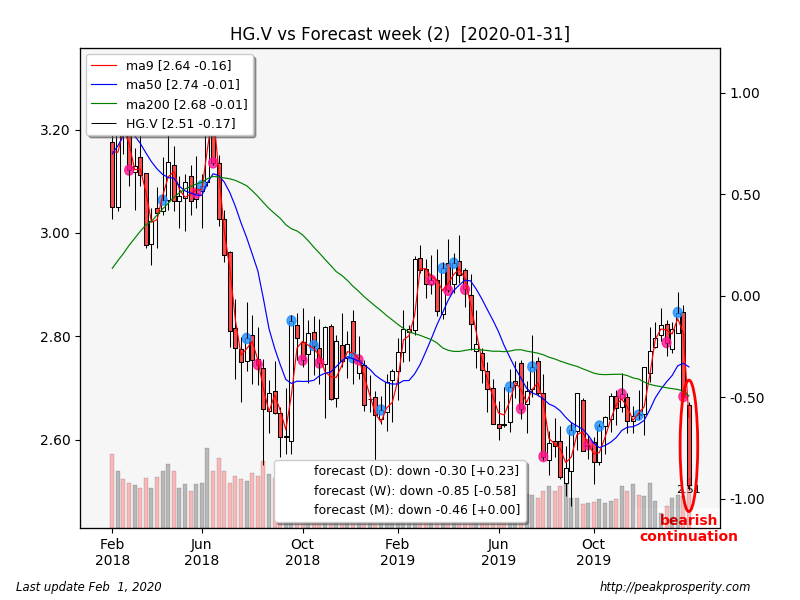 The buck fell -0.46 [-0.47%] to 97.01 on very heavy volume. The closing black marubozu candle was neutral, but forecaster climbed, surprisingly moving into an uptrend. The buck is now in an uptrend in all three timeframes. In spite of the happy framing from the forecasters, I’m more than a little concerned that the buck executed a bearish reversal on Friday. 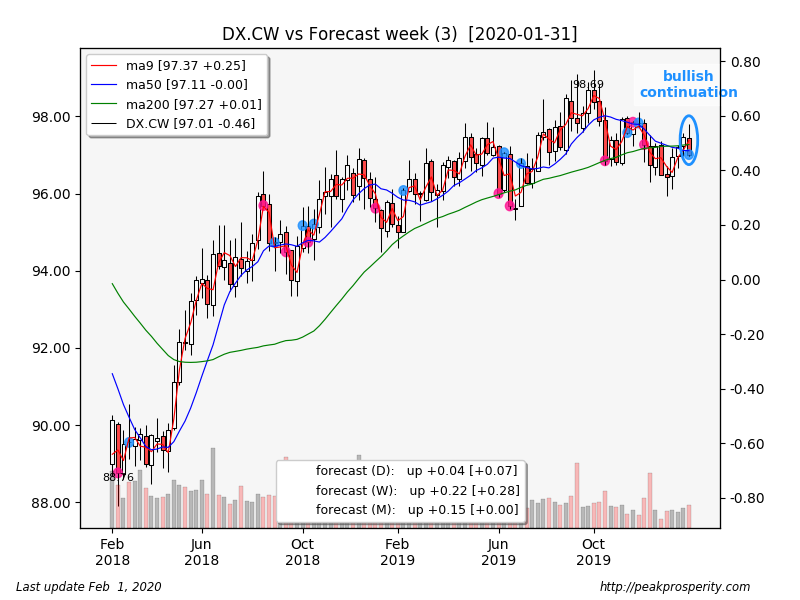 Crude plunged -2.45 [-4.52%] to 51.75 on heavy volume. The long black candle was a bearish continuation, and forecaster dropped, moving deeper into its downtrend. Crude remains in a downtrend in all three timeframes.

Crude’s daily and weekly downtrends are quite strong. It looks an awful lot like copper at this point. 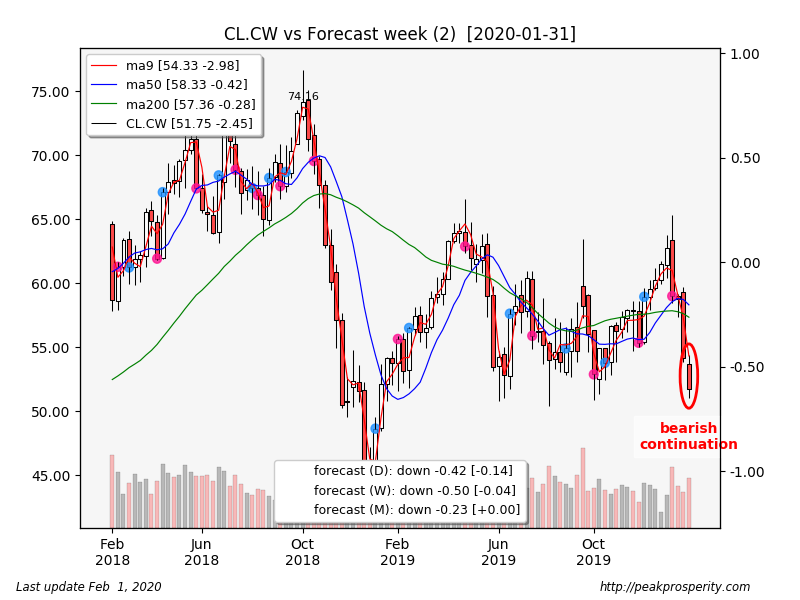 SPX plunged -69.95 [-2.12%] to 3225.52 on heavy volume. The swing high candle was a probable bearish reversal (59%), and forecaster dropped, and has moved into a state of no-trend. SPX is in an uptrend in just the monthly timeframe. This week was probably a bearish reversal for equities. 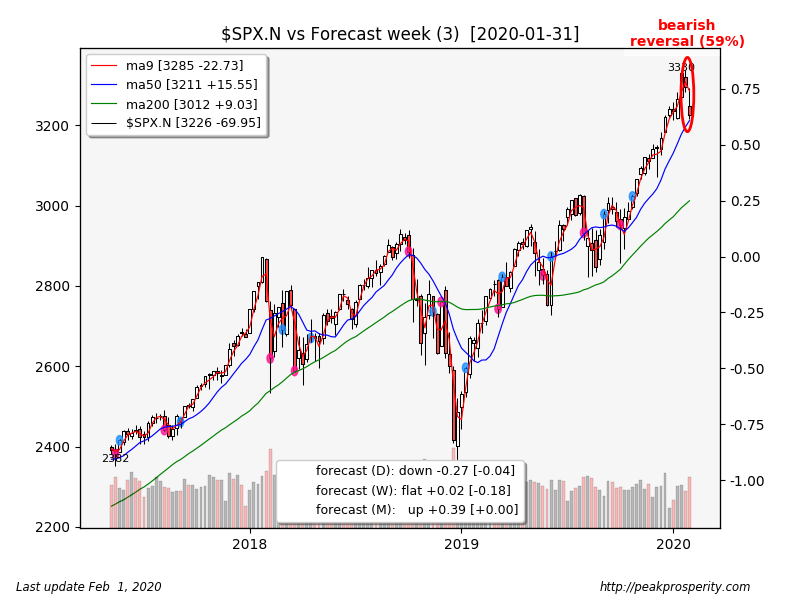 TLT rallied +2.69%. The long white candle was a bullish continuation, and forecaster climbed, moving higher into its uptrend. TLT is in a strong uptrend in both the daily and weekly timeframes. The 30-Year yield fell -13.0 bp to +2.01%.

TY climbed +1.18%. The long white candle was a bullish continuation, and forecaster moved higher into its uptrend. TY remains in an uptrend in all three timeframes. The 10-Year yield plunged -19.0 bp to +1.51%.

Money is flooding into the 10 and 30 year US treasury debt.  TY appears to be on the cusp of a breakout to new highs. 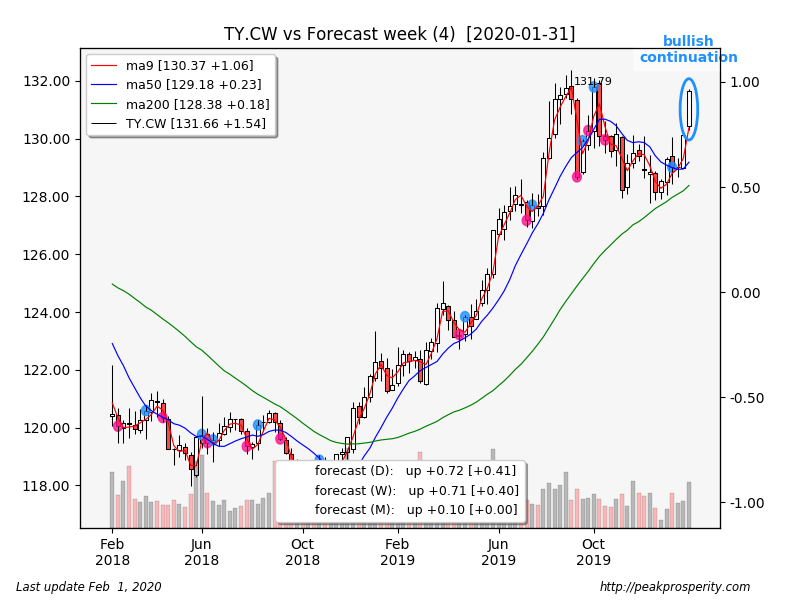 JNK fell -0.24% this week. The long white candle was a possible bullish reversal (36%) but forecaster dropped, moving deeper into its downtrend. JNK is in a downtrend in both the daily and weekly timeframes.

The GLD ETF tonnage on hand climbed +2.63 tons, with 903 tons remaining in inventory.

While there was a bounce in risk assets mid-week, by Friday the market had realized that the WHO declaring a PHEIC didn’t actually change the facts on the ground in the PRC, which continue to get progressively worse. When the CDC declared a public health emergency and imposed a mandatory 14-day quarantine on all travelers from China – that seemed to remove all doubt.

As a result, on Friday there were new lows in SPX, crude, copper, and platinum, alongside new highs in the 10 and 30 year bonds, as well as gold. Money was clearly looking for safety ahead of the weekend.

The FOMC meeting on Wednesday was a footnote; there was no rate increase, and Powell more or less admitted to wanting more inflation. Apparently none of the 1000 PhD economists working for the Fed have been able to figure out that the bipartisan, 30-year policy of sending jobs overseas while at the same time allowing in 20 million low-wage illegals ends up lowering wages for labor, resulting in that “low inflation” the Fed claims to hate so much.

“I’m shocked, simply shocked to find out there is gambling going on here!”

Gold’s uptrend is quite strong. The plunge in GC open interest could be signaling that the commercials are getting out of the way of the multi-month gold rally that would likely emerge in the wake of a pandemic. We’ll know more next week once the effects of the January contract roll have passed. If the OI drops next week too, that suggests to me that gold could well break out above 1900 within the next few months.

Lastly, the forecaster weekly sector map (below) shows the “safe haven move” state of affairs quite clearly. There is one curiosity, however: after some early hesitation, bitcoin is doing exceptionally well. Does this mean bitcoin is a safe haven after all?

I don’t think so. Still, bitcoin remains a mechanism for people to dodge capital controls, and I’m just guessing the PBOC is being very strict about money transfers out of the country, in order to keep the RMB from cratering.

Once trading restarts in RMB next week, I have no idea how far it willl drop. A plunge in CNY/USD will impact all Chinese companies that have borrowed in dollars, and will now have to make payments from their income that will a) drop due to the impact of the virus, and b) be denominated in plunging RMB, not USD. Some amount of this debt will default. From what I understand, there are trillions in USD-denominated debt borrowed by Chinese companies. “Run, don’t walk.”

I think this whole event is still in the very early stages. 3 months from now, we will look back and say, “what were we thinking?  The trade was so obvious!”

Assuming we survive the event, of course.

As you said, China basically complaining about the restrictions in the above article. “But, guys, the WHO said everything is fine, why are you restricting flights/travel?” . After everything I have seen from the CCP from the Falon Gong and Uighur organ harvesting, to the confiscation of wealth, to the social control, to everything else, I think the main destabilizing factor in the world today is the CCP. I can only hope that people start seriously talking about the CCP losing the mandate of Heaven and finally kick them to the curb.

Laowhy86 provides a really good timeline that underscores your points about the CCP.

They are the ones that first suppressed information about the virus (arresting journalists reporting on the situation) and they have now thrown the (order-following CCP) mayor of Wuhan under the bus so they can avoid the blame for the initial coverup.

Laowhy86 is clearly someone wanting to make money from reporting anything that is scaremongering about the Coronavirus. It is difficult to believe him. I for one will not support the notion that CCP is bad. I sincerely doubt that America would perform any better.

When you get a chance, can you post updates to your Gold and Silver trading models.

CCP arrested Doctors warning about a new virus in Dec.

It wasn’t long before police detained them. The authorities said these eight doctors and medical technicians were “misinforming” the public, that there was no SARS, that the information was obviously wrong, and that everyone in the city must remain calm. On the first day of 2020, Wuhan police said they had “taken legal measures” against the eight individuals who had “spread rumors.”

Sure, thing.  I’m almost certain had a new virus been detected in the US, the first thing the F-Duh (FDA) would due is to pressure and arrest those physicians making the claims /s. The fact that this outbreak is so bad, is possibly a direct result of the CCP pressuring these medical professionals to remain quiet for weeks. Had the CCP taken them seriously… I guess we’ll just never know and neither will the 60 MILLION people who are quarantined.

I’ve been slaving over a hot stove on these models.  Still trying to sort out what works.  Getting closer, but I really need to backtest them so I’m not just lying to myself (and others) about some fortuitous collection of variables that just happen to work out for the current time period.

Here’s silver, 10-day forecast period.  Sometimes it can be dreadfully wrong.  🙂  But it does seem positive about yesterday’s plunge. 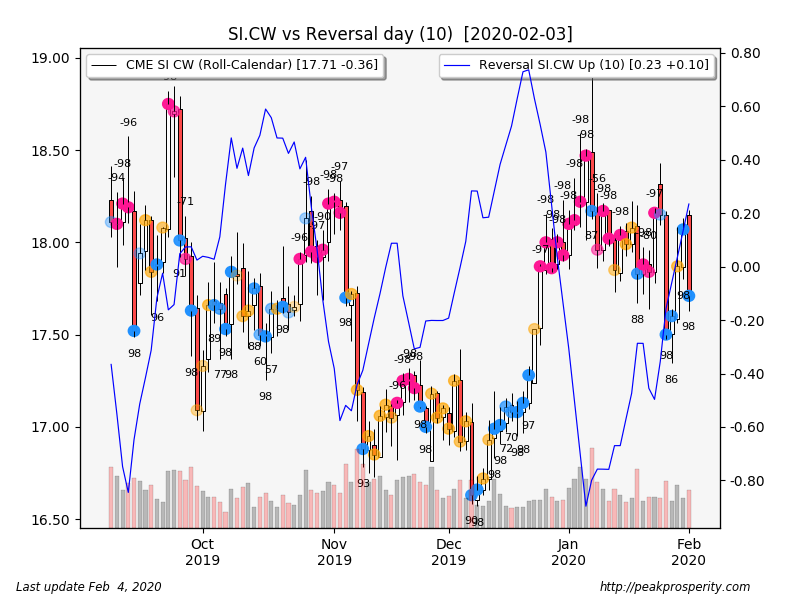