The metals sector map has all PM components above all 3 moving averages. Gold is leading silver, the miners are leading the metal, and the senior miners are leading the juniors. This all suggests a safe haven move. Copper’s near-collapse (and plunge below all 3 moving averages) is all about China, and the fear of the economic impact of the Wuhan virus on the Chinese economy. Platinum seems to be suffering from this as well, but to a lesser extent.

For the week, gold moved up +14.85 [+0.95%] to 1577.20 on very heavy volume. The long white candle was a bullish continuation, forecaster dropped, but remains in an uptrend. Gold remains in an uptrend in all three timeframes, and both daily and monthly trends are quite strong.  This week saw a new weekly 6-year closing high. 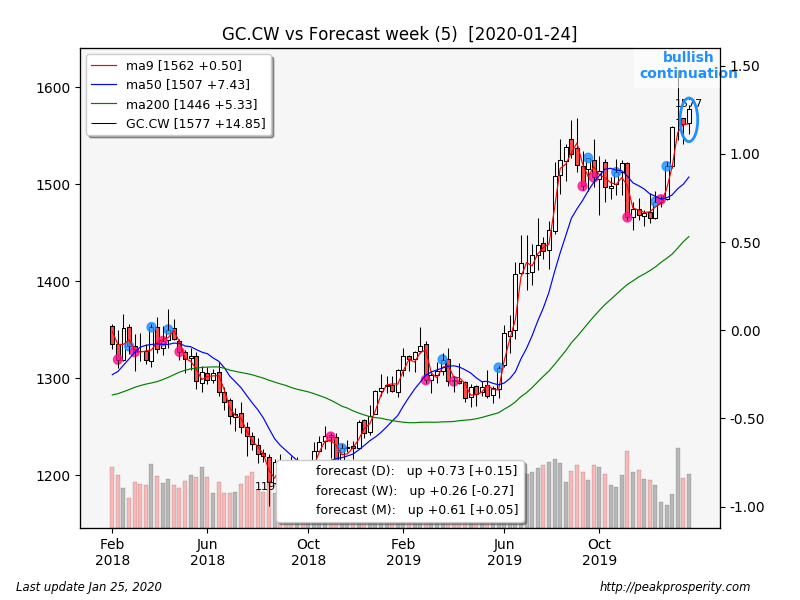 Silver rose +0.08 [+0.44%] to 18.16 on moderate volume. The high wave candle was a bullish continuation, but forecaster fell, dropping into a downtrend. Silver is now in an uptrend in just the daily and monthly timeframes. 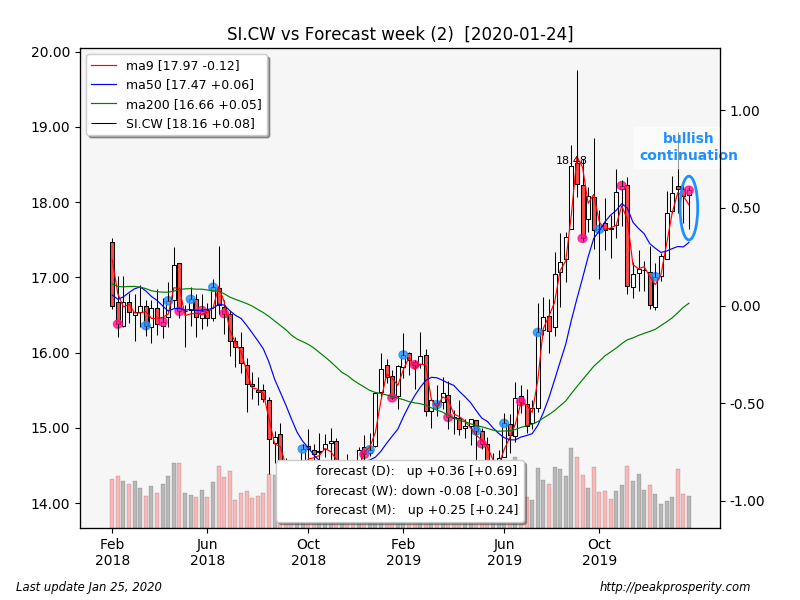 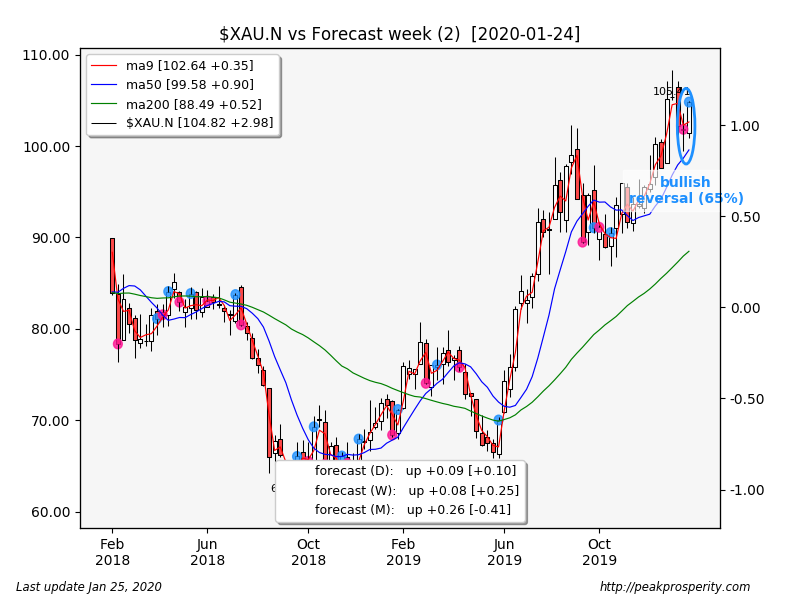 The buck climbed +0.26 [+0.27%] to 97.47 on heavy volume. The short white/nr7 candle was a bullish continuation, and forecaster climbed, but remains in a downtrend. The buck remains in an uptrend in the daily and monthly timeframes. It managed to close back above the 200 MA this week, which is a positive sign. The rough pattern is a safe haven move into the buck. 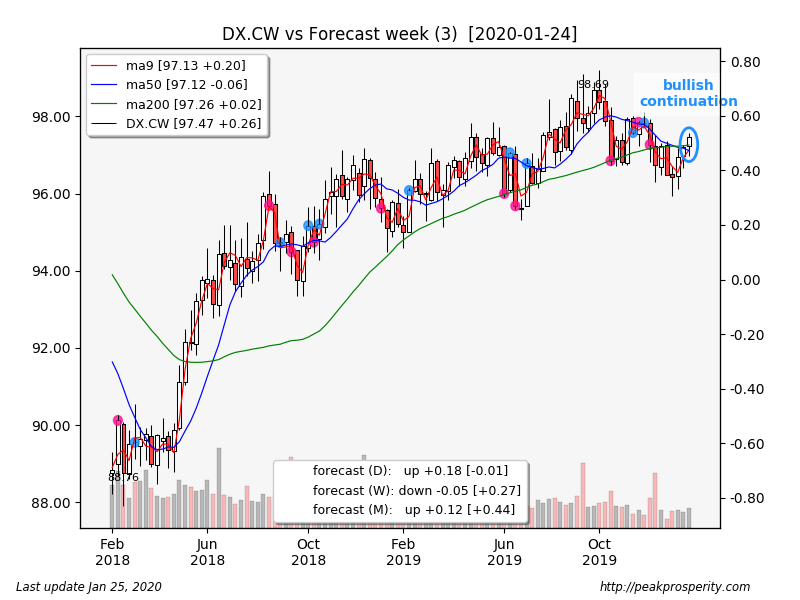 The EIA report was positive: crude -0.4m, gasoline +1.7m, distillates -1.2m, and the report did seem to stop some of the bleeding in crude on Thursday, but concerns over the Wuhan virus and its projected negative impact on demand are currently dominating sentiment in crude. 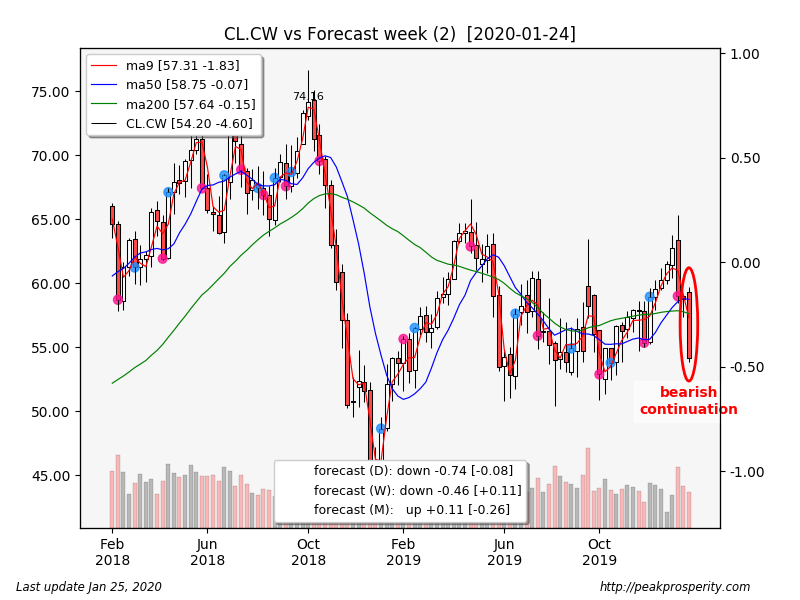 SPX plunged -34.15 [-1.03%] to 3295.47 on moderately heavy volume. Most of the damage happened on Friday. The long black candle was a bullish continuation, and forecaster dropped, but remains in an uptrend. SPX is in an uptrend in the weekly and monthly timeframes.

On Friday, the daily forecaster dropped hard, and entered a downtrend. SPX is belatedly starting to feel the immpact from concerns about the Wuhan virus. 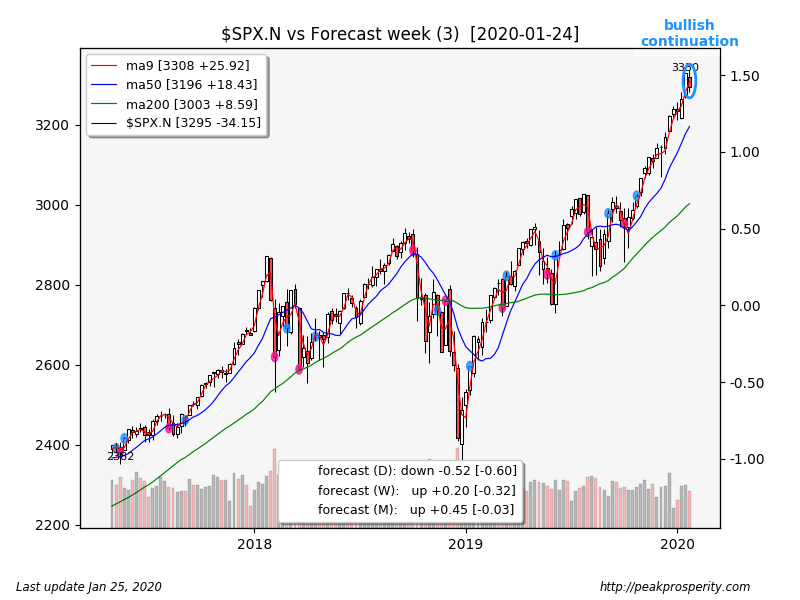 TLT shot up +2.94%. The opening white marubozu candle was a bullish continuation, forecaster climbed, moving higher into its uptrend. TLT is in an uptrend in the daily and weekly timeframes. The 30-Year yield fell -15.0 bp to +2.14%. That’s a large move for the long bond – it broke out to a new 15-week high this week. Two words: Wuhan virus.

TY climbed +0.86%. The opening white marubozu candle was a bullish continuation, and forecaster climbed, moving higher into its uptrend. TY is in an uptrend in the daily and weekly timeframes, and the monthly is starting to reverse back up too. The 10-Year yield fell -14.0 bp to +1.70%. 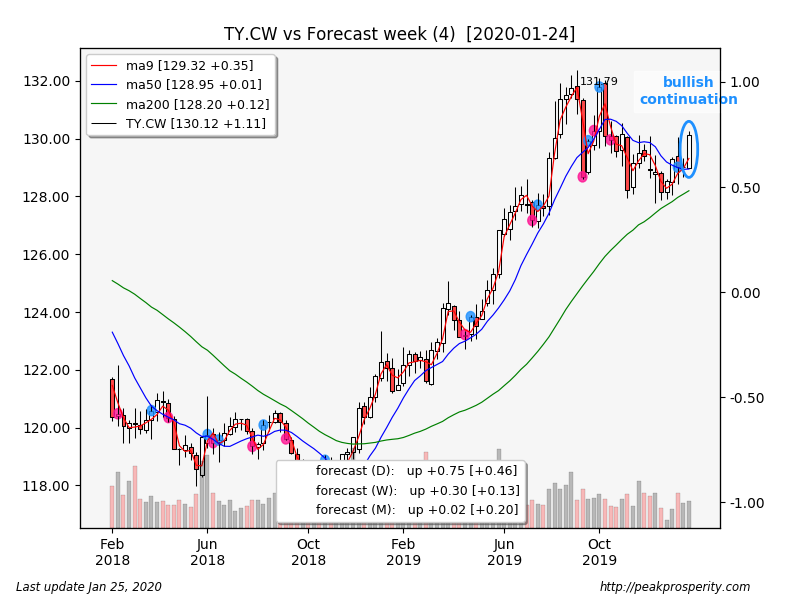 JNK plunged -0.79%. The swing high candle was a likely bearish reversal (72%), and forecaster dropped, moving deeper into its downtrend. JNK is in a strong downtrend in both the daily and weekly timeframes. Wuhan virus again; that swing high pattern had the highest negative rating that the candle code can assign. 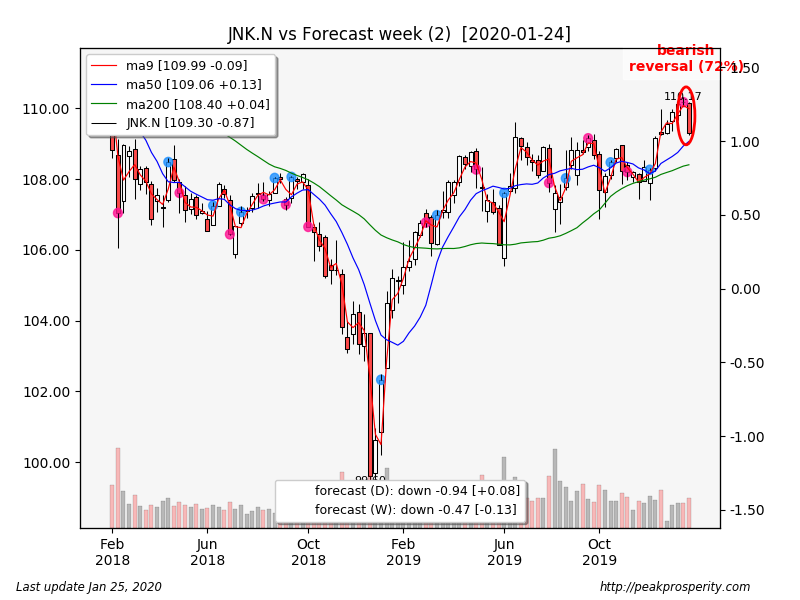 The GLD ETF tonnage on hand climbed +1.76 tons, with 901 tons remaining in inventory.

This week, I believe both JNK and copper were the “coal mine canaries” w.r.t the market direction. The picture is fairly straightforward:

From all I read, I believe we are now experiencing the start of a global pandemic. As one epidemiologist said, “The horse is already out oof the barn.” Since this is a gold & silver column, I will sidestep the personal aspects (i.e., trying to stay alive, better handled elsewhere) and instead I’ll focus on what the economic effects could be.

To assist me in my thinking, I located an analysis done by the Brookings institute back in 2006: “Global Macroeconomic Consequences of Pandemic Influenza.” https://www.brookings.edu/wp-content/uploads/2016/06/200602.pdf

If we posit a “severe” outcome, that suggests a massive drop in Hong Kong’s GDP, which would almost certainly lead to an Asian banking crisis.

Why do I pick “severe”? A whole confluence of things; the extent of the spread of cases worldwide, and China’s decision to literally shut down transport to 12 cities. Perhaps this might be one reason: on Wednesday, before the trains were shut down, 300,000 people departed from the Wuhan train station. Just on Wednesday.

The CCP has information we do not have. My maxim: watch what they do, not what they say.  Their reaction suggests we face a severe scenario, at least.

All the central banks can print money, the governments can engage in deficit spending, but none of it will encourage fearful people to engage in discretionary spending. And traders will race to front-run the hit to confidence; they will sell now while they still can.

What am I doing? On Friday, I bought puts, for the first time in a long time. I’m targeting the banking industry (I’m expecting that banking crisis), as well as the overall SPX, both near term (3 months) and medium-term (6 months). All puts are out of the money. If we get a “moderate” or “severe” outcome in my chosen timeframe, I’d expect a 10x or 20x return. If it all turns out to be nothing, I lose what I put in. I also think the buck will do well, as will the 10-year. Fed will also lower rates, and they will start printing money again too, although I’m not sure this happens at the meeting next week.

Puts give you a disproportionately high reward for “long tail” events that occur during a defined time period.  I think we may be in such a situation right now.

Thanks for the update and I think that was a great insurance policy with the puts. I saw what might be a pre-breakout set up on TLT last week, and with oil killing the reflation-trade. I put some money on it. So far so good. And the silver miners seem to have some life again.

The put options would have been a better strategy than TLT but my platform doesn’t show the implied volatility (Vega) of the contracts, so I didn’t want to buy them blind to that. I’ve got to figure out how to use my options platform.

The market has seemed so ripe for a reversal the last few weeks, it just needed a news catalyst to tip the psychology over to the dark side. Perhaps this is it.

All the best and thanks again for the great work….Jeff

Here’s what I saw on XLF.  I toyed with shorting DB directly, but figured I’d play it safer with the whole industry.

IV for XLF (0.17) is slightly above where it was a few days ago (0.15) but it remains relatively subdued.  XLF puts (at least on Friday) weren’t that expensive.

I like seeing the market actually giving me a signal before jumping in.  When such a signal merges with a gestalt on the whole pandemic thing…not saying its a sure thing trade, but it seems more likely than not to have a shot of being one of those “long tail events”, and the price to participate wasn’t all that high.

We might be 3-5 days ahead of the pack here at PP.  We do generate our share of “false signals”, but I don’t think this is one of them. 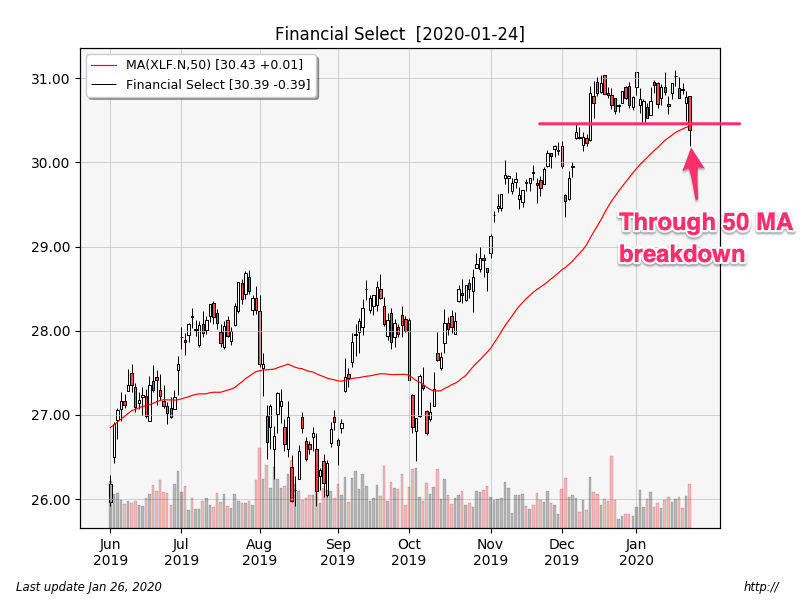 The last two weeks have shown some unbelievable speculative call buying. I read that last week traders bought a record 22.8 million call options to open, surpassing the record the week before at 21.6 million.

And they are not hedging these positions. The Options Speculation Index over at Sentimentrader.com has hit levels not seen since 2000.

Dave, you are the only trader who bought put options, lol.

I’m so jealous of your lone-wolf positioning. Beautiful timing. My hero, Hugh Hendry, would be proud.

The big risk, according to Armstrong, is global governments, including the U.S. Armstrong says, “You have to understand, at some point in time, capital begins to figure out who is the greatest risk, and the risk is government. At that stage in the game, when that point is reached, then you have shifts. The capital will move from public types of investments, such as government bonds and things of that nature, and then will move into the private sector. That’s equities, and that can be gold and real estate in different places. You try to go to tangible assets.”

Well thanks for your kind words; being a lone wolf is all well and good, as long as the rest of the pack joins you before those options expire…  🙂

Hmm.  Sentimentrader.  I wonder what would happen if I integrated their data into my SPX trading model.  I used their service once upon a time…good (contrarian) perspective there.

I am wondering if the risk of a deflationary and fairly rapid “collapse” (which I am anticipating) would make cash a better place in the immediate short term.

Would love suggestions and feedback on that.

* US treasury bonds did very well

* gold did well initially, then sold off because of deleveraging.  (leveraged funds ended up having to sell everything – even their gold holdings)

Safest (right now) for a re-run of 2008 would be an intermediate term (7-10 year) US treasury bond portfolio, plus PHYS; with the understanding that you’d pull the trigger and sell PHYS if gold started to show signs of a strong bearish reversal that was taking place during a strong equity market drop. (i.e. evidence of deleveraging)

Note to self: I should take my own advice.  🙂