This week was entirely dominated by the US-Iran situation. Gold, silver, and crude all shot higher after an Iranian missile launch against a pair of Iraqi airbases, and all 3 items reversed hard when no casualties were caused. Trump gave a moderate and restrained speech, refrained from extemporaneous tweets, and appeared to give Iran an off-ramp. Iraq’s parliament voted to kick out the US military from Iraq (yes, please do), but Trump has suggested they have said something different privately. Certainly the outnumbered Iraqi Sunnis and Kurds want the US to stay.

This week the metals sector map shows miners leading metals lower, with juniors and seniors relatively even, with gold doing best. Gold/euros did well, which suggests perhaps half of gold’s poor performance was a currency effect. But those miners were hit hard enough to drop below the 9 MA line, which could mark the start of a correction in PM.

Gold rose +8.81 [+0.57%] to 1567.72 on heavy volume. Gold’s high this week was a dramatic 1618 after news of the Iranian missile attack hit, but the new high didn’t last long. The northern doji candle was a possible bearish reversal (38%), and forecaster dropped, but remains in an uptrend. Gold is in an uptrend in the weekly and monthly timeframes.

COMEX GC open interest rose +3.5K contracts on Friday, and rose +1.3K contracts this week. Current open interest for GC: 73% of global annual production, up +0.12% this week. There was not much change in OI, contrary to what has been happening for several months.

Silver rose +0.05 [+0.28%] to 18.17 on moderate volume. Silver’s intraday high was 18.93; geopolitics giveth, and geopolitics taketh away. The northern doji candle was a possible bearish reversal (35%), forecaster dropped, but remains in an uptrend. Silver is in an uptrend in the weekly and monthly timeframes.

Silver commercial net fell -20K contracts, which was +19K new shorts and -972 fewer longs. Silver managed money net rose +22K contracts, which was -1.8K fewer shorts, and +20K new longs. This marks a new all time high for commercial shorts in silver, which suggests we might be near a high for silver as well. That said, it is a bit shocking to see such a massive commercial short overhang given how relatively poorly that silver has been performing. (Perhaps the huge overhang of shorts is the reason for silver’s poor performance?) 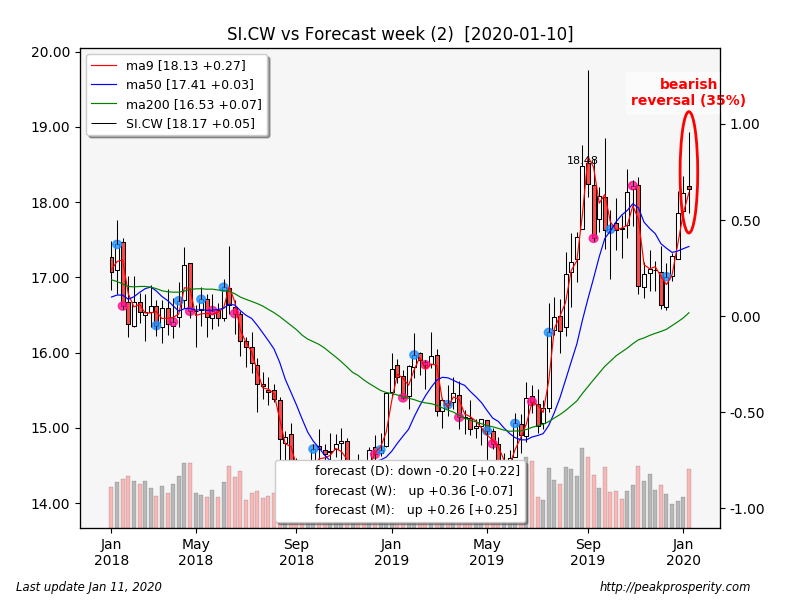 GDX plunged -2.47% on moderately light volume, and GDXJ dropped -2.41% on moderately light volume. XAU fell [-3.00%], the bearish engulfing candle was a likely bearish reversal (61%), forecaster dropped, but remains in an uptrend. XAU remains in an uptrend in the weekly and monthly timeframes. The miners were weak last week; they seem to be leading the PM sector lower at the moment. 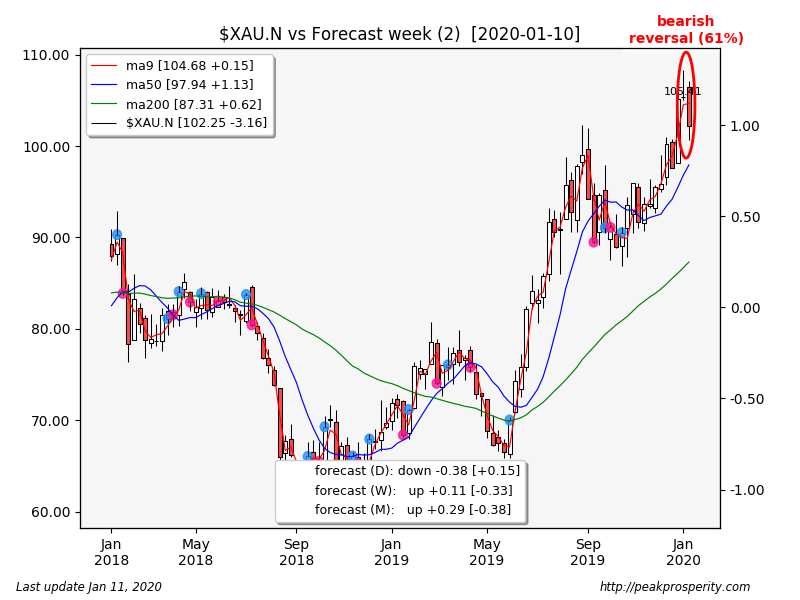 The buck climbed +0.53 [+0.55%] to 96.96 on moderately light volume. The long white candle was a possible bearish reversal (30%), forecaster climbed, but remains in a downtrend. The buck is in an uptrend in the daily and monthly timeframes. The buck appears to have run into resistance at the 50 MA. 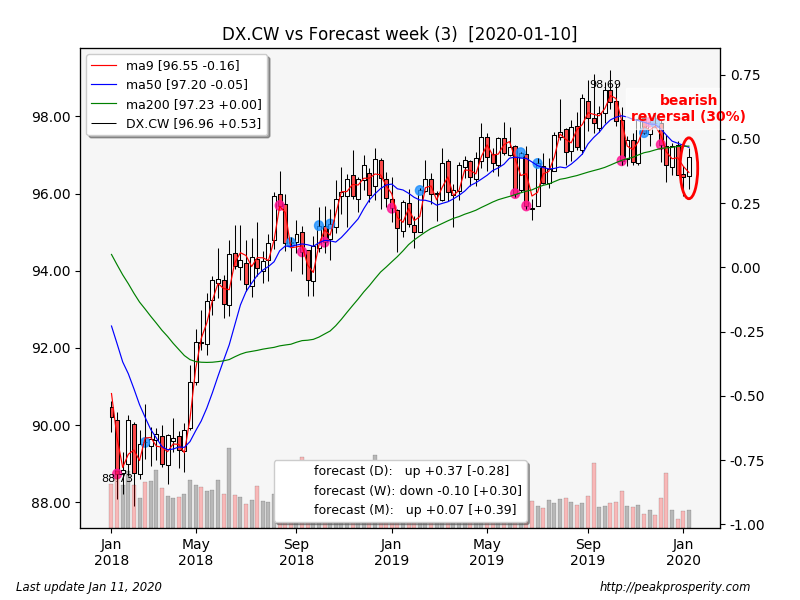 Crude plunged -3.74 [-5.96%] to 59.01 on moderately heavy volume. The bearish engulfing candle was a probable bearish reversal (55%) and forecaster fell, moving into a downtrend. Crude is in a downtrend in the daily and weekly timeframes. Judging from the large downside move this week, it appears as though the Iran situation was responsible for a good chunk of oil’s rally over the past four weeks – which has now been unwound. 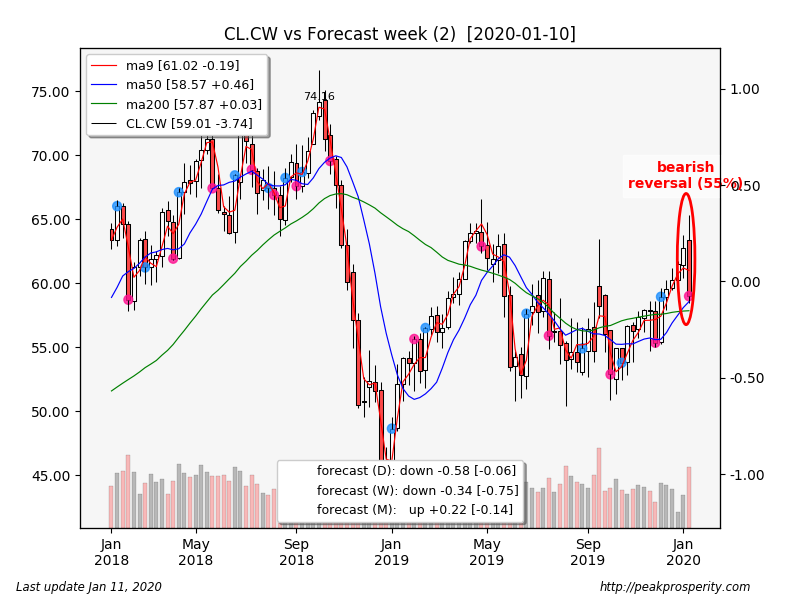 SPX climbed +30.50 [+0.94%] to 3265.35 on moderate volume. The opening white marubozu candle was a bullish continuation, and while forecaster dropped, it remains in an uptrend. SPX is in an uptrend in all three timeframes. SPX made yet another new all time high this week. 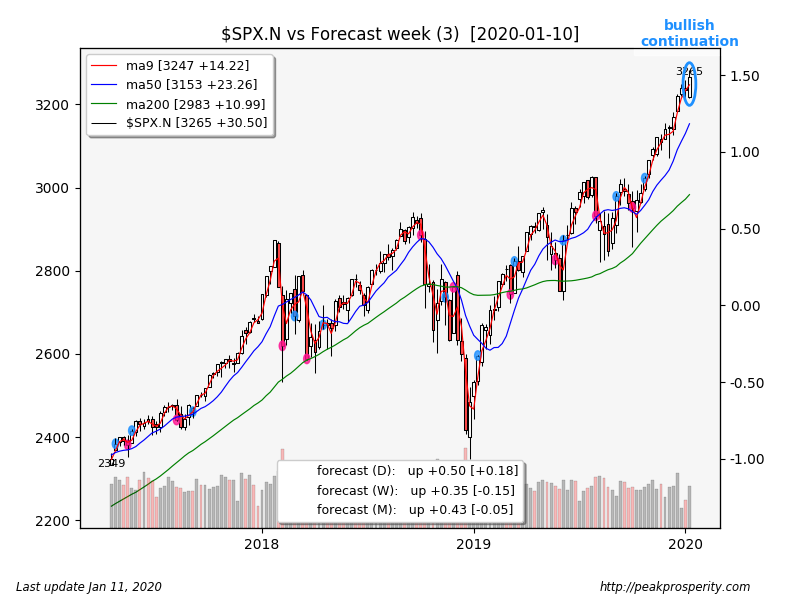 TLT dropped [-0.49%]. The long black candle was a bullish continuation, forecaster climbed, moving higher into its uptrend. TLT is in an uptrend in the daily and weekly timeframes. The 30-Year yield rose +2.0 bp to +2.28%.

TY dropped [-0.22%]. The long black candle was a bullish continuation, and in spite of the decline, forecaster moved into an uptrend. TY is in an uptrend in the daily and weekly timeframes. The 10-Year yield rose +2.0 bp to +1.82%. 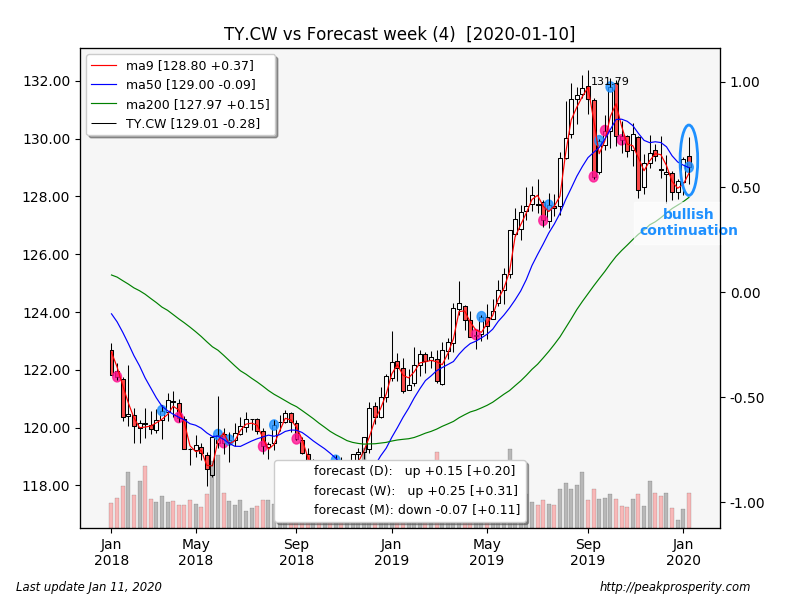 JNK dropped [+0.21%]. The short white candle was a bullish continuation, forecaster climbed, moving higher into its uptrend. JNK is in an uptrend in the daily and weekly timeframes. This week was a new 2 year high for JNK; my guess is, crappy debt has been an important beneficiary from the $400 billion in Not-QE from the Fed.

The GLD ETF tonnage on hand dropped -20.78 tons, with 875 tons remaining in inventory.

Headline number was reasonably strong. Manufacturing was weak, but one of the two important part-time work leading indicators fell, which is good news, while the other PTW series is still looking neutral.Recession Watch.

Iran-related activity drove prices first higher, then lower. Safe haven moves cannot be trusted to provide a lasting move for PM or crude – unless the crisis is a long one, which this one was not.

Not-QE showed a reversal this week – an actual reduction of the balance sheet. It wasn’t a huge move, but it is a sign that (perhaps, for now) the crisis may be passing. I’d still like to await confirmation next week, to see if we get another decline in the balance sheet. This week’s move wasn’t large enough to me to be conclusive.

Bonds look to be a bit tepid; even during the “OMG WWIII” moment, bonds didn’t seem to attract all that much interest. That’s probably not a good sign for where they go next.

The Nonfarm Payrolls report wasn’t outstanding, but it wasn’t bad either; while manufacturing is contracting, the PTW section was largely positive. No recession.

Commercial shorts are at all time highs.  This might be suggesting a near-term top might be in.  Caveat: if the repo crises comes back, I’m guessing gold continues moving higher. 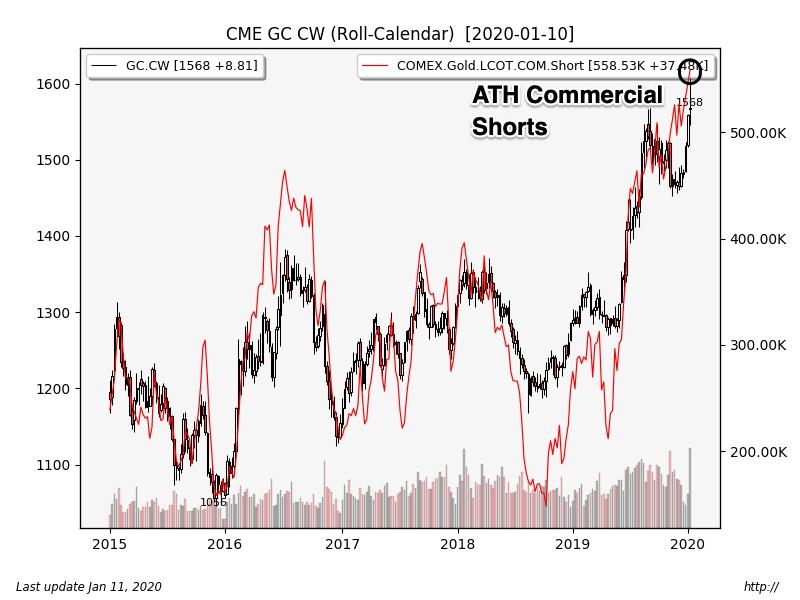 Big bar premiums on gold and silver were little changed, and ETF discounts shrank a bit. There is no shortage of physical PM at this time.

What next for the metals? The long term forecasters are still pointing higher, but the dailies have all reversed. My guess: we should probably watch the miners for clues.

In echoes of what happened in Hong Kong, the current President (who opposes closer ties with Beijing and the CCP) won re-election in a landslide victory.  Record turnout, and a record number of votes were cast for the incumbent – whose fate was uncertain prior to the events in Hong Kong this past summer due to a slowing economy.

Did the CCP’s heavy-handed series of threats (sailing their new aircraft carrier – twice – past Taiwan, among other things) act to help Tsai’s re-election?

And had the Communist Party not turned up the pressure on Taiwan, had its approach to the crisis in Hong Kong been subtler, the path to victory for a candidate it wanted so much to thwart may have been much less certain.

After the result was announced I asked Tsai Ing-wen whether she had the Chinese President Xi Jinping to thank for her victory.

Oh yeah.  It was an unintentional campaign contribution by the CCP, for (incumbent President) Tsai.  This is yet more indirect fallout from the CCP’s “subjugate Hong Kong” policy, and yet another black eye for Xi.