Friday’s moves were largely driven by the news that a US drone strike killed an important Iranian General in Baghdad along with an Iran-allied Iraqi militia leader.

The PM sector map shows gold leading silver, and the metals leading the miners. This is characteristic of a safe haven move. Copper is the only element of the map below its 9 MA.

This week, gold shot up +40.41 [+2.66%] to 1558.91 on extremely heavy volume. All of the gains came on Thursday and Friday. Gold ended the week at a new 6-year closing high; the last time gold closed at this price on a weekly chart was was back in 2013. That’s a big deal. The long white candle was a bullish continuation, and forecaster climbed, moving higher into its uptrend. Gold remains in an uptrend in all 3 timeframes.

[Note: In previous reports, I was using the wrong figure for gold’s annual production: 2500 tons/year; the actual figure is 3347 (2018), which I am now using. Apologies for the error.] 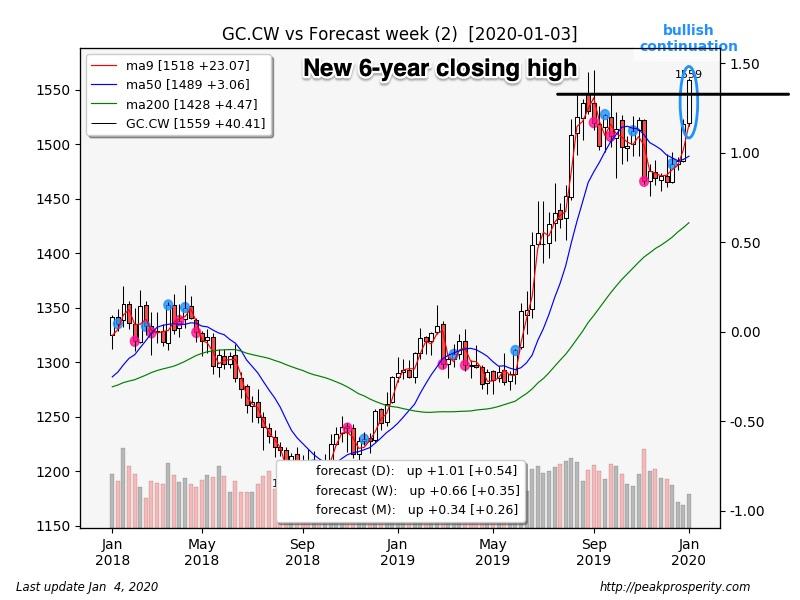 Silver climbed +0.26 [+1.46%] to 18.12 on very heavy volume. Unlike gold, silver actually had a failed rally on Friday – although Friday’s high wave candle was not bearish, daily forecaster was flat. The weekly opening white marubozu candle was a bullish continuation, and forecaster dropped, but remains in an uptrend. Silver remains in an uptrend on the weekly and monthly timeframes.

The gold/silver ratio climbed +1.01 to 86.03. That’s bearish – characteristic of a safe-haven PM move. Safe haven moves aren’t so reliable as the metals typically correct once the problem is over. 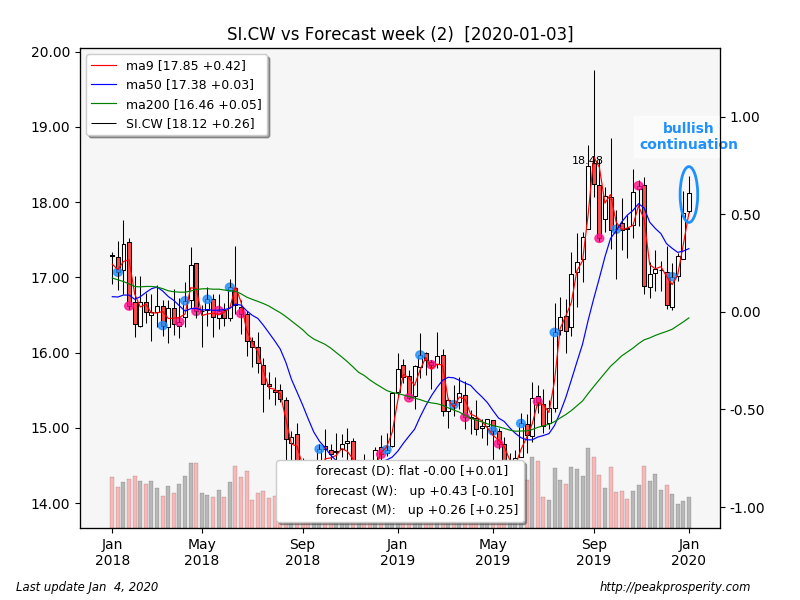 The miners seriously under-performed this week, moving lower on both Thursday and Friday. XAU moved up just [+0.27%] on the week, the northern doji candle was a bullish continuation, and forecaster dropped, but remains in an uptrend. Daily forecaster is now in a downtrend, but the miners remain in an uptrend in both weekly and monthly timeframes. 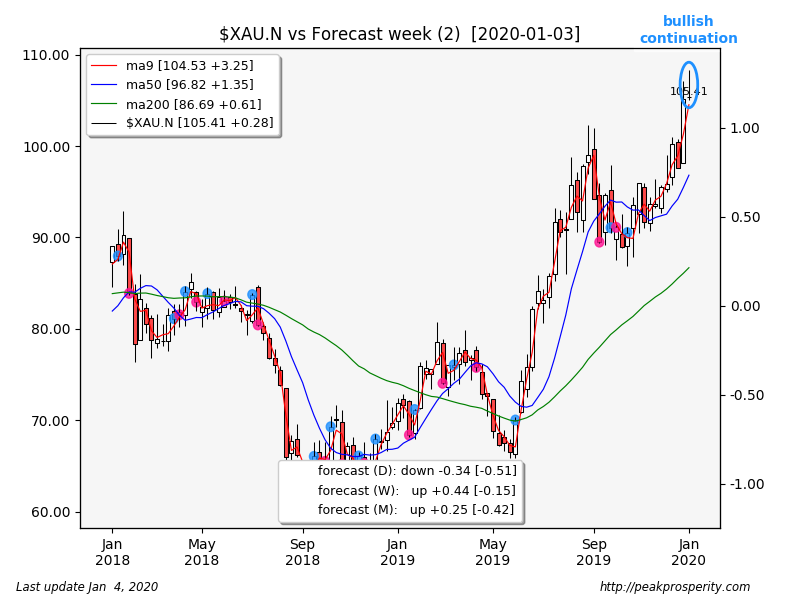 The buck fell -0.06 [-0.06%] to 96.43 on moderately light volume. The high wave candle was a bearish continuation and forecaster climbed, but remains in a downtrend. The buck is in a downtrend in both daily and weekly timeframes. 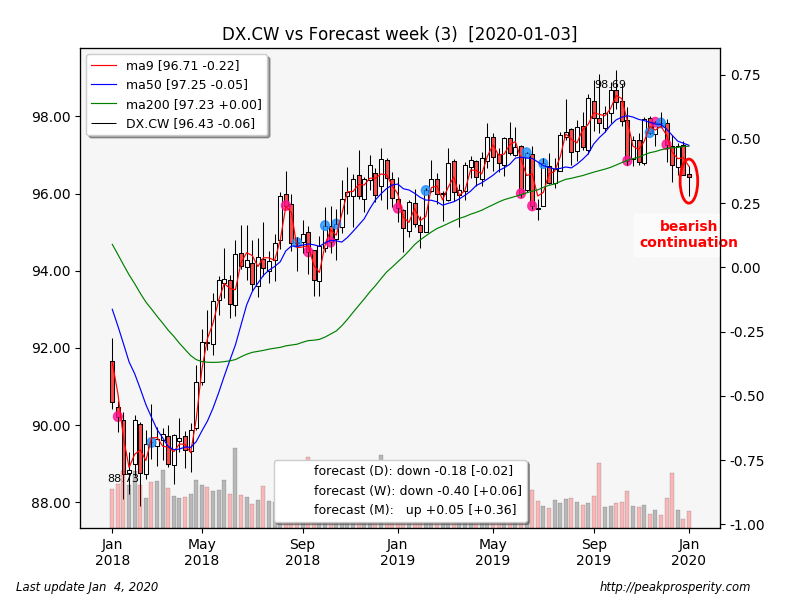 SPX dropped -5.17 [-0.16%] to 3234.85 on moderate volume. Equities chopped sideways this week; while the drone strike did cause some consternation (at one point, the minis were down overnight about 45 points), in truth equities looked fairly iffy all week long. The high wave candle was a bullish continuation, and while forecaster dropped, it remains in an uptrend. SPX remains in an uptrend in all 3 timeframes. 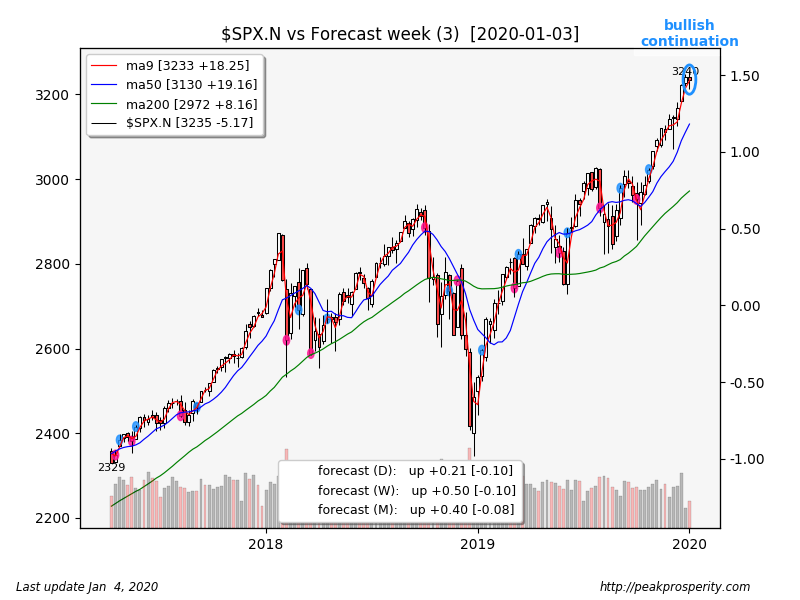 TLT rallied [+1.31%], the closing white marubozu candle was a reasonably strong bullish reversal (44%), and forecaster climbed, rising back into an uptrend. TLT ended the week in an uptrend in the daily timeframe. 30-Year Yield fell -6.0 bp to +2.26%.

TY climbed too [+0.59%], the long white candle was a bullish continuation, and forecaster climbed, but remains in a downtrend. TY remains in a downtrend in both weekly and monthly timeframes, but both trends look fairly weak at the moment; TY ended the week back above all 3 moving averages, and it does appear that bonds may have reversed back up again. Most of the gains this week occurred on Friday. 10-Year Yield fell -8.0 bp to +1.80%. 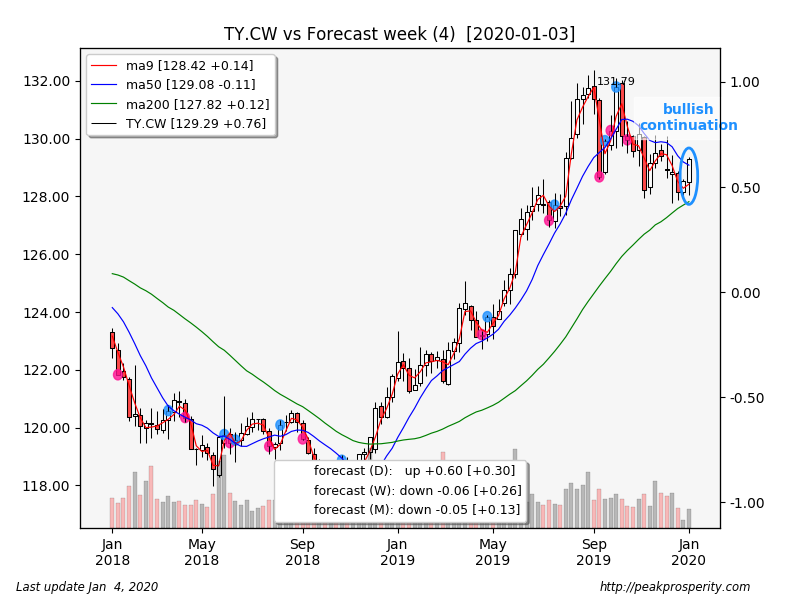 BAA.AAA differential was unchanged this week at +86 bp. I’m guessing the $405 billion in new money has numbed any concerns the market might have had about credit quality. At least for now anyways.

Crude rallied +1.23 [+2.00%] to 62.75 on extremely heavy volume. All of the gains this week came on Friday, following the news about the drone strike. The long white candle was a bullish continuation, and forecaster climbed, moving higher into its uptrend. Crude remains in an uptrend in all 3 timeframes. If its not one thing, its another with crude. There always seems to be a reason for it to rally.

This week’s EIA report [out on Friday because of the holidays] was roughly neutral: crude -11.5m, gasoline +3.2m, distillates +8.8m. 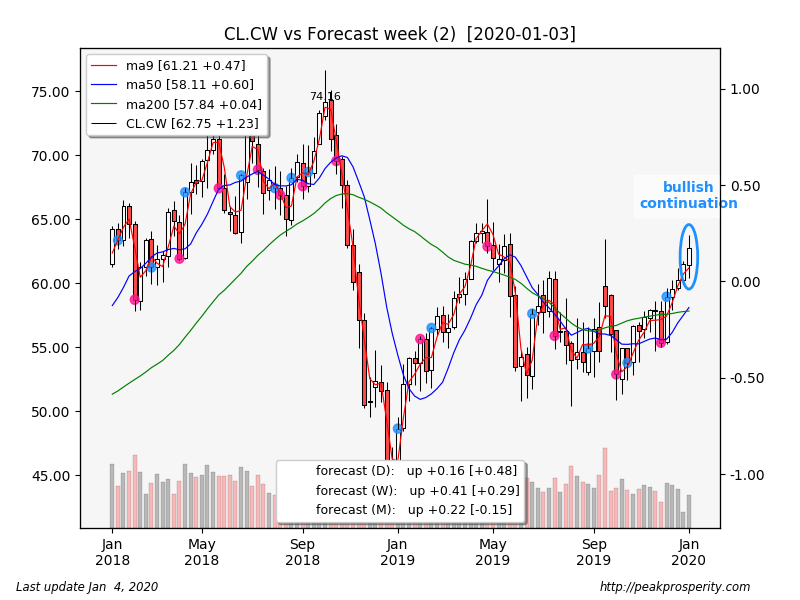 The GLD ETF tonnage on hand was unchanged at +0.00 tons, with 895 tons remaining in inventory.

This week ended up dominated by Friday’s drone strike; gold rallied hard, silver did much less well, and the miners actually dropped. Are the miners simply retracing after a very positive [+12%] December? Maybe that’s all this is.

Not-QE was mild this week; Wolf talks about the details (link below). His charts go into finer granularity on the various instruments the Fed is buying (and in some cases, selling). It appears as though this week the Fed actually sold its repo holdings, while letting other assets roll off the balance sheet.

This week’s bond rally mostly took place on Friday – when the 10-year rallies alongside gold, that’s a clue we have a safe haven move going on. When silver does poorly relative to gold, that’s another clue. And when equities sell off, well, that just caps it off.

This week’s sole economic report was recessionary; the Mfg ISM hasn’t looked good for a while, and now it is looking even worse. That lines up with the bearish-looking durable goods (new orders) from last week.

The gold OI continues to jump higher – it was yet another new all time high in OI this week. This, when gold jumped $40. If there was no huge increase in OI, how much more would gold have rallied? Gold’s uptrend remains quite strong. That’s what I use the weekly and monthly forecasters for; to keep me on the right side of the current longer term trend. And right now, they all point higher.

Big bar premiums on gold and silver were little changed, as were ETF discounts. There is no shortage of physical PM at this time.

Looks like we are still “all systems go” for gold – at the very least, model is uncertain about where gold goes next.  That’s pretty remarkable given the recent move, and how close we are to the previous high set back in September. 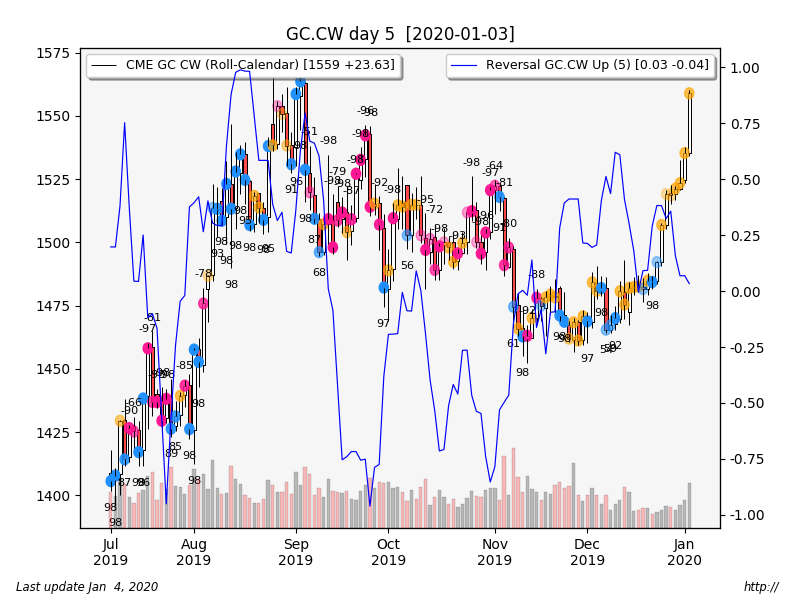 Silver continues to look unhappy – it is about as bearish as it gets.  I still need to cross-validate the silver model – in my copious free time. 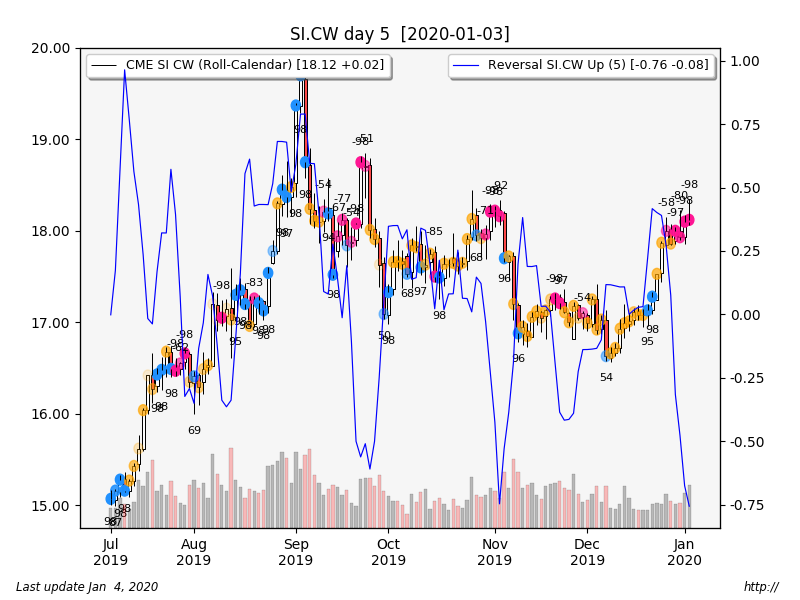 If I could pick your grey matter for a moment:

Do you think the miner market leads gold or vice-versa? Conventional wisdom is the miners play catch up to gold but I often see what appears to be the opposite, both on the upside and the downside.

Do you have any experience with options? I’m trying to educate myself on trading options, specifically long vol options. I’ve never traded options and I’m reluctant to start now, but if an opportunity arises where I can acquire some “cheap” insurance against the next 2008-type liquidity crises, I would feel better about holding my miners portfolio long-term.

I’m looking for a course on options trading. Do you know of any that you might recommend or another path to a good education on the topic?

I’ve never made money on options as longs – just on shorts.  And that’s definitely not a sure thing.  I have friends who make money on covered calls – that’s lowest risk.  After their position shoots up (kinda like XAU is now) and is really extended, they write calls against their long positions – worst case they lose the position plus the call price.  Best case, call expires OTM.  That’s a no-lose trade, but you take the risk of continuing to be long (or being taken out of your position prematurely).

If you want to trade options on the short side (which I think is the profitable trade) then watch the implied vol.  When it is at a high, then do your trade.

Long side options – I never had any luck.  It feels like a fool’s game.  Like the lottery.

“We all know the market is overbought.”  But – exactly when will it correct?  If you are off by one month – you’re toast.

Oops.  I didn’t answer your other question.  Miners do tend to lead PM.  Except when the equity market corrects.  Then a falling equity market seems to drag down gold miners too.  I saw that during 2008.

I think right now XAU is weak because it was bid up a trifle much in December and it is retracing a bit.  But that’s just a guess.

Thanks for the feedback.

I did a really poor job of explaining the option strategy I was thinking about. I said “long vol options” when I really meant long-term buy options on the VIX Volatility Index.

I found this video this morning that describes a continuous VIX hedging strategy that would appear to be what I am looking for. Theoretically, it provides some long-tail risk protection at a reasonable price (or insurance premium).

Have you or anyone that you know ever employed this strategy?

No I haven’t done that with VIX.  Best I can tell this guy was buying 40-strike calls with 120 days to expiration on the VX future, and letting them run to expiration.

Buying calls and letting them run to expiration is a sure money loss every month – right up until the big excitement hits.  I don’t have historical data on options, so I can’t tell how big the premium gets during those times, so I can’t calculate the upside.

If he buys 0.25% per month, that’s a guaranteed 3% loss per year.  That’s not horrible for “tail risk” insurance, but I don’t know what sort of % coverage that ends up being.

I’d be tempted to game it a bit, and buy my calls when VIX drops to 12-13, and then sell out in chunks if things get profitable, but that’s probably the wrong thing to do. 🙂 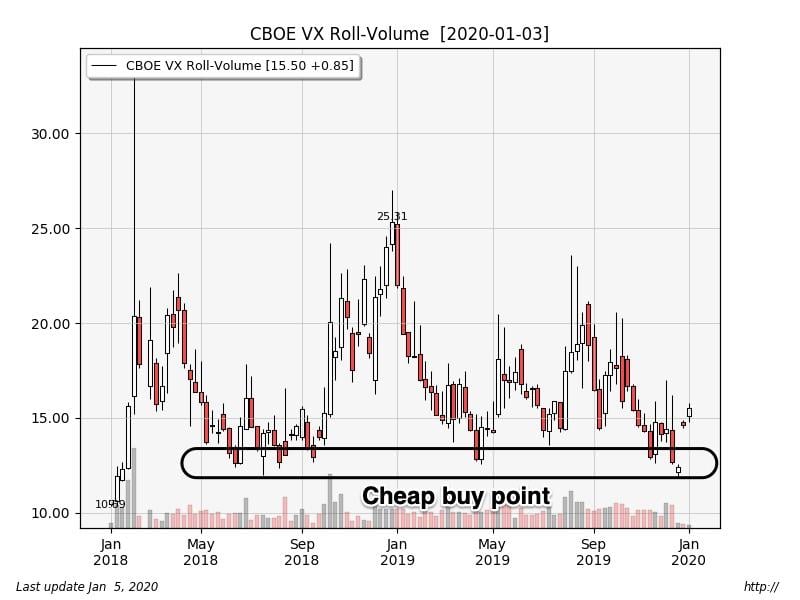 To say whether or not this is a good idea – I’d have to do the backtesting myself and see how things played out.