The monthly sector map shows silver in the lead, up an incredible 33%. Silver led gold, and the miners were in the middle; they continue to lag, although the silver mining shares almost were able to keep pace with the metal itself. The other metals did well, but weren’t nearly as strong, and Gold/euros brought up the rear, which hints that a dollar plunge probably provided a significant boost to gold/USD.

In July, gold shot up +184.03 [+10.17%] to 1994.44 on moderate volume. The closing white marubozu candle was a bullish continuation, forecaster climbed, moving higher into its uptrend. Gold is in an uptrend in all three timeframes.

Gold/euros climbed +80.58 [+5.00%] to 1691.70 on moderate volume. The closing white marubozu candle was a bullish continuation, forecaster dropped, but remains in an uptrend. Gold/euros is in an uptrend in all three timeframes.

Gold had a great month, breaking out to a new all time high, and holding that high through to the close. In fact, Friday (the last day of the month) was also an all time closing high too. This is quite bullish.

There was also a large drop in OI on Friday as well – the First Notice Day for GCQ20 – and this was likely the key to the puzzle for gold’s big rally. It appeared to me that the banksters bailed out of their short positions, right here at the top, rather than risk having to cough up physical gold. I mean, that’s a guess. But have I ever seen a massive drop (26k contracts!) while the market makes new highs? I have not. Mostly, the commercials go short at new highs. 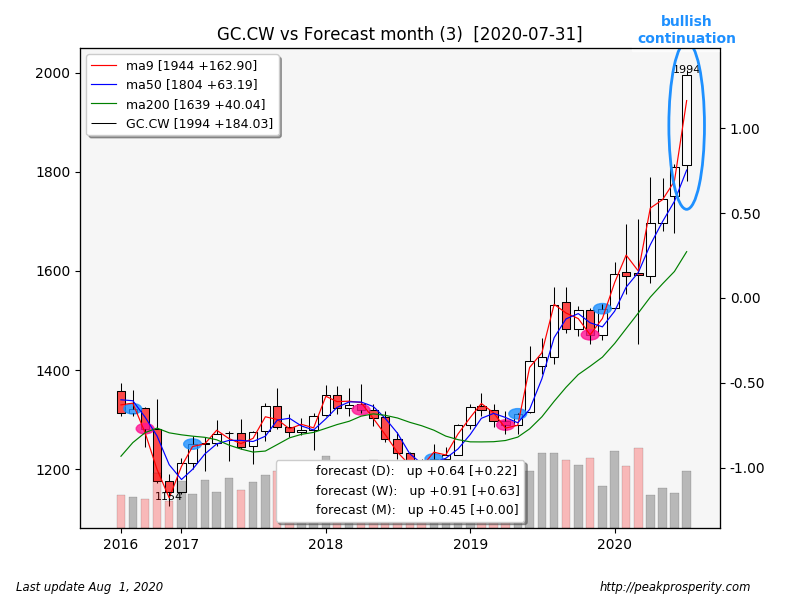 Silver screamed higher, up +6.18 [+33.26%] to 24.76 on heavy volume. The long white candle was a bullish continuation, forecaster climbed, moving higher into its uptrend. Silver is in an uptrend in all three timeframes.

There was a huge difference in open interest change for silver compared to gold, but the OI levels for silver still remain well below where they were at the start of the year. The gold/silver ratio is now unwinding at a rapid pace; how much farther this will go in this cycle is an open question, but the uptrends remain in place and are reasonably strong. Daily RSI7 for silver has dropped to 74, which is just slightly overbought. 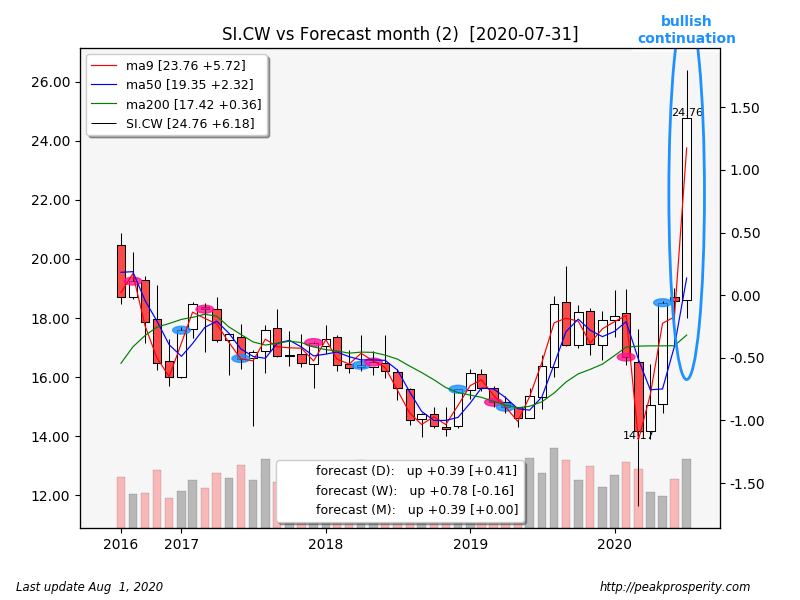 GDX gained +17.07% on moderate volume, and GDXJ shot up +21.90% on moderate volume. XAU rallied +19.64%, the long white candle was a bullish continuation, forecaster climbed, moving higher into its uptrend. XAU is in an uptrend in the weekly and monthly timeframes.

While the mining shares outperformed gold, they did not outperform silver – not even the silver mining shares did so. Normally, miners should rise faster than metal, since the miners – representing years of supply of metal in the ground – are a leveraged play on the metal itself. Mostly this suggests that the market believes metals prices might be a little ahead of themselves at this point. 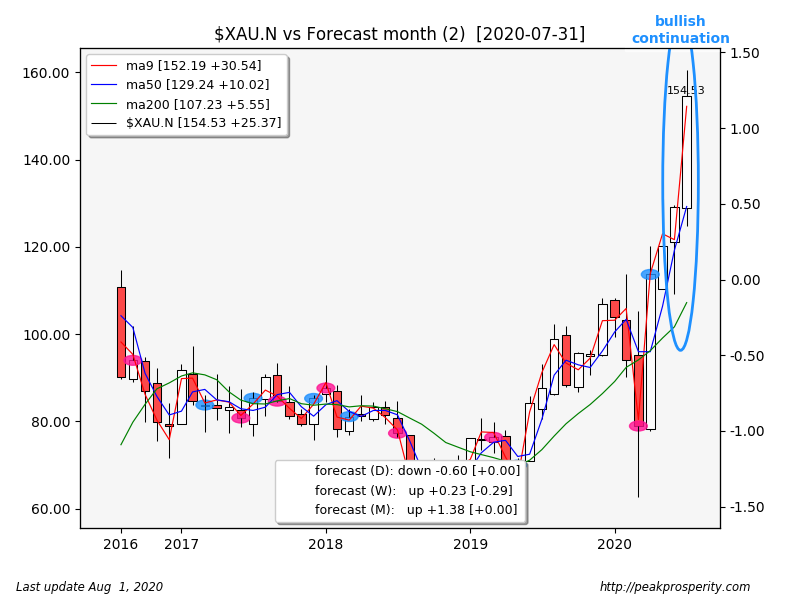 Copper rallied +0.14 [+5.15%] to 2.86 on moderately heavy volume. The long white candle was a bullish continuation, forecaster climbed, moving higher into its uptrend. Copper is in a downtrend in both the daily and weekly timeframes.

While copper’s monthly chart looks strong, copper ended the week in downtrends for both daily and weekly timeframes; the daily actually looks pretty unhappy, and copper is well below the 9 MA – although prices have yet to meaningfully correct. Friday marked the lowest close for copper in more than two weeks. 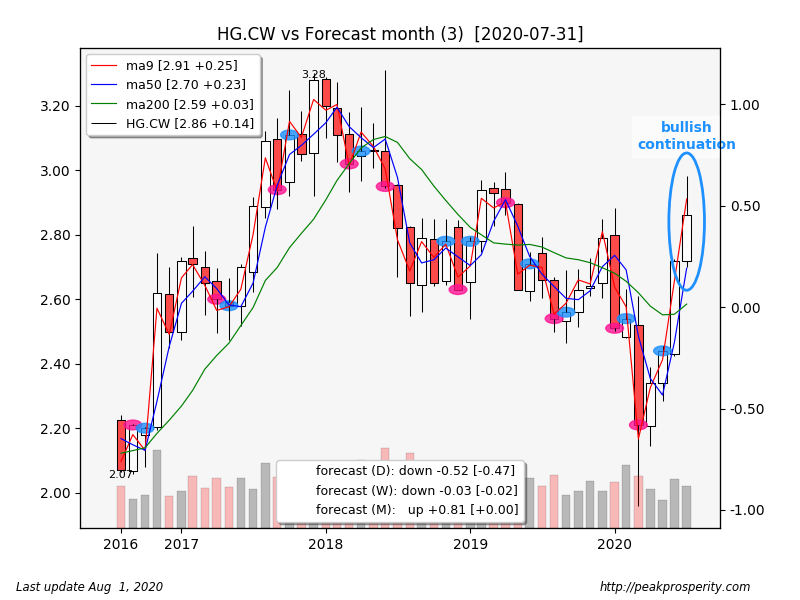 The buck plunged -4.02 [-4.13%] to 93.33 on very heavy volume. The opening black marubozu candle was a low-percentage bullish reversal (17%), forecaster dropped, moving deeper into its downtrend. The buck is in a downtrend in all three timeframes.

It was a bad month for the buck, and GBP and EUR were major beneficiaries; the last time EUR/USD was at 1.18 was back in early 2018. However, on Friday the buck actually rallied, printing a bullish engulfing (46%), but it was not enough to pull daily forecaster back into an uptrend – and the buck remains well below the 9 MA. The dollar downtrend remains strong. 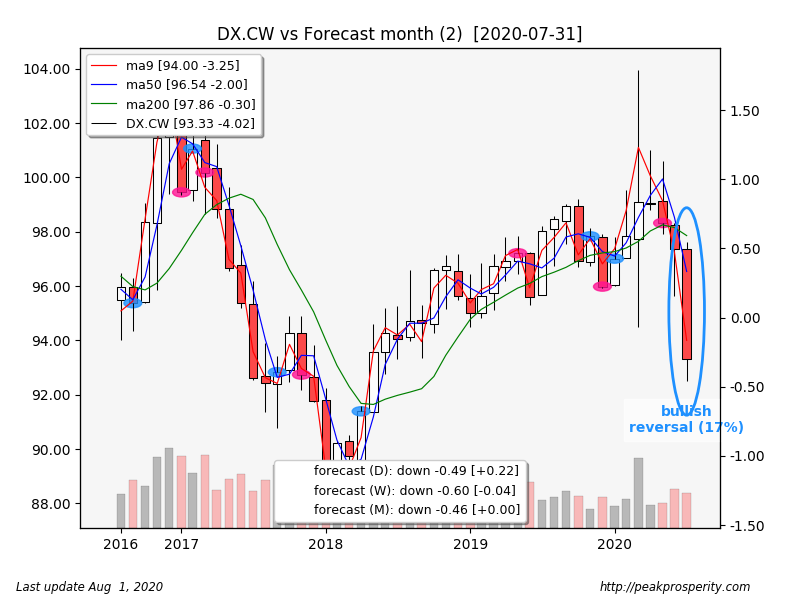 Crude rose +0.70 [+1.76%] to 40.54 on moderate volume. The northern doji candle was a bullish continuation, but forecaster fell, dropping into a downtrend. Crude is in a downtrend in all three timeframes.

Crude looked weak all month – basically crude just side-tracked – but it may have tipped into a downtrend on the last two days of this past week. A reversal in crude could lead to a sell-off in equities also. Trends in crude are relatively weak. 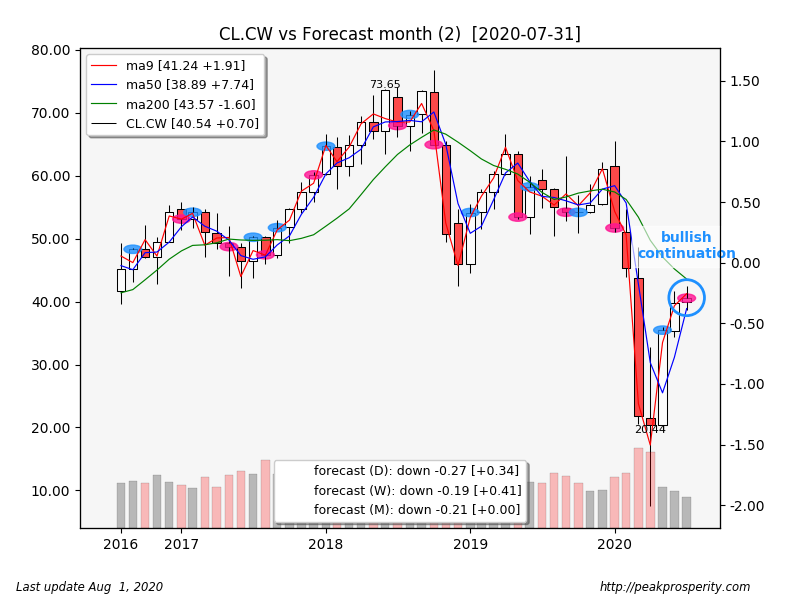 SPX shot up +170.83 [+5.51%] to 3271.12 on moderately heavy volume. The short white candle was a bullish continuation, forecaster climbed, moving higher into its uptrend. SPX is in an uptrend in all three timeframes. 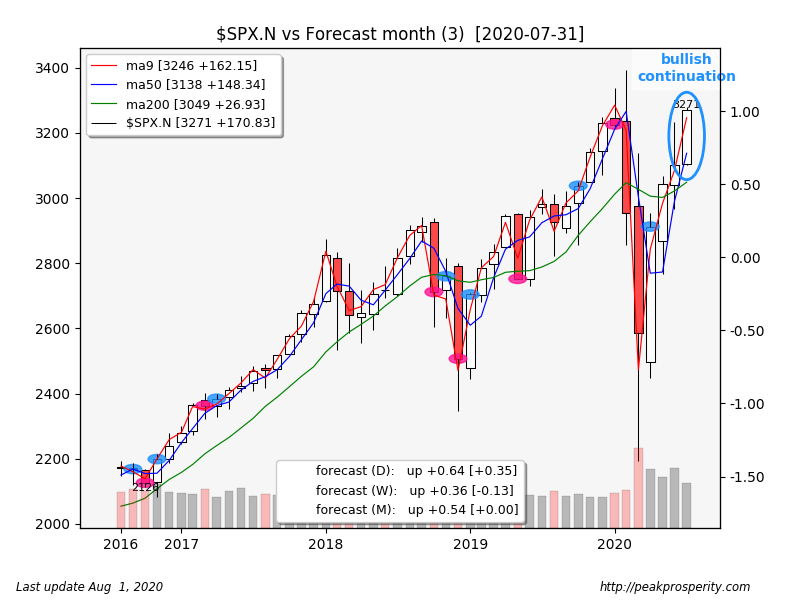 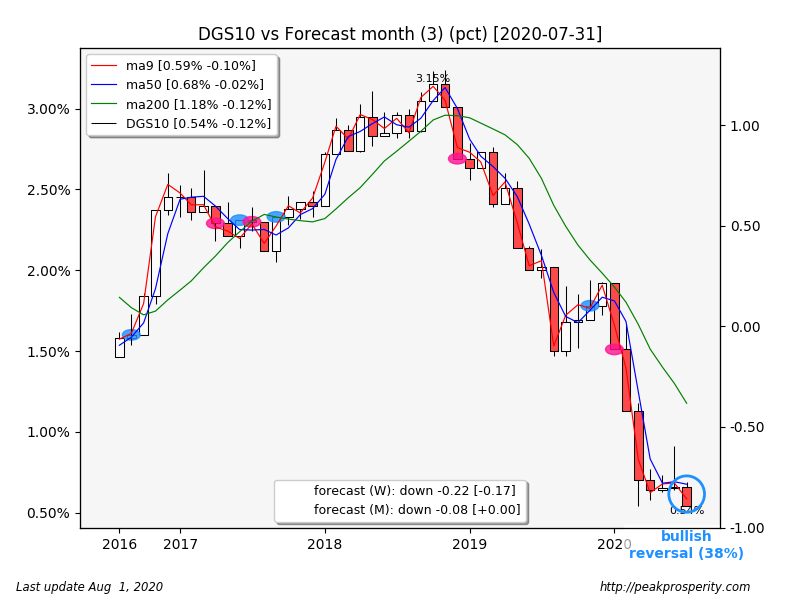 JNK screamed higher, up +4.88%. The long white candle was a bullish continuation; JNK is in an uptrend in the daily and weekly timeframes. No monthly forecaster for crappy debt, the ETF is too new for it to resolve. Risk on signal from crappy debt.

The GLD ETF tonnage on hand climbed +63.05 tons, with 1242 tons remaining in inventory.

Physical ETFs have moved into stronger discount, especially PSLV, while physical bars look scarce; the kilo bars have a fairly high premium, as do the silver bars too.

Personal Income: headline -1.12% m/m, Consumer Spending: +5.33% m/m. Personal income is still 5% above what it was pre-pandemic (thanks to those checks), while consumer spending has recovered perhaps 70%: people are saving money.

It was a “silver” month this month – the 4th best month for silver since the series started back in 1963, and the best month in 40 years. If you are long silver, that’s substantially better than a poke in the eye with a sharp stick. Did anyone remember me saying that I was putting all my “cash” into PSLV? I don’t normally do that sort of thing, but I got this one right for sure. So far anyways.

Silver was also a reversion to the mean trade; the plunge in the gold/silver ratio (16 points – to 80) brought the ratio back to still-elevated levels; the previous two PM highs saw the ratio at 1980:19 and 2011:31, which is far below where we are now. At 80, we are in no danger of marking a long-term top.

In PM rallies, silver leads PM higher. At long last, silver is leading now. It feels as though a beach ball, long held below the surface of the water, was finally released.

Gold and the miners did well also – gold broke out to a new all time high, and the miners are back to levels last seen in January 2013. The big drop in OI on Friday was a positive sign too; most likely due to the banksters bailing out immediately before being asked to cough up the physical metal by people standing for delivery.

In fact, this behavior – standing for delivery – by people who want physical gold, with no premium, and no default risk, is a new thing. And it is very bullish for gold. It will either lead to higher prices (eventually), or the long-awaited-by-goldbugs COMEX Default event, where COMEX itself runs out of gold. Only one issue: I think we have another 3 months (or is it six?) to wait for the next delivery month for gold.

The 10-year bond yield has fallen to all-time lows (thanks to 96 billion in purchases from Mr Powell), and both equities and crappy debt had a good month. Everything goes up with enough money printing.

Copper rallied too, but ended the month looking weak; crude chopped sideways, and also ended on a weak note.

Free money: there is a new tranche of free money being discussed in the Senate; everyone wants to give Americans more free money, but the primary issue is whether or not to shovel a trillion (or more) additional dollars at semi-bankrupt states, most of which are run by Team Blue. How much will the donor class get? That I don’t know.

Cases: appear to have peaked in the US. Possibly related: it is also possible that the buck is bottoming out, although that is much less certain.

Defaults: not happening yet. Everyone is still extending & pretending. How this plays out will drive a lot of things. Japan and 30 years of slow deflation? Or 1931 – a rapid explosion of massive deflation? If I were in charge, I’d do the “Steve Keen Debt Jubilee”, where every citizen would receive $50k in cash that would go first to pay down their debts, and any remaining cash would be handed to them. The Jubilee would be very hard on the banksters (all that interest income would vanish – especially all those payday loans and 30% credit cards), but it would deflate the debt bubble at a stroke. No foreclosures. No repossessions. And no deflationary depression.

Probably won’t happen. Not enough wealth transfer would occur to please the gang in charge.

Economic reports suggest we’ve bounced back – maybe halfway – after dumping maybe 2.8 trillion (12.7% of GDP) in newly printed money into the economy. More dollars + fewer goods & services (a lot fewer people are working) = inflation, but only if people spend all that new money. They are starting to do so.

Is Europe doing this? Yes, but the ECB total assets have risen just 500B Euros. They are printing, but only a fraction (4.1% of GDP) of what the US is doing. And that German court ruling is due to take effect basically next week. Perhaps this partially accounts for the plunge in the buck.

When the cases in the US start to materially decline, and if the civil unrest subsides, we will start to get more information as to the factors are that are driving both gold and the buck.

Good Monday morning to you DF, and thank you for another excellent report!

Looks like something has changed for natural gas. I have a couple of call options on UNG to offset inflation in my electricity bill and they are moving up significantly (35+%) today. The last few months they floundered around, only rising on days when the market was down.

Was there some news regarding natural gas?

DF, I have another one of my famous dumb questions for you: Are we overlooking the action in the bond market?

TLT is signaling strong deflation ahead while the dominant market narrative is all about inflation. Sure, it could just be the FED buying treasuries creating a false signal but what if it is not so simple?

What is that saying?

“It’s not what you don’t know that hurts you but what you think you know for sure that just ain’t so.”

Thanks for your time and brain cells.