The PM sector map improved this week; every item moved higher. Palladium did best, while gold trailed, and silver wasn’t much better. Miners did all right, with silver miners in the lead. Many items have regained their 200 MA lines, which is bullish.   There is a lot more green than red.

Gold rose +2.40 [+0.18%], and mostly that was all about Thursday; gold either fell or chopped sideways on all the other days of the week. While gold seems to have support at the 200 MA, that’s about as much enthusiasm as I can muster when looking at gold’s chart. Daily forecaster remains in a downtrend, as does the weekly and monthly.  If gold can close above that 50 MA, that will look a whole lot better.

The June rate-increase chances jumped back up to 100%. 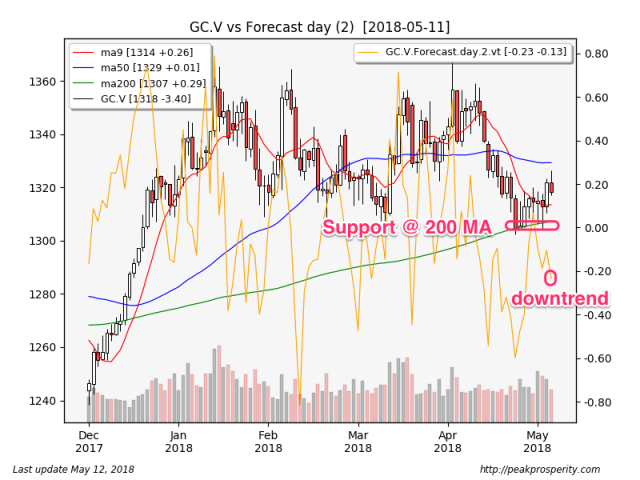 Silver rose +0.14 [+0.88%], but like gold, all the gains came on Thursday. The rest of the week wasn’t all that great. Silver did finally managed to break above its 50 MA, which is good news, but forecaster ended the week at -0.04, which suggests that momentum isn’t very strong. The chart shows that a number of rallies stopped at the 200 MA – this one might well be over as well.  Conversely, a close above the 200 would be a positive sign.  Silver remains in a downtrend in weekly and monthly timeframes. 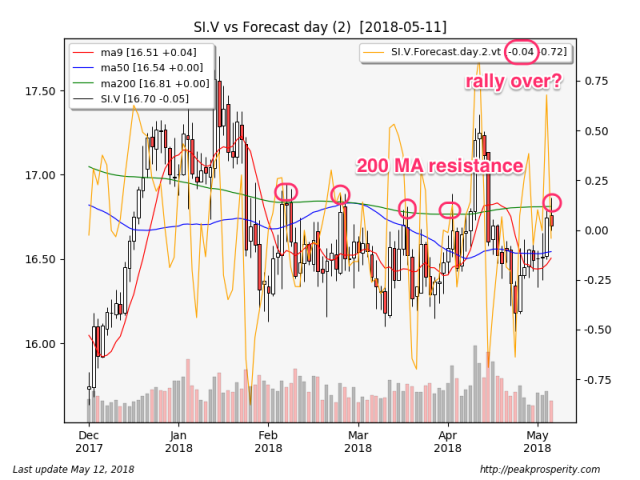 Most of the gains in the miners came on Thursday also; Friday looked a bit bearish, with dark cloud cover candle prints – that sounds ominous, but it was just a 30% chance of marking a top. XAU forecaster ended the week at +0.10, which is a mild uptrend. XAU remains in a downtrend in the weekly timeframe, but in an uptrend on the monthly.

The GDX:$GOLD ratio rose +0.83%, while the GDXJ:GDX ratio was unchanged. That’s slightly bullish. 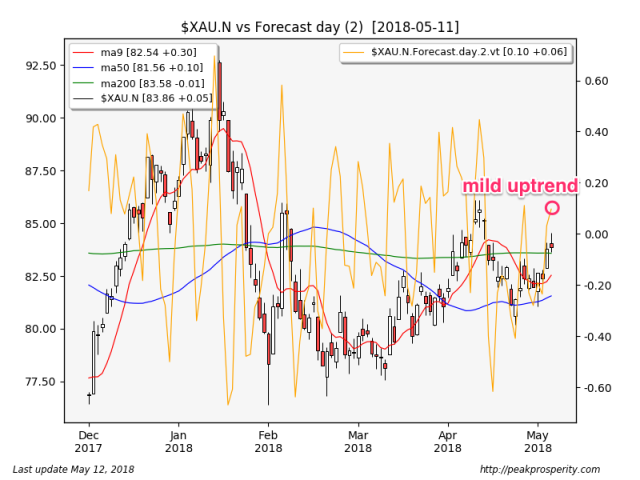 The buck was mostly unchanged, down -0.03 [-0.03%] to 92.17. The buck made a new high to 93.03 on Wednesday, but ended up reversing, printing a bearish-looking swing high, with the forecaster issuing a sell signal on Thursday (which, not surprisingly, was a big up-day for PM), ending the week at -0.24. Still, the buck remains in an uptrend in both the weekly and monthly timeframes. Right now it just looks as though the buck is taking a break. The interest rate differential between the US and Europe/Japan is probably the driving factor behind the dollar’s rally, and as long as that remains in place, the buck should probably continue moving higher. 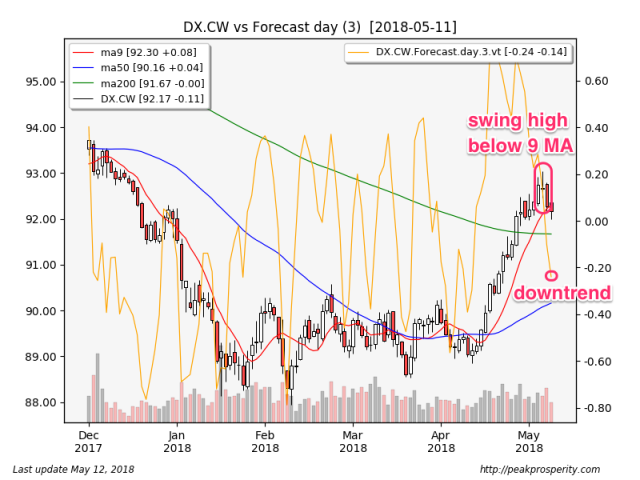 SPX rose +64.30 [+2.41%] to 2727.72, with all the gains happening in the latter part of the week. SPX broke above its downtrend line, which is bullish. Forecaster issued a buy signal on Wednesday, and SPX is in an uptrend in both weekly and monthly timeframes. Is it earnings? Money flows into the buck? I don’t know, but the SPX downtrend appears to be over. The DJIA appears to confirm. Sector map shows defense leading, along with energy, financials, industrials, and tech also showing strong gains. Utilities and staples brought up the rear. This is a bullish sector map – with a “defense” cherry added on top.

Gold moved higher in most currencies; it rose in XDR by +2.38. 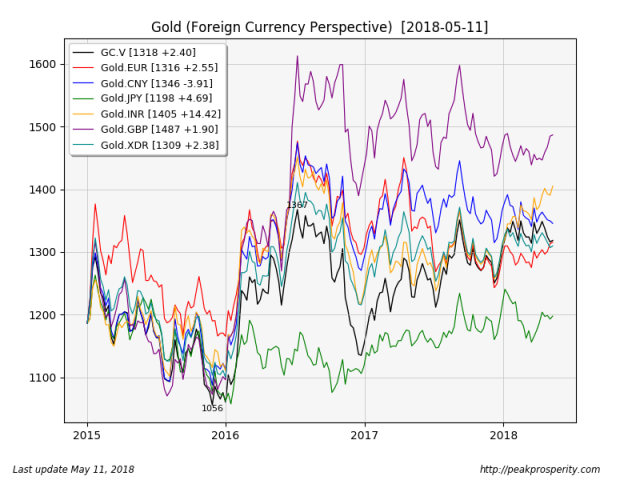 Bonds were mixed on the week; TLT rose +0.20%, managing to move slowly higher – quite a feat given how well equities did. TY wasn’t as strong, falling -0.24%. TY forecaster did improve slightly, but closed the week at -0.54, which is still a strong downtrend. TY remains in a downtrend in all 3 timeframes. All my indicators say that the momentum for 10-year rates remains to the upside. The 10-year closed the week at 2.97%.

JNK rose +0.28%, a decent performance given what happened to the 10-year this week. JNK often moves along with equities – junk debt is a risk asset. That said, the move higher in JNK was a bit tepid, considering how well equities did this week. BAA rates (lower-grade corporate debt) were unchanged, but the BAA forecasters remain in uptrends.

BAA-AAA ratio, which is a type of bond fear gauge, is quiet right now. It is in a very mild uptrend. If both BAA and AAA rates rise at the same pace, that’s just about interest rates moving higher, and that’s more or less what we see happening right now. When BAA rates rise substantially faster than AAA rates, that indicates a rising fear of corporate defaults – a flight to safety within the bond market itself.

Crude moved up +0.72 [+1.03%] to 70.49, making a new high this week largely because Trump pulled the plug on the Iran nuclear deal. Friday saw a swing high/bearish engulfing, which had a 49% chance of marking the top. Also, crude forecaster issued a sell signal. While crude remains in an uptrend on the weekly, the monthly forecaster right now is right on the edge of issuing a sell signal also. It might be time for crude to take a rest. EIA report looked bullish: crude -2.2m, gasoline -2.2m, distillates -3.8m, but if Friday is a clue, crude probably retraces – this might just be the “good news” from the Iran agreement pullout is being sold. 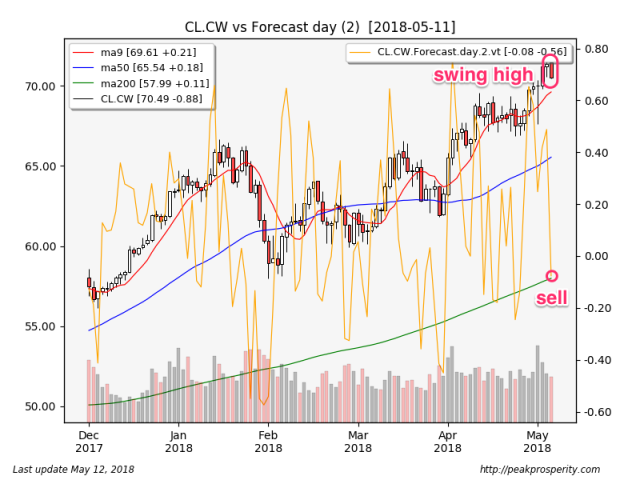 In silver, the commercial net fell by -5.1k contracts; that’s 4.2k new shorts, and 884 fewer longs. Managed money net rose by +4.4k contracts, that was 4.6k new longs, but also 221 covered shorts. This was a relatively small change for silver. Silver remains bullish for the most part, at least from the COT perspective.

This week the buck reversed, and that provided a momentary burst of energy for PM. Trump bailed out of the Iran nuclear deal which helped crude, equities rallied strongly putting SPX back into uptrend, and bonds remain relatively weak, bumping around near the lows. The 10-year is hovering just below 3%. Polls show that support for the Mueller investigation is slowly ebbing. This should help the buck longer term.

The gold COT is starting to look more bullish, with long positions for both commercials and managed money at 2 year extremes. Silver remains relatively bullish, but they are no longer at extreme levels.

Right now, money appears to be flowing into the equity market, and the sector map is looking fairly bullish. Rates haven’t yet broken conclusively above 3% just yet – in spite of the steady new supply from both the Fed and the Federal deficit. Oil continues to recover; with oil in the 70s, even shale drillers are – probably – making money.