The weekly metals sector map is bearish once again this week; silver led gold down, and the miners led the metals down also, with silver miners doing worst of all. There is a faint bit of positive news, however; gold/Euros actually rallied, and moved back above its 9 MA. This tells us there is a bit of buying across the pond. Meanwhile, those miners are down almost 30% over the last 52 weeks; silver is off 22%, while gold is down 11%.

One interesting behavior on Friday; while Trump indicated there could be another $267 billion in tariffs in the offing, the metals managed to avoid collapse. While copper and friends did decline, it didn’t lead to the wholesale collapse that one might expect from such a threat.

Gold fell -4.92 [-0.41%] this week; it was a fairly narrow trading range, with the weekly candle a short black/spinning top coming in as neutral. Daily forecaster did issue a buy signal on Thursday, but the weekly forecaster dropped -0.13 to -0.19, which suggests the downtrend remains in place, and gold remains below all 3 MA lines. Gold remains in a downtrend in both weekly and monthly timeframes.

The September rate-increase chances rose to 100%.

COT report shows the commercial net position rose +15k, placing the commercials in a net long position in gold for the first time since 2001, mostly due to short-covering (-11.6k) but also from long-buying (+3.2k). Managed money net fell -7k, most of which was long-selling (-4.3k) but also new shorts (+2.6k). Managed money net is not quite at record lows, but it is close. 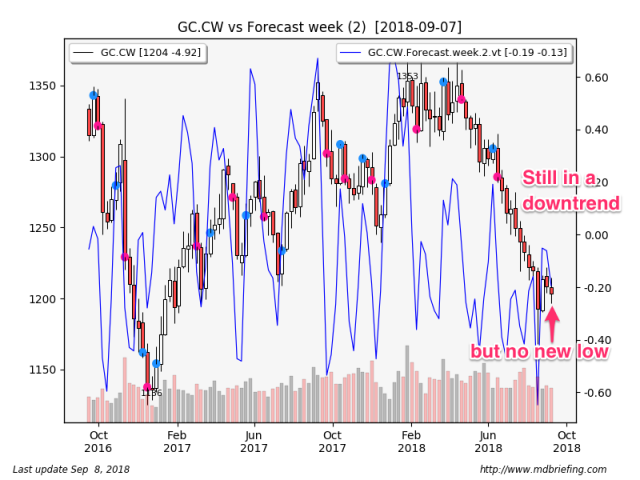 Silver fell -0.36 [-2.47%], with all of the damage happening on Tuesday, when silver made a dramatic new low to 14.03. Silver chopped sideways for the remainder of the week. While the weekly long black candle looks bearish, daily forecaster has jumped up very close to a buy signal, ending the week at just -0.03. Weekly forecaster also jumped higher, up +0.24 to -0.09, and monthly forecaster is also looking more positive, +0.30 to -0.10. Although the charts look bearish, what with the new low and all, forecasters are hinting at – maybe – a reversal in the next week or two.

So what happened on the big move down on Tuesday? My read: commercials covered like crazy, ringing the cash register down at 14.03, while managed money loaded up short, and liquidated long.  When I saw the COT report on Friday, I added to my long silver positions after market close. FWIW. 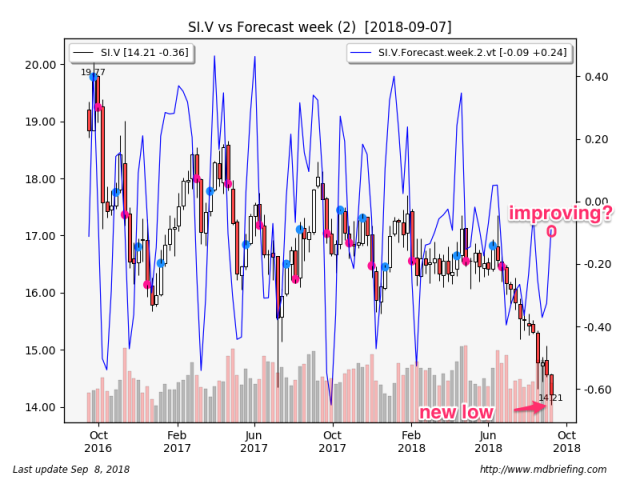 Miners were hit hard this week, with most of the damage happening on Tuesday. XAU made a new low on Friday, but managed to come back to neutral by end of day. The long white candle on Friday was bullish (45% reversal). Daily forecaster jumped +0.21 to -0.51, which is still a strong downtrend. XAU is in a downtrend in all 3 timeframes.

In spite of all that, GDXJ forecaster issued a buy signal on Friday, and there were a group of bullish candles for GDX and GDXJ which ranged from between 35-46% bullish. We are also seeing some strong bullish divergences on the RSI for XAU, GDX, and especially GDXJ. This tells us that downside momentum has really slowed to a crawl. This behavior happens – sometimes – before reversals. 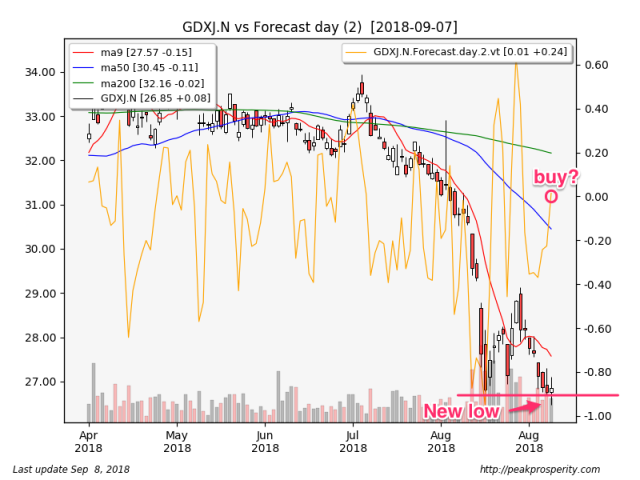 The buck rose +0.23 [+0.24%], trying hard to rally but only partially succeeding. The buck did manage to end the week above all 3 moving averages, and remains in an uptrend in both the daily and monthly timeframes, but on the weekly, it sure appears as though the upside momentum has stopped and the buck is heading lower.

USD/TRY fell -0.17 to 6.40, helped by hints of an impending rate increase from the Turkish central bank, as well as comments by Merkel that Germany had a “strategic interest in sound economic development in Turkey.” Merkel isn’t kidding. If Germany has a problem with Syrian migration today, just imagine what kind of migration occurs if Turkey turns into a failed state. Merkel: “please don’t blow up, Turkey. Europe can’t afford it.” 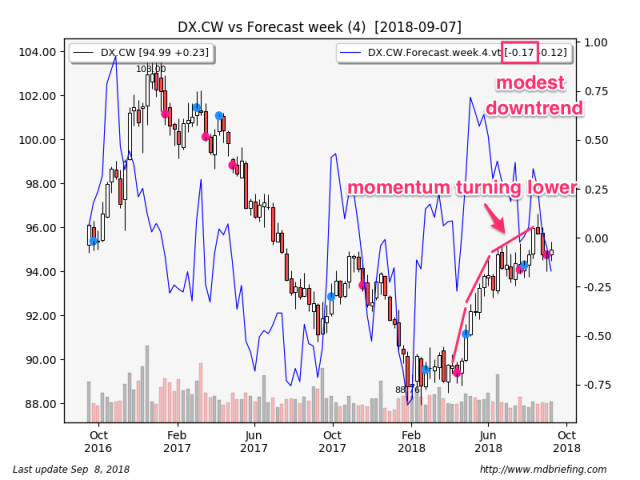 SPX fell -29.84 [-1.03%] to 2871.68. SPX fell every day this week, printing a swing high, with the forecaster issuing a sell signal on Tuesday. SPX ended the week below its 9 MA. Still, the move down was slow and seemingly quite restrained, and SPX did a lot better than other markets around the world.

The sector map shows tech and telecom leading down, while utilities and staples did best. Its generally bearish when these two sectors do well. Tech falling most is never a good sign either.

Globally, the US was the the strongest equity market in the world this week, with emerging Asia having the largest problem.

Gold fell in most currencies – except the Euro, and the INR. 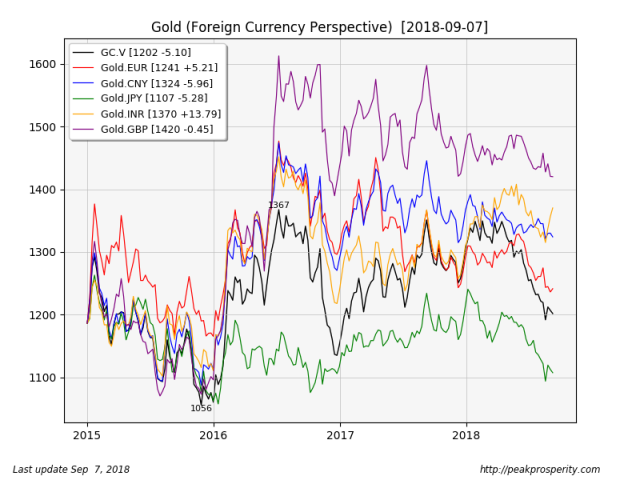 TLT fell hard, losing -1.54% on the week, making a new low on Friday. TY also did quite poorly, dropping -0.50%, printing a variety of bearish-looking candles on Friday. TY is in a downtrend in both daily and weekly timeframes. The 10-year yield rose +8.9 bp to 2.94%. That’s a pretty big move.

JNK fell -0.67% on the week, with most of the damage happening on Tuesday. I’m not sure what happened on Tuesday – it was a pretty large drop. JNK’s cousin, HYB, cratered on Friday.

What was the big Friday move about in HYB? Well, HYB owns TSLA bonds, which have been doing poorly after Elon Musk appeared on a comedy show Thursday, sipping whiskey and puffing on a joint. A trader friend of mine and I had a discussion about that – I pointed out pot was legal now, and he shook his head and said that it wasn’t about legality, it was about the judgement of the already-loose-lipped Musk; what sorts of things might he say while on a live show, under the influence? We all have our glass of wine, but few of us choose to go on the air while doing so, and probably not when we are the head of a 46 billion dollar company – and certainly not after the “pedo” comments, and the “going private” comment, and the “emotional” Times interview. Musk is totally out of control right now, and the bondholders are saying quite clearly, “we prefer that our CEO NOT smoke pot on comedy shows.” [FD: I’m short TSLA; heck, I think he should do this a couple times a week.]  https://oilprice.com/Latest-Energy-News/World-News/Baked-Musk-Hints-At-New-Tesla-Smart-Home-Product.html

Crude fell -1.87 [-2.69%] to 67.60. Crude made a new high on Tuesday that didn’t hold, and then sold off for most of the rest of the week. Friday saw a new low to 66.86, but enough buyers appeared to drag prices back up to even by end of day. Thursday’s EIA report looked ok (crude: -4.3m, gasoline: 1.8m, distillates: 3.1m), although the gasoline build was unexpected, but the market wasn’t happy with the results, selling off hard after the release. Crude weekly issued a sell signal this week, as did the daily, while the monthly remains in an uptrend.  Its hard to know where crude goes from here. 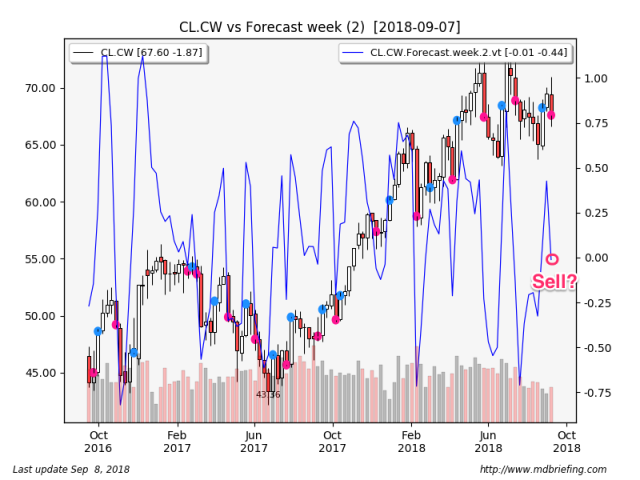 The comment period for the $200 billion tariff plan is over but the trigger has yet to be pulled, Trump is hinting at even more to come, a former Trump campaign advisor was sent to jail for 14 days for lying to the FBI, Turkey’s central bank hinted at a rate increase, the buck edged higher, while silver and the miners plunged to a new multi-year low.

Big bar gold premiums remain low, silver’s premium is slowly moving higher, and ETF discounts increased somewhat. There is no shortage of gold at these prices – at least according to my numbers anyway. Silver seems to have slightly larger than normal premiums.

The gold COT report shows yet another record low in the managed money net position, while commercials continue to cover their gold shorts. Silver is now also showing record positions, with commercials moving even higher into net long territory.

While the metals rebound two weeks ago was clearly a headfake, the new lower-low this week in silver and the miners didn’t look all that bad. A second low, not too far below the previous low, can be the sign of a rebound in progress. That’s what the “bullish divergence” in the RSI is all about – signs of slowing downside momentum that can precede a reversal.

Of course, if the failure of the previous low had led to an even-larger move down, that would tell us we can expect more lows ahead. But that’s not what happened.  The cratering that happened a few weeks ago was followed by a relatively gentle breakdown.  That’s a positive sign.

Some caveats apply. Trump has yet to actually pull the trigger on the tariffs on $200 billion in Chinese goods; when he does this, that could conceivably blow copper and the other metals to new lows. If you wanted to play it safe, you’d wait for the “tariff” shoe to drop before jumping in.

However the commercials have already positioned themselves for a reversal in both gold and silver – in fact, they are historically well-positioned for such a rally, and the short-covering by the commercials this week especially in silver was very strong.  Of course, they need to amass large positions in order to move the needle at their firms, and so they must move with the speed of a supertanker to avoid wanging prices around while they accumulate.  As a result, they need weeks to position themselves properly.  That’s why they cover during capitulation; they need big volume in order to make their move.

You can see in the chart below that the commercials have never been net long silver since the COT series started back in 1986.  Commercial net broke into positive territory last week, and the 13k move this week was shockingly large.  The move was all about short-covering.  This is about as bullish a signal as the COT puts out. Bullion banks are ringing the cash register, madly, down here at silver = 14. 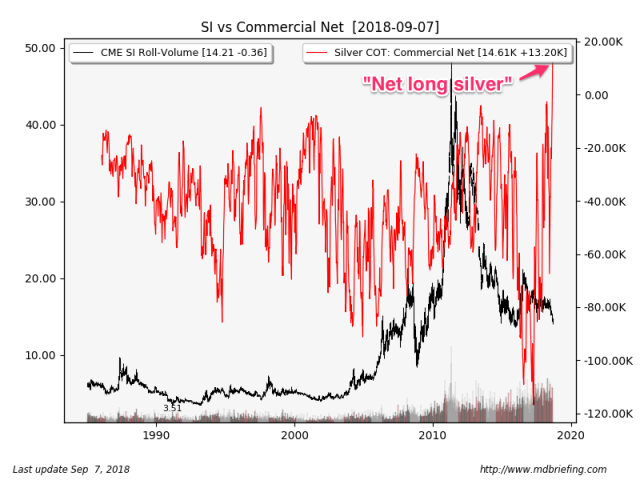 And did I mention the gold/silver ratio at 84.64?  That’s also a historic indicator for the metals – at least over the past 20 years anyway.

Once Trump fires off those tariffs, we will know for sure if the low is in.  If copper & silver don’t sell off on that news, it will be time to buy with both hands.