This week’s metals sector map was unusual. Palladium led – probably because Russia produces 40% of the world’s palladium and there is talk of more sanctions – but second in line was silver. Gold brought up the rear, possibly because of a strong dollar rally at end of week.  Miners were somewhere in the middle, with silver miners doing best. This all suggests…what? The safe haven bid retreated, we have hints of a concern over inflation, and there are possible sanctions too. Its a complicated picture.

Gold fell -11.00 [-0.82%], with gold issuing a sell signal on Wednesday, and then dropping more seriously on Friday. Daily forecaster closed the week at -0.24, which is a modest downtrend. Gold ended the week below its 9 MA, which is a bearish sign. Weekly and monthly forecasters are in downtrends. Earlier in the week, gold in Euros looked as though it might break out, but by Friday, gold in euros remains in a downtrend in all 3 timeframes. This week was not kind to gold.

The June rate-increase chances rose to 98%. 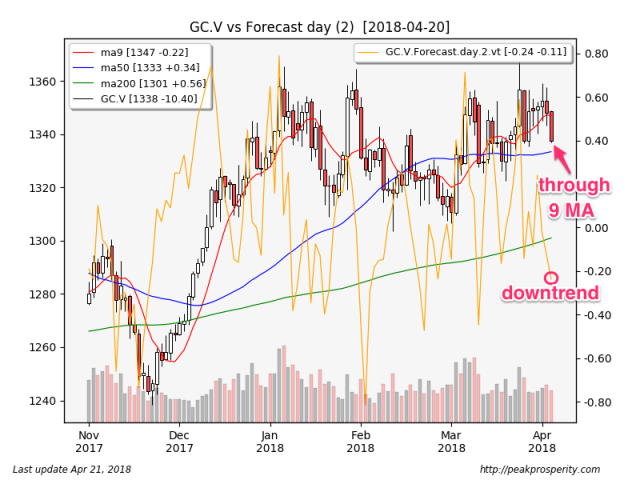 Silver rose +0.47 [+2.82%] this week. Silver moved higher for 4 days out of 5 again this week; in spite of selling off on Friday, silver appears to be on a roll, with the daily forecaster closing the week at +0.20. The breakout on Wednesday took silver through 16.90 resistance, and on Friday it appeared as though it was retracing a bit. But silver is now in an uptrend in all 3 timeframes. This doesn’t guarantee a positive outcome if the metals complex starts to sell off – or if the dollar starts to rally more seriously – but certainly silver looks ready to take off if the rest of the group continues to move higher. 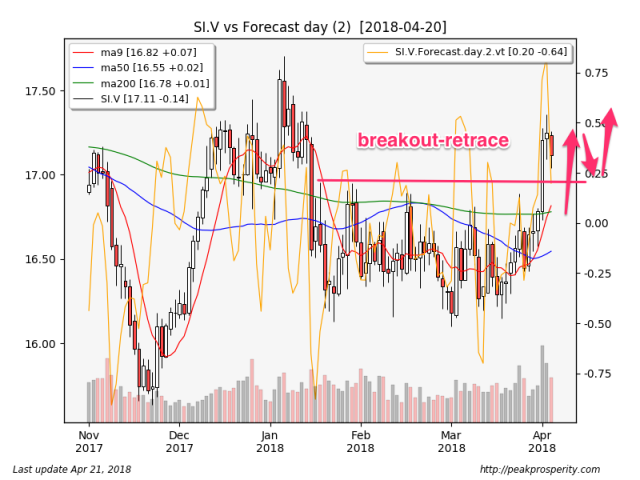 The miners moved higher in fits and starts this week, with XAU up +1.24%. GDXJ printed a weak swing high (33% bearish), as did GDX, but the XAU daily, weekly, and monthly forecasters all remain in uptrends. XAU also remains above all 3 moving averages. Although XAU fell on Friday, the dragonfly doji looks reasonably bullish; it tells us that the miners had a bid even though gold fell relatively hard.

The GDX:$GOLD ratio was flat, while the GDXJ:GDX ratio rose +0.79%. That’s slightly bullish. 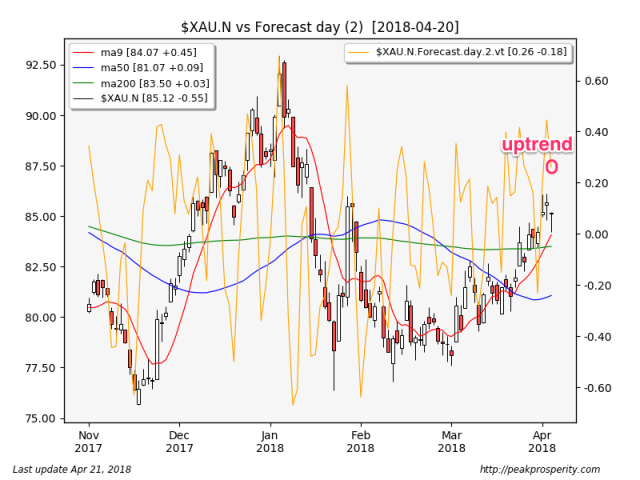 The buck rose +0.53 [+0.59%] to 89.95, climbing for 4 straight days, with the largest move coming on Friday [+0.41%]. The buck is now convincingly above its 9 and 50 MA lines, and is nearing the top end of its recent trading range. DX forecaster issued a buy signal on Friday, and the weekly forecaster issued a buy signal this week also. The monthly is right on the edge of a buy as well, currently at -0.01. Will the buck finally break out of its trading range after 3 months of moving sideways? Its hard to say. 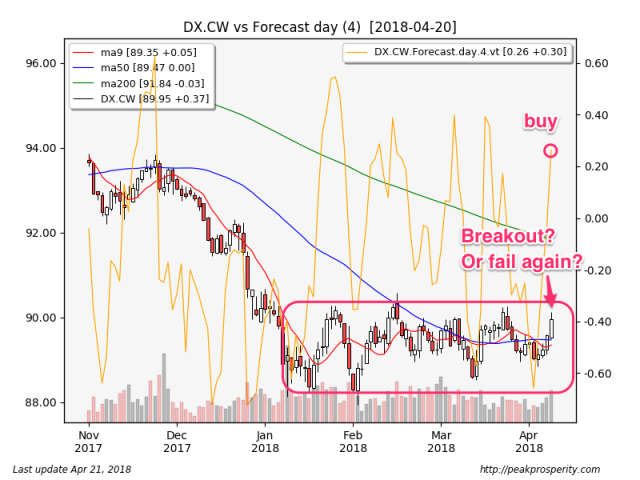 SPX rose +13.84 [+052%] to 2670.14. Equities rallied for the first half of the week, and then dropped for the second half, printing a swing high on Thursday as well as a forecaster sell signal. Friday SPX closed below both the 9 and 50 MA lines. Still, SPX weekly and monthly forecasters are both showing buy – although the monthly still looks weak. Which to believe? The chart pattern looks like a big descending triangle, and that’s bearish.

Sector map shows energy equities in the lead, with defense close behind. Consumer staples and homebuilders brought up the rear. The big plunge in staples had to do with tobacco stocks, which are showing signs of a global decline in revenues. I’d say the map is neutral; financials are in the middle of the pack, and tech actually lost ground. The tech troubles might be due to a sell-off in AAPL, down -5.16% this week on a weak forecast from an AAPL supplier in Taiwan.

Gold fell in most currencies, dropping in XDR by -7.01. 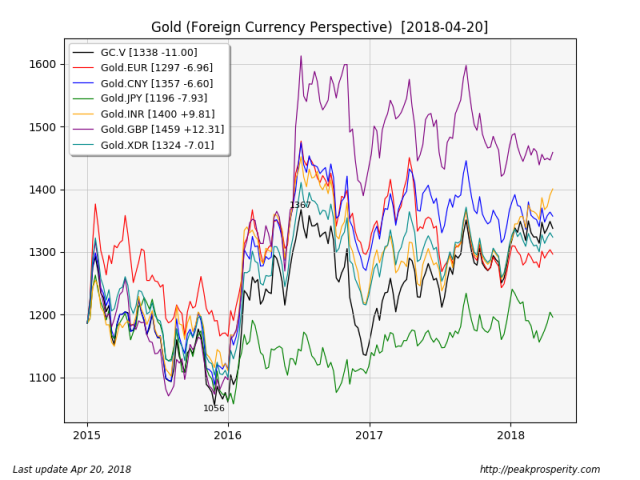 Bonds fell relatively hard, with TLT down -2.02% on the week. Even with the SPX sell-off on Friday, TLT still dropped -0.72%. TY confirms the trend, dropping -0.89%, making a new multi-year low on Friday. TY weekly issued a sell signal this week, and at this point TY is back in a downtrend in all 3 timeframes. The 10-year treasury closed the week at 2.96%, a level not seen since January 2014. Bonds appear to be suffering from hints of commodity-price inflation combined with the prospect of too much supply – supply as far as the eye can see.  An IMF forecast suggests that the US Debt/GDP ratio will surpass that of Italy by 2023. https://www.newsmax.com/finance/economy/us-debt-italy-imf/2018/04/18/id/855278/

JNK fell -0.47% this week, with a swing high on Wednesday, and a forecaster sell on Thursday. JNK appears to be echoing the risk off sentiment in equities. BAA rates also climbed, up 7 bp, which pulled the BAA forecaster back into a (rate) buy signal – which is negative for price. That said, BAA rates are not rising as quickly as the 10-year, which suggests that economic concerns are mostly contained, at least for now.

Crude rose +0.73 [+1.08%] to 68.06, making a new multi-year high to 69.54 on Thursday. The strong rally on Wednesday was responsible for the gains this week in crude, with at least half of the rally happening after the surprisingly bullish-looking EIA report [crude: -1.1m, gasoline: -3.0m, distillates: -3.1m]. So far at least, fears that the shale producers would return the global oil markets back to surplus have not come to pass. On Friday, Trump attempted to tweet-down the price: “Looks like OPEC is at it again. With record amounts of Oil all over the place, including the fully loaded ships at sea, Oil prices are artificially Very High! No good and will not be accepted!” Price did drop, but it could also be just profit-taking after a substantial move up. Forecaster did issue a sell signal on Friday’s move down, but oil remains in an uptrend for both the weekly and monthly timeframes.

* The GLD ETF tonnage on hand was unchanged, with 866 tons in inventory.

In silver, the commercial net fell by -12.4k contracts, with 7k long liquidation, along with 5.3k new shorts. Managed money net rose by 22.4k contracts, which was mostly 16.3k shorts covered, with 6k of new long buying added in. These were large changes, and we could have another 3 weeks of this if the managed money short position is completely unwound.

First trade war, then actual war prospects, and now…relative calm prevails. Concerns over possible US sanctions on Russia have hit palladium prices, crude oil continues to drive higher (with some whispers about $100 oil possibly in the offing), North Korea has promised to dismantle its nuclear testing facility prior to the start of negotiations – it seems as though the world see-saws between bad news and good news on a weekly basis.

The “wash cycle” has started in silver – managed money is starting to cover their short positions and go long as silver is starting to jump higher. There are still a large number of contracts left to cover, but we could see a $2-3 move before it ends, if the stars and moons align. Gold remains in a COT no-mans-land, neither bullish nor bearish.

The positive influences I see for PM are: SPX still appears to be in its bearish descending triangle, and it also appears that traders are now more willing to sell even tech darlings like Apple just on rumors of weakness in the supply chain. 10-year rates are also heading higher after a 6-week pause. Over the long haul, higher rates will cause the overall economy to slow down. In addition, commodities made a new multi-year high this week, one that dates back to late-2015.

The fly in the PM ointment – one that helped cause gold to plunge $10 on Friday – is that the dollar has floated to the upper end of its trading range. If it decides to break out to higher levels, that would drag silver and the rest of the commodities right back down to earth.