This week the PM sector map is a sea of red once more; palladium fell the most, followed closely by the mining shares. Gold did best, as it generally does during a PM downtrend. In fact, with the buck rallying +1.43%, gold’s fall of -1.27% suggests that gold is actually moving higher in international terms. The mining shares – not so much.

Gold fell -17.00 [-1.27%], which makes it once again the best performing element of the PM group. The big drop came on Tuesday, for no particular reason that I could see. Friday’s candle was a spinning top and it was an inside day, so no reversal. Forecaster moved up +0.07 to +0.02, which is a (tepid) buy signal for gold.  Definitely the pace of the downtrend has slowed greatly.  Does this mark the low?  If the buck continues to rally, I’m not so sure.

While gold’s drop (-1.27%) is less than the rally in the buck (+1.43%), I believe gold should have performed better given the chaos in the equity market. Something is a safe haven because people believe it to be so. Right now, traders are moving into cash, not into gold, as their safe haven. This tells you that faith in government and the banking system remains mostly intact.

The March rate-increase chances fell to 72%. 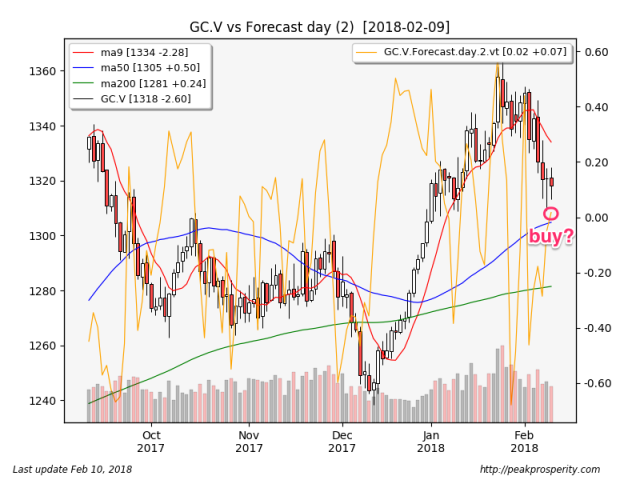 Silver fell -0.25 [-1.54%] to 16.30, with most of the loss happening on Wednesday. Friday’s candle print was a high wave, which was a 45% chance of marking the low; the forecaster was mildly happy with it, rising +0.13 to -0.44. In the past, forecaster has done a decent job of identifying upcoming reversals in advance – it starts moving higher in anticipation of the low. So far, it hasn’t done so here. My guess is, that means we have another drop ahead of us – perhaps Monday or Tuesday – but that will take us down to 15.75 support which hopefully should hold.  I might be too pessimistic, but it doesn’t feel as though the selling in silver is quite over just yet. 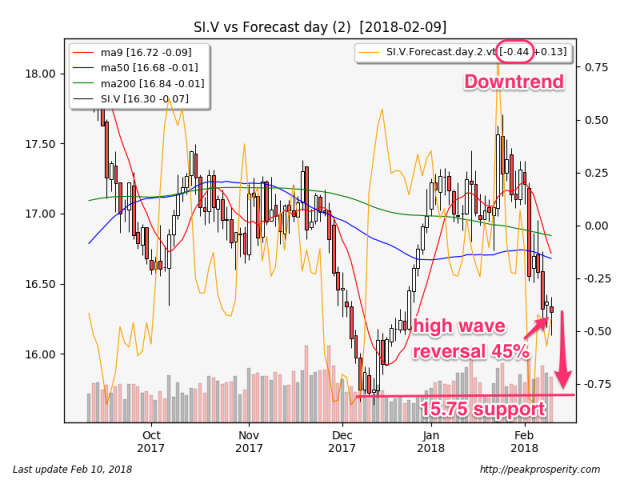 The miners had another bad week, but there were signs of hope on Friday: GDX was down as much as 4% intraday, smashing through the previous low and looking quite bearish, but in the last 15 minutes of trading, there was a massive wave of buying that pulled GDX back to even. Candle print was one of: takuri line/southern doji/dragonfly doji, which added up to a 62% chance of a bullish reversal. GDXJ just had a spinning top, but it too had a 60% chance of a reversal as well. GDXJ (and XAU) is looking a bit stronger than GDX, since it managed to bounce off support rather than smashing through it.

Today I’ll show that GDX chart because Friday’s reversal bar was so remarkable. There might be a bit more work to actually start moving higher again, but my sense is there was a huge amount of short-covering that happened on Friday – the shorts had a 20% gain on the recent miner plunge, and it appears that Friday at 3:50 pm was the moment they rang the cash register.  Volume was immense. 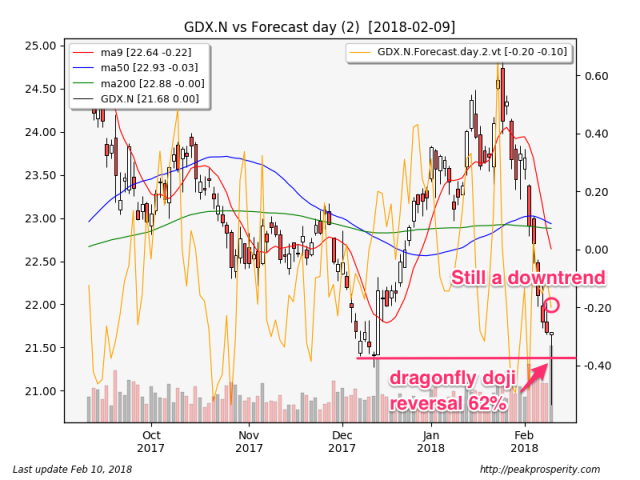 The buck rallied +1.27 [+1.43%] to 90.16, moving higher 4 days out of 5. DX forecaster issued a buy signal on Tuesday, and ended the week at +0.50, which is a strong uptrend for the buck. Was the move about a safe haven from all the equity-market turmoil? About the problems Germany is having forming a government? About the upcoming Italian elections (now just 3 weeks away)? Or maybe the dollar selling was just overdone. Its hard to know, and the forecaster doesn’t care – it just reports what it sees.

Weekly forecaster has improved, but remains in a downtrend. Monthly is right on the cusp of a bullish reversal. Could this be it for the longer-term dollar downtrend? It looks like it might be, at the moment. 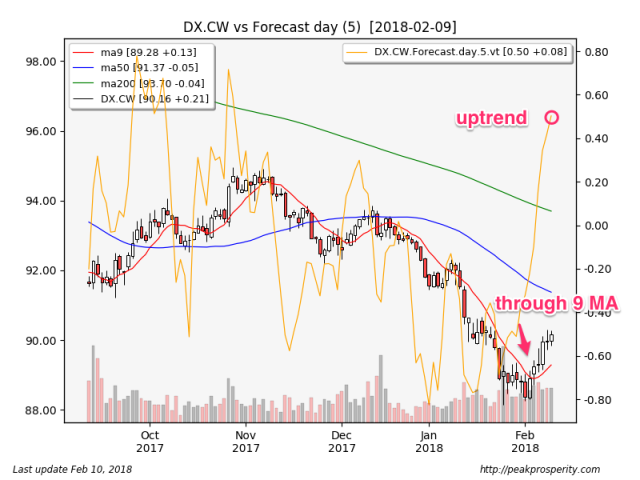 SPX continued dropping, down -142.58 [-5.16%] to 2619.55. Damage happened on Monday and Thursday, with Tuesday and Friday showing strong reversals. On Friday, SPX made a new low [to 2532] in the afternoon, but bounced back 80 points by end of day. It seemed to me that the reversal on Friday lined up fairly closely with a reversal in crude oil prices, which bounced off 58 and rebounded a full point. Certainly energy was by far the worst-performing sector this week; we could say that much of this week’s correction was led by plunging energy equities, and so the reversal in crude prices on Friday could have been decisive.

Friday’s high wave candle had a 69% chance of being a bullish reversal bar, but the forecaster didn’t bounce on Friday, and remains at -0.87, which is very bearish. Weekly forecaster issued a sell signal last week, and has dropped deep into bearish territory, and the monthly forecaster flipped to sell this week.

Sector map has energy leading lower – with XLE plunging 2% more than any other sector, dropping -8% on the week. Crude was down 9% on the week – certainly that’s why. Financials did second-worst, which is always bearish, while utilities did “best” by only dropping -2.65%.

Gold was mixed this week, rising in Euros and GBP, while dropping in the other currencies. Gold fell -9.79 in XDR. 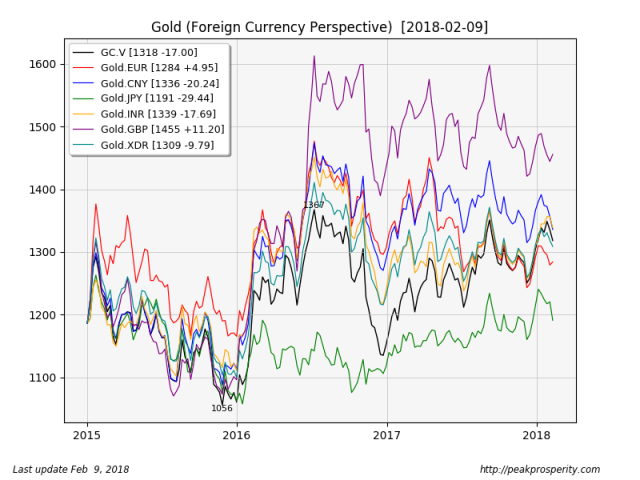 Bonds fell again this week, with TLT off -1.37%. Bonds did get a bid to some degree on the days when the equity market sold off hard, but overall bonds still look extremely weak. How else can you explain a 5% drop in equities and a 1.37% drop in bonds? TLT made new lows on Thursday, and struggled on Friday.

TY (10-year treasury) staged a strong rally on Tuesday, with its forecaster issuing a buy signal, but that didn’t last long – most of that rally was erased by end of week, with TY closing up just +0.08%. Still, TY forecaster remains close to a bullish reversal – in the daily timeframe anyway. Weekly and monthly still show a downtrend, with the monthly timeframe looking the most bearish. 10-year rates rose from 2.77% to 2.85%.

JNK fell again also, dropping -1.63%, making a dramatic new low on Friday. At one point on Friday JNK was off -1.5%, but it managed to bounce back fairly strongly when the equity market rallied. This week, the JNK:IEF ratio tumbled, which is a danger sign overall.

Crude cratered, plunging -6.08 [-9.35%] to 58.94, falling 4 out of 5 days, driving through the 9 MA and then the 50 MA. Forecaster ended the week at -0.75, which is a strong downtrend. Friday’s candle print was a long black candle, which might be a reversal (48%). Certainly there was a bounce that happened on Friday that was completely absent during the rest of the week – and that bounce in crude lined up with the rebound in equity prices on Friday also. XLE was down more than 3% intraday, but ended Friday almost flat. Crude is in a downtrend in all 3 timeframes. Volume this week was extremely heavy – my guess is that those managed money longs were bailing out of their positions left and right. My gut suggests we have a bit more downside ahead of us, however.  Will support at 57.50 hold?  I’m not sure. 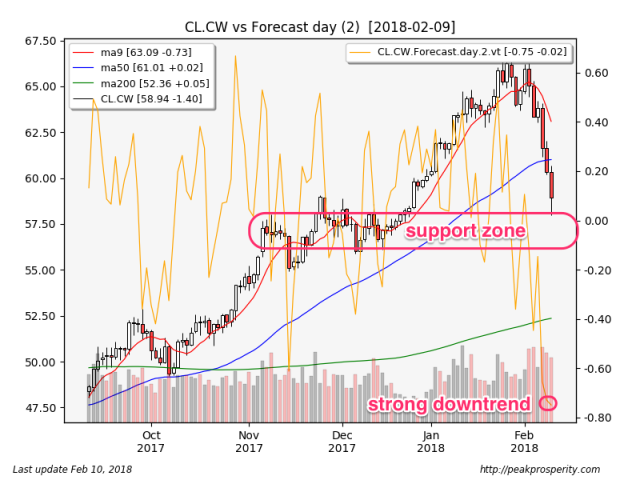 * Bullion Vault gold (https://www.bullionvault.com/gold_market.do#!/orderboard) shows no premium for gold and a 1-2% premium for silver.

In gold, the commercial net position rose 19.6k contracts, which is a medium-sized change. That was mostly short-covering (-15.6k) but some new long buying too (+3.9k). Managed money net fell by -24.6k, with almost all of that being long liquidation (-24.2k) with a few new shorts (+413) added. The usual thing is happening – managed money longs are being rinsed out, and commercials are ringing the cash register. We are far from any sort of low.

In silver, the commercial net rose by 16.6k contracts, with 9.7k shorts covered, and 7k longs added. This was a large change – one more week and we will be at a low for silver. Depending on what happened Wed-Fri, we may be there today. Managed money net fell by 23.4k, a very large change, which was evenly split: 11.8k shorts were added, and 11.6k longs were rinsed out. Managed money longs have dropped back to 2014-2015 levels. We could be at or near a COT low for silver for managed money too.

No after-hours spikes this week.

While last week was about bonds, this week appears to have been about oil. An 9% drop in crude oil prices caused a 8% drop in energy equities – which led the overall market down 5% in a very volatile week. The 10-year treasury and gold held up best; they are normally safe havens in times like this, but both assets were unable to meaningfully move higher. For whatever reason, participants are content to weather the current storm in cash – from this I conclude that confidence in government and the banking system remains intact.

As with last week, almost everything I track was sold: gold, silver, miners, copper, platinum, palladium, oil, equities, and the long bond. Only the dollar rallied.

The gold COT report saw the usual pattern of the “rinse” – where managed money longs bail out and the commercials ring the cash register as price declines. Silver’s rinse cycle was much more intense, and as a result, silver is close to a COT low – if not this week, then certainly next week.

This lines up with silver being at a relative high for the gold/silver ratio. If you are a contrarian, it may be time to start thinking about swapping your gold for silver, since silver is cheap here relative to gold. Over the past 20 years or so, whenever the gold/silver ratio has moved above 80 – and that has only happened 4 times – it has been a fairly good buying opportunity for silver. Might silver have further to fall? Certainly it might. But the move above 80 got my attention, along with the COT report suggesting we might be nearing a low for silver.  Let’s see what happens next week.  We can hope for one more big flush down to 15.75. 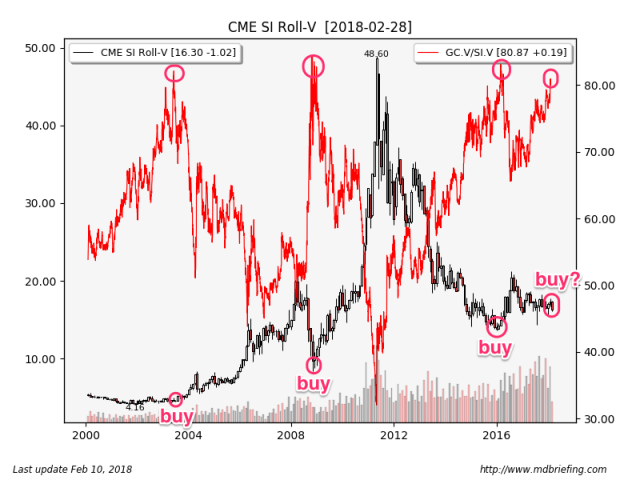 Platinum might be a good deal too after its current correction comes to an end. The gold/platinum ratio is 1.36, which is also quite high, with the top being 1.42 set back at platinum’s year low in December.

Larger picture – last week the selling was about bonds, and this week it was about oil. What then for next week? Is the selling in equities over? Time to buy the dip? Armstrong suggests no, not just yet. There is probably more selling is ahead, but (according to my reading of his tea leaves) a reversal may happen within the next 3 weeks. And, the way he puts it, the deeper the drop we see now, the greater the “slingshot” will be for the “safe haven/private wave” rally in equities that is yet to come.

How can equities rally with valuations so extended already? Armstrong sees equities as a “big money” safe haven once trust in the government starts to materially decline. If you can’t hide in government bonds, and you don’t trust the banking system, what’s left? For the individual, it is gold, and for big money, it is equities and high grade corporate debt. I only talk about Armstrong’s “public-private wave” theory because he has been right about a lot of things so far, and he’s got this computer that correlates everything across the long sweep of history, and this is what it has concluded will occur.

Currently, trust in government remains, as does trust in the banking system, so right now neither safe haven scenario is in play. Gold is being bought – it is $250 off the lows seen two years ago – but it is not yet acting like the safe haven we expect it to be. Not yet anyway.