Trend is down in the US equity market, and in the economy, so that's what we have to look forward to going forward.  But in re-reading the 2008 timeline, I am reminded of just how dreadful the series of events were that happened during that period.

This article on debt levels seems relevant, even if the analysis is limited.

The world's debt is alarmingly high. But is it contagious?

The fact that rich-country sovereign debt is not mentioned is unfortunate considering that gov't debt increased faster from '07 to '14 than any other category: 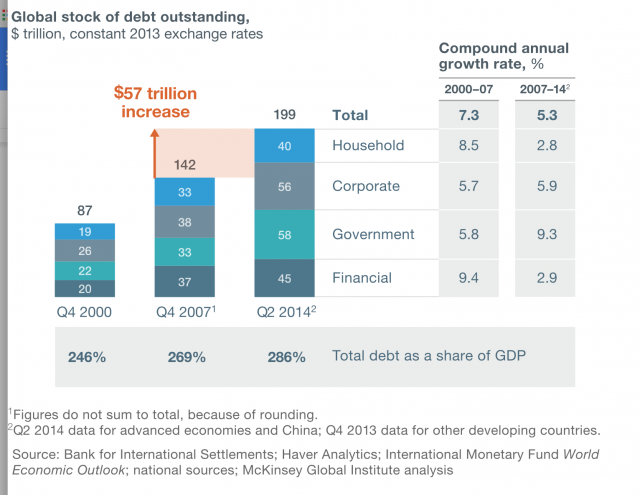 But it has some good arguments regarding Chinese and other emerging market debt.

Some interesting parts (parsed together):

The world has continued to borrow hand over fist since the financial crisis, adding nearly $60 trillion since 2007 in the process of pushing the worldwide debt load to $200 trillion, or nearly three times the size of the entire global economy.

The potential for disaster depends on how contagious a new round of defaults would prove and whether writedowns in one part of the world could cause losses in others.

Since 2009, the average level of private debt in emerging economies has gone from 75 percent of GDP to 125 percent, according to the Bank for International Settlements. Private debt levels in China and Brazil are now double the size of the national economy.

Hedge fund billionaire Kyle Bass, who made a fortune betting against the U.S. subprime crisis, is telling his investors that China's state-owned banks may take losses upward of $3.5 trillion—four times more than what U.S. banks got hit with during the 2008 financial crisis.

The trouble is that no matter how much credit gets added to its economy, China's slowdown is inevitable. Adding leverage to an already leveraged system may only make the reckoning more painful.

So long as China's government is willing to backstop the country's banking system—and so far all indications are that it is—there's little chance of liquidity freezing up like it did in  the fall of 2008 when U.S. banks started running out of money.

[Moving beyond China,] more countries have floating exchange rates than in the past, giving them the flexibility to devalue in the face of a rising U.S. dollar. "That's made a tremendous difference," says Kenneth Rogoff, an economist at Harvard who has written extensively on the nature of debt. "In my opinion, floating exchange rates are the only reason Russia and Brazil haven't had a financial crisis yet."

Any attempt to forecast the risk of global debt crisis wouldn't be complete without revisiting one of the main culprits from 2008: the dreaded credit-default swap….Today, the total CDS market is a fraction of that inflated size, having steadily shrunk down to $16 trillion by the end of 2014, according to the Bank of International Settlements. Things may still go bad, but, like always, whatever goes wrong will be different from the last time.      Source

I used to believe that the whole swooping-in thing made it so that China was immune to debt issues.

Its actually worse than he lays out.  The money for the "swooping" has to come from someone.  If it is printed into existence, that's inflationary, and that hoses people and savers.  If it is taxed from someone, whoever it gets taxed from, loses.

Each lender in China expects to get paid back.  The government can either pay them back with tax money, or with printed money.

The current guess is that China will solve the problem with money printing.  If they do, that hits the currency, and that's why money is fleeing China right now.  Swooping will (probably) be paid for with printed money, and there will have to be a devaluation as a result.

So my sense is, money will flee China until the peg blows up.  Its not about Kyle Bass, its about a whole bunch of high end Chinese people who are fleeing in advance of the inevitable currency devaluation.

No contagion though.  Losers are anyone holding RMB, and most likely, regular people in China.  Anyone with assets does ok.  Such as gold, for instance.  If I were in China right now, I'd be converting all my RMB into gold.  I don't think there is any chance that China will allow any serious level of defaults that could lead to contagion.  They'll print instead, and they'll release the peg, and that will be that.

Just my opinion, of course.

If China devalues as you, Bass and a lot of others think is inevitable, isn't that effectively exporting deflation to the rest of the world? Won't many other currencies then devalue to maintain parity in the next great round of the currency wars as they try to avoid the deflation wave? Does the USD then swallow the tsunami again and get strengthened? Gold goes up in every other currency but USD. That lasts right up until the point that the US joins the race to the bottom by printing too and trying to send the problem right back to China…

Isn't this always the solution of Central Bankers? Sounds cliche.

From what I understand, some significant percentage of loan principal was stolen through corruption.  The stolen money has left (is leaving) the country to buy condos in Vancouver, London, etc.  Normally this fleeing money would cause the currency to fall, but China is intervening and propping the currency up, using their foreign currency reserves to do it.

Once the reserves run out, if the stolen money continues to flee, it will cause the currency to move big time.

What is left behind is the massive pile of debt, with a lot fewer productive assets than you would hope to support that debt.  Debt is therefore fundamentally unpayable; only choices are widespread default (currency wins, holders of cash win, but creditors lose, holders of real assets lose, deflationary crash ensues), or "swooping in" (currency loses, holders of cash lose, creditors get paid back in devalued RMB so they lose too, holders of gold and real assets stay win (they stay even), and no deflationary crash).

China won't be doing it because of some clever strategy.  They're doing it because they don't want to pick choice #1, so choice #2 is what's left.  And once they are unable to intervene to prop the currency up, that's when it will get interesting.  Will money flee even faster?  That I don't know.  It will depend on the rate of swooping, I suppose, and that all-important confidence.

The semi-panic repaying of all the dollar debt by Chinese businesses is also exacerbating the fleeing-money problem.  If I had a business in China and I expected the currency to move against me in the near future, I'd swap the (low interest rate) dollar debt for (higher interest rate) local currency debt as fast as I could.

As for exporting deflation, I'm not sure that's the right term.  Deflation is a contraction of money and credit; I don't see that is what they would be exporting.  They will be exporting lower prices via the exchange rate, that's for sure, and that will be a big problem for industry in other countries.

All the over-indebted nations have this same problem.  Do you pay down the unpayable debt by widespread default and a deflationary crash, or by swooping in, printing money, and rescuing everything that might lead to contagion/debt deflationary crash?

Its less of a cliche, and more of "which door do you pick?"

(A third door is what Japan picked: pretend for 20 years that the debt is still A-OK.  2 lost decades was the result.  They got deflation, just very, very slow deflation over 20 years; I worked there 20 years ago.  Prices for, say, a meal are cheaper now than they were 20 years ago.  Its a strange feeling.)