On Friday gold rose +7.90 [+0.61%] to 1305.10 on moderate volume, while silver rallied +0.07 [+0.44%] to 16.98 on moderately light volume. The buck sank further, losing -0.52%, which accounted for almost all of gold’s move higher. The dollar downtrend continues to accelerate, and commodities continue to move higher. Looking at the commodity charts, it appears as though the rally switch was flipped on or about Dec 11th in the commodity complex.

This week – last week of trading in 2017 – was positive overall for the metals, but there were some warning signs as well. While silver led gold, the miners were clearly lagging. Juniors outperformed seniors, which was good, but both miner ETFs did not do as well as gold. That’s not a great sign. Copper appears to have slowed its mad rush higher – not so much palladium, which is up a massive 56% in 2017. Cold fusion? Who knows. Most elements are now back above their 200 MA lines.

Gold rose +26.00 [+2.03%], ending the week blasting through round number 1300. Since the lows set back on Dec 11th, gold is up $62. Is anyone paying attention? While the forecaster faded during the week, ending at +0.20, Friday’s long white candle was a bullish continuation. Gold’s RSI7 is 86, which is significantly overbought. That’s because gold is up 10 of the last 12 days.

Gold is now in an uptrend on both the weekly and the interim-monthly timeframes – buy signals for both. Only caveat is that the monthly is still awaiting some banking information from the Fed before it is finalized.

The March rate-increase chances closed the week at 56%. 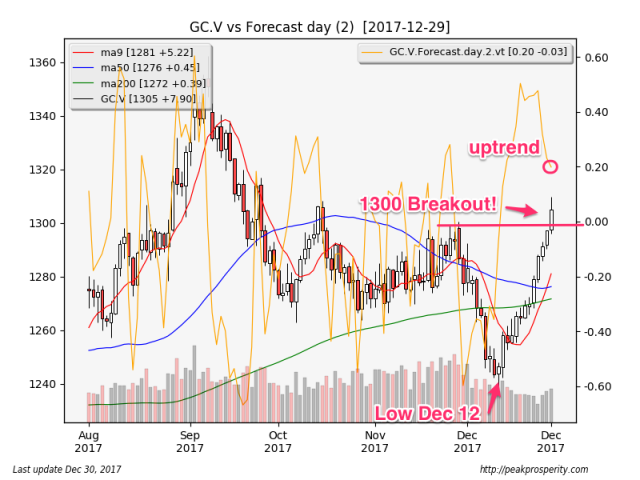 Silver’s weekly forecaster remains in a strong uptrend (+0.38), but the Dec monthly still remains in a modest downtrend. Silver still appears to be underperforming gold – longer term anyway. It has some work to do to catch up. 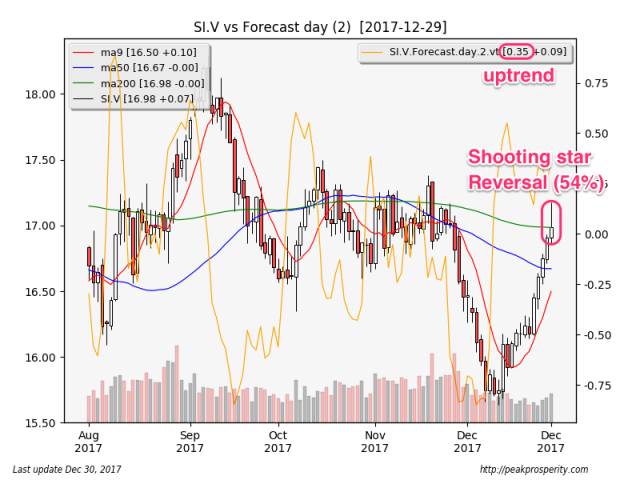 Miners underperformed, rallying strongly on Tuesday but then succumbing to selling pressure for the remainder of the week. Still, buyers still showed up and bought the dips all week long, even though the miners are hovering around RSI7=80, which is overbought. The XAU forecaster wasn’t pleased with the selling, issuing a sell signal of its own on Thursday, ending the week at -0.29.

On the weekly charts, XAU remains in an uptrend (+0.33), and while the monthly forecaster remains in a downtrend (-0.09). 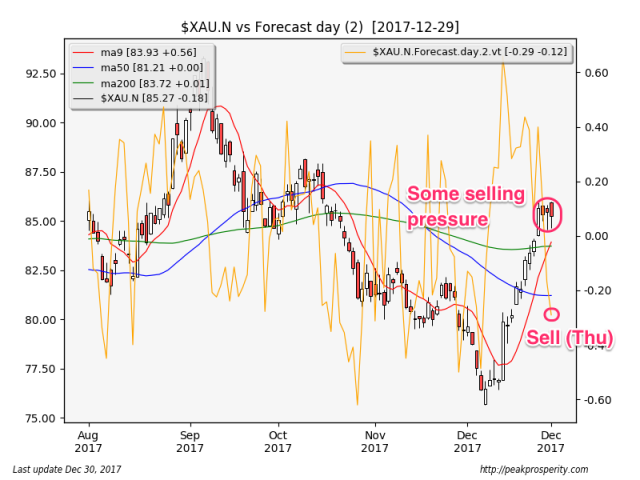 The buck plunged -1.10 [-1.19%] to 91.82, making a new low on Friday. The move lower in the buck appears to be accelerating, with a meaningful support break happening on Friday. Money is definitely fleeing the dollar, which appears headed to a re-test of the 91 low set back in September. Friday’s black marubozu candle might be a reversal (35%) but probably isn’t. Forecaster closed the week at -0.54, which is a relatively strong downtrend.

Weekly forecaster remains in a downtrend (-0.20), while the interim monthly forecaster issued a sell signal. Ouch. That’s down in all 3 timeframes. Is this because of the commodity rally? Increased inflation expectations? Its hard to say. So much for my “dollar rally” thesis. 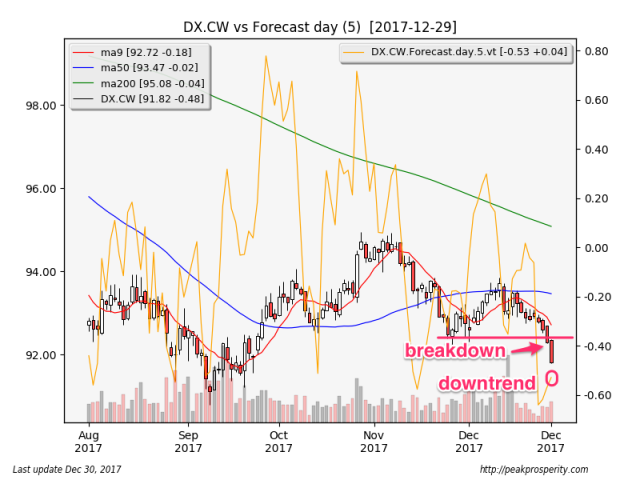 SPX fell -9.73 [-0.36%] to 2673.61. After three days of slow movement higher, SPX sold off hard right at end of day on Friday, the last trading day of the year. The bearish engulfing candle had a 43% chance of marking the top – but the daily forecaster was not worried, ending the week at +0.50. The move took SPX below its 9 MA for the first time since mid-November.

Weekly and monthly charts both show SPX remains in an uptrend although the weekly forecaster dropped -0.14 to +0.12. If it continues at this rate, it will emit a sell signal next week.

Sector map looks like the market ended the year moving back into yield, with tech and telecom the biggest losers. I’m not sure that means anything. 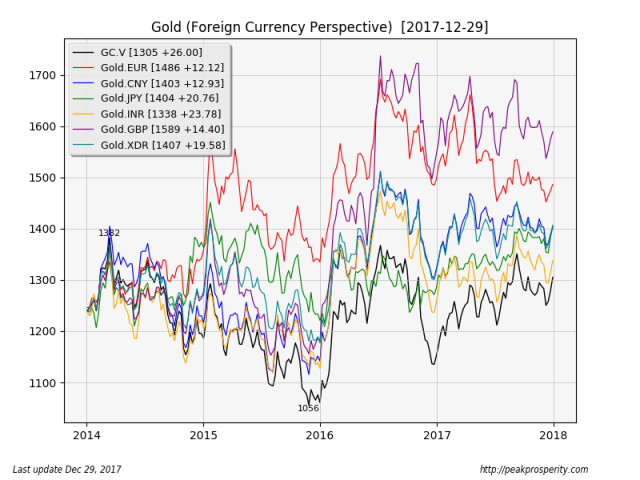 TLT bounced back strongly, rising +1.68%. Boy, its smash one week, and rally the next. TLT forecaster issued a buy signal on Tuesday, and ended the week at +0.55. Of course, that could all change next week, the way things have been going. TY moved up +0.38%, with its forecaster issuing a buy signal on Wednesday. TY weekly and monthly remain in downtrends, however.

JNK rose +0.25%, moving higher off last week’s buy signal. I’m still not sure about JNK, but the BAA bond yield charts remain in downtrends, both weekly and monthly, which suggests that lower quality debt still has plenty of buyers.

CRB shot up +3.19%, breaking out to a new closing high to values last seen in early 2017. As a reminder, this was only a 4-day week, and a holiday week at that – this was a large move. All 5 sectors rose, with energy leading (+3.77%).  Here’s what that looks like: you can see that the rallies started (roughly) on Dec 11, and it appeared that industrial metals was the sector in the lead most of the time.

Crude rose +1.74 [+2.98%] to 60.10, breaking out sharply on Tuesday (because of Libya’s pipeline explosion?) and managing to close above round number 60 on Friday. The move on Friday saw a failed rally, however, with prices dropping 40 cents off the highs, resulting in a shooting star candle which had a 45% chance of marking the top. Forecaster concurred, dropping -0.19 to -0.07, which is a sell signal. The weekly forecaster remains in an uptrend (+0.14), while the monthly is still in sell mode (-0.16). The EIA report was bullish this week (crude -4.6m, gasoline +0.6m, distillates +1.1m), and that helped prices to some degree also. Rig counts were down 76, mostly because of cold weather in Canada.

* SGE premiums over COMEX are at +2.42, down significantly as a result of gold’s rally.

* The GLD ETF tonnage on hand was unchanged, with 837 tons in inventory.

* Bullion Vault gold (https://www.bullionvault.com/gold_market.do#!/orderboard) is at a slight discount for gold and a slight premium for silver.

In gold, the commercial net position fell -21k contracts, which is just a moderate drop. Almost all were new shorts (+20k) but a few longs (-757) were sold too. Commercial long position is almost entirely intact. Managed money net rose by +27k, much of it short covering (-15k) but some long buying too (+11k). Commercials went short, managed money covered, but overall it still looks bullish.

To me the overall commodity rally was the real news – the metals were just one component of a larger picture this week, and the plunging dollar certainly didn’t hurt – more than half of gold’s move was a currency effect.  The mining shares were the sole sour note, running into a fair amount of selling pressure for much of the week.  I suspect traders are ringing the cash register after the 13% rally.

Gold and silver big bar shortage indicators are showing no sign of shortage; premiums on big-bar gold and silver are normal, GLD tonnage was unchanged, and ETF discounts were more down than up. Shanghai premiums dropped substantially, as is normal after a gold rally.

Next week is the new year. We get FOMC minutes on Wednesday, a Non-Mfg ISM report on Thursday, and Nonfarm Payrolls on Friday.

Also starting next month: the Fed starts unwinding the balance sheet more seriously – 1.4 billion dollars per trading day.  Commodity rally = inflation, plus an increase in supply.  Do we think that’s good for bonds?  No, it is not.

So anyone following my writings about PM over the last number of years knows that I’m not a gold cheerleader.  When the metal looks ugly, I say so.  And so now, when I tell you that I just have this feeling…well you can believe me or not.  But I do.  I have a feeling.  Perhaps now might not be the best entry point (after a multi-week rally higher), but the sentiment even here at PP about gold is utterly dismal.  Even Jim, gold champion for decades, is nowhere to be found.  (Not picking on Jim – he’s just an indicator).  Mrees talks about dusty silver he never visits, “only grandpas buy gold”, and the entire world is focused on bitcoin.  Its the future, after all.  Our gold chartists have deserted us.  Nobody comments about PM anymore.  People seem embarrassed to say they own gold.

And even though – truly – “nobody cares” among the public, gold is right around 1300.  And silver utterly failed to break below 15.50, and managed money had loaded up the boat to see if they could make that happen.  They couldn’t.  When a market fails to collapse when “nobody cares” and the shorts are pounding the hell out of it, that’s a very good sign.  When prices follow sentiment, then sentiment is right.  When prices stop following sentiment…well, that’s why I have this feeling.

Michael Belkin has an algorithm that gives him guides as to what’s low, and what’s high.  He likes silver – and silver miners here.  Just doing the math, I have to agree with him.  Here’s a KWN interview (try to ignore Eric’s tinfoil hat bit at the start) to this effect:

Full disclosure: I am long both silver and silver miners here.