I didn’t see any proximate cause for the metals rally on Friday; traders just started to buy just before 9 am, and mostly didn’t stop until the afternoon. Is it possible that the large drop in bitcoin prices helped? Who knows. I’m not seeing any strong correlation either way.

This week was a clearly bullish one from the viewpoint of the metals sector map. Juniors led seniors, silver led gold, and the miners led the metals, with the junior miners at the top of the heap. Special mention goes to copper, which is a penny away from making a high that dates back to 2014. Most items are back above the 50 MA, and many have even crossed back above the 200 MA. After the recent rally, all elements are back in positive territory over the last 52 weeks, even rented-mule platinum.

Gold’s weekly and monthly forecasters remain in a downtrend.

The March rate-increase chances closed the week at 56%. 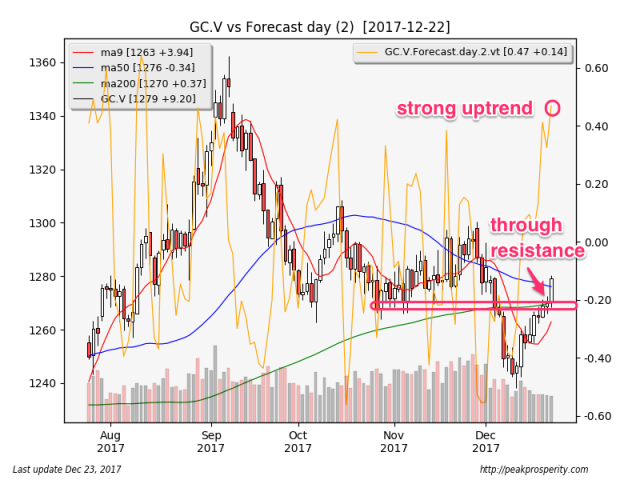 Silver rose +0.34 [+2.14%] to 16.45 on the week, with most of the gains happening on Friday. Silver was fairly lackluster on the other 4 days, looking as though it might actually reverse on Thursday, but Friday’s strong move eliminated that concern.   Silver is coming up on 16.60 resistance; gold has already plowed through its resistance area, and now its silver’s turn.  Forecaster ended the week at +0.35 which is a reasonably strong uptrend. 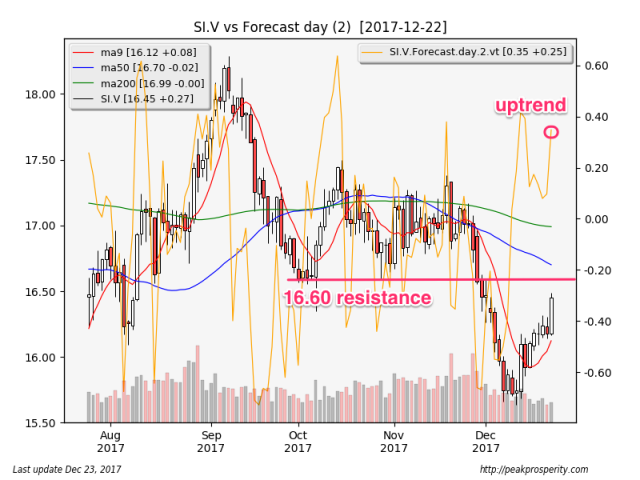 Miners did fairly well all week, managing to rise even on day when silver was looking iffy. Both GDX and GDXJ have managed to close back above both the 50 and 200 MA lines, with GDXJ executing a clear breakout above the November high. When the juniors lead like this, it is good news for PM overall. Having said all that – the XAU forecaster retreated on Friday, and closed the week at just +0.06, which suggests that the miner rally might be running out of steam. The XAU RSI-7 is currently at 83, which is definitely overbought.

On the weekly charts, XAU issued a buy signal, and while the monthly forecaster is improving (+0.06 to -0.05), it remains in a downtrend.

The GDX:$GOLD ratio rose +3.18%, and the GDXJ:GDX ratio climbed +1.61%. That’s all quite bullish. SIL:GDX fell -1.38%, which says that the silver miners are still working at putting in a low. In fact, SIL:GDX fell this whole week. 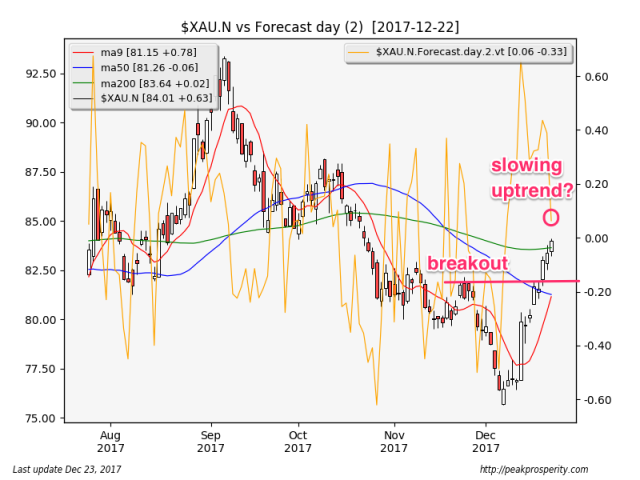 The buck fell -0.56 [-0.59%] to 92.92, making a new low. In spite of the separatist win in Catalonia, which should theoretically have helped tank the Euro, the buck just can’t find many buyers right now. Certainly the tax reform passage seemed dollar negative. Perhaps the answer to the puzzle lies in the bond market – perhaps the money fleeing the bond market was foreign money front-running January’s 30 billion dollar “Fed balance sheet normalization” program. The buck ended the week with a whimper – a short black/NR7 candle because of a very narrow trading range. The daily forecaster is unsure as to direction, ending the week at -0.06. Weekly buck forecaster is down (-0.21), while the interim Dec monthly is up (+0.26). On the monthly chart, the buck seems to show strong support at 92.50, at least on a monthly closing basis anyway.

SPX rose +7.53 [+0.28%] to 2683.34. After breaking higher on Monday, SPX slid slowly downhill all week. All the juice from the tax cut lemon has already been squeezed out. Forecaster isn’t happy, ending the week at -0.47, in spite of the new high. From what I could tell, the forecaster didn’t like what was happening with the utilities, or long rates. It will be interesting if this (presumably historical relationship) proves out in the coming weeks.

Weekly and monthly charts both show SPX remains in an uptrend.

Although SPX didn’t move much, there was a big rotation – apparently out of utilities (which were crushed) and into energy, which broke out to new highs. It seems that the market is betting that the oil glut is coming to an end sooner rather than later. The XLU:XLE ratio topped out in August – it was a 10 year high. If we bet on a reversion to the mean, XLU:XLE has another 20-30% drop before it gets back to its usual range. That won’t be any fun at all if you own utilities.

TLT was hammered this week, dropping -2.79% with all the losses coming Monday-Wednesday. TLT is in a downtrend, but the strong back and forth moves in the long bond means the trend-following forecaster isn’t providing us any useful signals. TY looks a lot less volatile, but it too dropped -0.75% on the week. The TY forecaster (-0.73) remains in a downtrend, as are the weekly and monthly forecasters.

JNK fell -0.19%, taking a large loss on Tuesday but then bouncing back to end the week, eventually printing a swing low on Friday. Forecaster issued a buy signal Friday. As with TLT, there is a lot of back and forth on the daily chart. The weekly and monthly BAA yield charts both remain in downtrends; that’s a JNK uptrend, because when yields go up, bond prices go down. No scary credit signals yet from JNK.

Crude rose +0.98 [+1.71%] to 58.36, moving steadily higher, rising 4 days out of 5. Forecaster issued a buy signal on Monday, but Friday it saw something it didn’t like, falling -0.12 to +0.08. Candle print was just a short white bullish continuation, so no problems there. EIA report was bullish (crude -6.5m, gasoline +1.2m, distillates +0.8m) and the market had a mildly positive reaction to that release. The big news from the oil industry came from Total, which announced it would start drilling offshore in Brazil, where (“technical”) costs were estimated to be below $20/bbl. At least – that’s the only news I saw that I felt might have been responsible for the heavy buying in energy equities. Certainly the moves in oil prices were just slow and steady rather than explosive. Weekly forecaster was at +0.10, while the monthly is still forecasting a top, at -0.23. Historically, crude has done poorly when it is at or near yearly highs, which is where it is right now.

Then again, it also looks poised to break out.  I think it could go either way. 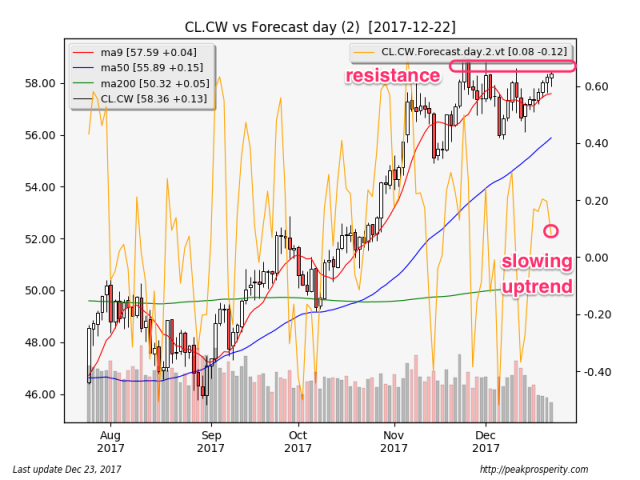 * Bullion Vault gold (https://www.bullionvault.com/gold_market.do#!/orderboard) is at a slight discount for gold and a slight premium for silver.

In gold, the changes were small: commercial net position fell 8.7k contracts, with 9.2 shorts added, and 496 longs added also.  Commercial longs are at a 2-year high, which could be a sign of a low.  Managed money net position rose by 5k, with 11.5k shorts closed, as well as 6.5k longs sold.  The current managed money long position is also at multi-year lows, which could support a bullish reversal – pretty much what we’re seeing now.  Managed money longs have (largely) all been rinsed out at this point, but there are still a lot of commercial shorts still in place.

In silver, the changes were proportionally larger: the commercial net position rose by 6.2k, which is a high going back to mid-2015.  There were 4.9k shorts covered, as well as 1.3k longs purchased.  This is a multi-year high for silver longs too.  Managed money net dropped 8.7k, which is a multi-year net low position for managed money dating back to mid-2015 also.  Managed money added 8k shorts, and sold 577 longs.  While the shorts aren’t quite a record, the low level of longs dates back to late 2015.

It feels likely that we’ve got lows in both metals – even if the commercials have a few more shorts in place that I’d really like to see.  The number of commercial longs is especially interesting.

On a relatively quiet pre-holiday trading week, PM followed through on last week’s rally, with the mining shares leading the sector higher. Copper had another great week, managing to end on a multi-year closing high. A falling buck helped contribute some momentum, and an overall commodity rally did its part to help PM move higher also.

The COT report turned more bullish this week; while there are a fair number of commercial shorts still in place, the recent “rinse” cycle has quite successfully convinced more than enough managed money longs to bail out to mark a low.  We’re back to mid-2015 numbers.  This clears the deck for a rally.  Managed money belatedly coming back in long will provide the fuel.

This bullish setup is just in time for the elections in Italy, while Germany struggles to form a government, while the EU mulls removing Poland’s right to vote (although any other single EU member can veto this punishment – with Hungary already volunteering that it will do so), and Catalonia having voted their separatists back into power with an astonishingly high turnout – on a weekday even.

Gold and silver might not immediately head for the stars, but I suspect it will take off relatively soon.  That’s the setup, both geopolitically, and what the technical COT report is saying too.

It probably doesn’t hurt that a bit of air has come out of the bitcoin balloon too.  All these new buyers have now been able to experience the Mr. Hyde side of bitcoin.  It’s not all Dr. Jekyll.

There’s really not much on the economic calendar for next week; Monday is Christmas, and the rest of the week looks pretty empty of economic-report excitement, and after that we’ll be in 2018.

The miners are starting to look a little bit extended. That’s something to watch.