The weekly metals sector map strongly bifurcated this week; gold led silver, and the miners did quite poorly. This lines up with the general theme of a safe haven move. Once again, gold/Euros remains at or near the top of the list. People in Europe continue to buy gold.  Copper is starting to look iffy again; its probably China-related.

Gold rose +6.53 [+0.53%] this week. Once again, gold moved mostly sideways, but managed to climb slowly higher, making new highs along the way. Gold in Euros not only made new highs, it managed to close fairly conclusively above the 200 MA. Gold remains in an uptrend in both the daily and weekly timeframes, while gold/Euros is in an uptrend in all 3 timeframes. While there has been no explosive move higher in gold, the steady climb is in some ways better – certainly the gains should be more sustainable.  This is the 4th straight week up for gold.

The December rate-increase chances plunged to 67%. The market appears to believe that the recent move lower in equities might be enough to convince the Fed to – perhaps – avoid raising rates in December.  This is a drop of 13%.

COT report shows the commercial net position plunged -15k contracts, with most of that new shorts (+11.8k) and some of it sold longs (-2.7k). Managed money net rose +11.2k contracts, with 7k shorts covered, and 4k longs added. These were minor changes in position. Position remains generally bullish; perhaps 30% of the outstanding short positions have been closed. 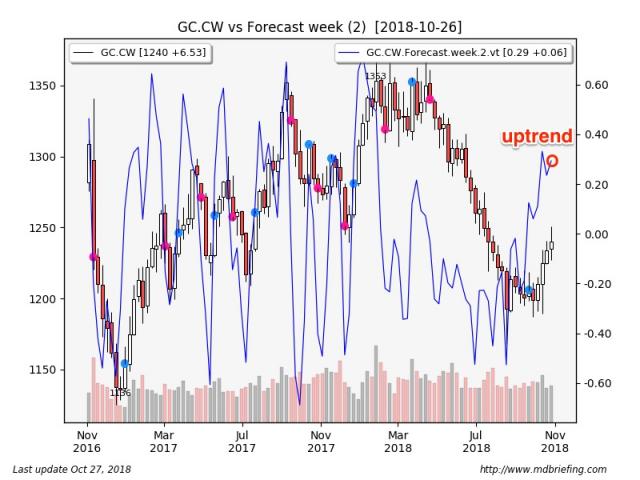 Silver rose +0.05 [+0.38%] on the week, another week of very little movement. That’s also another weekly doji candle, which was unrated. Daily forecaster issued a sell signal on Friday, but not because of any large move, and the sell signal itself wasn’t particularly ominous-looking. As if to underscore the lack of direction, weekly forecaster issued a buy. As with last week, silver remains above the 9 and 50 MA lines, but it is now in a downtrend in the daily and monthly timeframes.

COT report shows commercial net fell -8.4k contracts, mostly new shorts (7.4k) and a few sold longs (-1043). Managed money net rose by +12.4k, with much of that covered shorts (7.6k) with a bunch of new longs (+4.8k). This was a second week of some fairly decent short-covering. It didn’t seem to move prices very much at all. 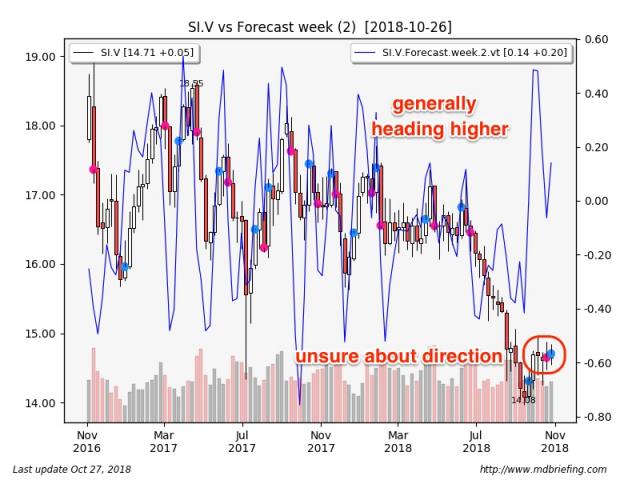 Miners had a terrible week, with most of the losses coming on Thursday. XAU plunged -7.02%, which resulted in a sell signal for both the daily and weekly forecasters, and it reversed the monthly buy signal. That leaves XAU in a downtrend in all 3 timeframes. How does this make sense with gold inching ever so steadily higher? It doesn’t. Someone is selling miners for some reason. The same thing happened during 2008; people under pressure sell things, and when equities are getting hammered, sometimes the gold miners get caught up in the fuss. Maybe this week its the same reason for the miners – I just don’t know. What I do know is, miners are dangerous to hold during an equity market plunge. 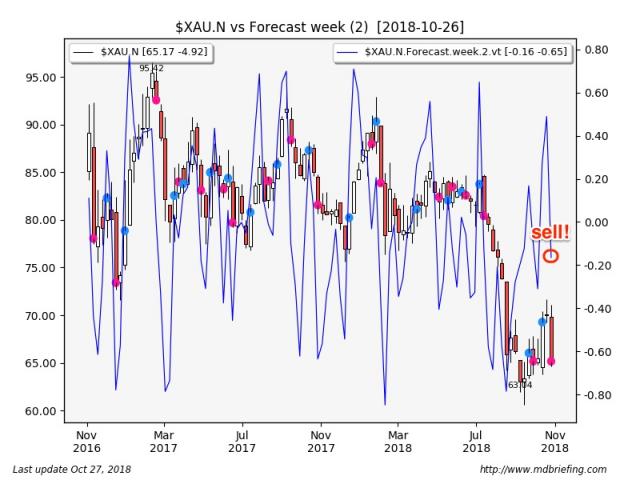 The buck rose +0.65 [+0.68%] to 95.91. The buck broke out to a new high, although it ended the week on a bit of a sour note. Forecasters all strengthened this week, with the buck moving more strongly into an uptrend. Buck remains in an uptrend in all 3 timeframes.  The buck looks as though it is getting ready to break out to higher levels in the next week or two. 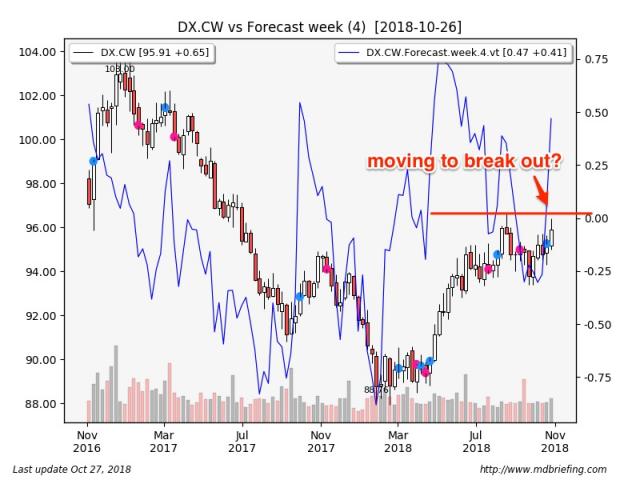 Armstrong’s computer is suggesting that equity prices will move lower next week: both DJI and SPX violated a significant weekly-chart support level. His opinion is that the election uncertainty is driving equity prices lower.

The sector map shows energy and industrials did worst, while REITs, staples, and utilities did best. That’s a bearish sector map.  Wow, that’s quite a sea of red.  Most things have dropped through the 200 MA – as has SPX itself.  Several sectors have even executed “death crosses”: financials, homebuilders, materials.

Globally, the US was the second-worst performer.

Gold rallied in most of the major currencies, doing best in GBP.  Hello BRExit! 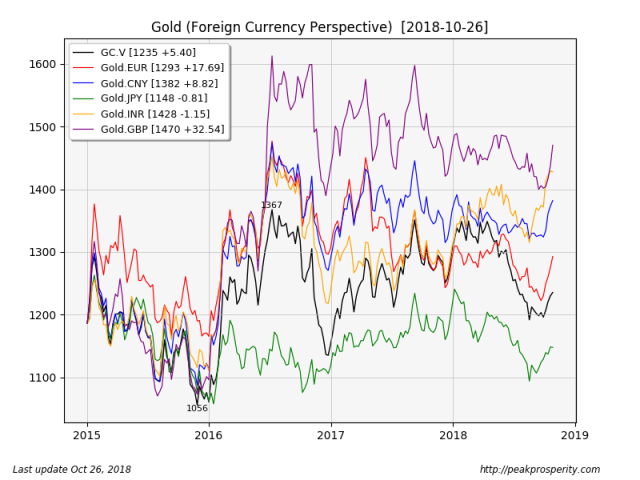 TLT rallied +1.13%, moved higher in fits and starts, but ended the week on a high. TY was up almost as much, +0.91%, ending the week just below the 50 MA. While TY remains in a downtrend in both the weekly and monthly timeframes, it is quite close to a buy signal on the weekly. I expect a buy signal on the TY weekly if equities continue moving lower next week. The 10-year yield rose +5.7 bp to 3.20%.

JNK fell -0.79%, an unpleasant week for sure, but by no means a disaster. JNK made a new low and for the most part tracked the equity market – although losses in equities were 5 times larger. JNK ended the week in a clear downtrend.

After the shellacking in equities this week, its worth asking, are we seeing any significant moves in any of the junky bond fear gauges? Executive summary: no. BAA rates ended up not moving at all this week, while AAA rates increased 2 bp. This tells us that the BAA.AAA ratio is largely unchanged. When the credit market is in a panic, BAA rates scream higher, while AAA rates drop. We’re just not seeing that right now at all. Junky credit is (largely) giving a big ho-hum to the equity market sell-off. 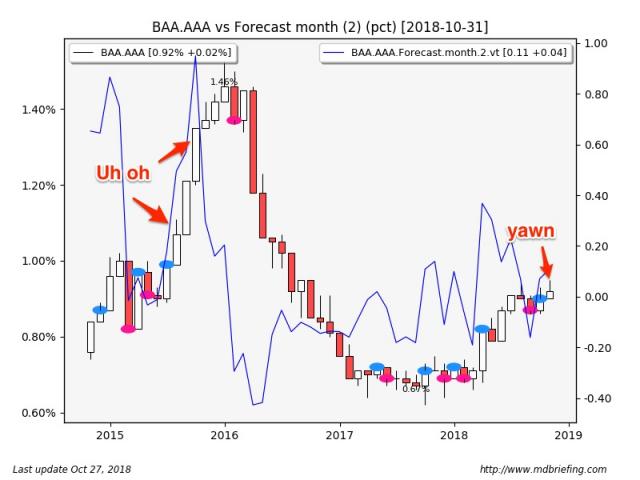 Crude fell -1.84 [-2.64%] to 67.73, with all of the damage happening on Tuesday. Crude did bounce back during the latter part of the week, but if the recent pattern holds (a smash on Tuesday or Wednesday, followed by a dead cat bounce on Thu/Fri/Mon) then we might see crude down around the 64 level by mid-week next week. Crude is – to a degree – following the equity market lower. With my conspiracy hat on, I might suspect Trump of hammering down crude prices in advance of the election. But who knows. The EIA did issue a bearish report (crude: +6.8, gasoline: -4.3, distillates: -2.3) but it did not seem to drive prices much at all. While last week I thought the Khashoggi murder might have caused the disturbance in the oil markets, I’m less sure about it this week. I’m really casting around because I’m not really seeing any “fundamental” drivers for oil prices right now at all. Things are just behaving a bit oddly, that’s my sense anyway. 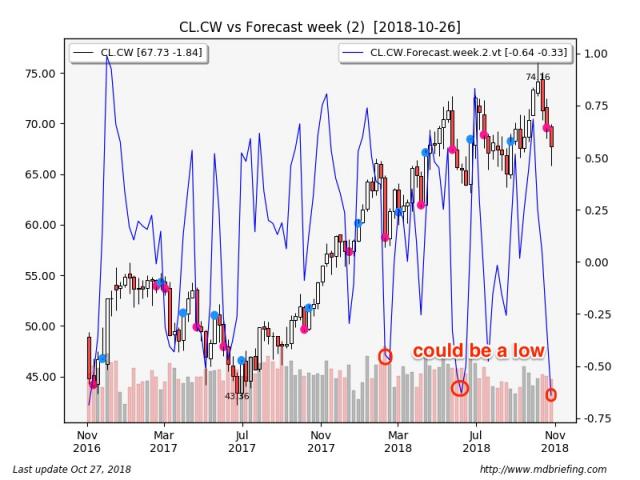 * Bullion Vault gold (https://www.bul lionvault.com/gold_market.do#!/orderboard) shows a $6 premium for gold and a 5c premium for silver.

After a respite last week, once again equities led the party – straight downhill. While the pace of the equity drop isn’t accelerating, the volume is definitely increasing. One would think from this move lower that the economy is just about to tip over into recession, but that’s just not the case, at least not with any indicators I watch anyway. Gold and bonds are both signaling a safe haven move, although bonds aren’t looking as strong as they should. Armstrong thinks that’s an effect of the cycle – a sovereign debt default cycle.  And, our junky bond “coal mine canary” isn’t showing any signs of tipping over.  In fact, its hardly moving.  The credit markets are telling us that – in the core at least, all is well.

Big bar gold premiums on gold remain low, silver’s premium remains moderate, and ETF discounts increased.  PSLV at 4.55% – that’s quite a discount.  There is no shortage of gold at these prices – at least according to my numbers anyway.

The COT report shows that managed money is continuing to cover, but the pace remains relatively sedate. Perhaps 1/3 of the managed money short position have been covered at this point.  There have been just a couple of short-covering events, with only one day of any real excitement – on that $30 rally a few weeks back.

Looking forward near term, I think the serious issues are Italy’s budget (will they be fined, 3 weeks from now by their “friends” at the EU for their horrible, unprecedented crime of a 2.4% GDP deficit?), the future of the US-Saudi relationship especially in the context of the Iran squeeze play, and the US midterm elections, which conclude 10 days from now.

Currently, polls suggest the Democrats will take over the House.  I believe that capital is fleeing risk in advance of this event.  However if the polls are wrong, as they were in 2016, the snap-back in equity prices could be astonishingly strong.  At least, that’s what I’m looking at anyways.  Gold may or may not be hit hard, depending on what happens to Italy, and there’s the wildcard of Merkel losing power, which if it happened would be strongly negative for the Euro. Capital really seems to like having the Germans in control. No historical irony there at all  I think the major bid for gold right now comes from across the pond – buying insurance against just such an event.