The weekly metals sector map turned 2/3 green; every item is back above both the 9 and 50 MA lines, although silver moved above its 50 by a very slim margin on Friday. Gold is leading silver, which is generally a mark of a safe haven move, but the miners are leading metal, which is bullish, with juniors leading seniors – also bullish. It appears that PM may have awakened from its multi-month slumber.

Gold rose +14.61 [+1.20%] this week. Trading range on the week was very wide; there was a plunge on Monday, and then the big move on Thursday, when for some reason (probably tied to the plunging equity market) gold shot up almost $30 in spite of what appeared to be heavy official intervention, breaking out above its recent trading range. Gold’s forecaster issued a daily buy signal on Thursday, and that caused the weekly to issue a buy signal as well. Gold remains in a downtrend on the monthly timeframe. Gold in Euros is in an uptrend in all 3 timeframes.

COT report shows the commercial net position jumped +17k, mostly because of 12k fewer shorts, but also 5k more longs. I’m guessing all the short-covering happened on the relatively big Monday sell-off, when gold fell to 1190. This is a new record high for the commercial net position: 26k net contracts long. Commercials are almost never net long, but they are right now. Managed money net fell by -30k, a massive drop, mostly because of 18k longs dumped but also because of 11k new shorts. A mirror image of the commercial position, managed money is at the most extreme net short position in history. 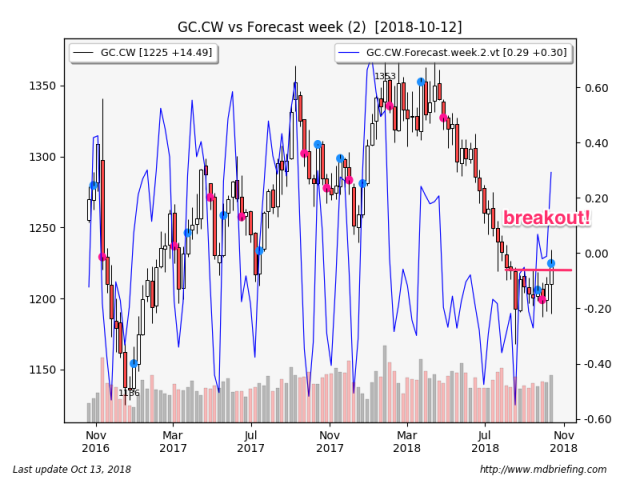 Silver fell -0.07 [-0.48%] on the week, clearly underperforming gold. While silver did manage to crawl back above its 50 MA by end of week, it did so only because the 50 fell faster than the price of silver this week. Still, silver forecaster issued a buy signal on Thursday; that puts silver in an uptrend in both the daily and weekly timeframes. That said, silver weekly forecaster dropped hard, and just barely avoided issuing a sell signal. Contrast with gold’s breakout; this is the mark of a safe haven move. 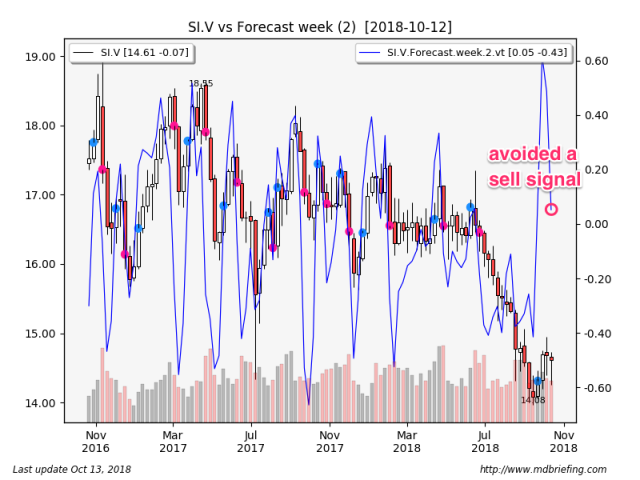 Miners did best this week, with XAU rising +5.79%. The big day for the miners was Thursday, where all of the miner elements (XAU, GDX, GDXJ) moved up more than 6%. XAU is now well above its recent trading range as well as the 50 MA. The move caused the weekly forecaster to issue a buy signal, which leaves XAU in an uptrend in both the daily and weekly timeframes. 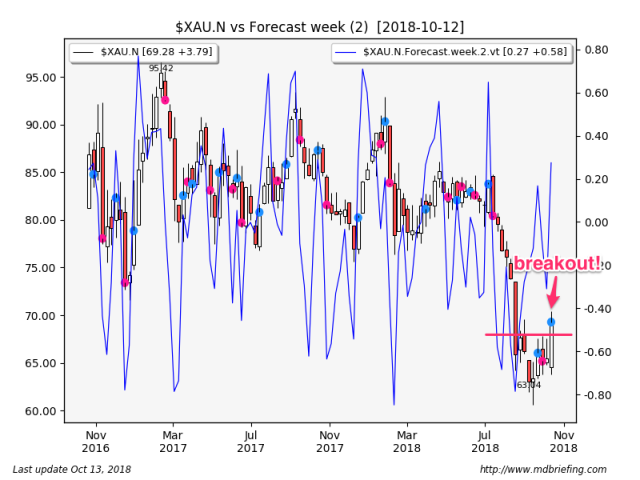 The buck fell -0.43 [-0.45%] to 94.78, falling 3 days out of 5. Forecaster issued a sell signal on Wednesday, moving DX into a downtrend in both daily and weekly timeframes. Monthly remains in an uptrend, as it has for the past 7 months.

World currency markets were split; CNY fell -0.77%, while EUR rose +0.39% along with GBP +0.26%. Most of the emerging markets got some relief for a change; money was more or less fleeing US assets this week due to the sell-off in the US equity market, and so the emerging market currency pairs rallied vs USD, including even the Turkish Lira and Argentine Peso. 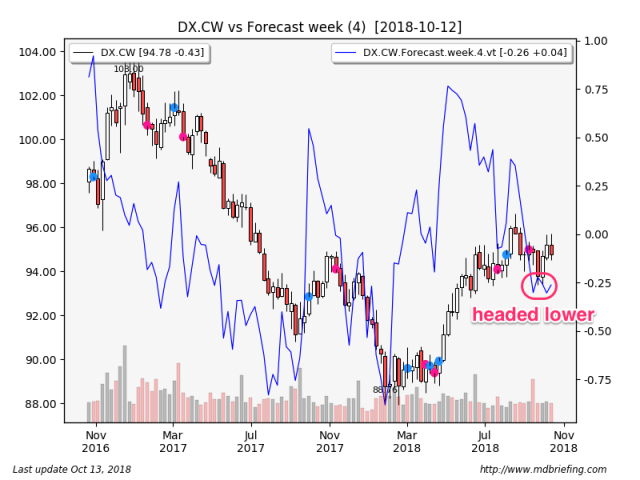 SPX was hit hard, dropping -118.44 [-4.10%] to 2767.13. Most of the damage happened on Wednesday and Thursday. Why the big move this week? Big picture: equities were an insect looking for a windshield. More tactically, I believe it had to do with concern over China infecting US computer products with hardware malware that basically turns over control of the box to the Chinese Army; Bloomberg released a second article with more evidence confirming the infections on Wednesday morning. This seemed to cause a sell-off in the tech sector, which dragged everything else down with it. Also contributing was Fed Chairman Powell, who explained in an interview that same day that the US short term rates were “far from neutral” suggesting we had a large number of rate increases ahead of us. Rate increases slow economies, and even though GDP Now forecasts a 4.2% number for the current quarter, the market doesn’t like to hear that there will be rate increases as far as the eye can see.

Friday’s candle was not rated – it was an inside day. Forecasters all became more bearish; daily is showing a strong downtrend – the bounce on Friday didn’t help matters much at all – while the weekly issued a sell signal this week, dropping -0.55 to -0.51. Monthly fell too, but Friday’s bounce was enough to pull it back from the brink. So right now, we’re in a downtrend in the daily and weekly timeframes, with the monthly looking iffy, but still in an uptrend. SPX ended the week right at its 200 MA.

Globally, Latin America equities did best, while the US came in dead last.

Gold rallied in most currencies, doing best in CNY. 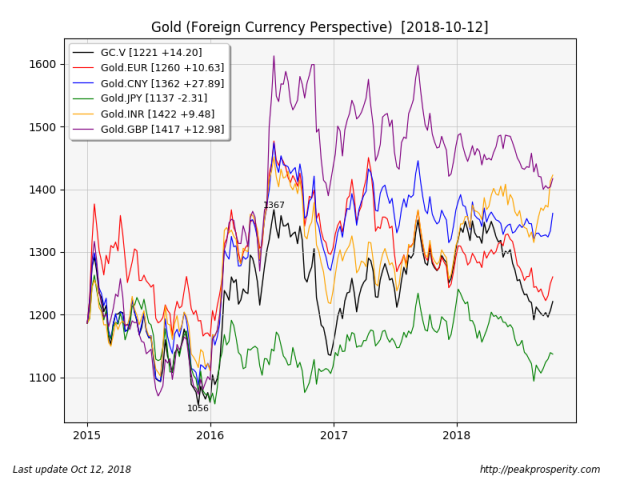 TLT rose +1.27%, managing to move higher, but clearly struggling to do so. My sense is, there is a lot of selling of US treasury bonds happening right now, perhaps by emerging market nations or by China itself. Last week’s breakout above the previous high of 3.12% probably got some people worried, and so this week (I’m guessing) they unloaded some of their longer-dated inventory. That’s why bonds hardly rallied at all even in the face of some moderately hair-raising moves lower in risk assets. TY rose +0.46%, which was enough for a buy signal on the daily, but not nearly enough for the weekly. TY remains in a downtrend in weekly and monthly timeframes. If the equity market recovers, I’d expect US treasury bonds to make new lows. 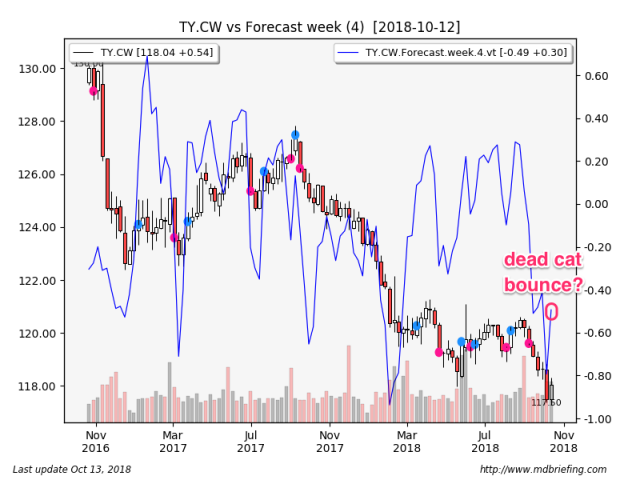 JNK fell -0.14%, plunging hard on Wednesday, but then erasing all those losses and then some on Thursday and Friday. Last week JNK did a good job predicting the drop in equities, this week it is now suggesting a rebound may be in our future. Friday’s move was impressive: up +0.51%. JNK printed a weekly takuri line candle which was a 49% bullish reversal. JNK’s daily forecaster came back from a huge deficit, ending the week at -0.09, which is almost a buy signal. Traders are clearly still willing to buy the dip in junk debt. Do we imagine the Plunge Protection Team is hoovering up shares of JNK? I’m guessing not. 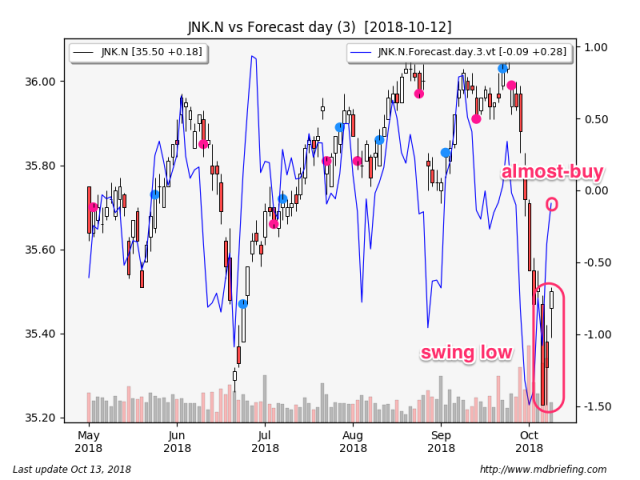 Crude fell -2.87 [-3.87%] to 71.29 this week, with all of the losses coming Wednesday and Thursday, with a bounce on Friday. It looked to me as though crude was fairly closely aligned with the movements in the equity market. While the EIA report was bearish (crude: +6m, gasoline: +1m, distillates: -2.7m), I think the stronger influence was plunging equity prices. I think that because crude prices actually bounced a bit following the EIA report.

Crude remains in a downtrend in the daily timeframe, but the weekly and monthly remain in uptrends. That said, the uptrends are definitely showing signs of fatigue, and a drop next week would almost certainly result in a sell signal, possibly in both timeframes. The weekly candle print was an unpleasant-looking swing high (61% bearish reversal), which suggests that momentum for crude may have shifted to the downside. However regardless of all the technical stuff, I think crude’s near-term future is probably tied to where equity prices go next. 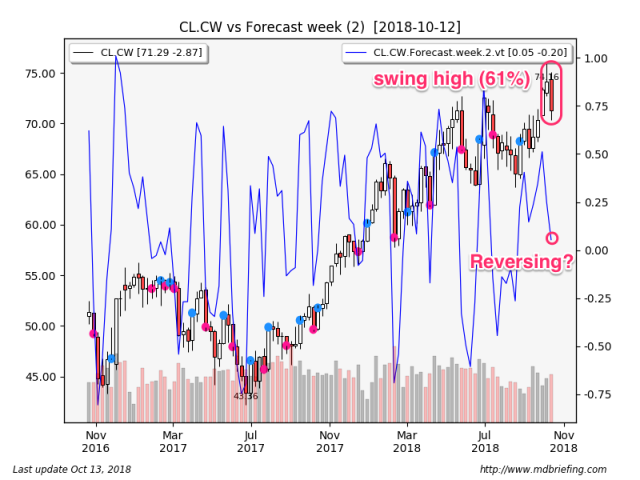 * Bullion Vault gold (https://www.bul lionvault.com/gold_market.do#!/orderboard) shows a $4 discount for gold and a 15c premium for silver.

This week was all about the plunge in US equity prices, which more or less fell off a cliff on Wednesday and Thursday. Was it about China infecting US computers with hardware controls? Or was it due to Powell stating US rates were “far from neutral?” It is hard to know. The likely murder of a journalist by the Saudis inside their own consulate may imperil larger geopolitical issues, talk of a meeting between Trump and Xi next month may bring some resolution to the trade dispute, and a relatively weak US treasury bond market were the most interesting things I saw. And of course there was the strong move higher in gold in response to all the fuss.

Big bar gold premiums on gold remain low, silver’s premium remains moderate, and ETF discounts were mixed. There is no shortage of gold at these prices – at least according to my numbers anyway.

While the US-Turkey-Saudi triangle is interesting, the changes in US-China relations will probably have a larger impact overall. When I look across the broad swath of news stories over the last several weeks and months, I can see a pattern of hardening against China. I do not think the Bloomberg article occurred in a vacuum; I believe there was cooperation from within the administration on this story. Likewise, there was the extradition from Belgium of a Chinese operative who allegedly stole IP from GE, pushback on “China debt traps” in emerging market countries (Pakistan, for one), reporting on “Five Eyes” informal intelligence sharing on China, all of this is starting to form a pattern. The perception of China is changing: from “our friendly (and cheap) workshop overseas” to something closer to “Russia during the cold war.” We aren’t there yet, but that’s the direction we are heading.

Xi has the chance to stop this train, but I think time is fairly short. Do they realize the sea change happening?  This has become about more than trade at this point. China staged an effort to infect and control the US computing infrastructure. That’s what our entire economy is based on. That’s not a small thing.

But apart from major geopolitical questions like that, where will the equity market go next? I know that’s the burning question of the day.

We appear to be on the edge of an equity-market breakdown. If not for Friday’s rally, SPX monthly would have issued a sell signal – it was a close-run thing, although the odds favored a Friday rally. Looking at the daily candle patterns, Friday’s rally wasn’t all that bullish. In addition, the monthly candle patterns currently in place are quite bearish: the current swing high for monthly SPX is very highly rated – which is bearish.

On the positive side, JNK seems to have regained a bid, and I don’t think that junk debt is being manipulated. At least, I’m guessing that it isn’t. All the attention is on the big stuff – SPX, 10-year, the VIX, etc. If the bid under JNK continues, that suggests the “buy the dip” mood remains intact. Here’s a thought: JNK is a one-day lookahead “tell”, which suggests we see a bounce on Monday, assuming no market-moving news occurs over the weekend.

Here’s the currently monthly SPX. Note: its not valid until end of month. 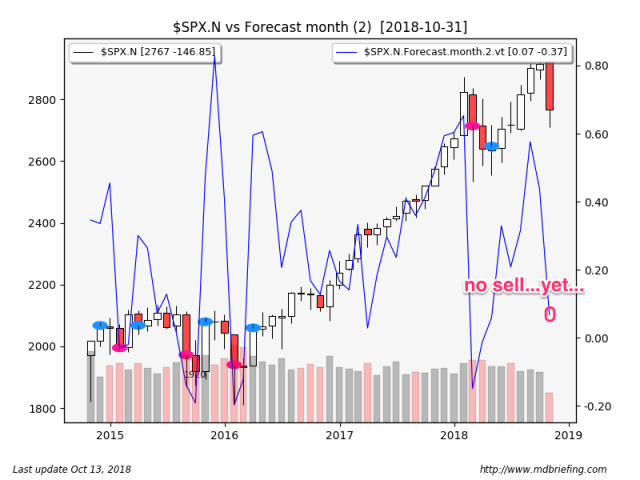 Once again, there are lots of moving parts. US equities, China relations, Turkey & Saudi Arabia, Italy and its budget, and BRExit, which I don’t think is a black swan, but will affect the EU if it goes wrong.

One last thing.  I’m not seeing any signs of a US recession in any of my indicators.  INDPRO and PPIACO are both still solid.  Only fly in the ointment: MSPUS (median-home sale price) is declining.  So the housing market (relative to wages) has tipped over, but the rest is still just fine.  In addition, the baseline recession predictor also looks fine.  My models look out a couple of months, so this correction we saw this week wasn’t macroeconomics-driven, its about something else.

With all that said, we did learn one thing this week for sure: gold remains a safe haven. If things go badly, money will flow into gold.