From the PM sector map viewpoint, the week was mostly bullish. Copper was the sole item that fell, dipping below its 9 MA on Friday. Almost all items are above their 200 MA lines, with silver miners being the exception. While platinum was the surprise winner, silver led gold, juniors led seniors, but the miners overall look relatively weak, coming in near the bottom of the pack. In spite of the map itself being almost all green, the miners at the bottom are a bearish sign.

Gold rose +15.20 [+1.16%], moving higher on two out of four days. The pair of red candles this week are signs of selling pressure in gold; the spinning top candle on Friday was a bullish continuation, but the forecaster dropped to +0.06. A red candle Monday probably means a sell signal.

Gold is now in an uptrend on both the weekly and the monthly timeframes.

The March rate-increase chances closed the week at 67%, up 11% over last week. That was probably due to the somewhat hawkish-sounding commentary from the FOMC minutes. 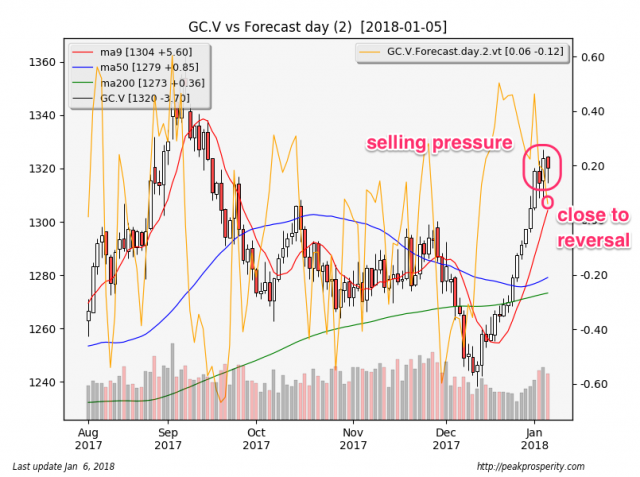 Silver rose +0.28 [+1.62%] to 17.26 on the week, slightly better than gold, but running into resistance near the previous high 17.35. Candle print on Friday was a doji, which was a bullish continuation. Forecaster ended the week at +0.09, which is just slightly above stall speed – a bit better than gold, but not much. 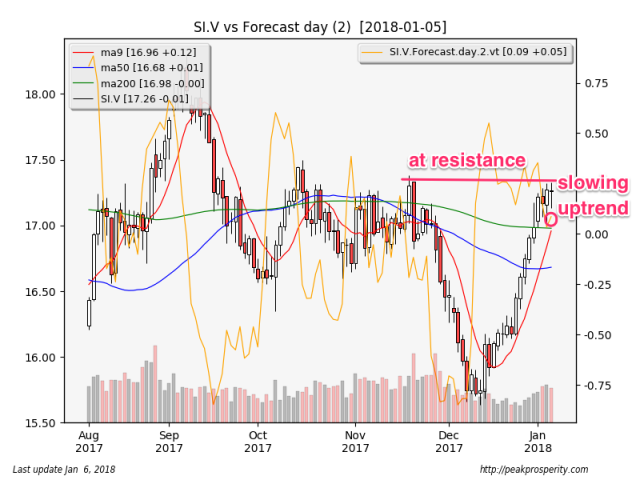 Miners were weak again this week, with one strong rally day on Tuesday followed by three days chopping sideways. GDX printed a bearish harami, with a 57% chance of marking the top, while GDXJ’s bearish harami was only a 32% chance. XAU forecaster issued a sell signal on Friday, ending the week at -0.15. Is this just another “rest” phase before miners jump to new highs, or does this mark the near term high?

On the weekly charts, XAU remains in an uptrend (+0.21), and while the monthly forecaster remains in a downtrend (-0.10). 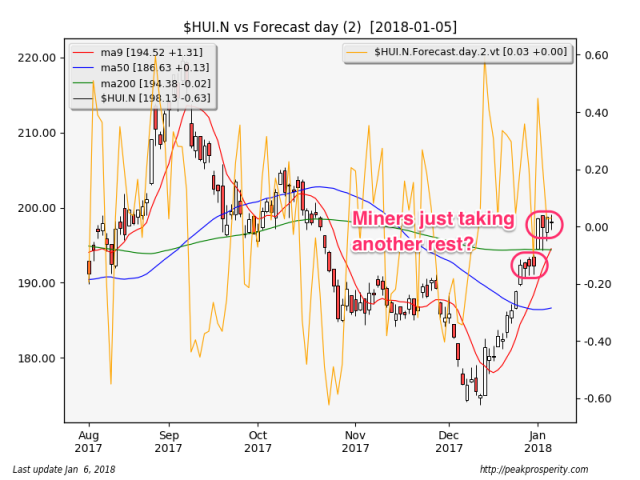 The buck fell -0.18 [-0.20%] to 91.64, making a new low on Tuesday and then chopping sideways for the remainder of the week. The buck got a bit of a boost on Wednesday, but it is still uncomfortably close to the lows. The spinning top on Friday was a bearish continuation; the forecaster has moved up off the lows, but is still quite bearish at -0.53. Buck remains in a downtrend.

Weekly forecaster is also in a downtrend (-0.09) but it has improved somewhat, as is the monthly forecaster (-0.25).  The monthly chart looks especially concerning – there’s a lot of air below the current price level.  If 91 support fails, the next stop is down around 80.  Gold would definitely scream higher if the buck went down that far – the commercials would be hard-pressed to keep a lid on things if that happened. 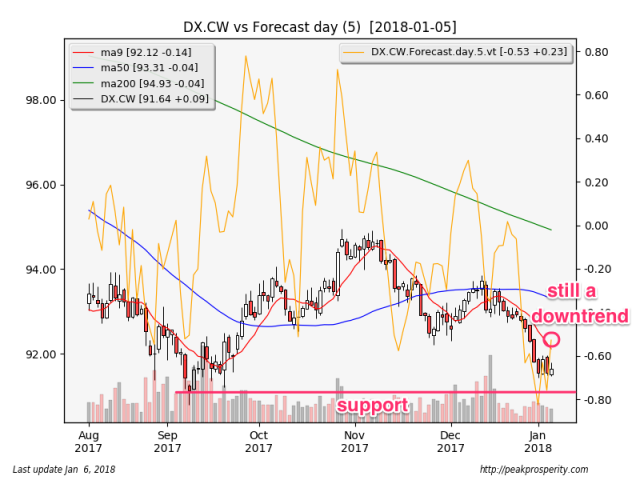 And here’s that monthly chart I was talking about.  We’re quite close to a serious dollar breakdown. 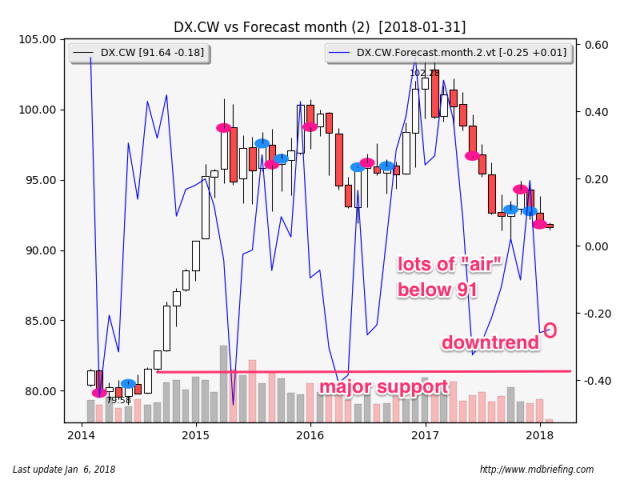 Sector map shows money flowing into commodity producers (energy, and basic materials) while money continues to flee yield (REITs, utilities). That all suggests inflation is coming.  Check out all the “red” in the high yielding sectors.

Gold rallied in all currencies, rising +17.28 in XDR. After moving the chart’s starting position forward a year, I notice that the GBP and JPY have diverged significantly from the rest of the group starting in about 2016. JPY has strengthened, while GBP has weakened.  Gold is a great denominator to assess relative currency performance. 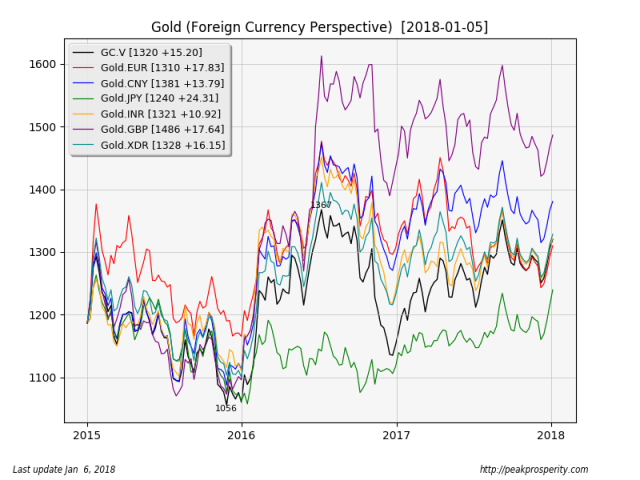 TLT fell -0.91% this week, losing about half of last week’s rally. The back and forth chop is fairly intense, but take a step back and it appears that bonds are heading lower in fits and starts. TY is much calmer; it issued a sell signal on Tuesday, fell 3 days out of 4, and made a new low. It is right at support, and it doesn’t look as though support will hold. I say that because of the strong selling going on in the utility space also.

JNK shot up +0.84%, with most of the move coming on Wednesday. JNK likes rising commodity prices, I think – in this way its more of a commodity creature than a bond. Risk on.

CRB fell -0.22%, taking a rest after last week’s sharp move higher. 3 of 5 sectors fell, led by livestock (-1.25%). Industrial metals took a break after two very strong weeks. Copper is down 4 days out of 5, and its forecaster issued a sell signal on Friday. Commodity rally might be taking a break.

Crude rose +1.48 [+2.46%] to 61.58, breaking convincingly above 60 on Wednesday and then chopping sideways for the remainder of the week. The rally on Wednesday wasn’t about the EIA report – which looked relatively bearish to me (crude -7.4m, gasoline +4.8m, distillates +8.9m). Maybe its Iranian protesters. Who knows. But the break above 60 sure got the energy equities all excited. North American rig counts rose 33; US rigs dropped 5, while Canadian rigs jumped 38.

In gold, the commercial net position fell 28k contracts, which is a moderate drop. Almost all were new shorts (27.7k) but a few longs (353) were sold also.  Its important to remember that the COT report didn’t cover the last 3 days – the huge jump in gold open interest suggests that the commercials probably spent the rest of the week going heavily short. The commercial shorts are building towards a COT top in the next few weeks. Managed money net rose by 40.4k, with all of it new long buying (40.7k) with a token number shorts (252) added in. The gold rally was all about heavy buying by managed money.

In silver, the commercial net fell by -16.5k; the swing between COT high and low points is about 60k contracts, so that’s a decent-sized (25%) move. Largely it was new shorts (9.9k) with some longs sold (6.5k) for good measure. Managed money net rose by 23k; mostly short covering (17.2k) with some long buying (5.8k) added in too. Managed money shorts are about 1/3 gone.  That suggests we get 2 more weeks of silver rally – assuming we don’t correct here.

The overall commodity rally took a bit of a break this week, although commodity-related equities shot higher; it appears that commodity equities might be a new investment theme for 2018. “Stuff with a yield” such as bonds and utilities continued moving lower. The theme remains: inflation is coming, and the FOMC minutes release just seemed to underscore that notion, as did the Nonfarm Payrolls report which showed average hourly earnings up 3.6% annualized. While the buck edged lower, it does not seem ready to collapse just yet.

Gold and silver big bar shortage indicators are showing no sign of shortage; premiums on big-bar gold and silver are normal, GLD tonnage fell, and ETF discounts fell too.

The gold COT report is showing a relatively rapid buildup in commercial shorts; this week’s rally in gold was driven by managed money going long – and the increase in open interest was quite substantial: 187 tons of paper gold created, 42 tons of actual gold mined. That certainly helped cap the rally. Silver’s increase wasn’t nearly as substantial; perhaps its another 3 weeks to mark a COT top for silver. Silver’s rally this week was mostly managed money covering short.

There’s not much new out of the news flow right now. Germany is still in the process of forming a government 100 days after the 2016 election, Italy’s elections are 8 weeks away, in the US “collusion” is turning into “obstruction of justice” (which would definitely result in a “second-place” award for Mueller, if that’s the best he can do for the not-my-president group) – so far the gray swans are in a holding pattern.