Last week, the PM sector map was pointing at a correction. This week, 3 items remain below their 9 MA lines, which is troublesome, but gold, silver, and the miners moved higher. The junior miners look quite weak, while senior miners did best, which looks a bit like risk off. Silver is leading gold, so that’s a positive sign. It’s a mixed bag.

Gold rose +17.50 [+1.31%], erasing last week’s swing high and breaking out – briefly – above the previous high set back in September 2017. Given that the buck plunged -1.65%, it is clear that gold’s rally to new highs was all about currency movement. Gold in Euros actually fell on the week. Gold’s forecaster ended the week at +0.16, which is still an uptrend, but a fading one. The weekly and monthly forecasters are both in strong uptrends.

The March rate-increase chances rose to 77%. 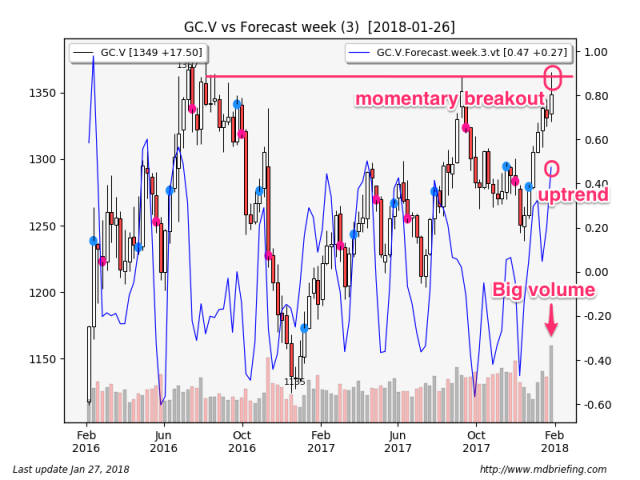 Silver rose +0.37 [+2.14%] to 17.39, with all of the gains coming on the big breakout on Wednesday. Thursday silver retraced, Friday it bounced back a bit – however the forecaster issued a sell signal on Friday, ending the week at -0.08. That said, silver is now in an uptrend in both the weekly and monthly timeframes.  Silver’s weekly issued a buy signal this week, but you can see that silver has yet to push above the September 2017 high, unlike gold which did this on Thursday. 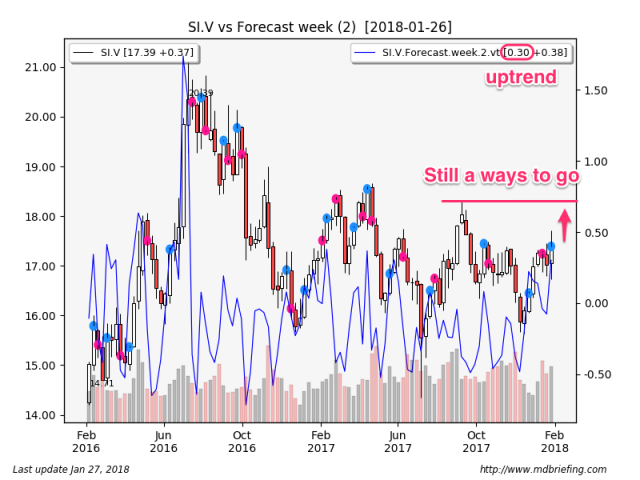 The miners moved higher, but the juniors noticeably lagged the seniors, with all the damage happening to the juniors on Thursday’s big selloff. You can see the difference by looking at the moving averages: GDX remains above its 9 MA, while GDXJ has now fallen below it. XAU forecaster issued a sell signal on Friday, ending the week at -0.05. Longer term forecasters remain split; monthly remains in a downtrend, while the weekly is in an uptrend. 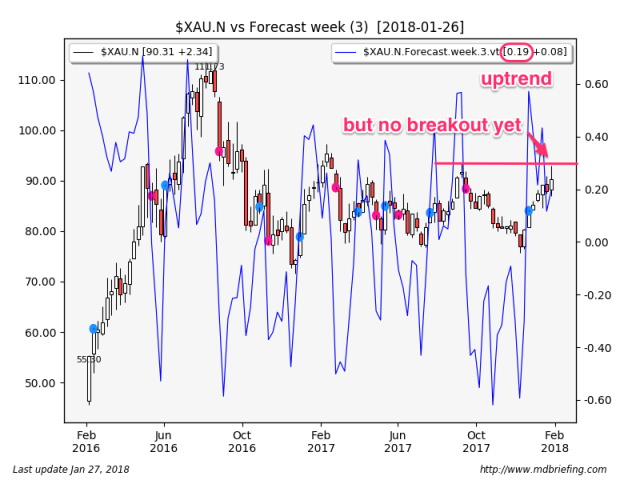 The buck had a terrible week, dropping -1.49 [-1.65%] to 88.78, falling hard through round number 90. The big move of the week came on Wednesday, when Treasury Secretary Mnuchin suggested that a weak dollar was good for US exporters – and the market inferred from this commment that the US now had an explicit weak dollar policy, and promptly dropped a full point. Thursday saw a possible reversal bar after Trump walked that comment back, but Friday didn’t confirm the reversal. The forecaster ended the week at -0.52, which remains a strong downtrend. Both weekly and monthly DX forecasters are in downtrends. 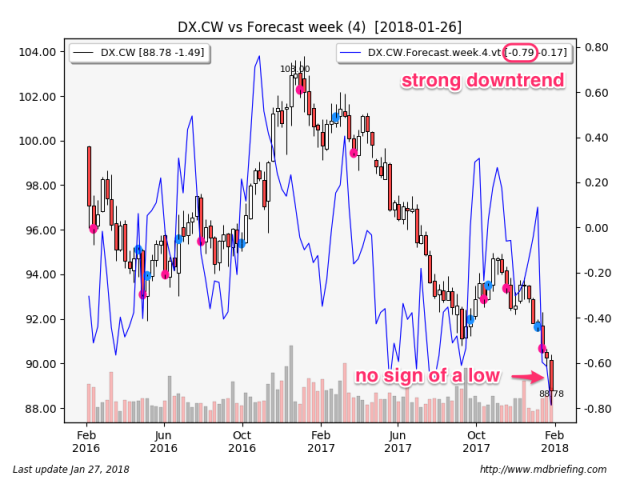 SPX rose +62.57 [+2.23%] to 2872.87, ending the week with yet another all time closing high, with half the gains coming on Friday’s big rally. The forecaster ended the week at +0.54, which is only slightly lower than where it was last week. SPX remains in a strong uptrend in all 3 timeframes.

The sector map was led by sickcare – the Republicans in the Senate have been working hard behind closed doors to “fix” the healthcare system, and the bill is about to be unveiled. I’m guessing from the rally that the market has sniffed out that “the fix” will have the same set of winners and losers we’ve seen over the past 20 years. Obamacare, Trumpcare, Republican-Senatecare, they all come up with the same answer: more money for their donors, paid for by us. https://www.reuters.com/article/usa-healthcare-stocks/u-s-healthcare-stocks-rally-as-senate-set-to-unveil-bill-idUSL1N1JI12E

Apart from my annoyance at sickcare, the sector map looked mostly bullish, with financials and discretionary doing well. Utilities were also strong; they just might have put in a low this week. 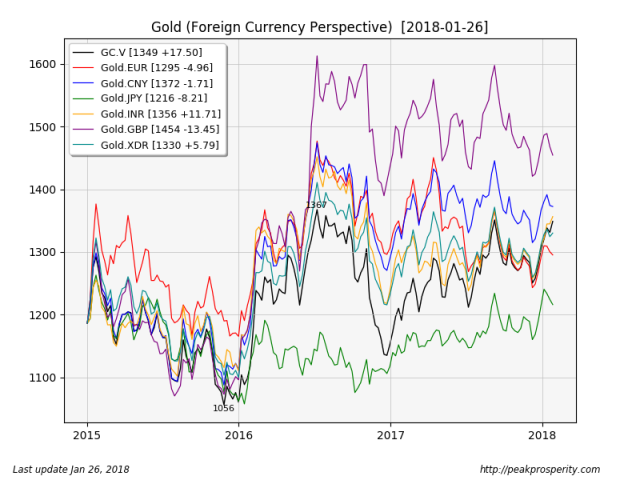 TLT rose +0.43% this week, printing a swing low on Thursday and only retreating somewhat on Friday. TLT forecaster ended the week looking quite bullish, at + 0.57, which is a strong uptrend. TY ended the week down -0.07%, and on Friday it fell -0.32%, making a new closing low. While TLT looks like it could recover, TY appears to be on the cusp of a strong move lower. TY forecaster ended the week at -0.39, an improvement over last week, but the weekly and monthly forecasters remain mired in downtrends. TY tea leaves are telling us: no bond reversal, lower prices are ahead. That suggests that XLU is probably not a buy after all.

JNK moved higher, up +0.27%, issuing a buy signal on Tuesday and then chopping sideways for the rest of the week. JNK may be in an uptrend, but it doesn’t look all that enthusiastic. The BAA weekly and monthly charts are hinting at a turn in junk debt prices; the weekly BAA chart issued a “rising rate” signal two weeks ago, and while the monthly remains in a rate-downtrend, it is suggesting a move towards higher rates as well.

Crude shot up +2.76 [+4.35%] to a new high of 66.24. Last Friday the forecaster issued a sell signal, but it reversed itself Monday, issuing a buy signal just in time for crude’s big rally. Crude broke out to new highs, closing the week at a high that dates back to 2014. Crude’s big move came on Wednesday, after the EIA report looked … well, it looks slightly bearish to me: (crude: -1.1m, gasoline +3.1m, distillates +0.6m). Market didn’t care, it shot higher. Perhaps someone has some satellite photos that tells them the true state of global oil inventories. Oil ended the week in an uptrend (+0.38), the weekly forecaster remains in an uptrend, while the monthly still thinks we’re going to sell off. Maybe I should go retrain it, because its been wrong for several months now.

* Bullion Vault gold (https://www.bullionvault.com/gold_market.do#!/orderboard) shows a slight premium for both gold and silver.

Note that the coverage period of the report did not include the big breakout on on Wednesday, or the very heavy volume day following the ECB meeting on Thursday.

In gold, the commercial net position fell 2k contracts, which is virtually no change. That was 5k new shorts, and 3k new longs. The commercial short position is equal to where it was for the last top. Managed money net rose by 8k, which was 8.6k new longs, and 626 new shorts. Managed money longs aren’t quite up to where they were last time we made a top – we are maybe 35k contracts short of that point.

Gold Manipulation Report
While there were no after hours assaults, silver was hit with a plunge on Tuesday at just after 9am.  It took silver down about 20 cents, but it managed to recover by end of day.

The buck took a big leg down this week; that helped gold, but not as much as it should have. Miners felt the pinch, and the juniors felt it most, barely managing to put in a gain for the week. Oil is not having any such difficulty; while energy equities look a bit tired, oil continues to play the part of “the little engine that could.” Bonds continue to look ill, with the 10-year treasury continuing to hover at multi-year-high yields (2.66%), looking as though they are preparing to break lower.

Gold and silver big bar shortage indicators are showing no sign of shortage; premiums on big-bar gold and silver are normal, GLD tonnage was unchanged, while ETF discounts for silver increased substantially; PSLV and CEF both took NAV hits this week. Shanghai remains in premium, although the premium shrank.

The gold COT report saw almost no change this week. The commercial shorts are in place for a COT top, but managed money longs are not. Silver is not there at all, and moved farther away from a top this week.

So the buck didn’t reverse like I thought it might, and gold did continue to rise, but gold in Euros is now actually dropping, which isn’t a great sign for our great PM rally. While gold did manage to break (briefly) above its previous high, it wasn’t strong enough to hold the gains through end of week.

Technically, the junior miners are hinting of problems ahead.

Still, apart from the Trump-dollar walkback on Thursday, the Euro has been on an unrelenting move higher dating back to the start of the commodity rally on Dec 11th. When will it stop? So far, there’s no clear sign.  Currency moves can go for quite a long time before they change direction.

The US treasury bond weakness hints at dollar weakness too. While the bond selling could be domestic (who needs bonds when SPX is rising 1-2% per week?), falling bond prices and and the falling dollar does suggest foreigners are selling US treasury securities.

Why would they sell? Maybe all they are doing is just front-running the Fed, who plans to offload a trillion or two in bonds over the next 4 years. Seems like common sense.

But they have to put those reserves somewhere.  Where might they be putting all those dollars? Well, maybe they are buying Euros – owning Euro-denominated debt doesn’t yield you very much right now, but the steady move higher in the Euro does suggest that might be happening, much to Draghi’s disgust. Maybe he should blame his friends at the other central banks for the move.

And they also might be buying gold. Certainly if I were running the PBOC, and I felt as though US treasury bonds were due for a brisk move lower, I’d swap some of those treasury bonds for gold. Very, very quietly, so as not to panic the herd. And heck, with the 0% rates in the EU, there’s no penalty at all to having a bit more of the country’s reserves in the yellow metal.

Certainly all timeframes have gold in an uptrend right now – not in Euros, of course – but for some reason gold is outperforming silver and the mining shares, and we aren’t in some sort of “safe haven” move either. Nobody is scared of anything right now, its all risk on.