The PM sector map is telling us that a correction in PM is starting; juniors are leading seniors lower, and silver is leading gold lower. Four items have dropped through their 9 MA lines, which is the first sign of trouble in any downtrend.

Gold fell -7.10 [-0.53%], with all of the damage happening on Wednesday. Gold’s forecaster issued a sell signal on Thursday, and ended the week at -0.18, which is a downtrend. Gold weekly and monthly forecasters remain in an uptrend. Gold remains above its 9 MA, which is a positive sign.  You can see the long upper shadow on Friday that shows the failed rally – this mirrors the dollar’s rebound off the lows that happened at roughly the same time.

The March rate-increase chances remains at 73%. 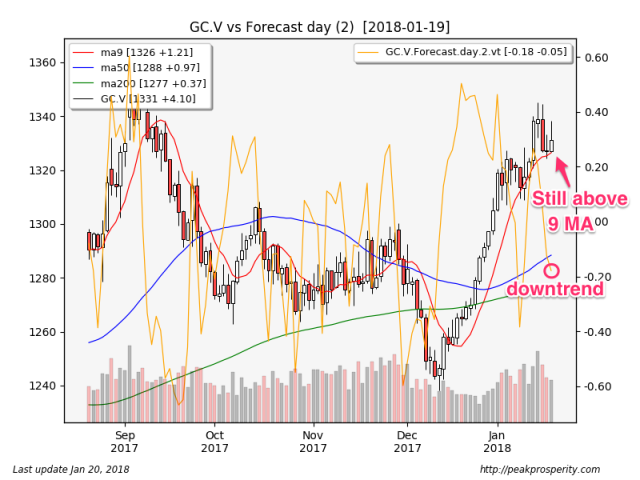 Silver fell -0.22 [-1.28%] to 17.02, correcting on Wednesday along with gold, but then recovering somewhat on Friday. Friday’s rally was enough for the forecaster to issue a buy signal, ending the week at +0.03. Looking at Friday’s price action, the buy signal comes as a bit of a surprise, but there it is. Who am I to argue with the forecaster? Silver ended the week below the 9, but remains above the 200 MA. 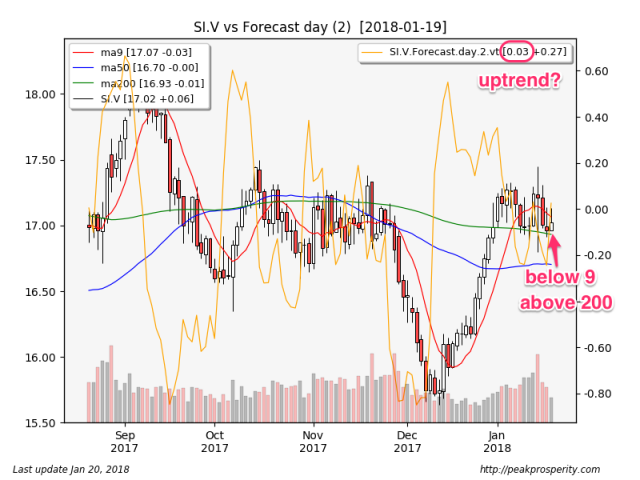 The miners were more bearish than the metals this week – Thursday was the big sell day for the mining shares, causing the forecaster to issue a sell signal on that day, ending the week at -0.11. That doesn’t look all that bad, and certainly if gold manages to recover, the miners probably will also. XAU remains above its 9 MA, which is a positive sign.

On the weekly charts, XAU remains in a (weakening) uptrend (+0.13), while the monthly forecaster remains in a downtrend (-0.21). 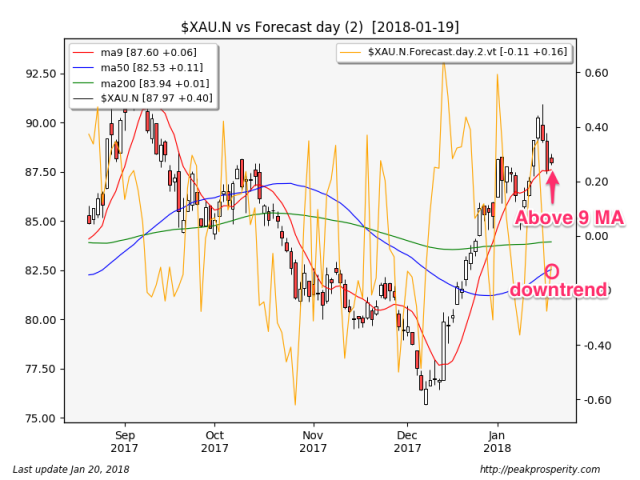 The buck fell -0.40 [-0.44%] to 90.27, making a new low on Friday to 89.86 before bouncing back. Candle print for Friday was a bullish high wave (49% bullish reversal). As of right now there definitely appear to be buyers around 90; the buck doesn’t spend much time below that level. Similarly, the Euro is finding it difficult to move above 122.50. USD forecaster ended the week at -0.44, which is an improvement over last week’s -0.66. The buck could be putting in a low here – and that would line up with the correction we are seeing starting to unfold in PM. The buck remains in a downtrend in both weekly and monthly timeframes. 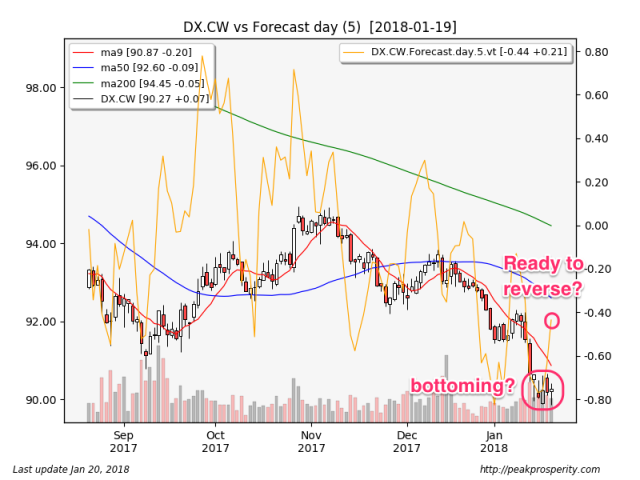 The sector map was mixed – consumer staples and sickcare led, which aren’t the usual bull market leaders, while energy trailed.  While this week’s sector map isn’t the ideal bull market configuration (i.e. tech & financials in the lead), I don’t see any signs of any sort of a correction at this point. 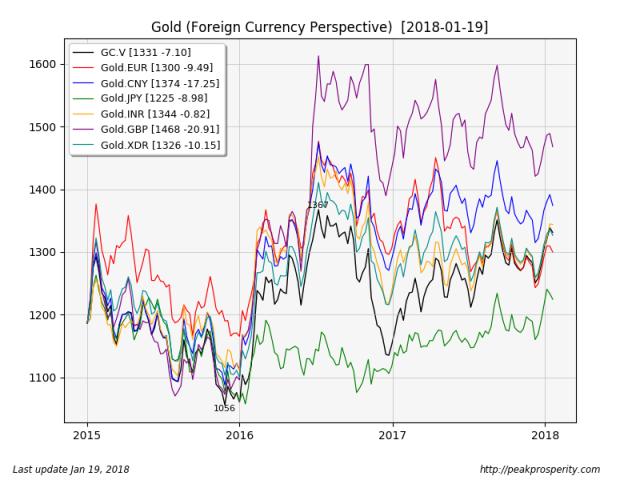 TLT fell -1.17% this week, head-faking higher on Tuesday and then dropping for the remainder of the week. TY’s chart looked worse – the rally on Tuesday was very minor, and it dropped for the next 3 days, making new lows, and finally ending the week at a 2.64% yield, which is well through the line-o-death for the 10-year. It doesn’t matter the timeframe – daily, weekly, or monthly – bonds look bad. Utilities moved lower as well this week, dropping -0.54%.  Stuff-with-a-yield continues to be sold.

JNK managed to avoid a similar fate, falling just -0.11%. JNK is moving lower, but very slowly. Perhaps it is pulled higher by the rampant risk on, and tugged lower by the falling bond prices, ending up with a rough parity. BAA bond yields, the higher-quality cousin to JNK, rose this week, which is bearish for price.

CRB fell -0.28%, not able to make any substantial progress above the 195 level which has acted as resistance for the past two years. A break above 195 will be quite bullish for commodities, but if the buck puts in a low, that will make it more difficult for commodities to move higher.

Crude fell -0.88 [-1.37%] to 63.48, dropping 3 days out of 4, and issuing a sell signal on Thursday. Forecaster ended the week at -0.14, which is a downtrend. Not even a bullish EIA report could rescue crude from the selling pressure this week (crude -6.9m, gasoline +3.6m, distillates -3.9m). There was nothing particularly bearish in the newsflow that I saw, and so when market sells off on no news (or bullish news) that’s a bearish sign. Still, the price drop was relatively minor, and buyers continued to show up to buy the dips intraday. 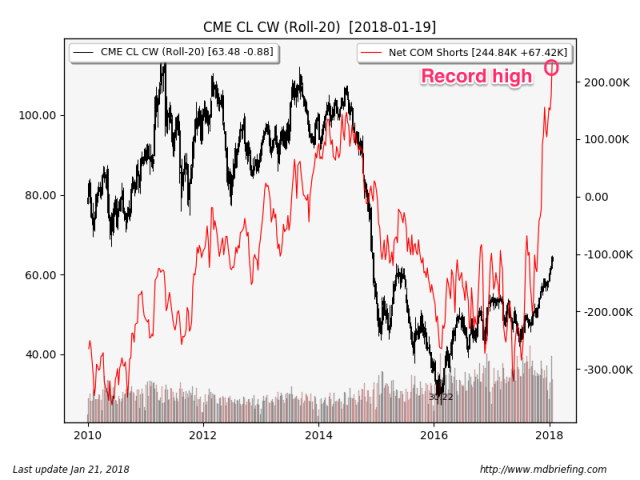 In gold, the commercial net position fell 12k contracts, which is a relatively small drop. Most of the change came from new shorts (+20k) but that was countered by a fair amount of long-buying too (+8k). The long-buying is unusual, especially at this point in the cycle. The commercial shorts have reached a level roughly consistent with a “COT top”, but those commercial longs are a little perplexing – usually by now, the commercials would have dumped them all. Managed money net rose by 5k, which was 11k new longs, but also 6k new shorts. Is managed money trying to play the wash-and-rinse cycle now? Managed money longs aren’t yet to the COT top point just yet; they need one more big week to get there.

In silver, the commercial net was basically unchanged, while the managed money net fell by 4.6k contracts – most of that from selling longs (-6.3k) but also by closing shorts (-1.6k). Silver is not yet at a COT top.

No after hours spikes this week.  There was a big spike in the middle of trading on Wednesday, however, which took silver down 36 cents in one minute, and from what I could see, ran a large number of long stops.  Does this happen in copper?  Crude?  It does not.  Silver appears to be less equal than the others, at least from the standpoint of regulators assuring a reasonably well-behaved market.  That’s because if you hose silver, that drags gold right down with it.

The buck is showing signs of – perhaps – putting in a low. Both oil and PM are giving signs they are reversing course, led by miners and oil equity prices. The two events are probably related. Bonds continued to fall, and equities kept moving higher.

The gold COT report saw very little change this week. Gold is slowly approaching a COT top, while silver is a bit further away.

My summary this week is pretty simple: if the buck reverses, that will probably cause gold a fair amount of difficulty. That’s because gold’s rally measured in Euros has been relatively feeble, and once the dropping dollar is removed from the equation, the bid underneath gold will probably weaken and the commercials will have their way with price.

Where the buck goes next may just depend on the vote this weekend in Germany. If the SPD delegates vote to join another coalition government, the Euro could well break above 122.50, and that might keep the gold rally limping along. If the SPD votes no, the buck will probably scream higher, and gold will see a whole lot of selling pressure at that point.