Gold/Euros weekly dropped into a downtrend with today’s move down; GC/EUR is now in a downtrend in both daily and weekly timeframes. 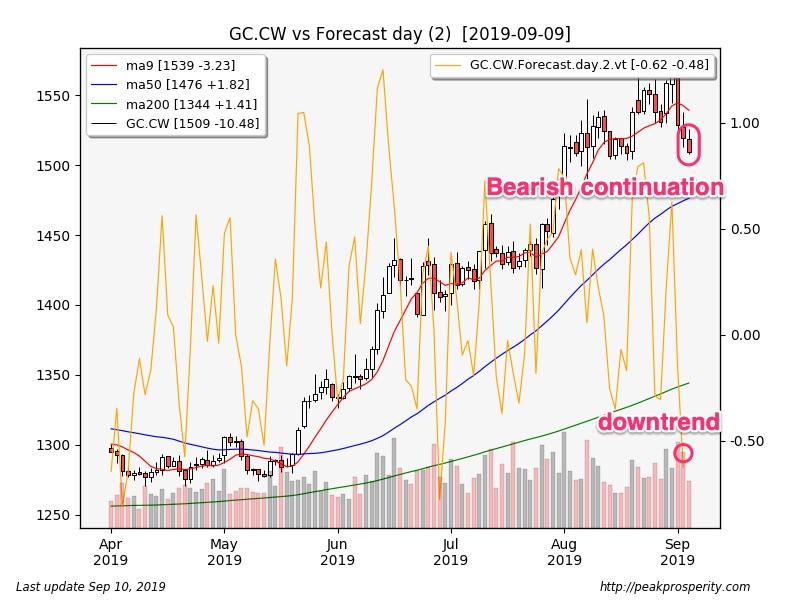 Silver followed gold lower; the long black candle was mildly bullish (33%), and forecaster dropped hard, putting silver into a downtrend.  Silver remains in an uptrend in both weekly and monthly timeframes, although the weekly is getting close to a reversal too. 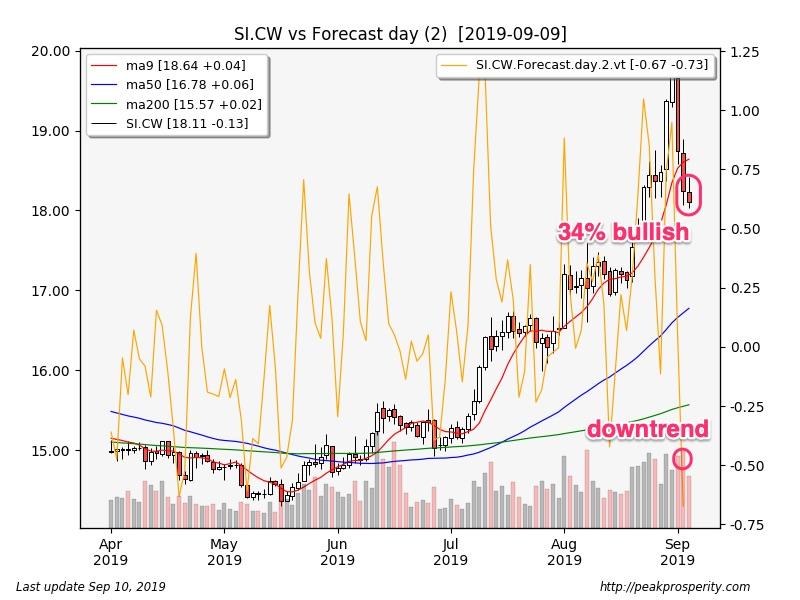 The miners fell at the open and never really recovered. GDX dropped -2.63% on very heavy volume, and GDXJ plunged -2.88% on heavy volume. XAU fell -2.30%, the long black candle was a bearish continuation, and forecaster dropped into a very strong downtrend. Today’s drop took XAU into a weekly downtrend also, which leaves XAU in a downtrend in both daily and weekly timeframes. 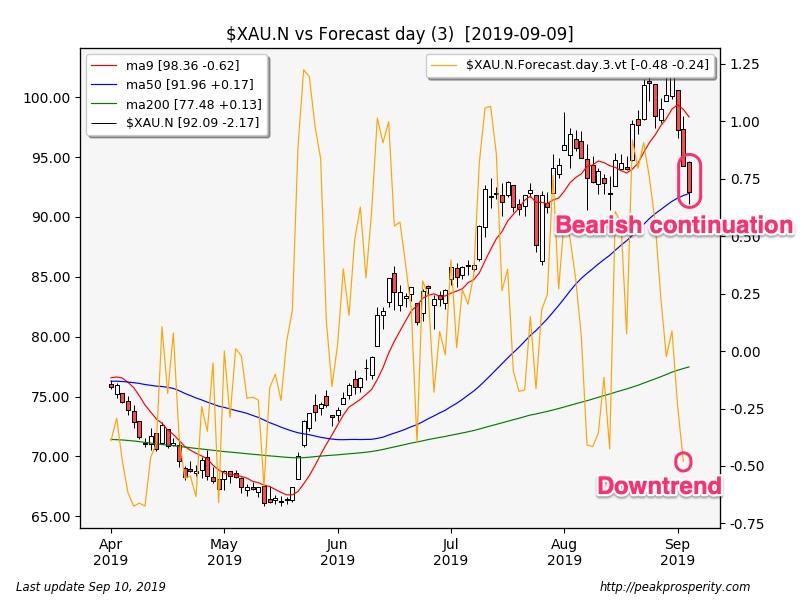 Crude rose +1.37 [+2.43%] to 57.82. The long white candle was a bullish continuation, and forecaster inched higher into a strong uptrend. Crude managed to break out above its recent trading range today; that looks bullish. Crude is now in an uptrend in both daily and weekly timeframes.

SPX fell -0.28 [-0.01%] to 2978.43. The short black candle was a bullish continuation, and forecaster moved higher into a very strong uptrend. SPX remains in an uptrend in all 3 timeframes.

TLT plunged -1.79%, another very large drop. The short black candle was a bearish continuation, and forecaster jumped higher but remains in a downtrend. TY fell too (-0.52%), the black marubozu was a bearish continuation, and forecaster moved lower into a strong downtrend. TY remains in an uptrend in the weekly and monthly timeframes. The 10-year yield rose +7.2 bp to 1.62%.

JNK rose +0.11%, the spinning top candle was a bullish continuation, and forecaster moved slightly higher and remains in a very strong uptrend. BAA.AAA differential was unchanged at +90 bp. Still no worries from the low-quality credit market.

More happy indications from the US-China trade negotiations; Mnuchin indicated that the US and China have reached a “conceptual agreement” on enforcement. To use that favorite phrase of cable news: “If true”, this is a reasonably big deal, as enforcement seemed to be one of the major sticking points in the past.

Either China is just playing around, or they are now seriously worried about “decoupling”. They have a good view into what those globalized US companies are doing in their country; perhaps the move out of China is starting to really pick up speed. Perhaps they have concluded that they can’t afford to wait until a more pliable US president is elected in 2020.  Maybe they want to head off any more talk of “decoupling” which is also starting to pick up speed.  That’s a lot of “maybe” and “perhaps”; if they do sign an agreement, then I suspect this will be the reason why.

A US-China trade deal would be negative for both bonds and gold, as it would remove some of those “cross-currents” that Powell is worried about – presumably reducing the number of rate cuts the Fed would make. Right now the correction in bonds is starting to pick up speed, especially in the 30-year, which jumped +9 bp.

We have an ECB meeting coming up this Thursday, and an FOMC meeting next Wednesday. Will the ECB start printing more enthusiastically? A no-deal BRExit could provide some more serious cross-currents for the EU, perhaps overshadowing any US-China trade deal, at least for them. And a no-deal exit is becoming more likely all the time. The Remainers, in trying to focus on locking in yet another Brexit extension (3 years after the vote to Leave!), have made no-deal more likely.

Although its a bit of a non-sequitur, I leave you with the following article from SCMP: Jack Ma is leaving the company he founded, at age 55.  The article notes: “this is very rare in China” where companies are run by their founders sometimes well into their 80s.  It also appears as though he is leaving the board in 2020 too.   The article does not satisfactorily answer the most interesting question – why is he leaving?  And who is now in control?

That Kyle Bass interview with the Chinese billionaire-in-exile that was posted a few weeks ago had a Jack Ma prediction.  Basically, Ma ends up exiled, in prison, or dead for crossing the Party in an unspecified way.  Could this be the first steps of that fall from grace playing out?

vid for those that missed it:

Have you seen this recent video from Mike Maloney about why not to buy platinum and palladium?

I usually like his stuff, but this seems like a hatchet job motivated by the fact that he doesn’t sell them and palladium is probably the best performing PM in ther past year.

Funny that they don’t mention the gold/platinum ratio at all.

Jack Ma leaving the board is just nuts.  Nobody leaves the board, certainly not the founder.  It’s a very low-stress “job”.

Is Bill Gates on the board of Microsoft?  Of course he is!  If you are the founder, and you still have a significant number of shares, you want to be there to keep your finger on the pulse, so whoever replaces you don’t totally screw it up – and if they do, you are in a position to help fix it.  Or to organize a … replacement.  🙂

I informed John Bolton last night that his services are no longer needed at the White House. I disagreed strongly with many of his suggestions, as did others in the Administration, and therefore..

While I’m glad Bolton is gone, or at least gone from the NSA role (does a creature like Bolton ever really disappear?), he never should have had any role at all in Trump’s administration.

The guy is certifiably psychopathic.  I know, I know, that’s a requirement for the job, but his brand was especially galling to me.

Still, small victories, and all that.  The world is a safer place with Bolton out of that particular role.

> Still, small victories, and all that. The world is a safer place with Bolton out of that particular role.

Yes, I would’ve thought fuel for the gold correction, but no real reaction…

I think the neocons are desperately trying to make Trump look presidential for 2020. Firing Bolton and pulling out of that meeting with the Taliban and Afghanistan because of a recently killed US solder seems staged to me since that happens all the time and killing a million Iraqis has been declared justifiable by Albright.  Bolton has trained him well, so nothing will change, especially since Pompeo is still there.

My favorite Bolton psycho video. Man, he’s been like the grease spot on the periphery of the world stage until he managed to weasel his way into a very powerful position.