Market-moving news: Mnuchin and Liu He had a good phone call, apparently, which with the understanding that the US and China would resume in-person talks at the beginning of October. This gives China four weeks to pacify Hong Kong, presumably without interference from the US; any US interference would after all jeopardize the trade talks.  China is pretty clever about this sort of thing, it would appear.

PMI services: headline 50.7, below consensus, and much lower than the previous value of 53.0. The number is almost-recessionary.

ISM Non-MFG Index: headline 56.4, above consensus, and higher than the previous value of 53.7. This conflicts with the PMI services number, and is definitely not recessionary.

Gold moved lower in Asia and London sessions, and really dropped off a cliff just after the US open at 9:35 am. The swing high candle was bearish (48%), and forecaster moved higher, but remains in a downtrend. Today’s drop was enough to pull the weekly into a downtrend too, which puts gold in a downtrend in both daily and weekly timeframes.

COMEX GC open interest fell -22,028 contracts, or 10 days of global production in paper, gone. Looks like a whole lot of short-covering on the decline. I take that as a positive sign. 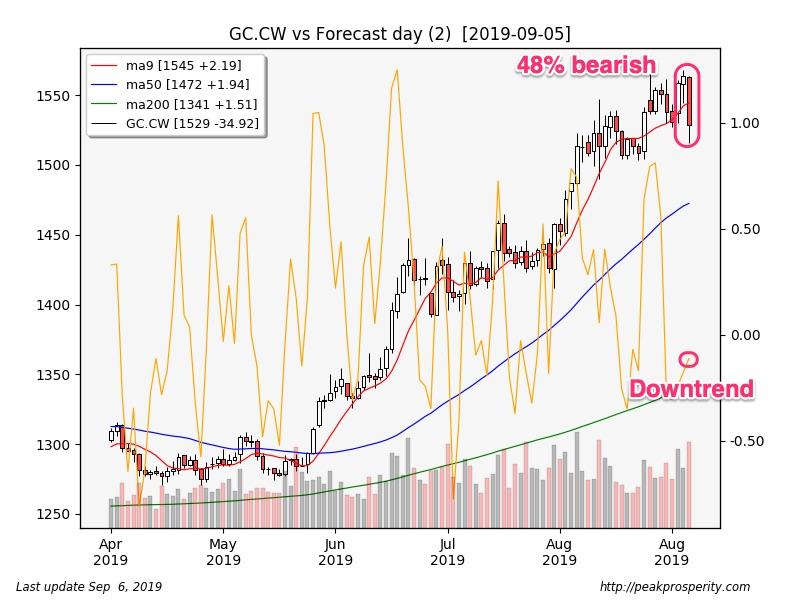 Silver followed gold, falling in Asia and London, with the plunge accelerating just after the US open. The swing high was bearish (53%), but forecaster moved a bit higher, putting silver back into an uptrend. Silver is in an uptrend in all 3 timeframes.

COMEX SI open interest fell -6,093 contracts, or 13 days of global production in less paper. Short-covering on the decline is a positive sign. 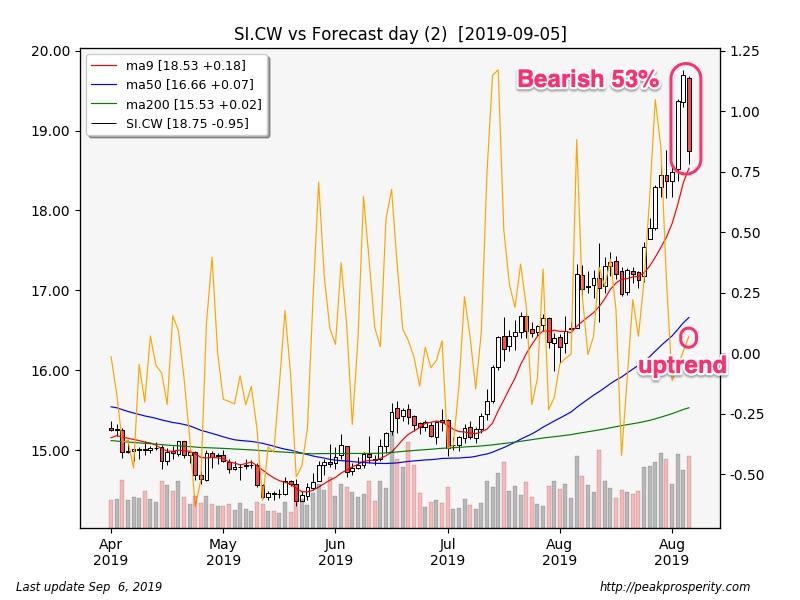 The miners gapped down at the open, then fell for the first half of the day. GDX plunged -5.30% on extremely heavy volume, and GDXJ dropped -5.78% on extremely heavy volume also. XAU dropped -4.41%, the confirmed bearish NR7 was actually a bullish continuation, and forecaster dropped into a downtrend. Today’s move took XAU below the 9 MA. XAU is in an uptrend in both weekly and monthly timeframes. 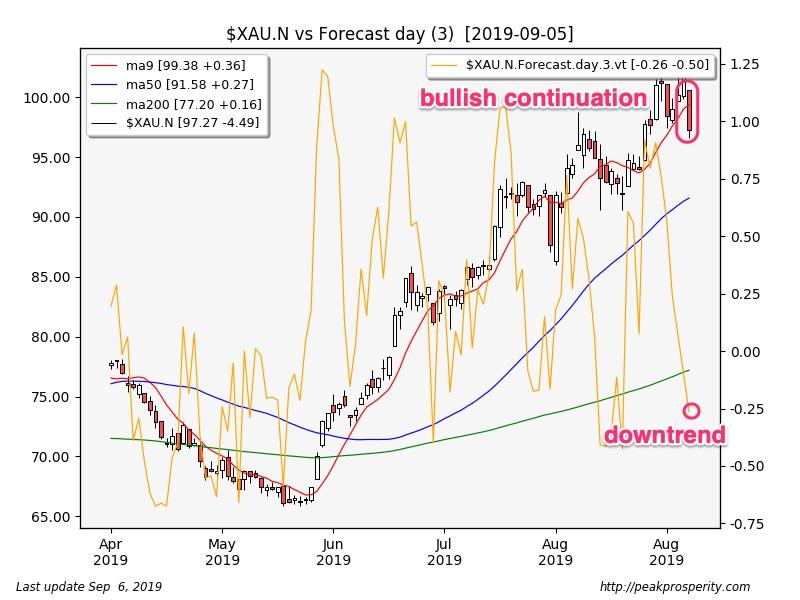 Platinum plunged -2.70%, palladium rose +0.24%, and copper rallied +1.49%. You can see that platinum is aligned with risk-off gold, while copper looks like a risk-on asset, tied to China and renewed hopes for a trade agreement. Copper is back in a strong uptrend, while platinum is looking as though it might reverse – although the bearish harami candle print isn’t actually bearish. Surprisingly.

The buck fell -0.02 [-0.02%]. The southern doji is a bearish continuation, and forecaster moved lower into a downtrend. DX is now in a downtrend in both daily and monthly timeframes.

Crude rose +0.05 [+0.09%] to 55.82. Crude tried rallying today but the rally failed; a strong EIA report (crude: -4.8m, gasoline: -2.4m, distillates: -2.5m) caused a brief rally which later retraced almost completely. The shooting star candle was bearish (41%), but forecaster moved higher into an uptrend. Crude is now in a downtrend in both weekly and and monthly timeframes, but both trends are quite weak.

SPX rose +38.22 [+1.30%] to 2976.00. Most of the gains came in the futures markets overnight. The long white candle was a bullish continuation, and forecaster moved higher into a strong uptrend. SPX remains in an uptrend in the daily and weekly timeframes.

JNK rose +0.36%, the long white candle was a bullish continuation, and forecaster is now in a mild uptrend. BAA.AAA differential rose +1 bp to +90 bp. Still no worries from the low-quality credit market.

The moves today look as though they were just popping some of the bullish exuberance in both PM and bonds. Crude isn’t really buying the China trade story, but equities sure do.  Silver’s RSI-7 dropped to 59 after today’s plunge.

Is this the top for PM? I don’t think so. It feels more like just a correction in an uptrend – although a violent one.  I’m not sure how to interpret the conflicting ISM/PMI services reports, but those manufacturing PMI values are quite recessionary.

We have an ECB meeting coming up next week. It should be interesting, and – probably – Euro negative. How much money printing will they do? Will they get rid of large denomination notes? Armstrong thinks that’s likely to happen eventually. Its all gold-positive.

We’re in a bull market for PM.