Market-moving news: China released some mildly positive economic news, including hiring as well as services. In addition, China reported crude oil imports of 10.6 mbpd, which is an increase of 8.8% y/y.

Gold moved lower in Asia and London sessions, bottoming out around 7:30 am, after which gold rallied to a new 6-year high. The spinning top candle was a bullish continuation, and forecaster jumped higher into a strong uptrend. Gold remains in an uptrend in all 3 timeframes. Given the plunge in the buck, gold’s rally today was just a currency effect. 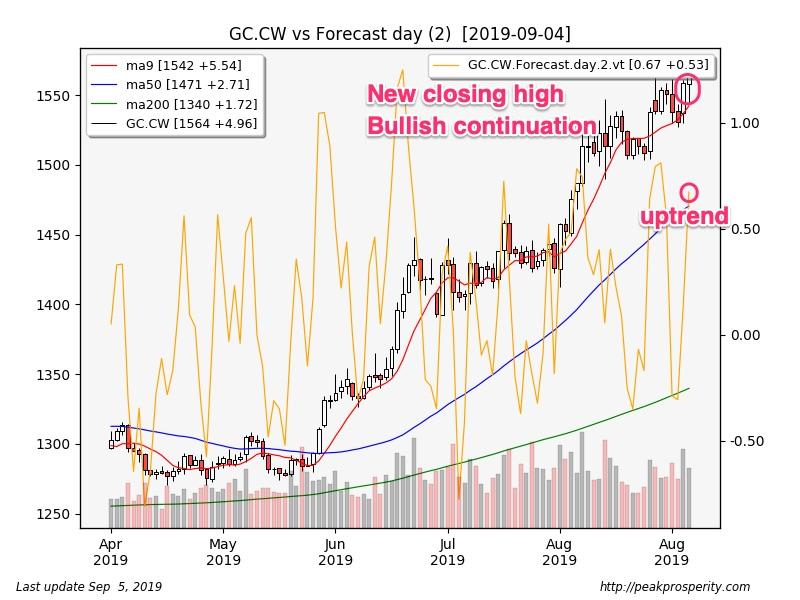 Silver moved higher in Asia, and again during the New York session. The long white candle was a bullish continuation, and forecaster moved higher into a very strong uptrend. Silver remains in an uptrend in all 3 timeframes. Silver’s RSI-7 is 91, which is quite overbought; contrast with gold’s RSI-7, which is just 70. 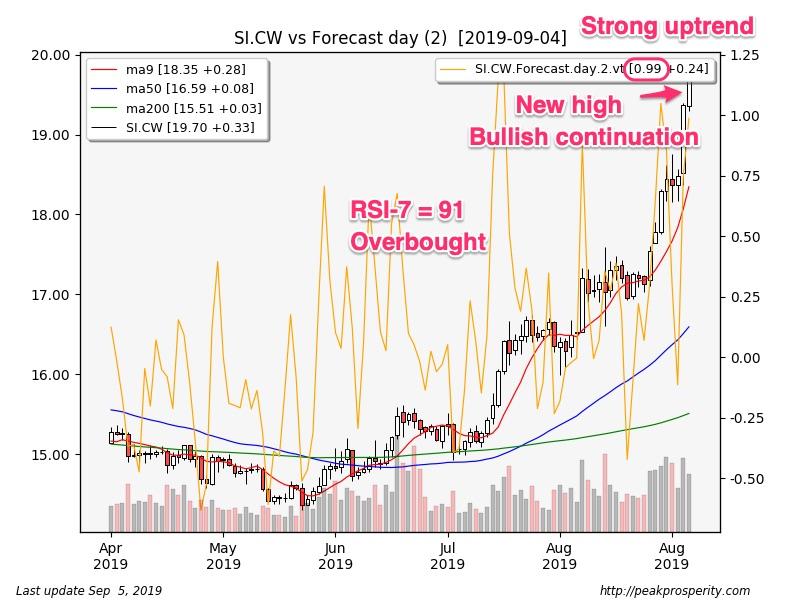 The miners gapped down at the open, then rallied all day long, closing at the highs. GDX rose +1.91% on moderately heavy volume, while GDXJ climbed +1.59% on moderate volume. XAU rallied +1.55%, the closing white marubozu/NR7 was a bullish continuation, and forecaster inched higher and remains in a slight uptrend. Today was a new closing high for XAU. XAU remains in an uptrend in all 3 timeframes. 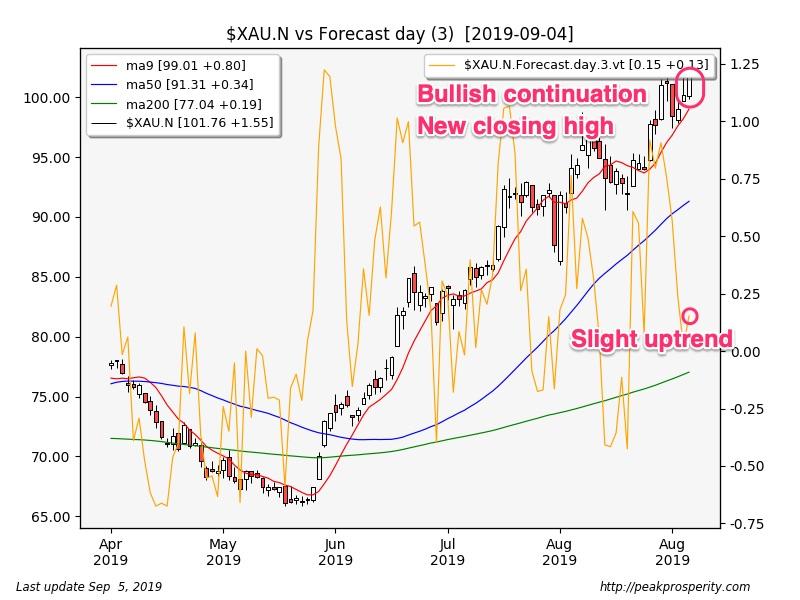 Platinum jumped +2.87% (again!), palladium climbed +1.00%, and copper rose a big +2.54%. Copper printed a very strong swing low (68% bullish), palladium is moving up towards its all time highs, and platinum continues to charge higher, unwinding the near-historic gold/platinum ratio. The gold/platinum ratio was 1.82 in mid-August, and it is 1.58 right now. That’s a large drop in a very short time period. Platinum is up roughly $120 over the past 5 days. Volume continues to be immense. 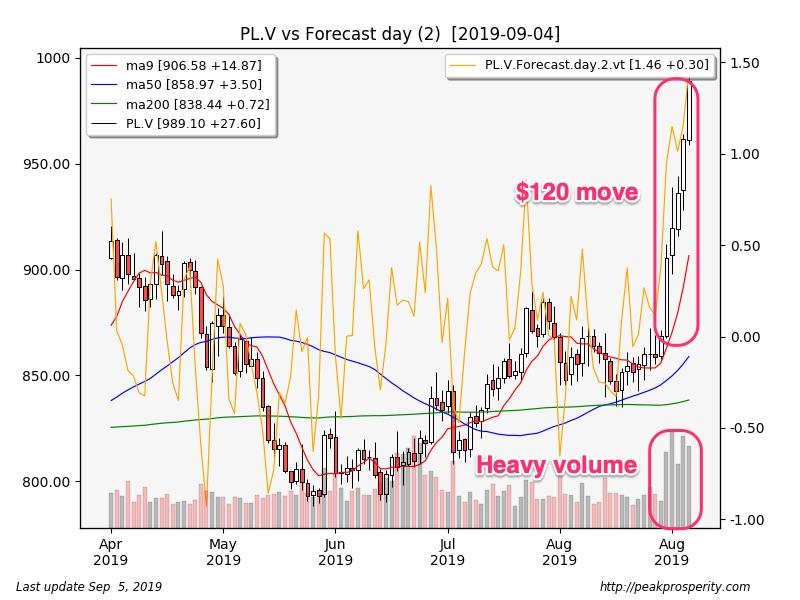 The buck fell -0.56 [-0.57%] to 98.00. The swing high print was very bearish (63%) and forecaster plunged but remains in an uptrend. In spite of today’s decline, the buck remains above all 3 moving averages, and it is in an uptrend in both daily and weekly timeframes.

The GBP rally is all about the prospect of the Remainers somehow being able order PM Johnson to basically Remain, in spite of the referendum where actual people voted in favor of Leaving. Presumably Johnson has a plan, probably for a new election, but the number of moving parts and arcane law is explained by Mish – at length, here: https://moneymaven.io/mishtalk/economics/another-weird-brexit-turn-tories-vote-to-support-no-deal-bill-in-house-of-lords-mUB9gkhpJEWtrA9sXGNoOw/

SPX rose +31.51 [+1.08%] to 2937.88. Most of the gains came in the futures markets overnight. The confirmed bullish NR7 was neutral, and forecaster moved higher into an uptrend. SPX remains in an uptrend in the daily and weekly timeframes.

JNK rose +0.23%, the swing low print was neutral, and forecaster moved higher but remains in a downtrend. BAA.AAA differential fell -2 bp to +89 bp. Still no worries from the low-quality credit market.

The PM rally continues – silver and platinum leading, with the miners close behind.  Silver is overbought, but its hard to know when a correction will take place.  Maybe that happens today – given what prices are doing at the open.

I’m traveling right now – this is why my report is appearing somewhat late in the day.

The blog highlighted the statement from China’s Ministry of Commerce saying both sides will make consultations in mid-September in preparation for “meaningful progress” in the ministerial-level talks in October. “Meaningful progress” is an expression that hasn’t been used at all since the talks in May fell apart, Taoran noted.

“But if you want to get your feet wet, there are some rare coins that offer solid value compared to the typical premiums they sell for. The $20 Saint-Gaudens “double eagle” is a great example.

In the past $20 Saint-Gaudens double eagle has sold at a premium of hundreds of dollars above the spot price of gold.

Today, however, the premium is quite low– I’ve seen these coins selling for premiums of less than $50 above the price of gold.

That’s almost as cheap as a Canadian gold Maple Leaf coin, but with the added benefit of owning a coin that’s rare. Again, no one can go back in time to the early 20th century and make more of these coins.

So it’s possible that, in a few years, we could not only see a MUCH higher gold price, but MUCH higher premiums for the Double Eagle. So you could make money both ways.”

Here’s a really unique way to own gold