Gold started its plunge around 1:30 am, and moved lower for most of the day, touching 1195.10 at its low point, ending the day relatively close to the lows. Candle print was a long black candle, which was a bearish continuation. Forecaster dropped -0.34 to -0.24, which is a sell signal for gold. Gold is in a downtrend in all 3 timeframes. 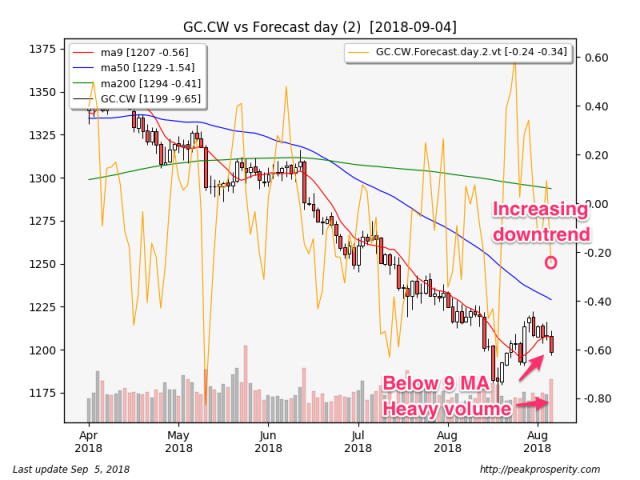 Silver fell harder than gold, also starting its drop around 1:30 am, making a new low to 14.03, which means silver has broken 14.30 support. That’s a bad sign. Volume was extremely heavy, and there was no sign of short-covering. Forecaster dropped -0.14 to -0.80. There’s just no good news for silver right now. Forecaster remains in a downtrend in all 3 timeframes.

The gold/silver ratio jumped +1.54 to 84.48. That’s quite bearish. The gold/silver ratio has not been this high since the depths of the crash in 2008. While the g/s ratio tends to point out the trend, it can also be useful in showing just how extended a move happens to be. Gold bottomed out in 2008 within about 5 days of GSR=84. So while a rising GSR is a bad sign, a GSR above 84…is a sign that a low could be near, say, within the week. Theoretically anyway. 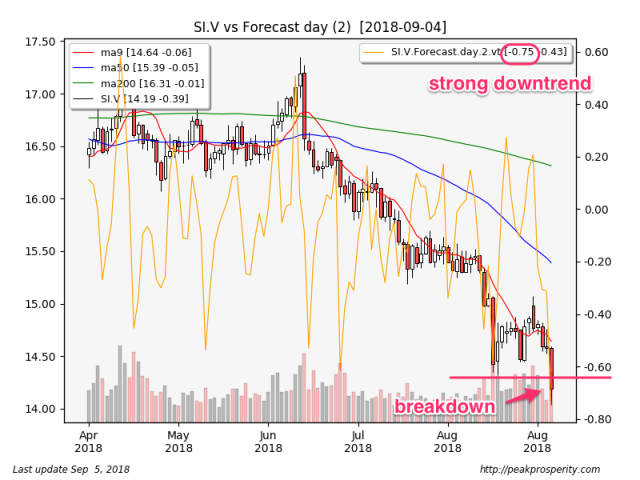 Miners fell along with the metal, with GDX down 2.86% on heavy volume, while GDXJ dropped -1.85% on heavy volume also. GDX made a new low, while GDXJ managed to avoid that fate; that’s a mildly positive sign. XAU plunged a huge -4.24%, making a new low; the opening black marubozu candle was a bearish continuation. Forecaster plunged -0.51 to -0.69. The juniors might have done fairly well, but the overall mining index looks terrible. XAU is in a downtrend in all 3 timeframes.

The GDX:$GOLD ratio fell -2.08%, while the GDXJ:GDX ratio rose +1.04%. That’s more bearish than bullish – and perhaps it stems from the fact that silver was hit really hard, while gold held up reasonably well. 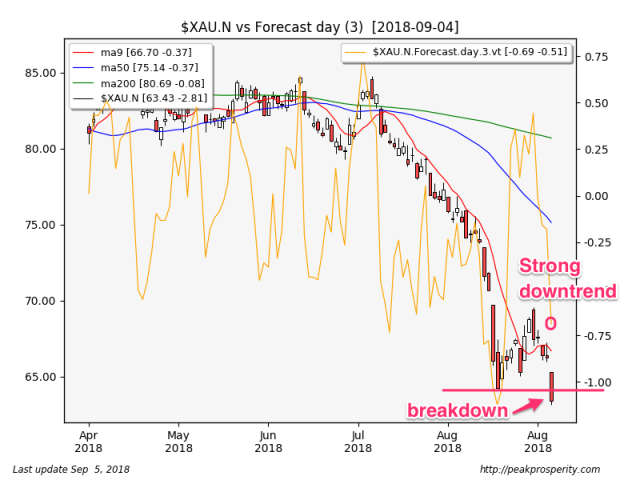 Platinum fell -1.25%, palladium was unchanged, while copper plunged -2.49%. Copper made a new low to 2.58, which wasn’t a multi-year low, but it does appear to be heading to re-test the lows (2.55) set back in early August. I’m guessing the other metals are weakening because of the impending deadline for the imposition of tariffs on $200 billion in Chinese products.

The buck rose +0.30 [+0.32%] to 95.04. The move higher in the buck seemed to be related (at least to some degree) to the TRY, which jumped higher starting around 1:30 am. Candle print was just a long white candle, which was a bullish continuation. Forecaster jumped +0.58 to +0.57 which was a buy signal for the buck. Buck is in an uptrend in both the daily and monthly timeframes. 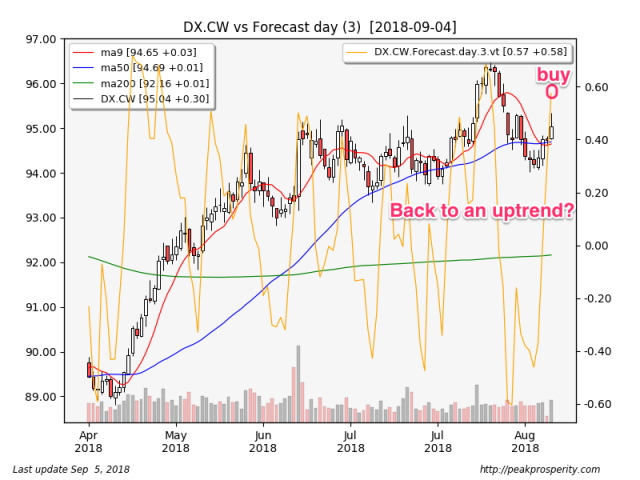 The Turkish 10-year dropped 39 bp to 19.98, which is a reasonably large move down. Are things getting better in Turkey? Maybe, kinda. After government-reported inflation came in at 17.9% y/y on Monday, Turkey’s central bank “signaled” it would take unspecified action to promote price stability; that’s probably what caused the rates to drop. Turkey’s next central bank meeting is on September 13.  Currently, rates are at 17.75%. If the central bank fails to raise rates “sufficiently” (whatever that means), I’d expect a vicious sell-off in both the currency and the bonds. The TRY is edging slowly back up towards the previous high, ending the day today at 6.69.

Crude fell -0.46 [-0.66%] to 69.01. The prospect of Hurricane Gordon hitting a bunch of oil platforms has caused production to be shut-in in the Gulf of Mexico, and this initially popped crude prices to a new high of 71.40, but it soon retreated, losing all it gained and then some. Crude’s shooting star candle was a 39% bearish reversal, but crude forecaster jumped +0.32 to +0.19, which is a buy signal for crude. Crude is in an uptrend in all 3 timeframes.  Curious that buy signal on a shooting star candle.

TLT plunged, dropping -0.80%, printing a swing high (53% bearish) and sending the forecaster into a sell signal. TY didn’t look quite so horrid, losing -0.25%, but it printed a confirmed northern doji (48% bearish), with TY remaining in a daily downtrend. TY weekly will also issue a sell signal this week if prices close here; TY remains in a monthly uptrend, at least for now.  It was a bad day for bonds.  The 10-year yield jumped +4.9 bp to 2.90%.

JNK was also pounded, with all of the losses coming on a gap-down open. Money is fleeing junk debt.

Well, copper and silver both had terrible days today, with silver looking substantially weaker – it made a new multi-year low.  Silver and copper are back in that triple-RSI-accumulate mode; the recent buy signal from two weeks ago turned out to be a headfake.  That’s how it goes sometimes.

It also appears as though silver is headed to re-test the multi-year low at 13.62.  The only way that doesn’t happen is for copper to stop dropping, and for the buck to stop moving higher.  That’s my sense anyway.

I’ll leave you with this chart – the Silver vs gold/silver ratio chart.  It suggests we are at or near a low.  I mean, silver could plunge another week or so from here, but this ratio suggests you should be selling your gold and buying silver.  Perhaps wait to see if the 13.62 low holds first. 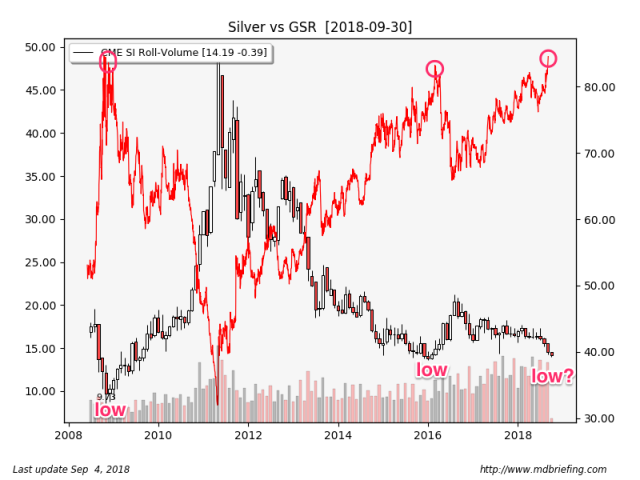