Gold moved higher in London, and rallied strongly following the weak ISM report released at 10 am. The long white candle was bullish (56%) and forecaster jumped back into an uptrend. Gold is now back above its 9 MA – the 3-day reaction decline is now over. This was a new 6-year closing high for gold, which is now back in an uptrend in all 3 timeframes.

COMEX GC open interest jumped +27,289 contracts. This is a large increase in OI – 12 days of global production in new paper. 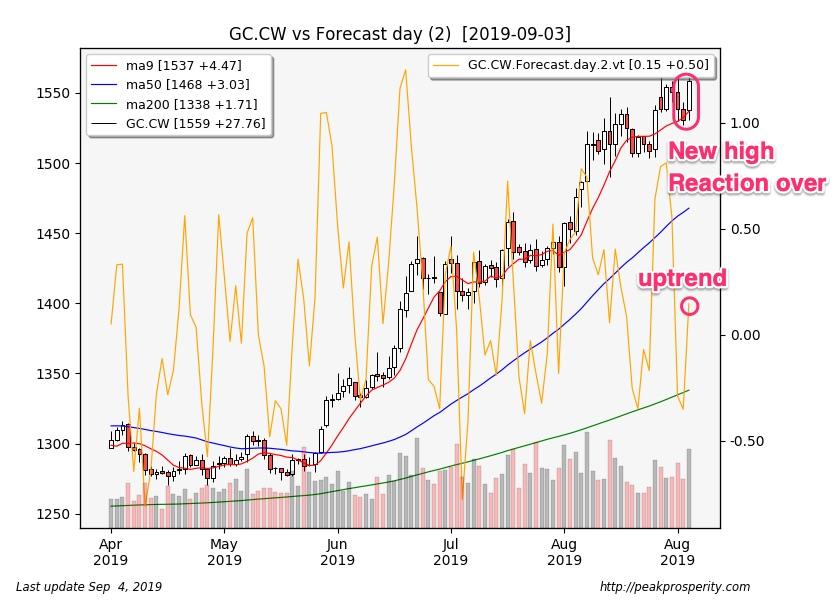 Silver’s rally started at around 9 am, and it took another leg higher after the recessionary ISM report at 10 am. Silver closed at the highs. The closing white marubozu was a bullish continuation, and forecaster screamed higher, moving back into an uptrend. Silver is in an uptrend in all 3 timeframes. 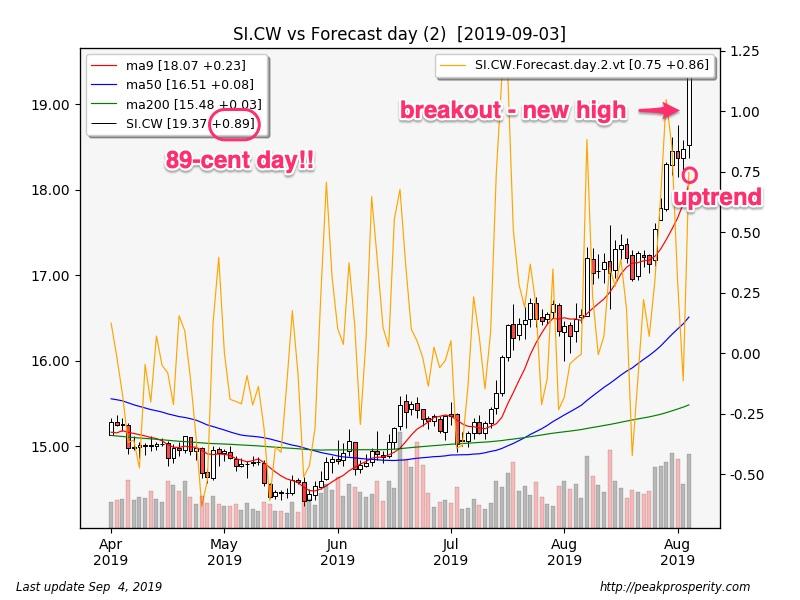 The miners did not do so well; they rallied through late morning, but then sold off for the remainder of the day. GDX rose +1.71% on very heavy volume, and GDXJ climbed +2.36% on moderately heavy volume. XAU climbed +1.24%, the shooting star candle was somewhat bearish (35%), and forecaster fell, but remains in a very slight uptrend. The rally was enough to push the weekly forecaster back into an uptrend, which means XAU is now in an uptrend in all 3 timeframes.

How can the miners do so poorly on a day when gold and silver screamed higher?  Normally I’d say “miners lead, this is bearish for PM”, but right now I’m just not so sure. 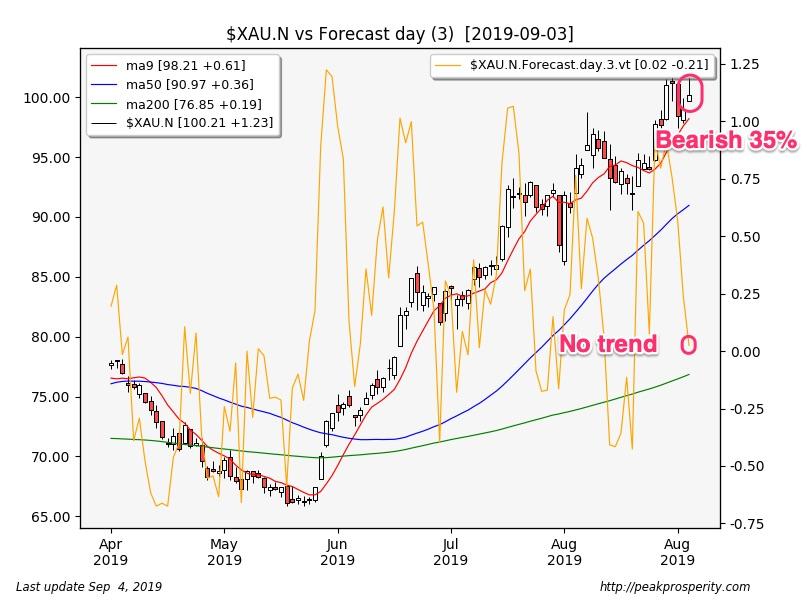 The buck rose +0.09 [+0.09%] to 98.56. This was a new high for the buck, but it looked like a failed rally. The high wave candle was bearish (42%), and forecaster fell but remains in a fairly strong uptrend. The buck is in an uptrend in both daily and weekly timeframes.

More BRExit machinations; Parliament is back in session. PM Johnson lost a “delay Brexit until January 2020” vote, with 21 Tories defecting. These 21 Tory rebels were then kicked out of the party. PM Johnson then linked a new election to the “delay Brexit” bill. Will we see new elections? Tories + Brexit party vs Labor + Lib Dem + Greens, and it would effectively be a second referendum on BRExit. Plenty of Labor members come from districts that support BRExit. Johnson’s team must have done the political math, and come up with the answer: “we’ll crush them at the polls.”

Some very good news out of Hong Kong: Carrie Lam has formally withdrawn the “extradition bill”; CNY/USD dropped 3 points (from a decade high of 7.17 down to 7.14).  It looks like Beijing has decided to pull back on their efforts to take control over Hong Kong 27 years early.

With the move, the government has met one of the key demands of protesters who have taken to the streets over the past 13 weeks in demonstrations that have turned increasingly violent. But will the majority of protesters be satisfied?

SPX fell -20.19 [-0.69%] to 2906.27. The swing high print was neutral, and forecaster inched higher and remains in an uptrend. The drop was enough to pull the monthly forecaster into a downtrend; SPX is now an uptrend in just daily and weekly timeframes.

JNK plunged -0.74%, the spinning top candle was a bearish continuation, and forecaster dropped hard, entering a downtrend. What caused junky debt to plunge so hard? I’m not sure – almost all the losses happened at the open, so it wasn’t the ISM report. BAA.AAA differential was unchanged at +91. Still no worries from the low-quality credit market.

Silver is rapidly unwinding that extended gold-silver ratio with some really massive rally days.  If you remember, I predicted this would happen, although it didn’t take a genius; all you had to do is look at silver’s past.  Silver just goes nuts during bull market moves.  It is a small market, and only (relatively) small amounts of money will cause large rallies.  Platinum also continues to do extremely well, on very high volume.  It sure looks to me as though money really wants to move into PM, and they are loading up on the “undervalued PM items” at this moment.

Silver’s RSI-7 is at 89, which is quite overbought.  It could still go higher, of course.  Predicting what happens in the next few days is impossible, at least for me anyways.

We are now in September, the worst month for equities, and the economic data is starting to look remarkably poor, especially in manufacturing.  Rate cut projections are increasing.

In Hong Kong, withdrawal of the extradition bill will (I suspect) take the wind out of the protests.  This should close out the prospect of military action by the PLA, as well as taking the potential banking crisis off the table too.  It is very good news, especially for the people of the city itself.  We will have to see how the protesters respond, but I suspect the large scale protests will come to an end.  This should be positive for CNY/USD too.

Your continous mention of platinum being ignored until recently led me to have a look at the metal. I then came across this chart from Bullion Vault. 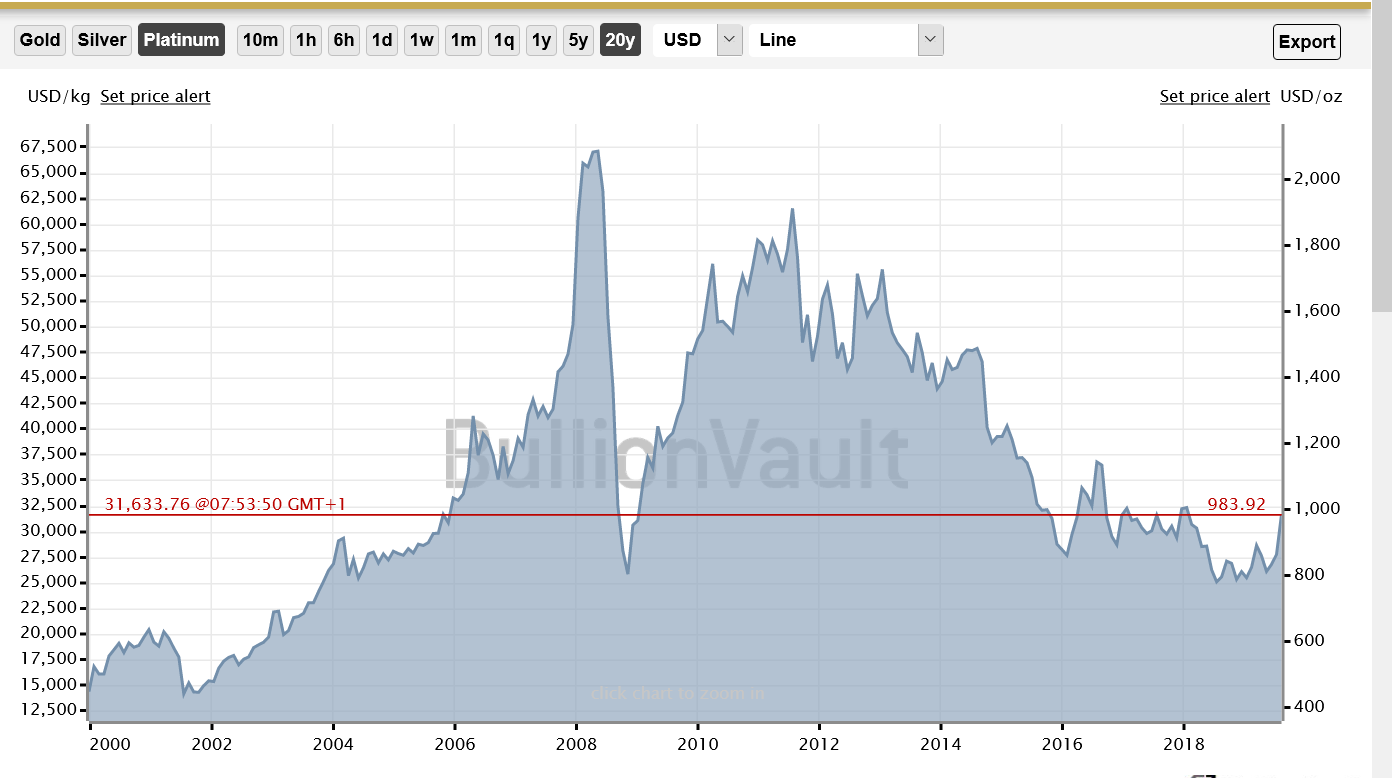 What struck me was the steep fall in 2008. From a peak in around March 2008, the price fell almost continoulsy until Oct/ Nov 2008.  The price at its low was approximately 34% of its peak.

A look at gold and silver showed a similar pattern, but the falls were only to 71% (gold) and 43% (silver) of their previous peaks. I also noticed that, although platinum climbed like the other PMs to peak in 2011, its subsequent peak was below the 2008 peak.  Any thoughts on why it behaved differently? Is it in a thinner market? Does it have more industrial component? I am curious.