Gold edged lower until about 8 am, when it seemed to just fall off a cliff, losing $10 in about 40 minutes. Gold ended the day right at the lows. Gold broke below its uptrend line, and the forecaster plunged -0.33 to -0.50. Gold remains in a downtrend in all 3 timeframes.  Today’s breakdown looks worrisome.  Gold could be on a path to re-test the 1167 lows.

COMEX GC open interest rose +8,961 contracts. It looks as though the shorts are back at it once again. 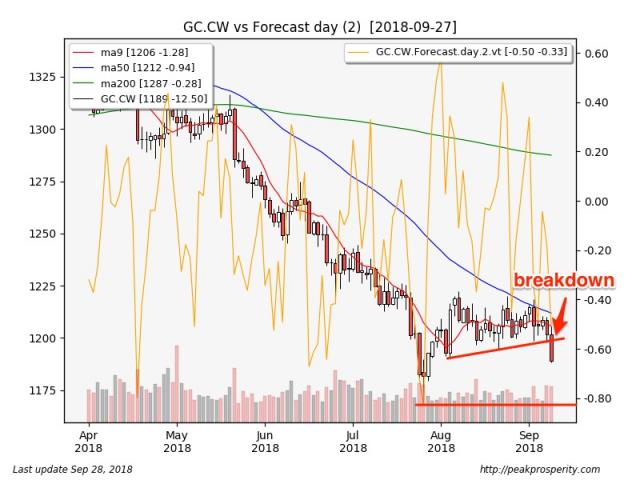 Silver also sold off after 8 am, but the drop was relatively minor, and silver managed to bounce back at least to some degree. While the spinning top candle was neutral, forecaster plunged -0.43 to -0.35, which is a sell signal for silver. Today’s move pulled silver back below the 9 MA. Silver is now in a downtrend in both the daily and monthly timeframes.

COMEX SI open interest fell -663 contracts. Interesting how the shorts are piling onto gold, but silver is showing some covering.

The gold/silver ratio fell -0.41 to 83.16. That’s bullish – and the current level for the ratio suggests PM could be at or near a long term low.  Given today’s move in gold, that seems unlikely, but there it is. 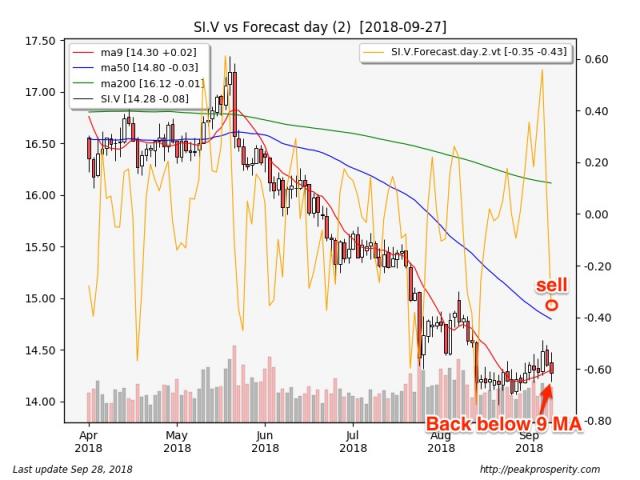 Miners sold off early, and then bifurcated; GDX bounced back (-0.43%), while GDXJ (-2.29%) did not. XAU fell -0.66%, with the short white/spinning top looking neutral. Forecaster edged up +0.06 to -0.09. That’s still a downtrend, but given what happened to gold, it was actually a pretty good performance by the miners. Still, the miners remain in a downtrend in all 3 timeframes. 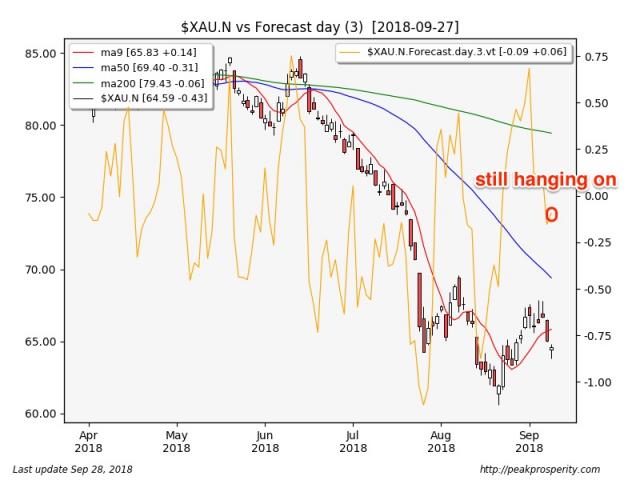 Platinum fell -1.45%, palladium moved up +1.65%, and copper dropped -1.30%. As I mentioned earlier, the largest influence today on gold seemed to be platinum, which started plunging at around 7 am and didn’t stop until around 10 am, losing more than $20 over that time period.

The buck rallied +0.75 [+0.80%] to 94.48. The strong rally in the buck was all about the Euro [-0.93%] which plunged relative to the buck due to (my guess) traders projecting a strong and likely increasing interest rate differential between the buck and comparable EU instruments.  [EDIT]  That, and the new proposed Italian budget is going to exceed Brussels rules on the deficit (2.4% of GDP, vs 0.8% of GDP); blame paying for campaign promises like the UBI, a flat tax, and “pension reforms” – whatever they are.   https://www.theguardian.com/business/2018/sep/27/the-euro-and-stock-markets-fall-amid-italy-budget-fears

The confirmed bullish doji print was a 51% bullish reversal, and forecaster shot up +0.70 to +0.41, which is a buy signal for the buck. This pulled the buck back above the 9 MA. The buck is in an uptrend in both the daily and monthly timeframes. If the dollar rally continues in this way, I suspect gold will re-test its 1167 lows.  And maybe more. 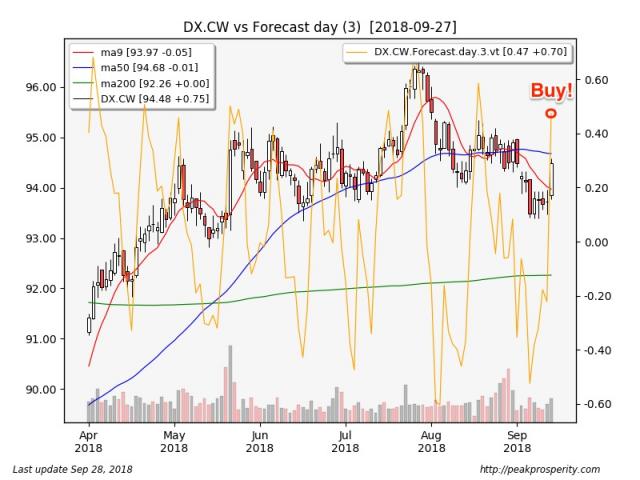 Crude rose +0.13 [+0.18%] to 72.00. Mostly crude just chopped sideways today; the short white candle was unrated, but forecaster fell -0.20 to -0.03, which is a tentative sell signal for crude. Still, crude remains in an uptrend in both the weekly and monthly timeframes. While it appears that oil may have run into resistance at 72, it remains quite close to its recent highs. Crude has been in an uptrend for the past 15 months, at least according to my model anyway, and that uptrend remains in place. 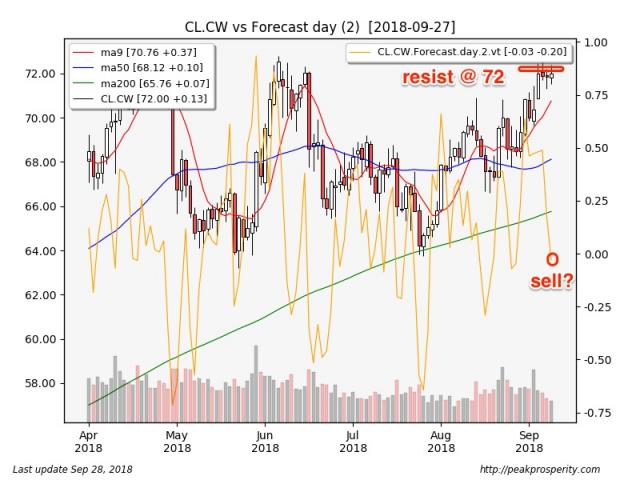 SPX rose +8.03 [+0.28%] to 2914.00. In spite of the higher close, equities tried to rally but largely failed. Daily forecaster remained in a downtrend, while the weekly and monthly both still point higher. Sector map had utilities leading (XLU:+1.03%) while materials lagged (XLB:-0.87%). Call today’s map neutral, although the candle print looked bearish.  Still, equities do not seem to be following through off yesterday’s post-FOMC sell-off.

TLT rose +0.07%, not much change; TY fell -0.04%, which suggests there may not be much follow-through from yesterday’s big bond rally. Bond remain in a downtrend in both the weekly and monthly timeframes. The 10-year yield fell -0.5 to 3.06%.  Bonds probably only rally if equities decide to plunge.

JNK rose +0.19%, a strong move higher that took JNK into position to re-test its recent highs. JNK managed to close above its 200 MA, which it hasn’t been able to do since early 2018, and then only briefly.

Gold was pounded today, no question about it, and the shorts piled in.  Platinum was hit even harder, but unlike gold, platinum saw some heavy short-covering: the OI fell -2,698 contracts.  That was about 4% of the open interest for platinum wiped off the board.

Oddly, silver seemed to perform fairly well, losing only half as much percentagewise as gold.  We also saw some short-covering in silver too.  Silver’s chart, while it also appears to be breaking down, looks much better than gold.

And the miners managed to avoid disaster – well the senior miners anyway.  How long can they do this if gold continues to plunge?  I’m not so sure.

It probably all goes back to that dollar rally.  If the buck continues to scream higher, which appears to be a rate-driven phenomenon, gold and the miners are probably going to re-test their lows.  That’s what the current pattern is showing.  My guess anyway.