Gold has more or less moved sideways for the last three days; it remains above its 50 MA – and it is actually above all of its moving averages – but it has been unable to move above the downtrend line.  Given that the buck fell today I had hoped for a little more enthusiasm from gold, but its likely that the commercials are adding to their short positions at this level, and without some real buying enthusiasm, it will be tough for gold to move higher.  Today’s candle print was another spinning top, which is no help for us in determining direction. 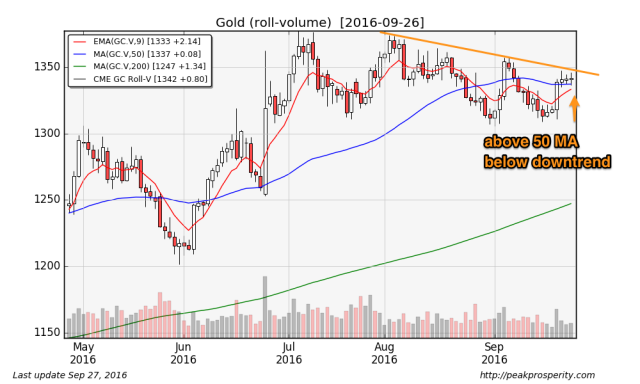 Silver has continued to retreat from its high, dropping below the 50 MA and coming to rest right at the 9.  Silver tends to lead gold, so this is bearish for PM overall.  If silver falls below the 9 (at 19.52), I expect we will see a retest of the 18.41 low.  Downside volume is starting to rise slowly, which is bearish. 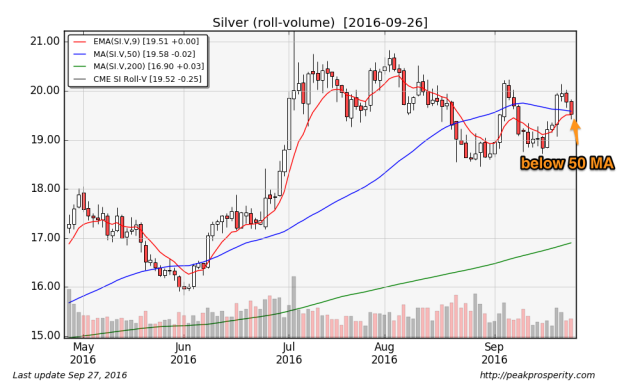 Miners rallied in the morning, but then sold off for the rest of the day, closing at the lows, resulting in a failed rally.  Miners closed the day below the 9 EMA, which is bearish.  The only positive part was the light volume – positive in the sense that selling on light volume doesn’t suggest a mass exodus from the miners.  But the situation is looking more bearish by the day.  Last week’s one-day rally following FOMC may have just been a short-covering rally in the middle of a larger downtrend movement – it is certainly starting to look that way, anyway. 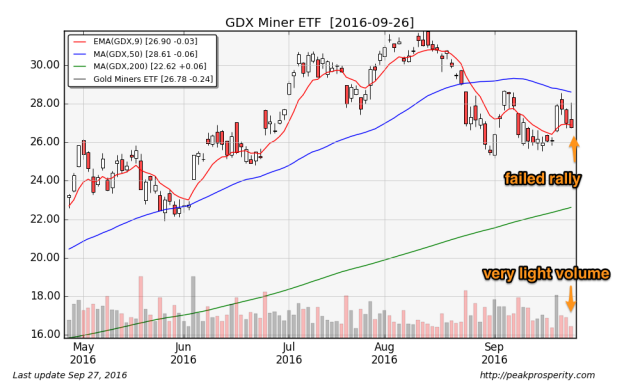 Platinum fell -1.34%, palladium dropped -1.45%, and copper moved down -0.48%.  Platinum is in a strong downtrend, palladium is in a mild downtrend, while copper is moving higher.

Crude rallied sharply, up +1.03 to 45.62, seeming to find support on its 50 MA.  Crude has not managed to snap its medium term downtrend just yet.  Candle print was a bullish harami – 33-43%, which is above average for this pattern.  Today’s move seemed to be short-covering in advance of an OPEC meeting happening now in Algeria that will last for three days (i.e. 26-28th).   Its actually an International Energy Forum, but the markets care only about what is happening in the side meetings between the major producers.  If there is no agreement, I’d guess price would drop to re-test the recent 43 support level – although a bullish petroleum status report might keep prices from dropping too far.

TLT continued rallying, up +0.64%; it looks as though bonds as a safe haven are not dead yet.  TLT is now almost back to its 50 MA.

JNK dropped -0.44%, closing just below its 9 EMA and printing a swing high.  Interesting; junk dropping on a day when energy rallied strongly.  Looks like risk off to me.

CRB rose up +0.79%, its hard to say where commodities are going right now.  On the weekly chart, they’re still trying to recover off the lows.

PM is weakening; silver is leading lower, and the miners seem to be following.  Gold is hanging in there, but if silver continues to drop, I don’t project good things for the PM complex overall.  Longer term gold pretty much has to go higher, but in the shorter timeframe…PM remains in a downtrend, at least up until the downtrend lines are broken.