Gold moved higher in a narrow range today. The short white/spinning top was unrated, and forecaster moved sideways, remaining in a slight downtrend. Gold remains in an uptrend in both weekly and monthly timeframes.

Futures are projecting a 67% chance of one rate cut in December, and an 17% chance of two rate cuts.  It sure looks as though the market doesn’t believe the Fed’s dot plot released yesterday, which suggests there won’t be any rate cuts for the next 15 months. 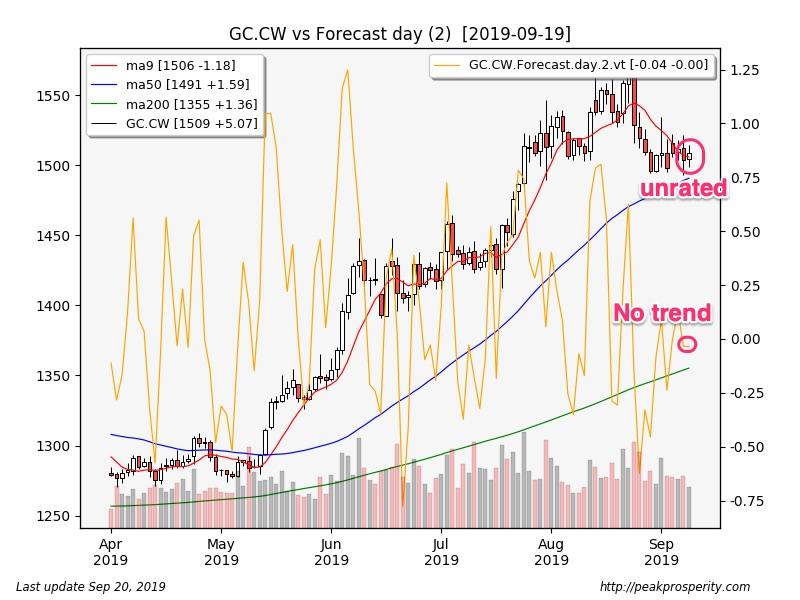 Silver more or less chopped sideways today; the doji candle was unrated, and forecaster moved lower into a downtrend. Silver remains in an uptrend in both daily and monthly timeframes. 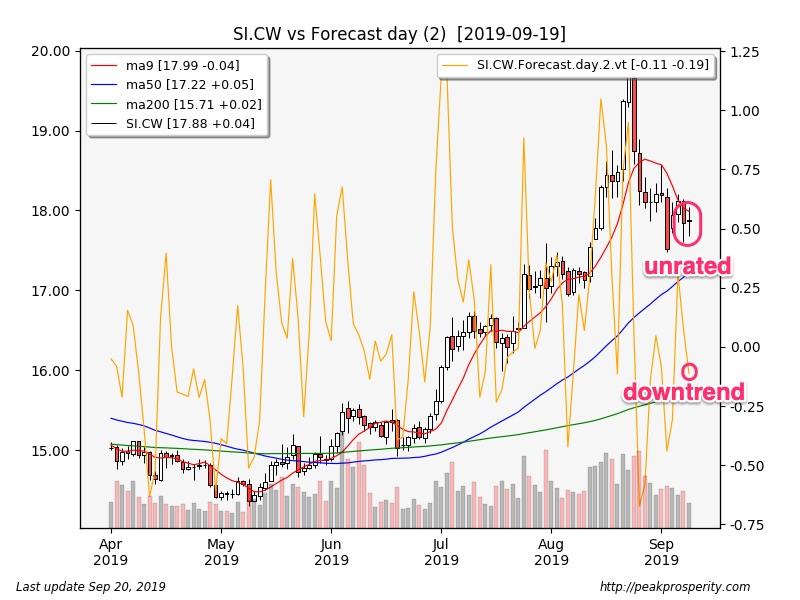 Miners gapped up at the open, and moved higher for much of the day. GDX rose +1.74% on moderate volume, while GDXJ jumped +3.00% on very heavy volume, unwinding almost all its losses from yesterday. XAU climbed +1.93%, the opening white marubozu was a bullish continuation, and forecaster moved higher into an uptrend. XAU remains in an uptrend in the daily and monthly timeframes.

The miners may be telling us we’ve put in a low. Both ETFs seriously outperformed gold today. That’s a real positive. 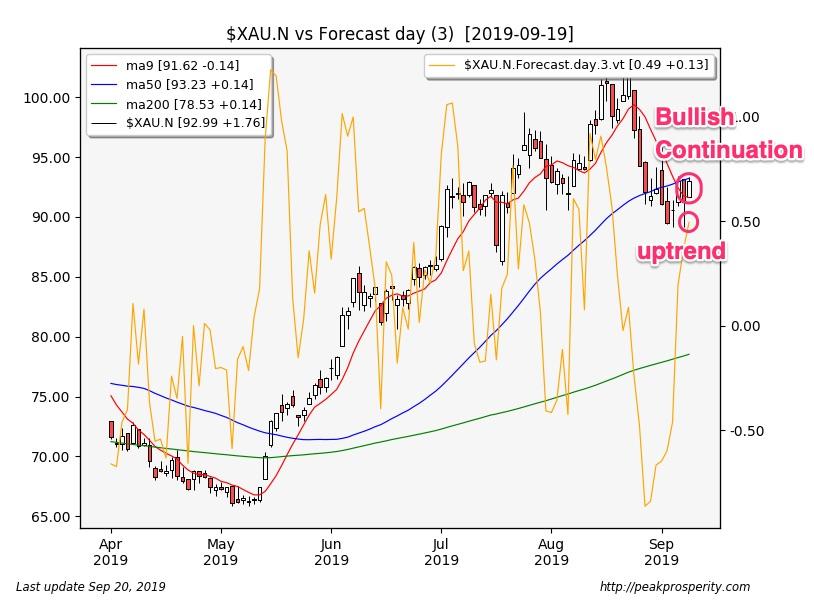 Platinum rose +0.69%, palladium climbed +1.85%, and copper rose +0.08%. The platinum rally looks mildly positive for PM.  Palladium looks to be about to break out to yet another new all time highl

The buck fell -0.29 [-0.30%] to 97.81. Today was yet another day of fairly vigorous sideways chop in the buck. The long black/NR7 candle was unrated, and forecaster dropped into a downtrend. DX is in a downtrend in both daily and monthly timeframes.

Is there a potential BRExit deal in the offing?  Mish thinks: maybe yes, there is.  Boy the politics sure is complicated though.

Crude rose +0.51 [+0.88%] to 58.45. The spinning top was mildly bullish [35%] and forecaster moved lower into a mild downtrend. Crude remains in an uptrend in both weekly and monthly timeframes.

JNK fell -0.12%, the spinning top candle was unrated, and forecaster inched lower but remains in an uptrend. BAA.AAA differential was unchanged at +88 bp. Still no worries from the low-quality credit market.

While gold and silver aren’t back in an uptrend just yet, the mining shares look substantially better than they did 3 days ago.  We may have a low for the shares, and they typically lead.  While SPX is not far from another all time high, bonds are continuing to slowly recover.  Its probably a little premature to call the recent safe haven correction over, perhaps, but I get the sense that it just might be.

There is a new wrinkle forming – out of the blue – that might turn into something dramatic.  Over the past 10 years, the Fed has used Interest on Excess Reserves (IOER) to control the Fed Funds Rate (DFF); DFF is the interest rate that banks charge to borrow money from each other on an overnight basis.  Controlling the Fed Funds Rate is the Fed’s major lever, and for quite a while, they have been able to do so using IOER.

For the past 3 days, it has stopped working.  Here’s what that looks like in a chart: 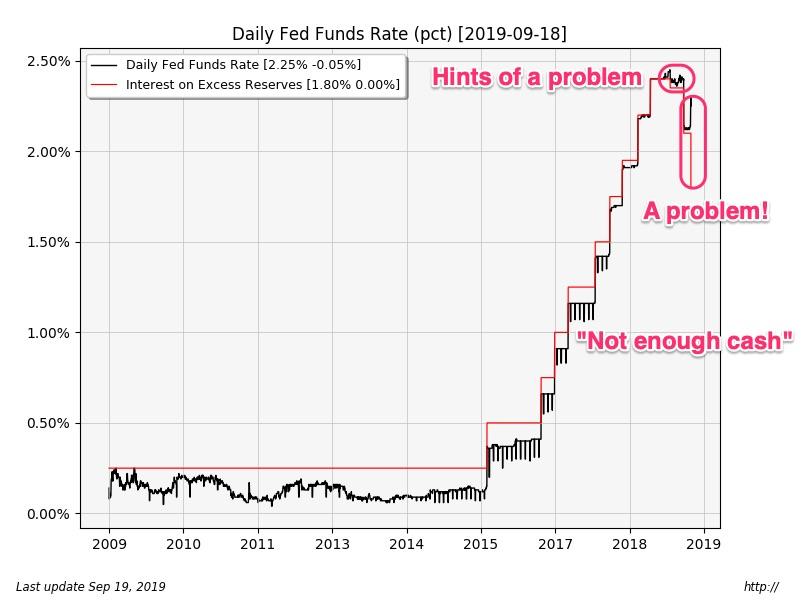 The problem appears to be, there isn’t enough cash.  Banks don’t want to lend money at the Fed’s chosen rate, IOER.  The Fed dropped IOER by 25 bp at the meeting on Wednesday, but that bank rate (DFF) didn’t drop as they wanted it to – it has gone up instead.

The technique the Fed uses to force DFF down is to print money, and buy short-term Treasury bills from the banks, “injecting” cash into the system.  Supposedly if the banks have cash, they will be more willing to lend money to one another – and if the Fed provides  a whole lot of cash to its member banks and sucks up all the available treasury bonds, the banks will want to do something with that cash, they will make it available to lend to other banks.  Increase supply of cash above short term interbank demand, and rates should drop.

So far, that hasn’t happened.  The Fed has dumped hundreds of billions into the system (in exchange for treasury bonds), and DFF and IOER remain far apart.

What is more interesting is that this cash injection has started to show up on the Fed’s balance sheet – the Fed is the proud owner of a bunch of new Treasury bills, due to their attempt to force DFF lower.

So I have two questions:

Question #1: Is this the return of QE?

Question #2: just what is the source for all that new demand for interbank borrowing?

Time will reveal all, but right now, this is a very interesting new development.  And ultimately it will be bullish for gold, I suspect. 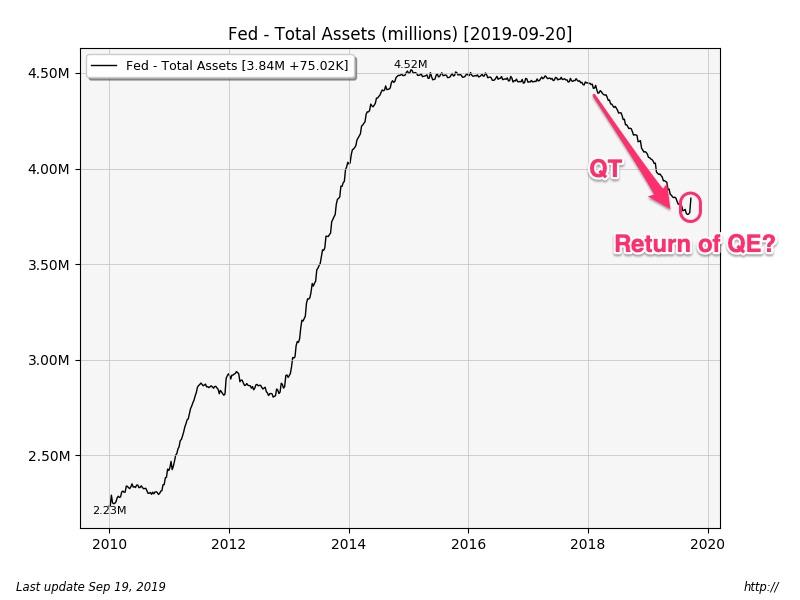