Today was all about the FOMC: the Fed dropped rates by 25 bp, which was somewhat of a surprise to me.  However, the Fed also suggested (via the dot plot) that this was possibly the last rate cut we would see for the next 15 months. PM was not so happy with this projection.

The press conference was helpful at describing what metrics the Fed allegedly was using to assess the situation:

Is this really the last cut through 2020? Powell hedged; “There is a lot of uncertainty around that.” Regarding the dot plot that projected no rate cuts for 15 months: “I’d be very reluctant to look at it as hardened views, or a prediction, really.”  You should watch what he said and his body language in answering this question:

Gold rallied going into the FOMC announcement, and sold off once the announcement hit, making a new low to 1490, rallying back into the close. The spinning top candle was mildly bullish (33%) and forecaster moved lower, moving into a very slight downtrend. Gold is in an uptrend in both weekly and monthly timeframes.

Futures are projecting a 58% chance of one rate cut in December, and an 11% chance of two rate cuts. 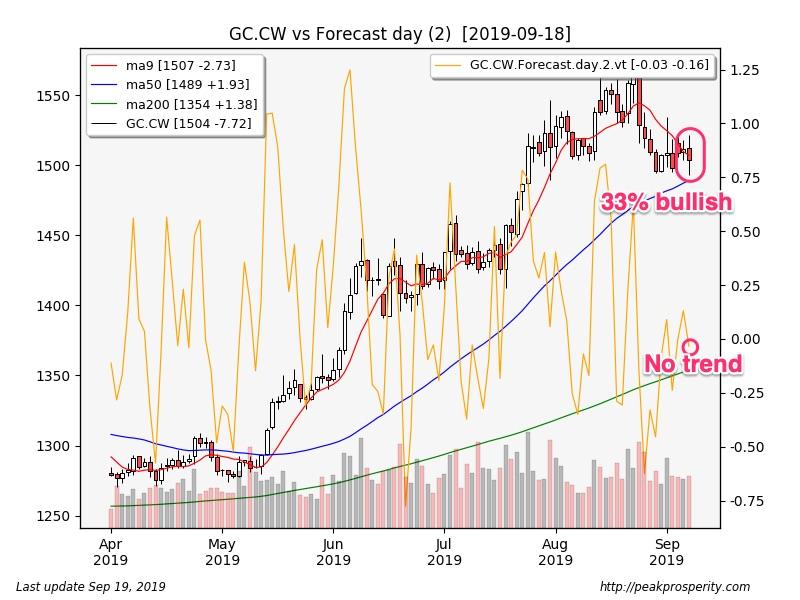 Silver moved lower into the FOMC announcement, plunged at the time of the announcement at 2 pm, but recovered somewhat by end of day. The opening black marubozu was bullish (38%), and forecaster fell but remains in a slight uptrend. Silver remains in an uptrend in both daily and monthly timeframes. 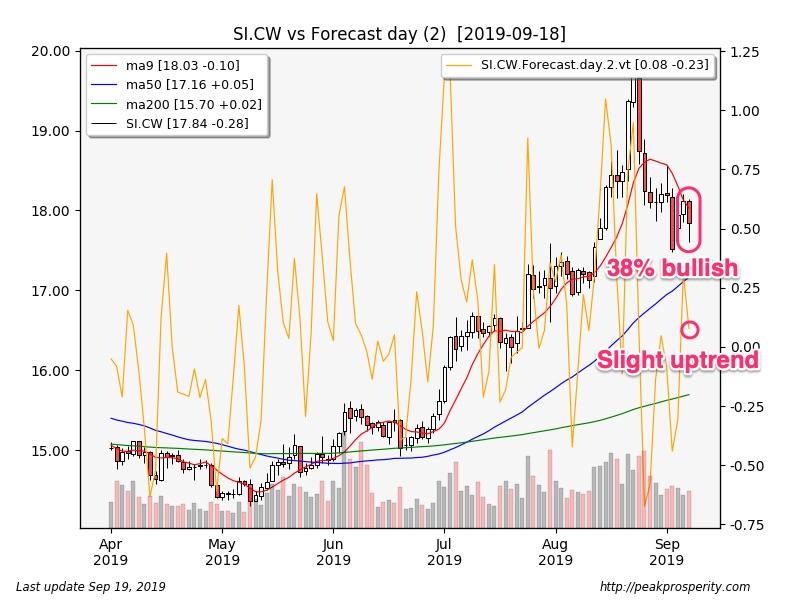 Miners chopped sideways until the FOMC announcement at 2pm when they sold off sharply, but managed to recover much of the losses by end of day. GDX fell -1.78% on very heavy volume, and GDXJ plunged -3.36% on extremely heavy volume. XAU fell -1.92%, the spinning top was mildly bullish (35%) and forecaster moved higher into an uptrend. XAU remains in an uptrend in the daily and monthly timeframes. 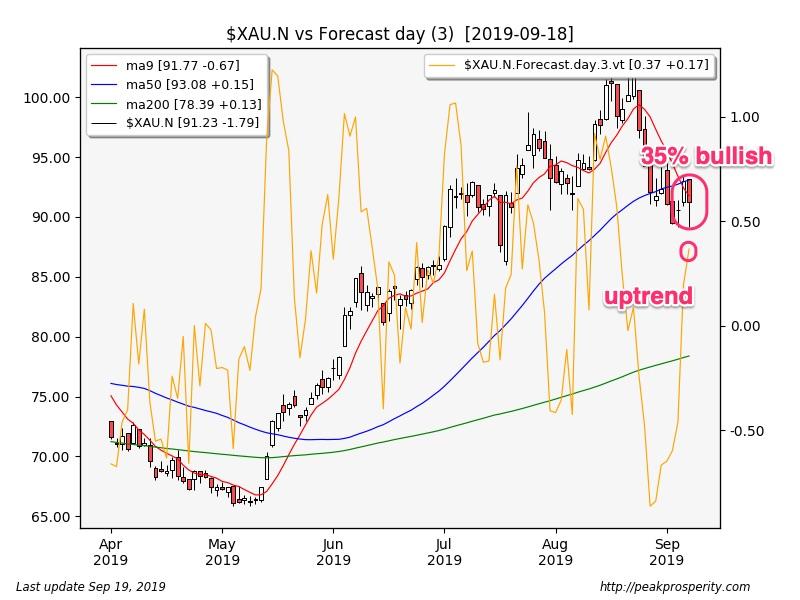 The buck rose +0.31 [+0.32%] to 98.10. The buck has done nothing but chop sideways fairly violently over the past 7 trading days. The opening white marubozu was unrated, and forecaster inched higher moving back into a slight uptrend. The buck is really searching for direction right now. DX is in an uptrend in both daily and weekly timeframes.

Large currency moves included: EUR [-0.39%], CAD [-0.33%], AUD [-0.54%], JPY [-0.31%]. Promising not to drop rates for the next 15 months probably was at least part of the reason why the buck strengthened today – most of the move happened immediately after the FOMC announcement at 2pm.  I’m not sure that’s what will really take place, however the buck seems to remain the … healthiest horse in the glue factory?  Something like that anyway.

Crude fell -0.33 [-0.57%] to 57.94. Compared to the rest of the market, crude didn’t do all that much. The EIA report at 10:30 am was mildly bearish (crude: +1.1m, gasoline:+0.8m, distillates:+0.4m) but the market actually rallied slightly after the news. The spinning top candle was mildly bullish (33%), but forecaster fell hard, moving crude into a downtrend. Even so, crude remains in an uptrend in both weekly and monthly timeframes.

SPX rose +1.03 [+0.03%] to 3006.73. The takuri line candle was was a bullish continuation, and forecaster inched lower but remains in a slight uptrend. SPX remains in an uptrend in both daily and weekly timeframes.

TLT rose +0.42%, the shooting star candle was a bullish continuation, and forecaster moved higher into an uptrend. TY was unchanged; the high wave candle was a bullish continuation, and forecaster inched lower but remained in a slight uptrend. TY remains in an uptrend in both daily and monthly timeframes. The 10-year yield fell -2.6 bp to 1.79%.  Over the last 3 days, bonds have looked a little bit like a cat bounce.

JNK fell -0.04%, the high wave candle was a bullish continuation, and forecaster moved higher into an uptrend. BAA.AAA differential rose +2 bp to +88 bp. Still no worries from the low-quality credit market.

So what’s the net-net of the FOMC meeting today?  The “data-dependent” Fed saw weakening global growth, a volatile trade situation, a strong domestic labor market, weakening business investment, and weakening manufacturing, and decided to cut rates one more time.  Just in case.  And certainly nothing to do with Trump and his constant whining about high US interest rates when compared to the rest of the world.

While PM took a small leg down, it wasn’t too dramatic.  However, the metals have not conclusively reversed back up, and neither have bonds.  The news just isn’t bad enough.

Where will things go next?  Well – the Fed giveth, and the Fed taketh away.  We got a rate cut but now they say no more cuts for another 15 months.  Supposedly.  Which I don’t believe.  And neither does the futures market.

There was one more takeaway: Powell said that if TSHTF (I’m paraphrasing here), we will not see negative rates in the US.  It will just involve money printing and “aggressive forward guidance.”  Just FYI.

Thanks for the write up Dave. Like Chris says, watch what they do, not what they say. With the July cut it was “One and Done” this cut wasn’t going to establish a “trend” of multiple rate cuts. Then, next meeting with press conference, another rate cut. Ooops, I lied. Now, “no more rate cuts for another 15 months”, but that’s not firm. Huh? It’s the typical double speak from the Fed. One and done, then cut rates at next meeting. No more rate cuts for 15 months, buuuuut, if we need to it’s on the the table. Sure thing Powelly boy. I expect the Trump whining to hasten as we get nearer the next election.

Lastly, real rates have been negative for years if you look at real life experienced inflation, not CPI. So that “no negative rates” is just BS. Yeah, we’ll take nominal rates to 0 and let inflation run hot, but no negative rates you see, we told you so, you filthy animals. The disdain for the public from these elites is astounding, it’s as if we’re all just a bunch of morons… or something.

And there you have it. Abject corruption that is in your face and undeniable with another case of the Financial-Political Complex protecting its own.

To anybody who thinks that similar corruption is not running rampant in virtually every single “”market”” (especially equities) I would politely suggest that you are clinging to a comforting belief system and not a defensible position.

The list of proven rigged &/or manipulated markets now includes all of them except equities.

Yeah, how likely is that?

Corruption in markets, local, state and federal governments.  On the local level in my city they are letting developers write zoning code amendments.  Total benefit to developers and local residents have to pay for infrastructure upgrades!

At the state level developers have lobbied and successfully started removing restrictions for unlimited growth.  Hell with the environment.

I will say people have slowly begun to wake up and get mad.

As has been stated on this site, the corruption seems to be EVERYWHERE!  It goes without saying that virtually every financial market is corrupt.  The alternative media constantly discusses this issue while the mainstream media remains conspicuously silent.  Where I’d like to see some light shine as well is on the insurance corruption issue.  As a recently retired self-employed health care provider, it has been very frustrating to watch our reimbursement steadily decline over the years, not only in inflation adjusted terms but also in nominal dollar terms as well.  When I look at my tax and financial numbers over the years, my reimbursement per patient has gone down, down, down while my bureaucratic workload per patient and expenses have gone up, up, up.  We’re told that healthcare is getting more expensive but no one that I know on the provider end has been seeing that represented in their pay check.  Quite the opposite in fact.

On the other hand, hospital administrators’ salaries have been steadily trending upwards.  And insurance company CEOs have seen their compensation packages absolutely skyrocket despite their bad behavior.  They’ve backdated stock options and been allowed to resign with a golden parachute.  They’ve denied payment to patients dying of cancer ensuring that the patients die sooner and therefore cost the insurance company less money.  They’ve nickled and dimed both providers and patients in every way imaginable.  And not one of them has been punished.  In fact, the previous administrative contractor for the VA (who supposedly won this contract through a bidding system) was run by a CEO who had been CONVICTED OF INSURANCE FRAUD!  So a convicted felon wins a government contract.  How does that happen?  To add insult to injury, we are still trying to get paid for patients we treated in 2016!  And to do this my billing person had to endure telephone hold times of 3, 4, and even 5 hours!!!  And then, if we are reimbursed, not infrequently the amount is incorrect and we have to resubmit and go through the whole process all over again.  The situation is costly and infuriating.  And from everything I’ve seen, it’s only going to get worse.  State insurance boards and legislators seem powerless to resolve the situation (and in many cases, are apparently complicit with it).  Litigation is out of the question since these companies have the resources to bleed you dry of money.

Based on history, I see only one solution to the problem and it’s one I’m not willing to discuss here.  When this all finally blows, it’s going to be very ugly and unfortunately, as always, many innocent people will wind up being hurt in the process.

And meanwhile back at the ranch, all we get is another “move along, nothing to see here.”

At some point this will break the back of ‘civil’ -ization.

After my daily dose of reality check I think it’s time to go out and see how the tater patch is doing. Fall is in the air and harvest season is upon us!

This reminds me of a conversation I had with a guy I used to know.  He said that a MD he used to go to told him about a group of local doctors that tried to set up a small scale health insurance program for the locals.  The big boys immediately swooped in and sued them out of existence Scientology style.

This corruption is the real tax.  A while back I set up an account in Peter Schiff’s Euro Pacific investment firm.  The regional manager told me about how the big investment firms would tell us “useless eaters” to invest one way while they would get their fat cat clients to do the opposite.  This was soon after I lost 65% following a big firm’s advice during the DotCom crash.  My 2008 losses were minimal since I had invested heavily in gold and silver.  The big boys were advising me to do the opposite.

That was 20 years and billions of dollars wasted on a project that was trying to do an extremely difficult task.  As a result those systems were extremely complex, fragile, and unreliable.  That didn’t stop President Cheney from deploying them in 2004.  It was his “Biggus Stickus” moment (a scene in a Monte Python movie).  Apparently he was stupid enough to think that the Russians were stupid enough to think it was a real system.