Once again, crude was front and center; Saudi Arabia’s energy minister held a news conference, and claimed that half of the disrupted output is back online, and the repair work would be completed by end of month. This caused the big plunge in crude today.

Gold chopped sideways, ending the day slightly higher. The short white/spinning top candle was neutral, and forecaster moved higher, moving into a modest uptrend. Today’s slight rally took gold back over its 9 MA. Gold is now back in an uptrend in all 3 timeframes.

Gold/Euros actually fell, dropping gold/euros into a daily downtrend. GC.EUR is now in a downtrend in the daily and weekly timeframes. Today’s gold/USD rally was just a currency effect; gold probably should have done better than it did. 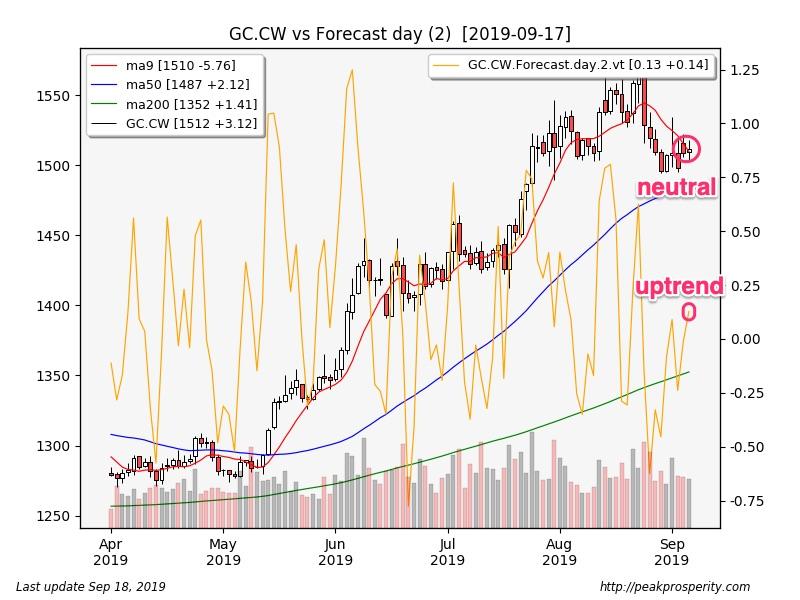 Silver chopped sideways in Asia and London, and then started to rally just after the US market opened. The long white candle was a bullish continuation, and forecaster jumped strongly higher, moving silver into an uptrend. Silver is now in an uptrend in both daily and monthly timeframes. 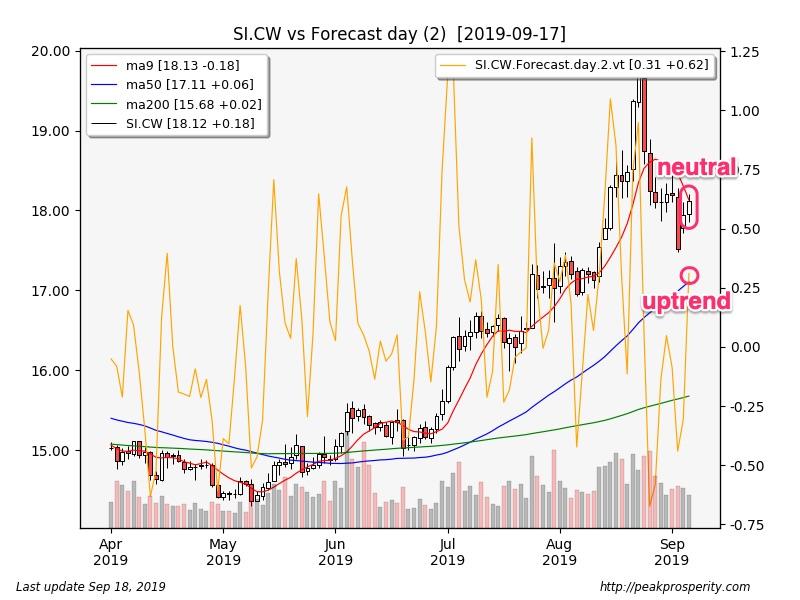 Miners rallied sharply in the first hour of trading, then chopped sideways for the rest of the day. GDX rose +3.04% on heavy volume, and GDXJ climbed +2.62% on moderately heavy volume. XAU moved up +2.66%, the swing low print was very bullish (60%), and forecaster shot higher moving into an uptrend. XAU is now in an uptrend in the daily and monthly timeframes. 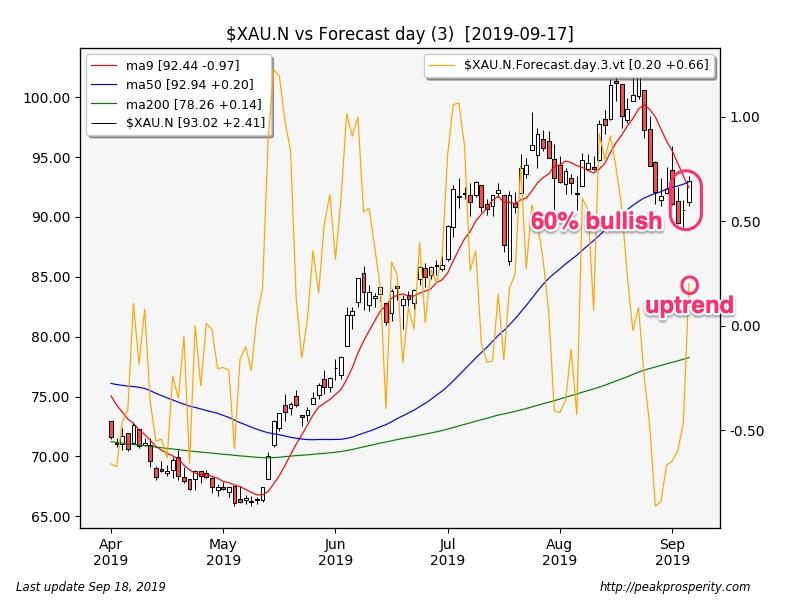 The buck fell -0.37 [-0.38%] to 97.79, almost erasing yesterday’s gains. The dark cloud cover was neutral, and forecaster moved lower, which was just enough to move the buck into a downtrend – although a very weak one. DX is in a downtrend in both daily and monthly timeframes.

Large currency moves included: EUR [+0.67%], GBP [+0.74%]. The UK Supreme Court overruled the Scottish court, saying that PM Johnson was entitled to suspend Parliament even if it was for political reasons. Which, clearly, it was. Did this cause the GBP & EUR rally today? Its hard to know. It could also have been driven by the drop in crude prices, which happened at roughly the same time.

Crude plunged -3.00 [-4.90%] to 58.27. Crude gave back about half of yesterday’s huge rally. The bearish engulfing candle was actually just a bullish continuation, and forecaster moved slightly lower but remains in a very strong uptrend. This was not a reversal for crude. Crude remains in an uptrend in all 3 timeframes.

SPX rose +7.74 [+0.26%] to 3005.70. The white marubozu candle was neutral, and forecaster move d higher, pulling SPX back into an uptrend. SPX is now in an uptrend in both daily and weekly timeframes.

JNK rose +0.07% – a new multi-month high for JNK. The doji candle was a bullish continuation, and forecaster inched lower but remains in an uptrend. Junky debt continues to move slowly higher, more or less along with equities. BAA.AAA differential remains at +86 bp. No worries from the low-quality credit market.

While it appears that at least silver and the miners are in the process of reversing, it can (and probably will) be unwound if the Fed decides not to cut rates tomorrow.  The fact that gold staged just a tepid rally even though the buck moved solidly lower suggests that gold isn’t very strong right now.  Gold/Euros is still in a downtrend.

What’s more, we saw a very strong INDPRO report today at 9:15; headline: +0.6% m/m, or +7.2% annualized, with manufacturing +0.5% m/m.  These numbers are expansionary, and the increase was enough to throw my INDPRO forecaster back into an uptrend.

With the US-China trade news improving, and now with a positive industrial production report, and Trump seemingly very reluctant to start a war with Iran (I shudder to think what HRC would have done), my guess is we may well not get a cut this time around.

Gold won’t like this very much, if this is how things play out.

I saw these articles suggesting nefarious PM trading at JP Morgan was institutional, and expected to see mention/comment here, but haven’t.

Already digested?  Or not a big deal?  Thoughts?

If it is one thing that would bring JimH out of retirement, I figured it would be this article.  But no.  🙂

Yeah, the prosecutors are calling them a criminal enterprise.  I don’t think anyone is surprised – except perhaps at the thought that banksters might actually go to jail for fraud for the first time in decades instead of just being “fined” some small fraction of the money they ended up making.

Perhaps now we can better understand why HRC got all that money for 30-minute “speeches” she gave to the various banksters through the years.  To me it appeared to be a cheap “criminal enterprise” insurance policy, so they could continue business as usual in order to avoid a risk of prosecution during Madam President’s upcoming reign.  Here’s just one example among many:

Goldman Sachs Representative Thanked Clinton For Her Courage In Continuing To Associate Herself With Wall Street After Crisis. “MR. O’NEILL: By the way, we really did appreciate when you were the senator from New York and your continued involvement in the issues (inaudible) to be courageous in some respects to associated with Wall Street and this environment. Thank you very much. SECRETARY CLINTON: Well, I don’t feel particularly courageous. I mean, if we’re going to be an effective, efficient economy, we need to have all part of that engine running well, and that includes Wall Street and Main Street.” [Goldman Sachs AIMS Alternative Investments Symposium, 10/24/13]

no one’s going to jail. It’s all Kabuki Theater.

Fed dropped rates 25 bp, surprising me a little bit, but the market-moving news was that they do not think rates will drop any more through 2020 – although Powell upon questioning didn’t want to look at this as a hardened view or a prediction.

The Enforcement Division of the CFTC runs a five-year investigation into silver price manipulation, only to immediately close the investigation once presented with irrefutable whistleblower evidence of said manipulation.

The head of the Enforcement Division, David Meister, quits the CFTC within a week of closing this investigation.

Meister then takes a job with Washington law firm, Skadden LLP.
Skadden LLP has been retained by Michael Nowak, former head of the JPMorgan precious metals desk, as his defense attorneys. The lead attorney defending Nowak is David Meister.

And there you have it. Abject corruption that is in your face and undeniable with another case of the Financial-Political Complex protecting its own.

On a related note, I thought Bill Holton’s commentary was amusing about not getting any phone calls or even an e-mail of apology from Harry Dent, Martin Armstrong, or Doug Casey telling them (i.e. Jim Sinclair and Bill Holton) that they had been correct all these years (about precious metals market manipulation).   I don’t expect Andrew Maguire will get any such communication either.

We had taken a South American cruise in 2016 and you run into a lot of interesting people on these cruises.  We wound up having lunch one day with a man traveling alone who was a PhD in mathematics who was previously in academia but now was working for the CFTC.  We had an interesting conversation.  Among the questions I asked him was one about the issue of precious metals manipulation.  He completely pooh-poohed the situation and essentially (wait for it) blamed the situation on gullible (i.e. dumb money) retail investors buying coins and feeling they were taken advantage of!!!  I just played dumb and kept asking questions.  He seemed sincere but I realize that with people in these circles, appearances mean next to nothing.  So he was either lying through his teeth (and assumed I was a complete idiot) or he was completely unaware of what was going on.  He didn’t have much positive to say about Bart Chilton but I couldn’t disagree with him there.  He wanted to talk again at a later time but it wound up never happening.  I wish I had his name and address to send the manipulation information to.  It’d be interesting to hear his response.