Gold gapped up at the open, and then mostly just chopped sideways all day long. The short black candle was a bullish continuation, and forecaster moved higher, but just short of moving into an uptrend. The move was enough to pull weekly forecaster into an uptrend; gold is now in an uptrend in both weekly and monthly timeframes.

Gold/Euros is in an uptrend in both daily and monthly timeframes. 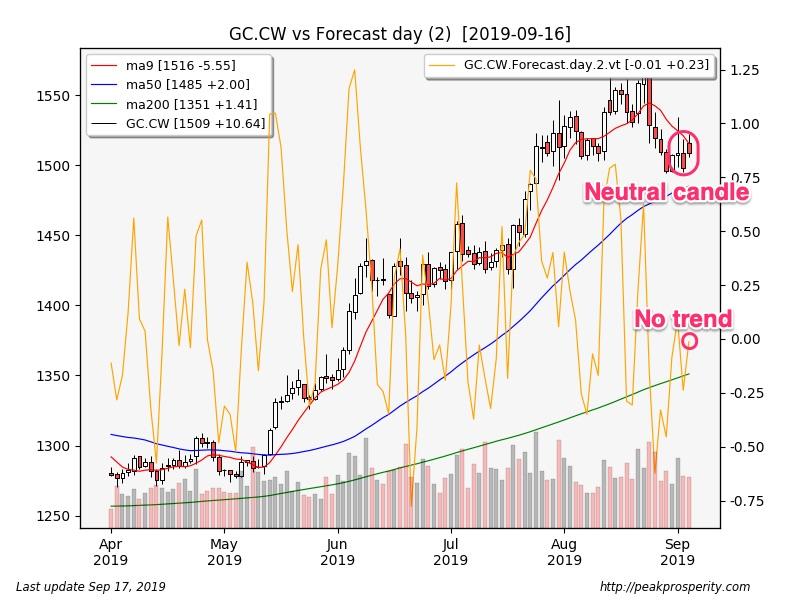 Silver gapped up at the open, spiked higher in Asia, and then chopped mostly sideways for the rest of the day. The bullish harami was definitely bullish (47% – a high rating for this pattern), and forecaster moved slightly higher but remains in a downtrend. Silver is in a downtrend in both daily and weekly timeframes. 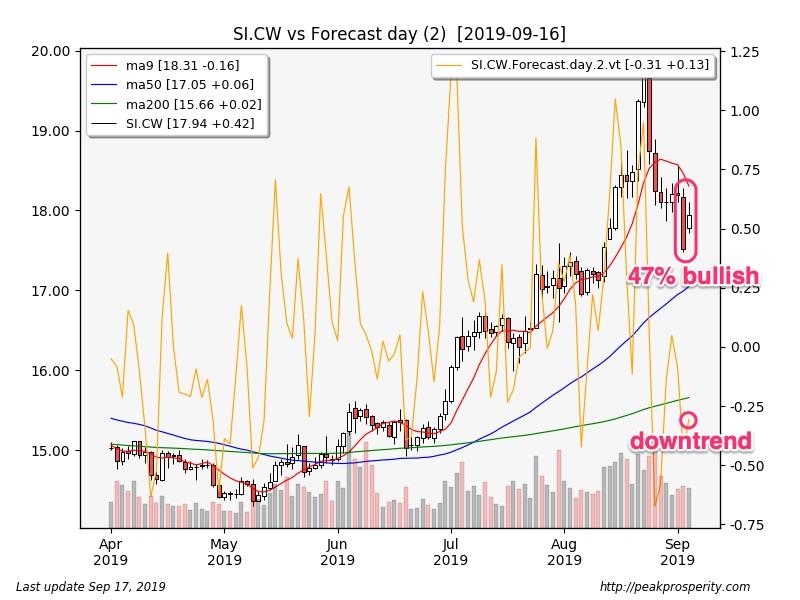 Miners gapped up at the open, and then chopped sideways for the rest of the day. GDX rose +2.44% on x volume, while GDXJ jumped +3.06% on y volume. XAU moved up just +1.25%, the long legged doji was a bullish continuation, and forecaster moved higher but remains in a downtrend. XAU remains in a downtrend in both daily and weekly timeframes. 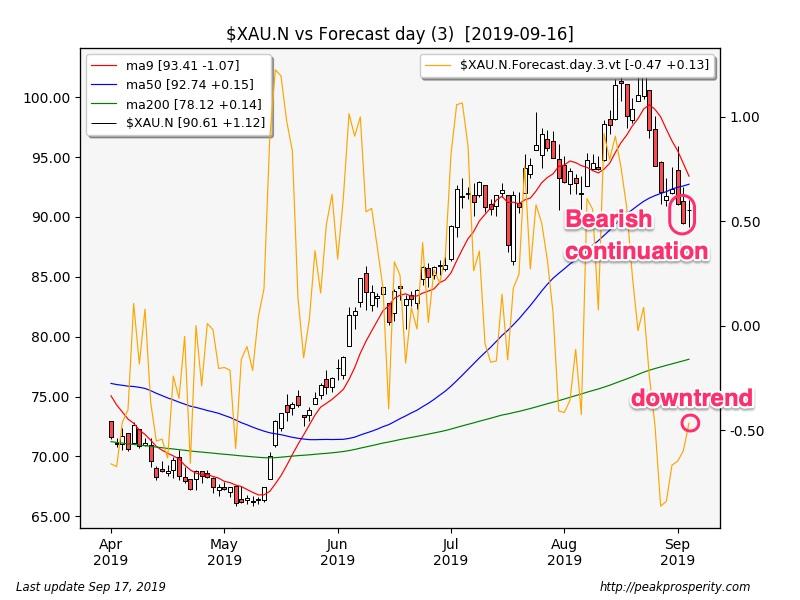 Platinum fell -1.21%, palladium dropped -0.34%, while copper plunged -2.34%. Copper fell all day long – there was no specific trigger for the move lower that I could see.

The buck rose +0.33 [+0.34%] to 98.16. The swing low pattern was very bullish (66%), and forecaster inched higher and remains in a slight uptrend. DX remains in an uptrend in both daily and weekly timeframes.

Large currency moves included: EUR [-0.70%]. Part of the reason for the drop in EUR was a decision by the WTO that ruled the EU had provided illegal subsides to Airbus, and the concern is that the US will respond with tariffs on $21 billion in exports to the US.

Crude shot up +6.58 [+12.03%] to 61.27. Crude gapped up at the open, then traded in a wide range during the trading day. The confirmed bullish NR7 was bullish (46%) and forecaster screamed higher, moving into a strong uptrend. Today’s move pulled crude into an uptrend in all 3 timeframes.  Crude also broke out above the previous high set back in June.  Volume was extremely heavy.

Various parties rushed to reassure the world that everything would be fine.  Trump authorized a release from the SPR, and Saudi Arabia said it could meet its near-term contract obligations with its oil in storage.  Aramco will be providing a status report within 48 hours – hopefully telling us all how long the oil processing plant will be offline.  Lastly – OPEC does have some spare capacity, although not nearly enough to plug the 5.7 mbpd hole left by the attack.

And I’d like to know just exactly what sort of drone it was.  Remote-controlled?  Or autonomous?  If the drones could navigate themselves to a pre-selected target before blowing up – and certainly that sort of thing is technically possible – this could just be the first of many such attacks.  And not just in Saudi Arabia. 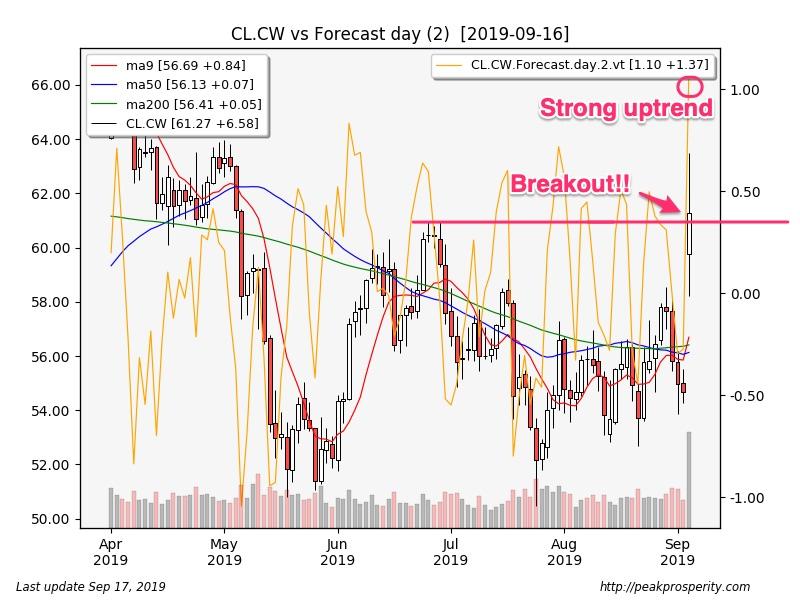 SPX fell -9.43 [-0.31%] to 2997.96. The gap down doji was a bearish continuation, and forecaster moved lower into a slight downtrend. SPX is now in a downtrend in both daily and monthly timeframes.

JNK jumped +0.32%, the long white candle was a bullish continuation, and forecaster jumped back into an uptrend. BAA.AAA differential ended last week at +86 bp. No worries from the low-quality credit market – even after all the back-and-forth following the ECB meeting.

The attack on the Saudi oil refinery has catapulted crude oil to the top of the heap in terms of impacts and prices. There seems to be a relatively mild flight to safety (looking at the reaction of both bonds and gold), while the plunge in copper prices suggests that this won’t be good for the global economy. I suppose that’s not surprising.

Even so, neither gold, silver, or the miners have convincingly reversed direction yet.  Gold is the closest – and even it is really just in a state of “no trend” right now more than anything else.  Part of the problem pulling gold lower is the fading hope for a rate cut; odds have dropped down to 66%.  A US-China trade deal looks increasingly likely; even if it is just an “interim” deal, its pretty clear that both sides want to do something.  An op-ed in SCMP suggests what might be motivating China: the Democrat field appears to be less pliable than the Chinese were hoping for.

Will the price of crude and increased tensions with Iran be a new “cross-current” for Powell and his Fed?   Will it overpower the fading US-China trade cross-current?  So far, gold is suggesting maybe not.

We will know soon enough.  The FOMC meeting starts tomorrow, with the press conference on Wednesday at 2:30 pm.

I am hearing on ZH that there is something big happening concerning Repo-rates.  (and here and here)   But I don’t know enough about finance to understand what this means and its significance.

DaveF or Chris, anyone care to post a “Repo Rates for Dummies” explanation.  Much appreciated if either of you want to take this on.

Hey Sand_Puppy, same here. Zerohedge definitely is indicating what’s going on with repo rates is a really big deal: “Today’s “Watershed” Repo-calypse Is “One Of The Worst Things That Can Happen”.

And I’m also right with Sand_Puppy in admitting I don’t know enough (anything) about repo rates, and so would sure like someone knowledgeable in them to give us their take on what’s going on. This linked article has certainly gotten my attention…

Here’s an excerpt from the Zerohedge article referenced in #3 above:

As Bloomberg reports, today’s surge in Treasury repo rates poses a threat to the market more broadly because traders won’t take new positions without confidence in their ability to obtain funding at consistent rates, said John Fath, managing partner at BTG Pactual Asset Management and a primary dealer trader from 1993 to 2008.

“Today was a bit of a watershed event, though we’ve been seeing this brewing. When they set funds rate target at 2 to 2.25, ideally you would like to funding to be around 2.15. For weeks it’s been above that.

“Today was more dramatic. Funding opened at 4.5, quickly moved to a high of 10, then dropped back to 2.50, nothing close to 2.15. So you’ve lost control of where you want financing.

“Overnight financing is the key to driving the economy, leverage. If you don’t have control over it, what’s the point of setting a funds rate? If they ease tomorrow and funding is at 4%, does it matter if they eased?

“If the plumbing doesn’t work, then it’s going to dramatically affect secondary trading of Treasuries. Which is the last thing they need when there’s massive issuance going on.

“This is without a doubt one of the worst things that can happen. In many respects it overshadows the Fed moving tomorrow, because if the plumbing doesn’t work everything starts to break down. Everything is predicated upon your getting a reasonable funding rate. Otherwise why would you buy this paper to begin with. If you’re funding your overnight position at 6 why would you buy a 10-year at 2?

“Today’s funding market was more emblematic of what goes on in emerging markets rather than the largest developed debt market in the world. The bid-offer spread in repo should be a couple of basis points. At 7am it was 100bp. It was moving in increments of 50bp up and down. Dealers weren’t quoting pricing in terms of size. That alone is suggestive of a market that’s broken in the short term. The Fed would’ve been proactive by intervening at that point. By intervening at 10, it’s too late. Most people need funding by 8:30. They didn’t even get to the targeted amount, because it was just too late. The damage was done. If you’re a foreign investor seeing rates all over the map it doesn’t reinforce your viewpoint that things are working well.

“A number of people have called asking what it’s going to look like tomorrow. These shouldn’t be issues for the marketplace. Why would you initiate putting on new positions, trading in secondary market, if you were concerned about how consistent funding’s going to be going forward. It’s just a settlement date — what’s year-end going to be like? These are questions people have asked me, in panicked way.

“It’s a bigger deal than a rate cut by far. It’s meaningless if you put in a rate cut and overnight financing reflects nothing of that rate cut. Which is what’s happening right now. I’m surprised they let this get out of hand.”

Oops, talk about not leading with the headline. I just realized I left out the intro to the excerpt from the ZH article, above:

While it is being ignored by most (because the S&P didn’t crash), the chaos in the Fed-controlled short-term liquidity markets should panic everyone as for the first time in a decade, NYFRB was forced to inject liquidity for o/n repo…

Sorry about that…I miss being able to edit posts!

Not being able to edit posts is painful…..

a) if participants don’t have enough loose cash lying around to lend, or

b) they are reluctant to lend the cash they have for some reason.

Supposedly, a large treasury auction last week sucked up a bunch of cash, followed by corporations emptying their bank accounts to pay quarterly taxes to the government.  Allegedly a perfect storm – in other words, (a) above.

The Fed can fix this cash deficit by running out and buying short term Treasury bills from the participants.  This adds cash into the system, which can then be lent out.  Presumably this would just be needed as a temporary fix – its called “adding liquidity” and is actually money printing.

That’s as I understand it anyway.

The Fed can fix this cash deficit by running out and buying short term Treasury bills from the participants.  This adds cash into the system, which can then be lent out.  Presumably this would just be needed as a temporary fix – its called “adding liquidity” and is actually money printing.

Which is is basically what they did yesterday, correct? A friend of mine in the private sector who deals with these things says that the repo rate between private parties still spiked higher yesterday, despite the Fed.