The release of the news regarding the invitation to negotiate resulted in a spike higher in gold, silver, platinum, and copper.

Trump has yet to actually impose tariffs on the $200 billion in Chinese imports; that decision is pending. The comment period is over, and Trump can pull the trigger on the tariffs whenever he decides it is appropriate to do so. That likely dictated the timing of the invitation to negotiate. The whole thing does seem fairly well choreographed.  In retrospect, that is.

Gold mostly chopped sideways until about 8 am; it rallied slowly until about 11:10, when it suddenly spiked up $8 on the trade negotiations news. Candle print was a flurry of bullish patterns, which confirmed the hammer candle from yesterday (56% bullish reversal). Forecaster shot up +0.36 to +0.46, which is a strong uptrend. Gold is now back above its 9 MA. Gold remains in a downtrend in both the weekly and monthly timeframes. 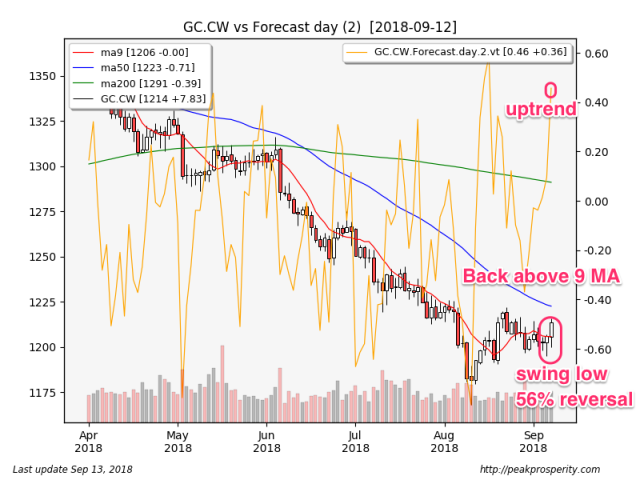 Silver chopped sideways until 11:10, when it spiked higher on the trade negotiations news. Silver’s candle print was also a bunch of bullish patterns (71% bullish reversal), which confirmed yesterday’s bullish high wave. Silver ended the day right at its 9 MA. Forecaster jumped +0.12 to +0.11, which is a buy signal for silver. Silver is in a downtrend in both the weekly and monthly timeframes. Was yesterday’s spike down a headfake? Did the bankers get the word from the inside about the restart?

The gold/silver ratio fell -0.17 to 84.88. That’s somewhat bullish for today, and the current level for the ratio suggests PM could be at or near a long term low. 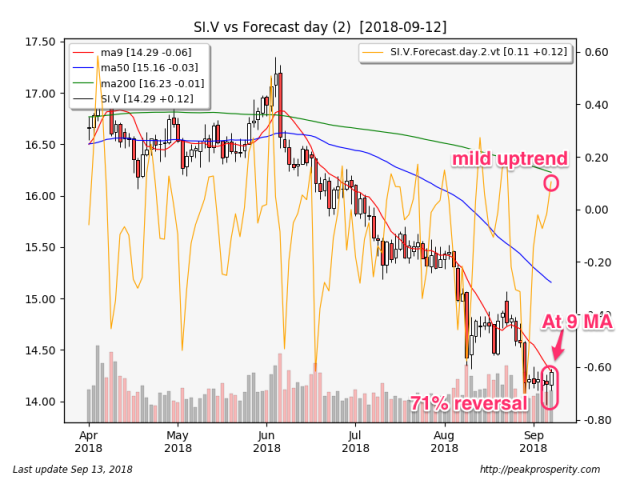 Miners charged higher today, rallying from the open through mid-afternoon. GDX rose +3.07% on extremely heavy volume, while GDXJ climbed +3.48% on extremely heavy volume also. XAU jumped +3.46%, printing a variety of highly rated bullish reversal candles (70% bullish). Forecaster jumped +0.48 to -0.01, which is almost a buy signal, but not quite. XAU remains in a downtrend in the weekly and monthly timeframes. 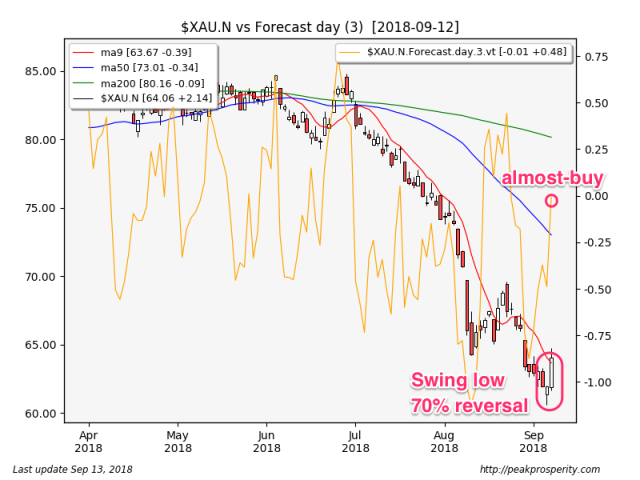 Platinum rose +1.06%, palladium moved up +0.01%, and copper shot up +2.26%. Clearly copper was the big winner of the day, and most of the move happened at 11:10 am. All 3 metals are now back in uptrends, with both copper and platinum issuing buy signals as a result of today’s move.

The buck fell -0.47 [-0.50%] to 94.39. Some of the move was related to the trade negotiations restart, while other moves (such as the Euro rally) was not. The long black candle was neutral, while forecaster dropped -0.18 to 0.0, which is a sell signal for the buck. The move took the buck below both the 9 and 50 MA lines. Buck is in a downtrend in both the daily and weekly timeframes.

Based on today’s moves, it looks as though the trade negotiations restart will probably lead to a drop in the buck, and a corresponding rally in the emerging markets currencies, as well as the commodity currencies of Canada and Australia.

Crude rose +0.50 [+0.72%] to 70.02. That sounds like a strong day, but crude actually hit 71.26 as the day high following a relatively strong EIA report (crude: -5.3m, gasoline: +1.3m, distillates: +6.2m), but the rally didn’t hold, with crude losing all of its post-EIA-report gains by the close. The long white candle was a bullish continuation, and forecaster rose +0.10 to +0.59. Crude remains in an uptrend in all 3 timeframes. The failed rally may have been caused by OPEC’s “MOMR” (Monthly Oil Market Report) which revised down world oil demand growth by 20kbpd due to lower than expected economic activity in Latin America and the Middle East.

JNK shot up +0.22%, a strong rally for JNK, which is back now in a relatively strong daily uptrend. That’s a risk-on signal.

I’m showing a wave of triple-RSI buy signals across the miners, and also in silver and platinum also. The metals sector map is also showing an MA9 crossing for every component except silver. I’ve been waiting for a break in the tariff fight with China. This looks as though it could be it.

My guess is, Trump has choreographed the negotiations with China almost perfectly. Look where we are. The deal with Mexico is basically done, with Canada not far behind. Europe is no longer available for China to run against the US. The US stock market is near all time highs, the US economy is doing great (thank you, debt-funded tax cut stimulus), China is beginning to move into recession, the SSEC is down 33% from the 2018 highs – which no doubt annoys the rich people in China – and now Trump has the power to impose tariffs on $200 billion in Chinese imports whenever he feels like doing it.

And now he invites the Chinese to negotiate.

Did Wall Street know about this timing – and the overall choreography? Let’s see. Commercials are net long silver and gold, which is a very rare thing. Managed money is leaning way over the edge of the rail short. The big banks are definitely prepared for something to break right around now. And they have friends located all throughout the administration. Friends who will need jobs once Trump is gone from office. Yeah, I’d say they knew.  Or they figured it out.

We have a buy signal, for the miners, and for the metals, while the COT report is as bullish as it gets. That’s about as plain as I can put it. It probably won’t be a straight shot higher, but unless China declines the invitation (and Trump responds with the obvious counter-move), I think commodity prices move higher from here.

It kind of feels like an offer they can’t refuse.  If they do – it certainly would give Trump the excuse he needs to impose the tariff package.  Without an excuse, Trump would look like the bad guy.