Gold moved steadily higher all day long. The short white/NR7 candle was unrated; forecaster jumped higher but remains in a slight downtrend. Gold remains in a downtrend in both daily and weekly timeframes.

Gold/Euros also remains in a downtrend in both daily and weekly timeframes. 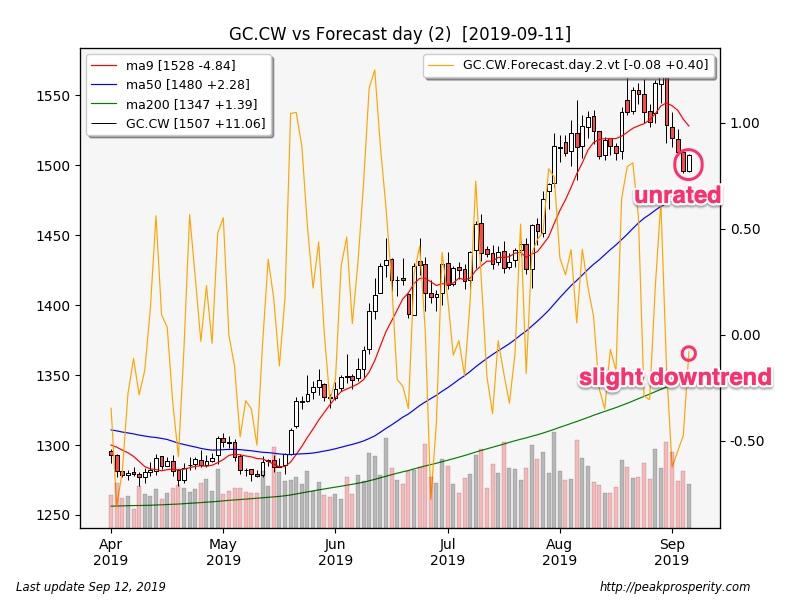 Silver chopped sideways, ending the day at the higher end of its trading range. The spinning top was mildly bearish, and forecaster moved higher but remains in a downtrend. The rally was enough to pull silver weekly forecaster back into an uptrend; that leaves silver in an uptrend in both weekly and monthly timeframes. Silver was close to a swing low, but couldn’t quite hold its gains through end of day. 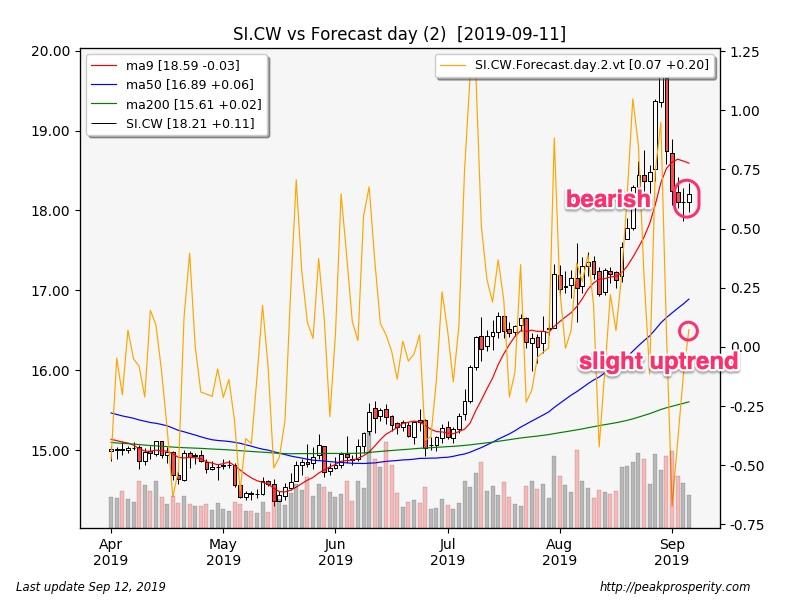 Miners rallied in the morning, then gave most of it back in the afternoon. GDX rose +0.76% on heavy volume, while GDXJ climbed +0.48% on heavy volume also. XAU rose +0.64%, the high wave candle was bearish, and forecaster moved higher but remains in a strong downtrend. Like silver, XAU was unable to print a swing low. XAU remains in an uptrend in both weekly and monthly timeframes. The inability of the miners to hold onto their gains wasn’t a great sign. 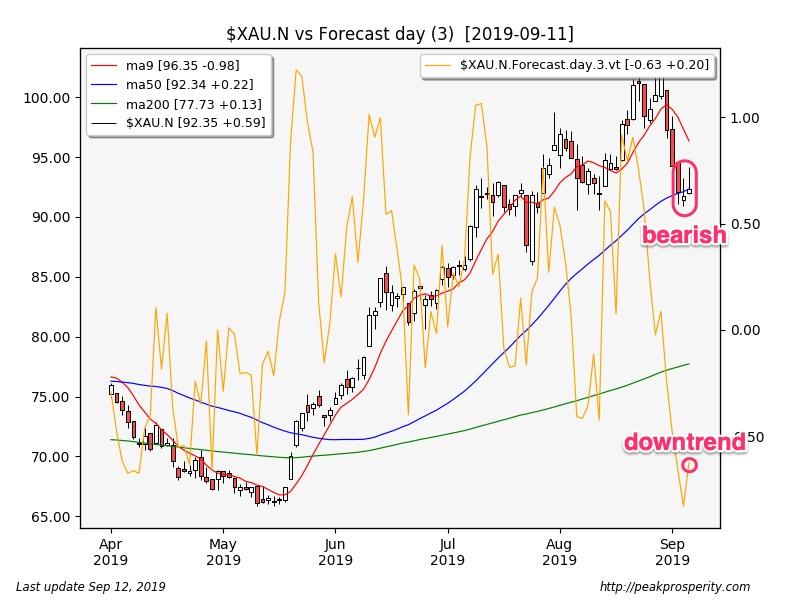 Crude plunged -1.85 [-3.21%] to 55.80. A bullish-looking EIA report (crude: -6.9m, gasoline: -0.7m, distillates: +2.7m) didn’t seem to help much; in fact, crude continued moving lower after the report was released, with a large (> $1) spike down at 11:40 am. That’s probably some news event (like perhaps “Trump taking a softer line on Iran”) but I don’t have a time-dated newsfeed so I can’t be sure. The swing high candle print was bearish (45%), and forecaster fell, moving crude (just barely) into a downtrend. This puts crude in a downtrend in the daily and monthly timeframes.

TLT fell -0.18%, the doji candle was somewhat bullish (+40%), and forecaster moved lower and remains in a downtrend. TY moved up +0.02%, the short black/spinning top was somewhat bullish (36%), and forecaster inched higher but is still in a strong downtrend. TY remains in an uptrend in the weekly and monthly timeframes. The 10-year yield rose +3.1 bp to 1.73%.

JNK was unchanged, the doji/NR7 candle was unrated, and forecaster fell but remains in an uptrend. JNK isn’t supporting the risk on picture painted by equities. BAA.AAA differential fell -3 bp to +87 bp. No worries from the low-quality credit market.

Gold and silver bounced today, but bonds continued moving lower. Miners bounced slightly, but looked weak. Will the ECB cough up the expected money-printfest tomorrow? The market doesn’t look all that convinced.  And all that potential for peace to break out in the middle east is negative for crude oil prices.  Iran’s 2 mbpd coming back online would…boy.  It wouldn’t be good for crude.  OPEC+ is starting to talk about more cuts.

Still, downside momentum for the metals seems to be slowing. Its hard to say what happens next.

Every day, miners seem to gain out of the gate and then sell off the rest of the day.  I noticed this same thing happening in 2016 after they had their big run…then they collapsed.  Not saying that will happen this time, but it isn’t a good sign IMO.  The other thing I have noticed also is that in 2016, they were having monster up days.  Then, they might have a few big down days, but they would quickly recover and move sharply higher again.  That isn’t happening this year.  They have been lagging the “new gold bull market”.  They’ve just grinded higher, almost reluctantly.  I feel like that is a red flag.

The European Collection of Buffoons has just announced a new round of QE, simultaneously starting some verbal ping pong with Trump. No helicopter money, as far as I can tell from their communique, or from Draghi’s words. In fact, that nice Mr Draghi says, with his best “I’mma break it down for y’all thus” face:

We are very concerned about the pension industry and related services. Negative rates are necessary instruments of monetary policy. It has created a lot of positive effects.

“Positive” for whom, exactly?

They have been lagging the “new gold bull market”.  They’ve just grinded higher, almost reluctantly.  I feel like that is a red flag.

Even after this selloff, GDX is still up 50% from the Dec ’18 low.  How, specifically, are they lagging?

Bull markets try to shake off as many people as possible.

My $0.02:  Hold on to your core position until we’ve –at least– gotten back to the 2011 highs.  If you’re so inclined to trade based on “feelings” only do so w/ a small portion of your portfolio.

Be right and sit tight. 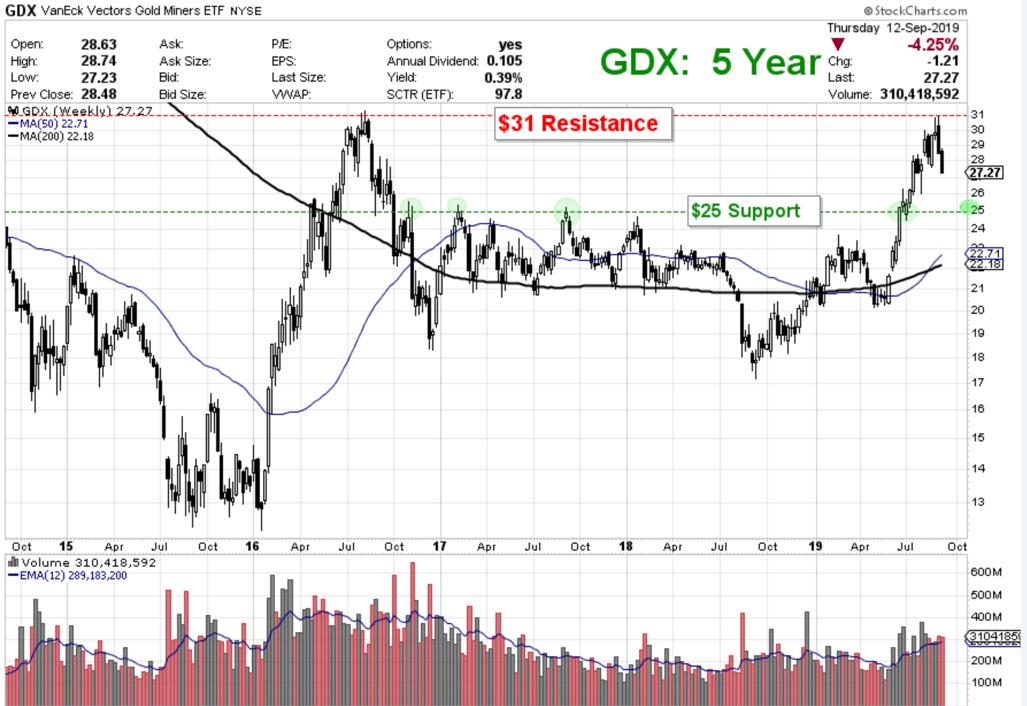 ^ Good post.  You’re right about be right and sit tight.  I haven’t sold a share and don’t plan to.  I guess what I mean is really this:  this move has not been nearly as dramatic as the previous one…granted, they were coming off the lows.  And also, gold got over $1550 and the miners were only at 2016 highs, when gold was quite q bit lower.  Also, silver was rocking then.  Yes, all of that reversed in short order.  Maybe that won’t happen this time.  We will see.  I just find it a little disconcerting that gold has made such a strong move and miners have lagged that in relation to the last move in the metals market.  That and silver lagging just give me pause to jump on the new bull market bandwagon with both feet.

Thank you for your daily thoughts on PMs and the markets.   I’ve been “in” physical PMs (Ag/Au) for about a decade and have seen the ups and the downs.   Ive also seen many other commenters come and go, yet you’re solidly here.  My thanks to you are long overdue.

One question has always occurred to me and today I thought I’d ask:  When you say, like today, that “The gold/silver ratio rose +0.11 to 82.77. That’s slightly bearish.”  Or, when it falls, that it’s bullish, are you meaning that it’s bearish/bullish for PMs in general, for Au over Ag, or Ag over Au, or just what?   Should the ratio be read in conjunction with the forecasters for each metal (both in downtrend, but up, today)?  Just curious.  Same questions for GDX/Au ratio, although I’m not in miners.   Thanks for your reply.

Same thing with the gold/XAU ratio.  Miners rise faster than gold in an uptrend, and they fall faster than gold in corrections and downtrends.  Same thing with the GDXJ:GDX ratio.  GDXJ is a “risk asset” in the PM space, as is silver, while gold is a “safe haven” asset, so when money flows to “PM risk” its a sign that traders are wanting to go far out on a limb in the PM space.

And that’s generally bullish for PM, although “max limb” can be a sign of a top too.

Ultimately these are all minor indicators which, along with other indicators, can be used to paint a rough picture of current sentiment.

Forecasters – they are attempting to project what the near-term trend will be in the next 1-2 time periods, based on how the item has performed historically.  So monthly forecaster attempts to project where price will go over the next 1-2 months – up, flat, or down.

They are the result of a neural network model that uses inputs that have resulted in “good answers” over the history of the series.

After the recent selling in the miners, XAU monthly forecaster still projects a (mild) uptrend for the next month or two, but the momentum is clearly slowing.

Of course, if “things are different this time”, then the model ends up giving bad predictions.  This could happen in cases like we have now in the junky debt market – which has been wanged around by the ECB so badly that junky debt remains very well bid regardless of any worry about an upcoming recession.

I’ve removed junky debt from most of my models as a result.  Are there any other things like this?  Probably.  So take all those forecasts with a big grain of salt.

“Not meant to be financial advice” 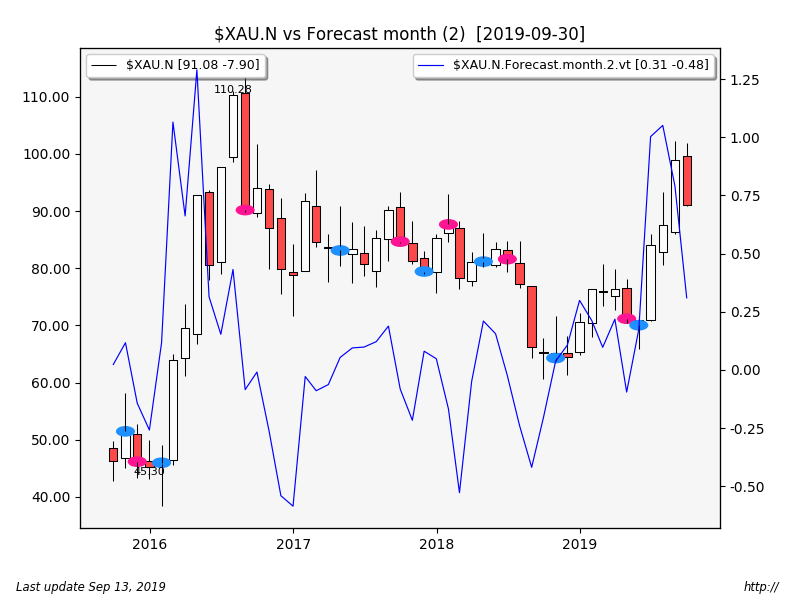