Gold/Euros is also in a downtrend in both daily and weekly timeframes. 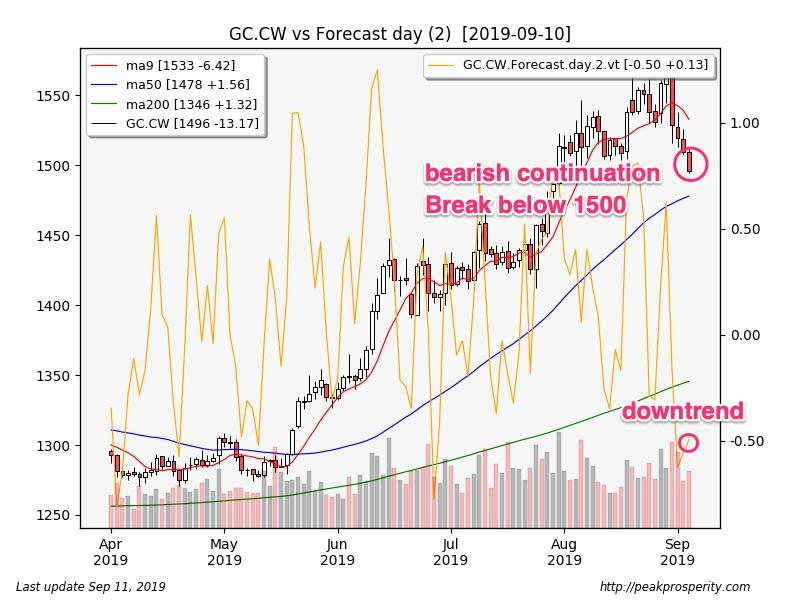 Silver mostly just chopped sideways. The long legged doji was a bearish continuation, and forecaster jumped higher but remains in a mild downtrend. Silver remains in a downtrend in both daily and weekly timeframes, although the trends are weak.  The doji looks potentially positive, but no reversal yet. 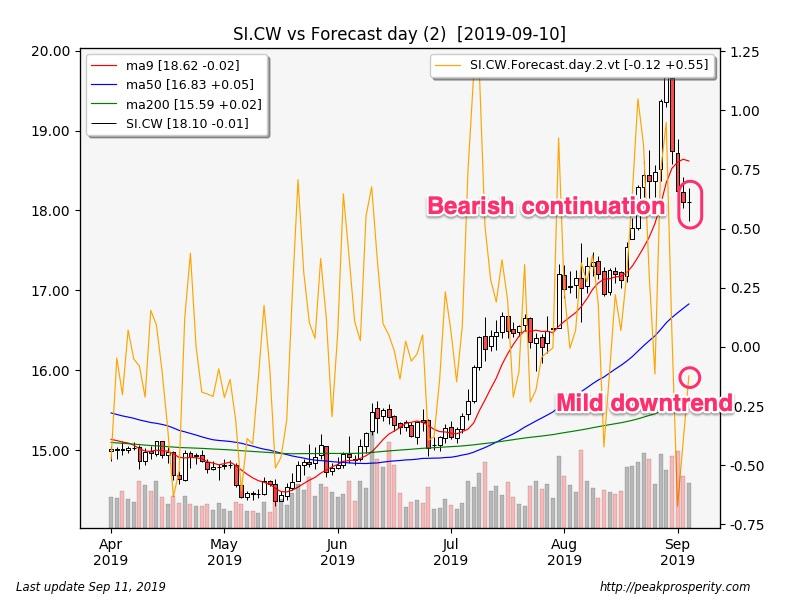 The miners tried to rally but the rally failed. GDX fell -0.79% on heavy volume, and GDXJ dropped -0.68% on moderately heavy volume. XAU moved down -0.36%, and forecaster dropped deeper into a downtrend. XAU remains in an uptrend in both weekly and monthly timeframes. The modest drop in the miners on a day when gold was hit reasonably hard actually seems to be good news to me – but no sign of a reversal yet.

The buck rose +0.05 [+0.05%]. The doji/NR7 candle was unrated, but forecaster moved higher and is now in a slight uptrend. DX is now in a uptrend in both daily and weekly timeframes, but the trends are relatively weak.

Crude fell -0.17 [-0.29%] to 57.65. Crude had actually rallied to new highs [58.76] but news of Bolton’s firing (resignation?) caused crude to tank. The high wave candle was a bullish continuation, and forecaster dropped but remains in an uptrend. Crude remains in an uptrend in both daily and weekly timeframes.

TLT plunged -1.75%, the third day of heavy selling in bonds. The closing black marubozu was a bearish continuation, and forecaster moved slightly higher but remains in a downtrend. TY dropped hard too, losing -0.63%. The long black candle was a bearish continuation, and forecaster dropped hard and is now in a very strong downtrend. In spite of the drop, TY remains in an uptrend in the weekly and monthly timeframes. The 10-year yield rose +8 bp to 1.70%.

JNK fell -0.05%, the short black candle was somewhat bearish (40%), and forecaster inched lower but remains in a strong uptrend. BAA.AAA differential was unchanged at +90 bp. Still no worries from the low-quality credit market.

Not much happened today; it does seem as though there is building momentum for a trade deal with China, which is causing the Fed rate cut projections to fall. This appears to be hitting gold, although the mining shares are holding up relatively well, as is silver.  No reversals yet, but the momentum of the 4-day correction does appear to be slowing.

I’m still focused on what the ECB will do next.  Meeting & press conference will conclude before the US market opens on Thursday.  It could be exciting!