Gold traded in a narrow range, printing a doji candle which might mark a low (36% chance); forecaster agreed somewhat, rising +0.05 to +0.08. That’s a slight uptrend on the daily chart.  Gold remains in a downtrend in the weekly and monthly timeframe. There was no material change today. 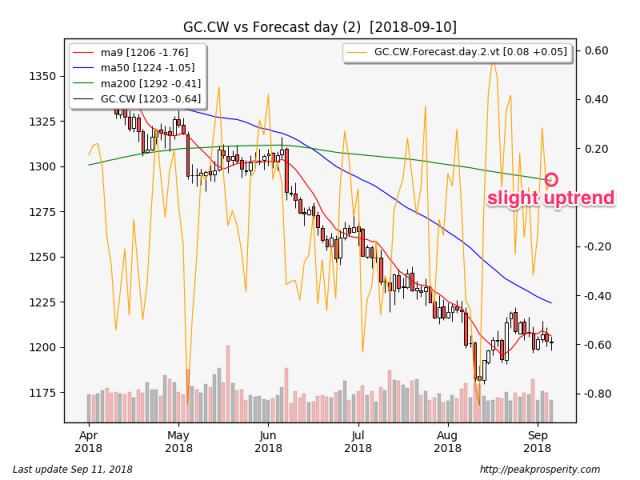 Silver chopped sideways in a very narrow range; the spinning top candle was unrated, while forecaster fell -0.12 to -0.01. That’s a (very mild) sell signal for silver. Silver is in a downtrend in all 3 timeframes.

The gold/silver ratio fell -0.05 to 84.59. That’s neutral for today, but the current level for the ratio suggests PM could be at or near a long term low. I’ve said that for a few days now, but it remains true. Other than the 1990-1993 time period, this is the highest value for the gold/silver ratio from 1975-present. 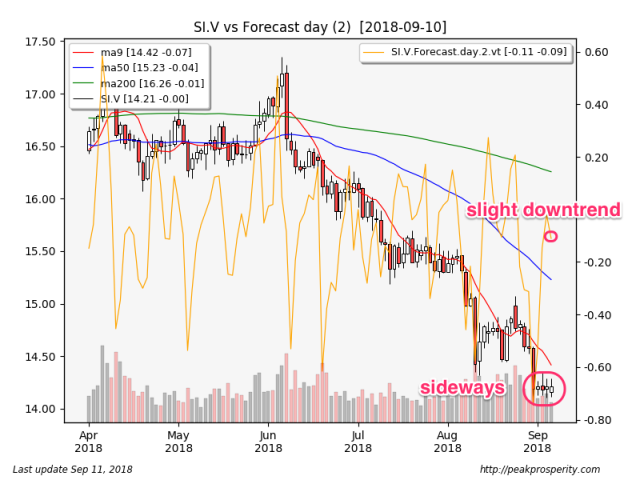 Miners fell today, with GDX down -1.51% on moderate volume, while GDXJ dropped -1.45% on moderately heavy volume. XAU plunged -1.78%, making a new low by a few pennies. The closing black marubozu was a bearish continuation, but forecaster jumped +0.15 to -0.36. That’s still a downtrend, but one that is slowing at least to some degree anyway. XAU remains in a downtrend in all 3 timeframes. 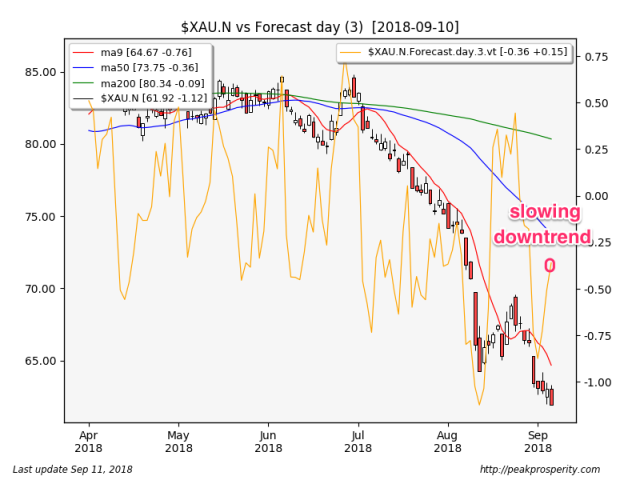 Platinum rose +0.58%, palladium edged down -0.11%, while copper moved up +0.31%. We could say it was a mildly positive day for the other metals, but nothing material happened.

The buck -0.23 [-0.24%] to 94.76. Mostly this was about the Euro, which rose +0.22% due to positive noises about BRExit; the EU BRExit negotiator Barnier said that a deal is “realistic” within the next two months. GBP has been moving slowly higher over the past few weeks, and it popped +0.86% today. The primary issue remaining is the question of the Northern Ireland border.

Crude moved down -0.26 [-0.38%] to 67.34. Crude tried to rally today and failed, with the shooting star candle a bearish continuation. Forecaster edged down -0.03 to -0.11. Crude is in a downtrend in the daily and weekly timeframes. API report comes out after market close tomorrow.

SPX rose +5.45 [+0.19%] to 2877.13. SPX had a narrow trading range today, with all the gains coming in the futures market overnight. SPX is in a downtrend in the daily timeframe, but remains in an uptrend on the weekly and the monthly. Really, not much happened today. Industrials led (XLI:+0.52%) along with utilities (XLU:+0.50%) while sickcare brought up the rear (-0.26%). Call this map mildly bearish.

SSEC fell -1.21%, dropping down close to the multi-year low; the Chinese market overall is down 33% from peak.  At least from the equity market perspective, “trade wars are easy to win.”

TLT rose +0.37%, printing yet another swing low (66% bullish), but forecaster has yet to issue a buy signal. TY rose just +0.02%, and it too remains in a downtrend, although just barely. TY remains below all 3 moving averages, and is in a downtrend in the daily and weekly timeframes. The 10-year yield fell -0.5 bp to 2.94%.

JNK rose +0.20%, printing a swing low and a forecaster buy signal; TSLA had some good news – Musk sent a positive email to employees. I’m guessing the junk bondholders were also cheered by the email, which goosed the price of both JNK and its cousin, HYB.

As I said in the SPX section, not much happened today. The sole bit of interesting news surrounded BRExit, although I read in one article that the positive chatter might be the various parties (Barnier, in this instance) positioning themselves so that responsibility for a hard BRExit would shift to the other side if things blew up. “I wasn’t the hard-ass – it was all about them being intransigent.”

The fun story of the day came from the Asia Times, talking about some reactions from locals about Xi’s $60 billion aid program to Africa.  http://www.atimes.com/article/chinese-netizens-fume-over-xis-us60-billion-africa-handout/

In another sarcasm-laden post on Weibo, a citizen proposed raising capital to buy a chunk of land in Africa, then recruiting a local person as a figurehead leader to found a new nation and then seek diplomatic ties with Beijing.

He promised to return the money with interest to partners once the “new nation” receives aid from Beijing, and expected to get a prime plot in downtown Beijing to build the nation’s embassy, with all the immunity, privileges and prerogatives guaranteed.

The post was shared millions of times before censors removed it on Monday evening.

And you thought the US aid program was generous.  Who benefits?  My guess: all the Chinese construction companies (and their shareholders) who get the contracts to build all that stuff in Africa, laundered through the African nations’ leadership who I’m sure take a sizeable cut for themselves.

Ordinary Chinese citizens – not one of the winners.  At least in the US we can complain when we get harvested.