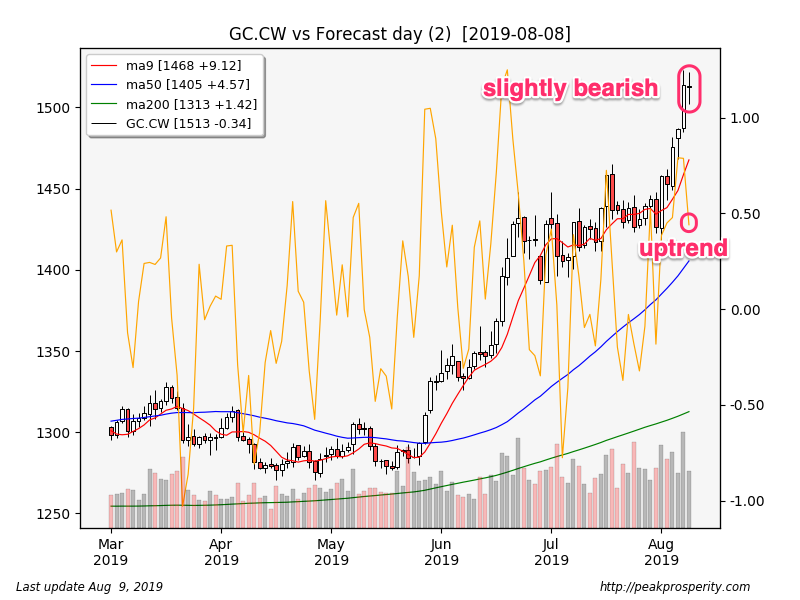 Silver mostly chopped sideways until about 8 am, when it sold off fairly hard, losing about 25 cents in about half an hour. It tried to bounce back but didn’t fare so well. The bearish harami candle was bearish (47%), and forecaster dropped hard, but still left silver in an uptrend. Silver remains in an uptrend in all 3 timeframes. 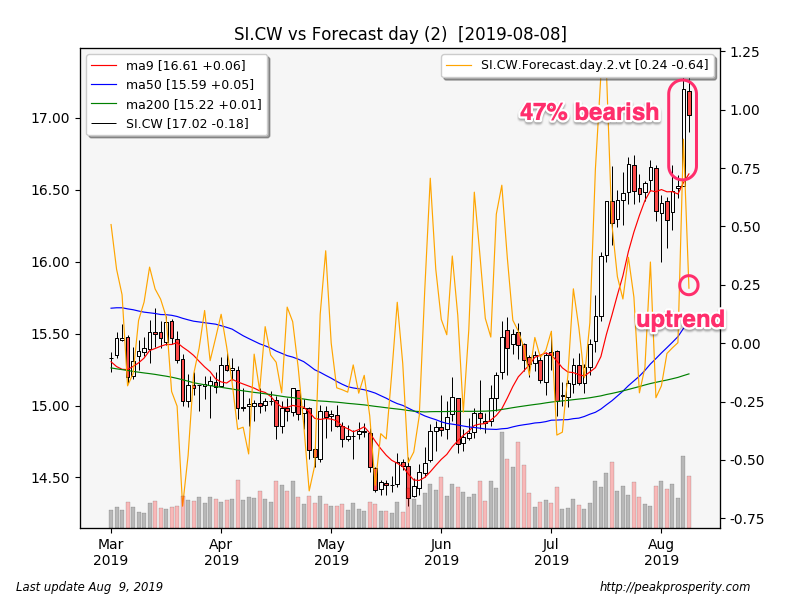 The miners gapped down at the open, but then rallied all day long, closing near the highs. GDX climbed +1.74% on heavy volume, while GDXJ moved up +1.58% on moderate volume. XAU rose +0.91%, the long white candle was a bullish continuation, and forecaster moved down slightly but remains in an uptrend. XAU remains in an uptrend in all 3 timeframes. Today was a new closing high for the miners. I take it as a positive sign that even the modest morning dip was strongly bought. 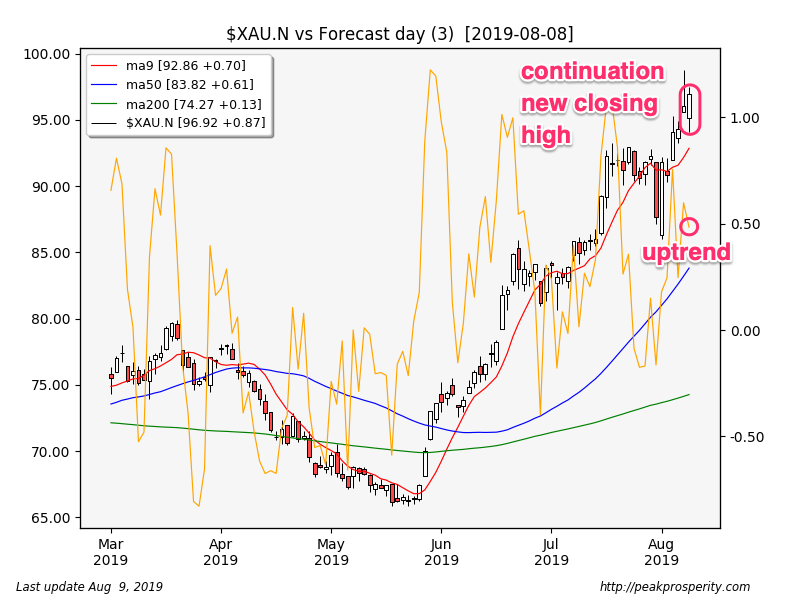 Platinum rose +0.09%, palladium climbed +0.16%, while copper rallied +0.41%. This is the third up-day for copper after the strong post-tariff plunge, and it coincides with the rally in equities. Dead cat bounce or a real reversal? Weekly forecaster for HG remains in a downtrend, and the monthly could go either way: I’m leaning bearish.

The buck rose +0.08 [+0.08%] to 97.19. The doji/NR7 candle was neutral, while forecaster moved into an uptrend. The buck is now in an uptrend in both daily and weekly timeframes – but that uptrend is pretty tenuous. My guess is, the monthly downtrend will dominate over time, and the dollar will continue moving lower.  That could change if we get some bad economic news out of Europe.

SPX jumped +54.11 [+1.88%] to 2938.09. Perhaps 20 points of the move came in the futures markets overnight, but once the market opened, it was just straight up for most of the day. The white marubozu was bullish (64%), and forecaster shot higher, moving SPX back into an uptrend. SPX is now in an uptrend in both daily and monthly timeframes.

TLT rallied +0.21%, the closing white marubozu was a bullish continuation, and while forecaster fell, it remains in an uptrend. Given the large equity market rally, this was a strong performance by the 30-year bond fund. TY moved up +0.09%; the spinning top was a bullish continuation, and forecaster fell, but remains in a reasonably strong uptrend. The 10-year yield rose +3.2 bp. That’s not bad given just how strongly equities rallied.

JNK rallied +0.30%, the opening white marubozu was a bullish continuation, and forecaster moved into an uptrend. JNK is affirming the risk on mood. The BAA.AAA differential moved up +1 bp to +85.

Risk on returned today; copper, JNK, and equities all pretty much agree.  And yet bonds and gold didn’t see much selling at all.  Where does that leave us?

We know gold is in a bull market, after 6 long years in the wilderness.  So too are bonds.  But equities?  They are not yet in a bear market.  The first sign of that is a lower high.  We haven’t seen that yet.

Today we saw a decent bid underneath the miners.  They made new highs, even though gold was basically flat.  That’s a positive sign.  As I have said before, I believe that there are a large number of long-suffering goldbugs who have been disappointed by every miner rally for the past 6 years.  As a result, some number of them have been conditioned to sell once the rally seems to run out of steam.  I suspect that’s what is happening now.

I understand, the feeling is strong – cash in while you can, lest your gains disappear once more.  I think that is why XAU is underperforming gold.  But things are different this time.  The other times, gold tried to rally and then failed.  This time, gold has broken out of its trading range.  That’s a big change.

Anyhow, that’s my thought for the day: since I’ve stuck it out for 6 years, I might as well hang around for another 2-3 and see what happens.

Full disclosure:  I don’t have any personal/financial interests in any of the above mentioned entities, nor am I promoting any of the above.  I just thought PP members on this forum might find this information interesting.