Gold broke above round number 1500 early in the Asia session, and then made another leg higher in London. There was some selling pressure towards the end of the trading day, but gold managed to hang on to most of its gains by the close. Gold made yet another new 6-year high today. The long white candle was somewhat bearish (41%), and forecaster inched lower but remains in a strong uptrend. Gold remains in an uptrend in all 3 timeframes. Gold’s RSI-7 is 80, which is somewhat overbought.

COMEX GC open interest rose 1,822 contracts. It does not look like there is a lot of shorting going on right now. Isn’t that interesting? The commercials are … well they appear to have been wrong-footed by this breakout. That doesn’t happen very often. 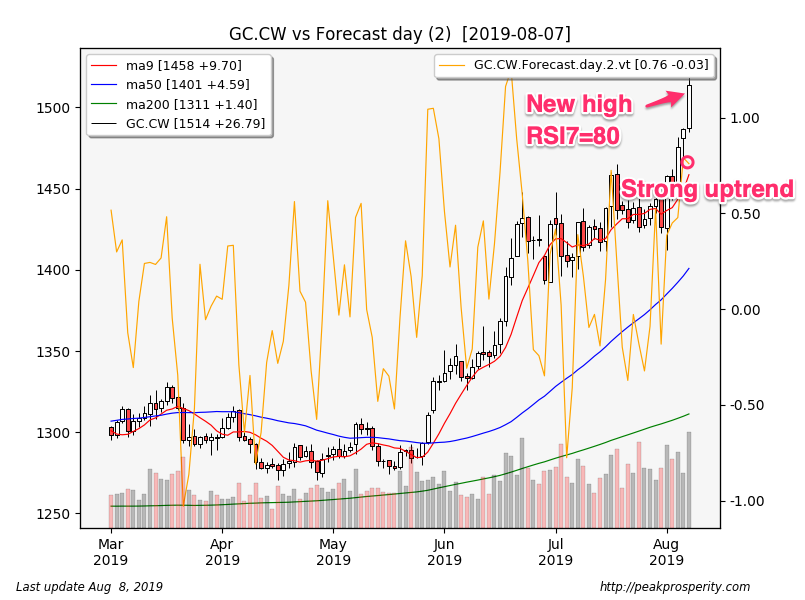 Silver jumped to a new high early in Asia, chopped sideways for a time, and then rallied strongly through the afternoon in the US, making a new high to 17.26. That’s a breakout above a previous high, and a breakout and close above round number 17. And did I mention a +0.67 move? The opening white marubozu was a bullish continuation, and forecaster screamed higher, putting silver in a very strong uptrend. Silver is in an uptrend in all 3 timeframes – and the longer term uptrends look quite strong. They have for a while now – but apparently it took the daily a while to catch up.

The gold/silver ratio plunged -1.95 to 88.00. That’s very bullish, but even after today’s big move, silver remains undervalued relative to gold. Strongly, strongly undervalued.  Not financial advice – nor timing advice.  Silver’s RSI-7 is 78, which is verging on overbought. 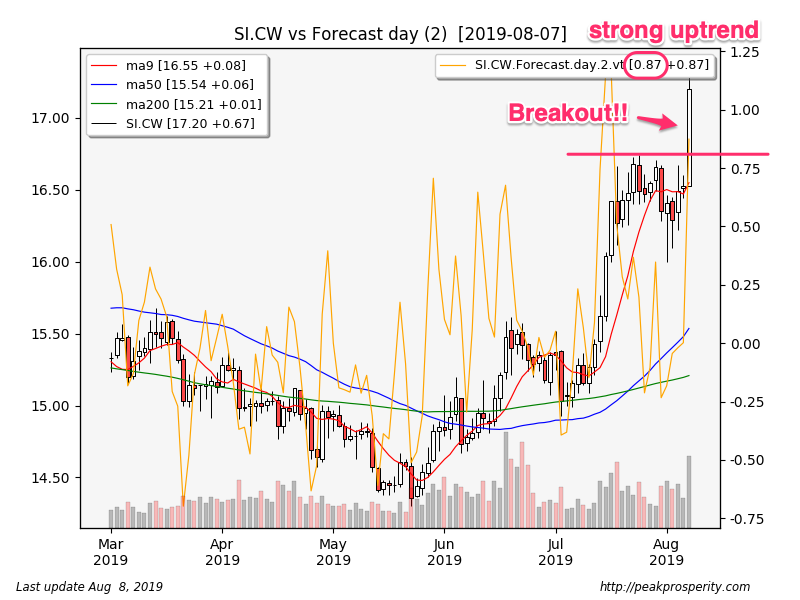 The miners gapped up strongly at the open, rallied briefly in the AM, and then ended up lower by end of day. GDX rose +2.06% on very heavy volume, and GDXJ climbed +2.32% on very heavy volume also. XAU climbed +1.84%, the shooting star candle gave off conflicting signals (both bullish and bearish), and forecaster moved higher into a moderate uptrend. XAU remains in an uptrend in all 3 timeframes, but the trends for XAU do not look as strong as they do for the metals. For the miners to rise less than silver is a bearish sign – for some reason the mining shares are just looking a little tired. 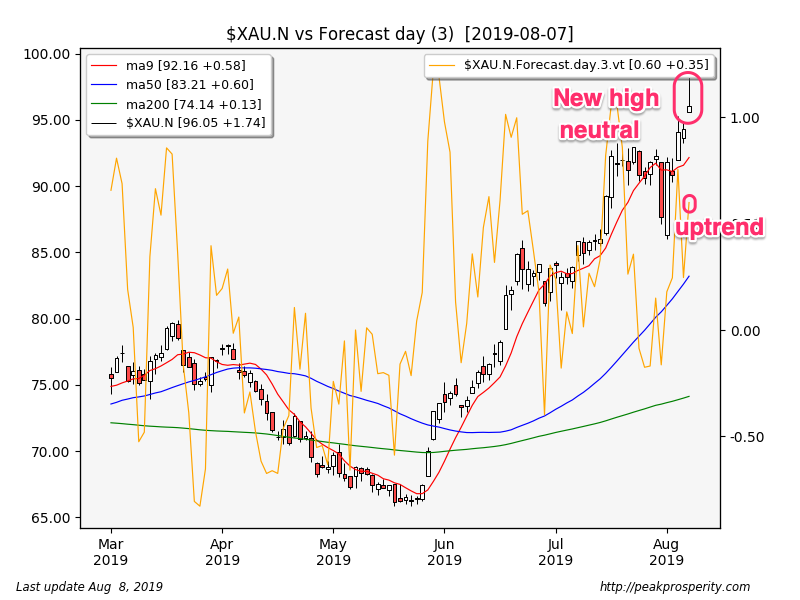 Platinum jumped +1.45%, palladium fell -1.71%, while copper rallied +0.88%. The copper rally roughly coincided with the rally in US equities. Copper forecaster jumped back into an uptrend today. If it holds, it migt be suggesting a temporary low for risk assets – perhaps the initial tariff/China-driven plunge is now past

The buck fell -0.07 [-0.07%] to 97.11. The long legged doji was somwhat bearish, and forecaster moved lower into its downtrend. The buck remains in a downtrend in the daily and monthly timeframe, and the weekly is just about to reverse as well. 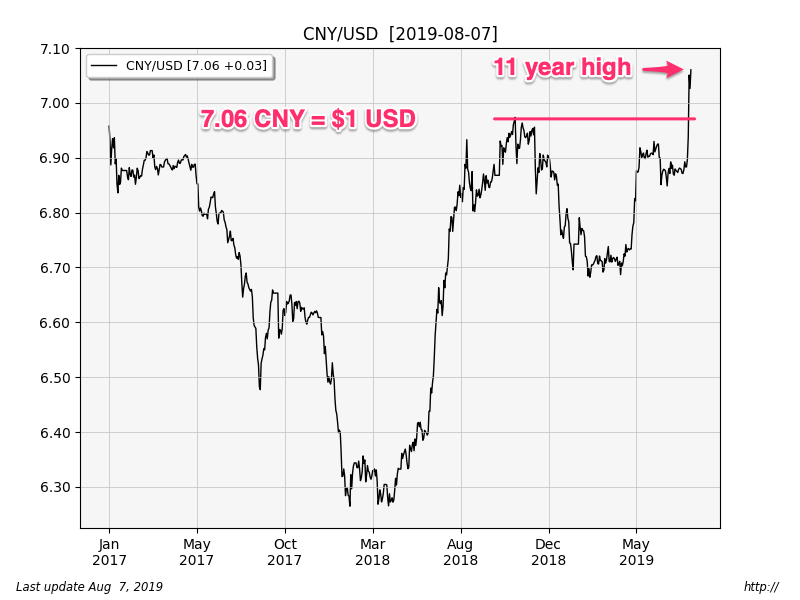 SPX rose +2.21 [+0.08%] to 2883.98. SPX fell hard in the futures markets overnight, fell a little more at the open, and then managed to rally back into the green by end of day. The spinning top candle was somewhat bearish, and forecaster moved higher, but not enough to pull SPX back into an uptrend. As mentioned, it looked like the rally in copper helped the equity market – or at least it happened at roughly the same time. Likewise, bonds topped out right at the SPX intraday lows.  So if this was some “game” by “someone”, it moved a number of markets all at the same time.  SPX remain in a downtrend in the daily and weekly timeframes.

TLT moved up +0.04%; TLT gapped up hard at the open, and then sold off all day long – falling as the equity market rallied. The long black candle was actually bullish, and although forecaster fell, it remains in a reasonably strong uptrend. TY fell -0.22%; the shooting star candle was bearish (44%), and forecaster fell but remains in an uptrend. TY remains in an uptrend in all 3 timeframes. The 10-year yield fell -5.5 bp to 1.68%. As a point of reference, the all time series low for the 10-year yield came in 2016: 1.37%. We are really not all that far away from that level.

JNK moved up +0.02%; JNK gapped down at the open, but then rallied along with equities. The long white candle was mixed, but forecaster moved slightly higher but it remains in a downtrend. The BAA.AAA differential remains at +0.84.

I’m sure you’d like to know why gold jumped more than $20 today, and why silver screamed up more than 60 cents.  I’m sorry to disappoint – I have no idea.  I could tell you there were a whole lot of new buyers – and they outnumbered the sellers.  I mean that’s true, but perhaps it is a bit unsatisfying.  There wasn’t any macro news that I saw, nor any large currency moves.

Certainly the commercials do not seem to be heavily shorting gold any longer.  That probably helps gold to continue moving higher, perhaps more violently too.  Also the massive silver rally probably helped gold too.  Who knows, maybe it was just a bunch of traders looking at the PM sector and noticing that silver was undervalued.  But honestly, we just don’t know.  Sometimes uptrends take on a life of their own.  FOMO, they call it in bitcoin-land.

The miners are definitely looking a bit ill. While they made new highs, it was pretty clear a bunch of people were ringing the cash register today at the highs.  Perhaps long-suffering goldbug-miner-owners finally moved into the green, and – not wanting to be disappointed yet again – cashed out and took the money and ran.  But that’s just a story.  It would take a bankster, monitoring all of his customer’s transactions, to know the truth.  But I’m sure they don’t do that.  Why if they did, they might get a fine.

The metals are not yet seriously overbought, believe it or not.

Once again, I am reminded of the words of Jesse Livermore.  The temptation to play the “fluctuations” on the way up is quite strong.  His advice is to just sit.  It is boring, but that’s how the big money is made.

ABN must investigate all five million private customers from regulator DNB, to check whether they are not involved in illegal practices such as money laundering, corruption or terrorist financing. What does that mean for you as a customer and what will the bank investigate?