As I posted in the comment section yesterday, the rumor (via Rick Rule @ KWN) is that Turkey has sold 50-75% of their gold holdings as a result of their currency crisis, and this selling pressure has resulted in a counter-intuitive decline in gold during what should be a big safe-haven move in the metal.

Gold was under pressure for much of the day, dipping in Asia, trying to rally later in London, and then selling off hard just before the US market opened. The long black candle was a bearish continuation, but forecaster moved up +0.07 to -0.05; that doesn’t look all that bad. Gold ended the day right at the 9 MA. Today’s drop took gold out of its weekly uptrend – it is now in a downtrend in all 3 timeframes. 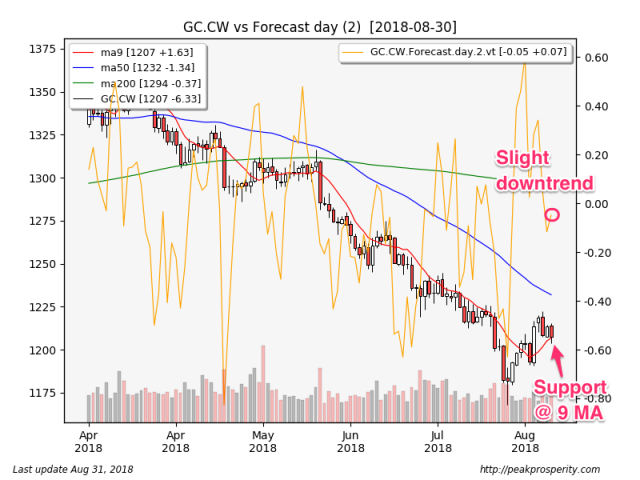 Silver looked weaker than gold, selling off for much of the day, but with the big move happening just before the US market open. The long black candle was a bearish continuation, and forecaster fell -0.09 to -0.31; the downtrend is getting a bit worse.  Silver is below its 9 MA, but it has not yet broken its uptrend line.  If it does break the uptrend line, I expect a re-test of the lows which may not hold.  We have to respect the monthly downtrend that remains in place. Silver remains in a downtrend in all 3 timeframes. 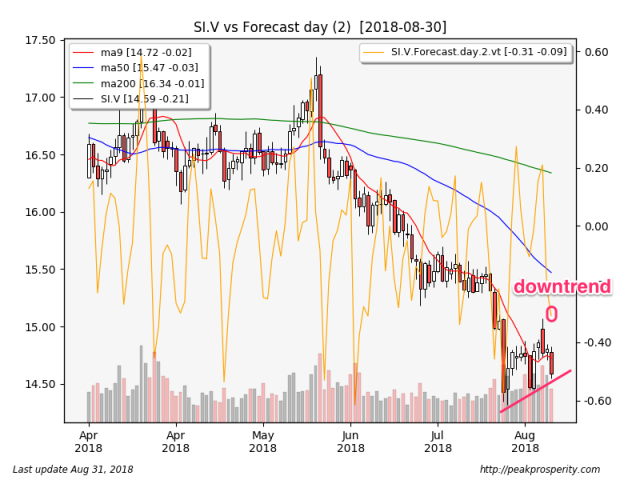 Miners did poorly, with GDX down -1.58% on moderately heavy volume, while GDXJ dropped -1.49% on moderate volume. XAU fell -1.78%, worse than both ETFs. XAU’s short back candle was a bearish continuation, and XAU forecaster fell -0.20 to -0.21, moving a bit deeper into downtrend. XAU has fallen below its 9 MA, and is just above its uptrend line – much like silver.  XAU needs to rally tomorrow in order to avoid a re-test of the lows. XAU is in a downtrend in all 3 timeframes.

Part of the Rick Rule piece from KWN involved talking about the liquidation of the Vanguard Wellington Gold Fund.  According to Rick, this fund ended up selling a “whole bunch of positions” they had in gold mining companies – and this put a lot of pressure on the mining share prices. And here I thought it was just bad earnings. Rick said he was a buyer. “I like goods when they are on sale.”  Of course, the discounts can always get even deeper.  Then again, Rick has been at this for decades.  Of course, he’s also long, so he would prefer you to buy to help his position.  How’s that for certainty? 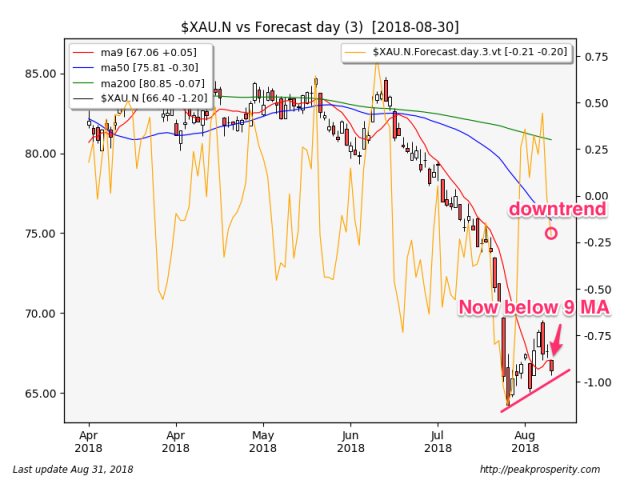 Platinum fell -0.95%, palladium rose +0.06%, while copper fell -1.09%. Copper and platinum both remain in downtrends, although the charts do not appear to have broken down just yet. Palladium made a new high, although its upside momentum appears to be slowing.

Part of the problem could have been an interview with Trump where he more or less said he was planning on going ahead with the $200 billion in tariffs on Chinese imports, starting as soon as next week. Others in the administration say that Trump hasn’t made his final decision, and it is possible that the administration will enact the tariffs in installments; Trump could also announce the tariffs but will hold off on the implementation, as he did in mid-June. Bloomberg has a solid article about the situation, as follows:

The buck’s long white candle was mildly bullish (31% bullish reversal), and forecaster moved up +0.11 to -0.35, which is still a downtrend. Buck remains in a downtrend in both the daily and weekly timeframes. As the situation in Turkey gets worse, I expect to see more pressure on the Euro. Given the Turkish central bank’s unwillingness to lift rates to restrain Turkey’s incredibly inflationary credit boom, there’s really only one possible outcome in Turkey.  Erdogan does not want the party to end.

Crude rose +0.27 [+0.39%] to 69.63, breaking more decisively above the previous high set back in early July. The spinning top candle was a bullish continuation, and forecaster rose +0.10 to +0.29, which is a moderate uptrend. Crude is in an uptrend in all 3 timeframes. The rally in crude comes in the face of weakening industrial metals prices, the prospect of $200 billion in tariffs on Chinese products, and currency problems in Turkey, Argentina, and to some degree India. What’s driving the oil price higher? Well, mostly Iran. Iran’s exports have dropped 1 mbpd over the past month; while Brussels is trying to support Iran, European refineries have cut back on imports, and European banks have backed away from providing insurance for Iran’s oil cargoes. Oil inventories are also in decline. Nick Cunningham has the details: 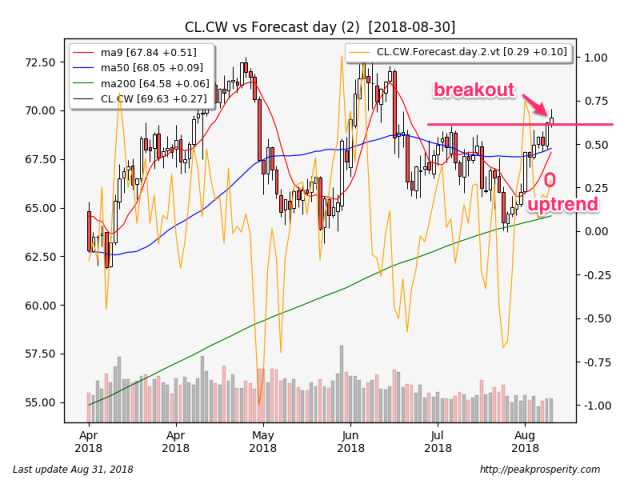 In spite of the decline in the US market, it was the best-performing equity market in all of the regions.  Things did not go well in Latin America, which was down more than 3% today.

TLT rose +0.21%; it wasn’t a dramatic move, but was likely a result of safe haven flows. TY also rose, up +0.20%. The TY candle looked stronger, but at least according to my code, the print wasn’t all that bullish. Forecaster ticked up just +0.05 to -0.28, which is still a downtrend for TY. TY’s rally unwound this week’s sell signal, which puts TY back into an uptrend in both the weekly and monthly timeframes. The 10-year yield fell -2.4 bp to 2.86%. It feels as though bond prices are set to continue moving higher. Perhaps that’s about Turkey. And Argentina.  And now maybe India.  My sense is, the monthly forecaster is telling the right story, and it has been consistently bullish for the past 3 months.

JNK fell -0.11%, ending the day below the 9 MA, and with JNK forecaster issuing a sell signal. I’m not sure how serious this is – but it does align with the decline in the equity market. Hints of risk off from junky debt.

CRB fell -0.08%, with 4 of 5 sectors moving lower, led by industrial metals (-1.12%). Energy was the sole sector moving higher – and that seems to be all about sanctions on Iran, more or less.

Nonfarm Payrolls come out tomorrow, and the tea leaves suggest it will be a strong report. With the tax cuts (funded by borrowed money) implemented last year, this resulted in a stimulus program that ended up boosting GDP into the 4% range just in time for the mid-term elections. This event was not simply a fortuitous accident. Republicans always scream about deficits – right up until they are in power, and then they spend like drunken sailors ashore on WESTPAC, with taxpayer money, to keep themselves in power.

Unless we get some sort of movement forward on China & tariffs, I expect that gold (and the metals complex overall) will weaken as the comment period ends on the $200 billion in tariffs – scheduled for September 6th. Gold and silver have resumed their downtrends; will they end up re-testing the lows? I’d say yes, more likely than not. It would be nice if Canada signs up to NAFTA II (which we aren’t supposed to call NAFTA), but I’m not sure it would prove decisive in reversing the decline in the metals.

At the same time we are approaching a seasonally strong period for gold; September is typically the strongest month of the year. Maybe that will offset things, to a degree.

And the wildcard is Turkey.  If Turkey has really been dumping its gold holdings in order to prop up the currency, then at some point the selling will end – when they run out of gold – and we will see that reflected in prices. Perhaps the end of selling is what the commercials are waiting for. Turkey’s external debt is $466 billion, its forex reserves are at $124 billion (a 5-year low), and its gold holdings are about $25 billion. They could sell all their gold and barely put a dent in all the money they owe.

We will just have to see how things go. If/when the selling ends, assuming selling from Turkey is what is causing troubles for gold right now, we should see a very brisk rise in the price of the metal. It could also be Venezuela too. As of last count, they still have 150 tons of gold on hand, and they’re very desperate.