Today’s market-moving news was: China’s decision not to respond to Trump’s latest round of tariff increases. Commerce ministry spokesman Goa Feng said, “Escalation of the trade war won’t benefit China, nor the U.S., nor the world.” Whoa.  It appears that happened around 3 am Eastern.  That marked the top for gold, and it caused SPX futures to jump higher.

Gold rallied in Asia, hitting 1560 at one point, but then started selling off – the selling became more intense after the US market opened, with the day low happening at around 2:30 pm. The long black candle was neutral, but forecaster fell hard, dropping gold into a downtrend. Gold remains in an uptrend in the weekly and monthly timeframes, and above all 3 moving averages.

Gold/Euros remains in an uptrend in all 3 timeframes. At least some of gold’s plunge today was a currency effect. 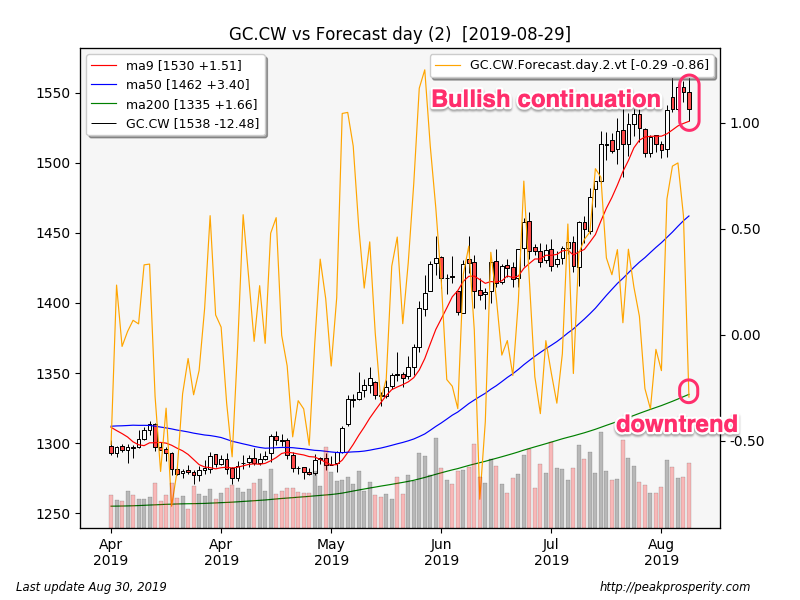 Silver rallied for at least half the day, making its high around 8:30 am; thereafter it sold off fairly hard, hitting the low around 2:30 pm along with gold. The high wave candle was somewhat bearish (44%), and forecaster dropped hard, but remains in an uptrend. Silver remains in an uptrend in all 3 timeframes. 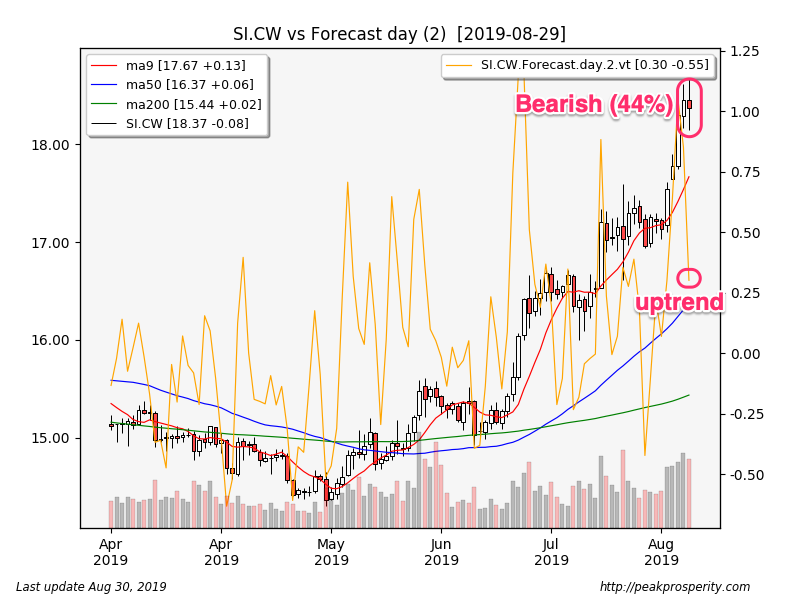 The miners sold off for most of the day; GDX fell -2.47% on heavy volume, and GDXJ plunged -2.80% on heavy volume also. XAU dropped -2.69%, the swing high pattern was actually neutral and forecaster fell but remains in a reasonably strong uptrend. However today’s move was enough to drag the weekly into a downtrend; that leaves XAU in an uptrend in both daily and monthly timeframes. 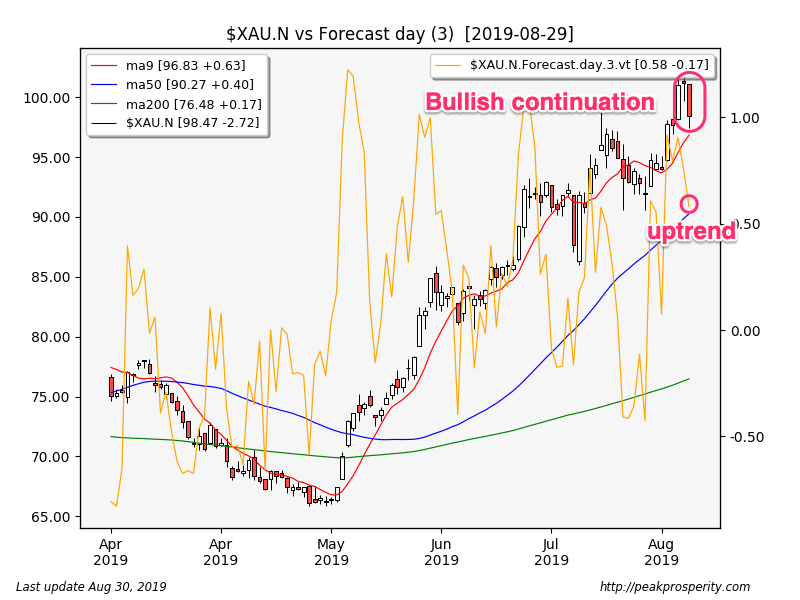 Platinum rose +1.59%, palladium climbed +0.21%, and copper moved up +0.16%. This was the second large day for platinum; it managed to rise above April’s high, and touch prices last seen in early 2018. Copper for its part moved into an uptrend with today’s rally.

The buck rose +0.32 [+0.33%] to 98.09, which is a new multi-year closing high for the buck. The closing white marubozu was a bullish continuation, and forecaster jumped higher into a reasonably strong uptrend. The buck remains in a downtrend in both weekly and monthly timeframes – I’m working on the models, these downtrends just don’t seem right to me.

Crude rose +0.64 [+1.15%] to 56.34. The long white candle was a bullish continuation, and forecaster inched lower but remains in a strong uptrend. Today’s rally took crude just above its 200 MA. Crude remains in an uptrend in all 3 timeframes.

SPX climbed +36.64 [+1.27%] to 2924.58. The long white candle was a bullish continuation, and forecaster jumped higher into a reasonably strong uptrend. The rally was enough to unwind the monthly downtrend – SPX is now in an uptrend in both daily and monthly timeframes.

TLT fell -0.38%, the swing high candle pattern was actually a bullish continuation (!), but forecaster plunged, dropping TLT into a modest downtrend. TY fell -0.11%, the confirmed bearish NR7 was actually a bullish continuation, and forecaster moved lower but remains in an uptrend. TY remains in an uptrend in all 3 timeframes. The 10 year yield rose +5.0 bp to 1.52%.

JNK rose +0.10%, the closing black marubozu was somewhat bearish (37%) but forecaster inched higher and remains in a mild uptrend. Interesting that junky debt didn’t really move higher alongside equities. BAA.AAA differential was unchanged at +92. Still no worries from the low-quality credit market.

So, does the news out of China mean that all is well in Trade War Land?

I don’t think so.

My guess is that China is being all friendly because of the building tension in Hong Kong.  Take a glance at today’s SCMP:

And one more, from Reuters:

The last one confirmed my suspicions: the “extradition” law (i.e. the law allowing Beijing to snatch up anyone they want from Hong Kong, and “try them” in a mainland court) was probably not Carrie Lam’s idea, and when she suggested pulling it, Beijing said no.  This info was leaked – my guess – by some of her cronies who just perhaps see something really unpleasant in the offing and are trying to avoid the blame for what’s about to happen.  “They said no” to all five demands, said the source. “The situation is far more complicated than most people realize.”

I think given the unrest in Hong Kong, any momentarily flexibility China is showing on trade is just a smokescreen – they don’t want a two front war, and so they will continue to make happy trade noises for a month while they work on getting Hong Kong back in line.

So if this “happy trade news” causes a dip in PM, well, I’m more interested in buying than selling.  Likewise, a rally in SPX – is an opportunity for me to go short.  That’s just my sense based on how I see things unfolding.

And definitely not financial advice.  🙂