Most of gold’s move took place during the morning in the US; the long white candle was unrated, and forecaster was unchanged, remaining in a strong uptrend. This was a new closing high for gold – last time gold was here was back in 2013, and a new all time closing high for gold/Euros. Gold remains in an uptrend in all 3 timeframes.

COMEX GC open interest rose a massive +24,192 contracts; about 50% of a BRExit, or 11 days of global production in new paper.  Maybe that’s why gold only moved up $15, while silver did so much better. 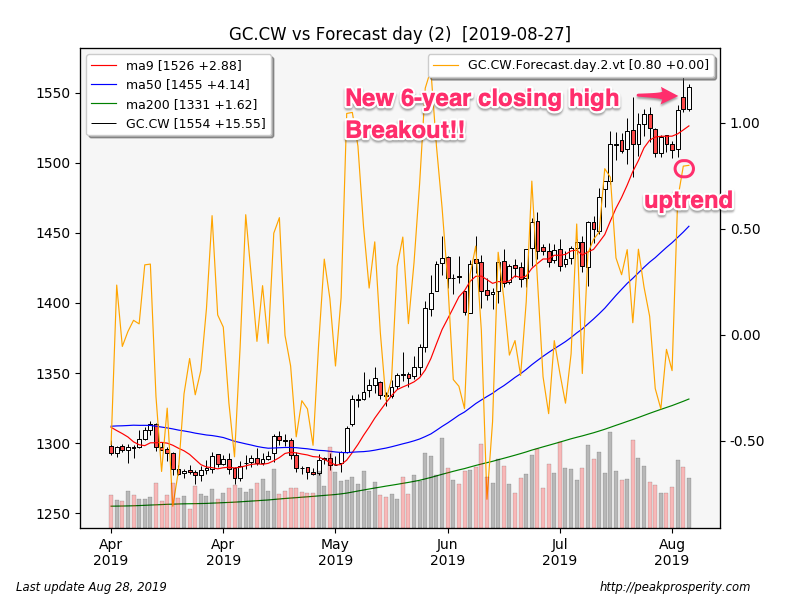 Silver moved slowly higher in Asia and London, but the big moves came in two legs: one at 7 am, and another at around 10:30 am. The white marubozu candle was a bullish continuation, and forecaster jumped higher and is now in a very strong uptrend. This was just a new 2-year high for silver. Silver remains in an uptrend in all 3 timeframes. 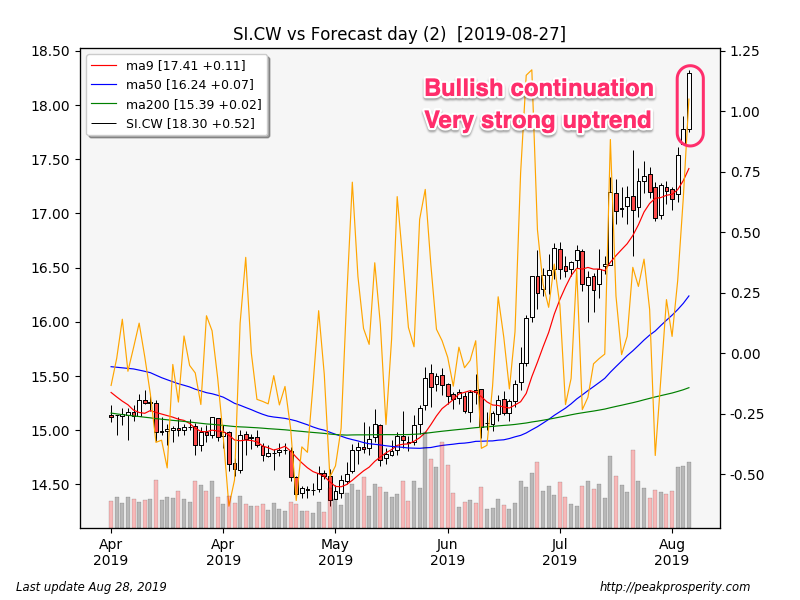 The miners rallied for the first half of the day, and ended up closing at the highs. GDX climbed +3.10% on very heavy volume, while GDXJ rose +2.89% on moderately heavy volume. XAU moved up +3.42%, the opening white marubozu was a bullish continuation, and forecaster moved higher into a strong uptrend. This was a new high for XAU, dating back to mid-2016. XAU remains in an uptrend in all 3 timeframes.. 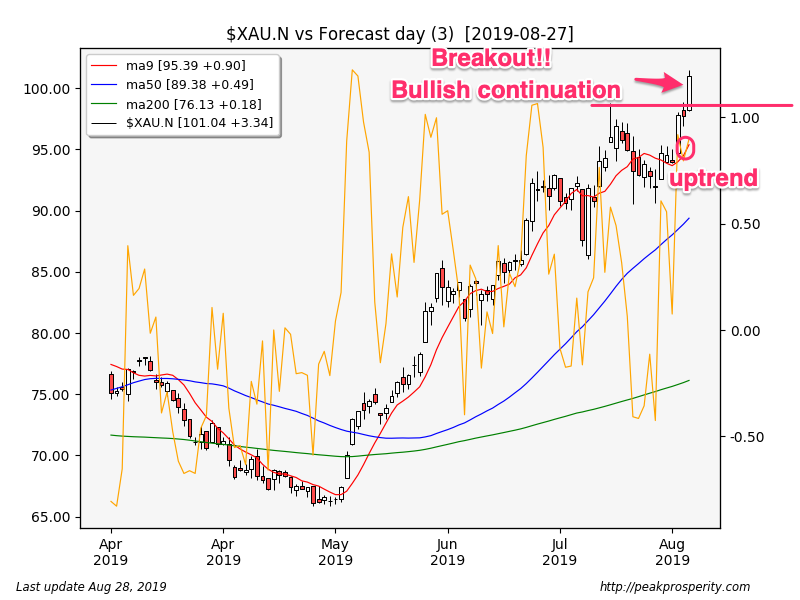 Platinum rose +1.16%, palladium moved up +0.50%, and copper rose +0.63%. Copper printed a moderately strong swing low (52% bullish) but it remains in a downtrend. Platinum is in an uptrend, but it is still quite far from breaking out to new highs. 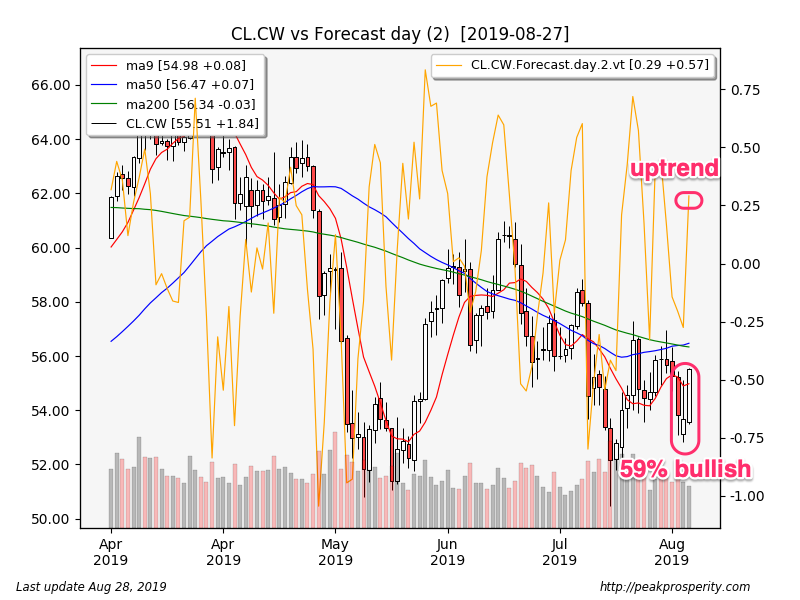 SPX fell -9.22 [-0.32%] to 2869.16. SPX rose in the futures markets overnight, but fell right after the open, and was never really able to recover. The long black candle was bearish (44%), and forecaster moved lower, but not quite enough to move SPX into a downtrend. SPX remains in a downtrend in both weekly and monthly timeframes. The currently-forming monthly candle print looks really horrid (92% bearish) but we still have a few days left before it closes out.

TLT screamed higher, up +1.54%. The closing white marubozu was a bullish continuation, and forecaster remains in an uptrend. This was a new closing high for TLT. TY also rallied, up +0.31%, the short white candle was mildly bearish (31%), but forecaster moved higher into an uptrend. TY remains in an uptrend in all 3 timeframes. The 10-year yield fell -5.5 bp to 1.49%. This is a new 3-year low for the 10-year yield – dating back to mid-2016.

JNK fell -0.02%, the long black candle was mildly bearish (31%) and forecaster moved lower but remains in an uptrend. Just nothing seems to be able to derail junky debt. BAA.AAA differential was unchanged, and remains at +91 bp. No worries from the low-quality credit market.

Trade agreement, no trade agreement – gold continues moving higher. Bonds too. Equities continue looking weak (the monthly candle pattern currently forming is very bearish), and we are coming up on September which happens to be a particularly poor-performing month for equities.   https://www.investopedia.com/ask/answers/06/septworstmonth.asp

Do you get the sense we’re in a gold bull market? I mean, at some point it will correct for sure – perhaps at the next Fed meeting if they decide not to cut rates. Hypothetically anyway. But what will happen to equities if they do this?

You can tell gold is becoming more popular – they have to write scary articles about it to depress popular interest.  You didn’t see any of those during the bear market.  Here’s an article about “fake gold” – which is “mostly real” kilo-bars (out of China!!) but with counterfeit refinery stamps and slightly less purity. Gotta be scared of that physical stuff. Buy paper instead.

An estimated 400 to 600 tonnes of gold are snuck every year across the border from mainland China to Hong Kong in car boots and delivery vans, most of it in kilobars, said Cameron Alexander, head of precious metals research at consultants GFMS Refinitiv, which conducts detailed studies of global gold flows. Hong Kong Customs said it had received no complaints in the past decade about kilobars with forged trademarks.

That’s a $29 billion annual money flow.  I wonder how much bitcoin accounts for?

Gold is starting to become a topic again.  That’s a bullish sign – at least to me anyway.

FWIW, I had the pleasure of talking to an old high school friend who I haven’t spoken with for over 2 years. We chatted for about an hour. Somehow, him wanting to buy gold came up during the conversation. I’ve never heard him mention anything about gold in our  previous chats.

File it under interesting, I suppose.

I live in a small town in Arizona full of retired people. Everyone here has always snubbed Gold or act like they had never heard of it before when I have mentioned it to them in the past. Now a local realtor has told me that many of her clients are now buying gold. This is a little more than strange for this town.