The market-moving event today was a comment by Trump on Monday that his negotiators had received two “very good calls” from China on Sunday – China’s foreign ministry denied knowledge of any calls. Trump’s comment came after Chinese trade negotiator Liu He gave a speech in which he stated that China is willing to resolve disputes through calm negotiations.  Trump’s comments caused instant reactions in gold, silver, and bonds (down), as well as equities, copper, and crude oil (up).

Gold screamed higher – more than $30 – at the open, but moved lower for the rest of the day, dropping more than $10 on Trump’s “phone call” comment. The shooting star candle was mildly bearish (35%) but forecaster moved higher and remains in a strong uptrend. Gold remains in an uptrend in all 3 timeframes. 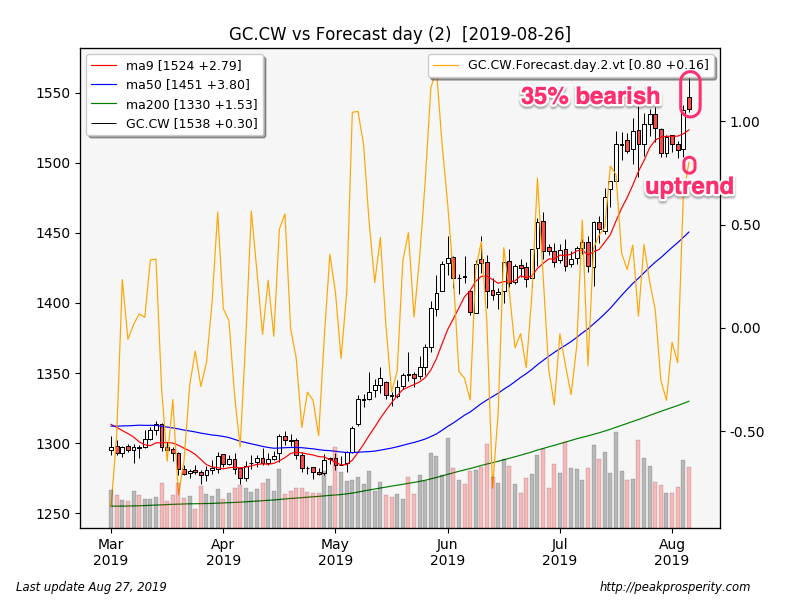 Silver spiked up at the open, and then more or less chopped sideways for the rest of the day. The opening white candle was a bullish continuation, and forecaster moved higher into what is now a strong uptrend. Today was a 2-year high (Sep 2017), and a new closing high for silver. Silver remains in an uptrend in all 3 timeframes. 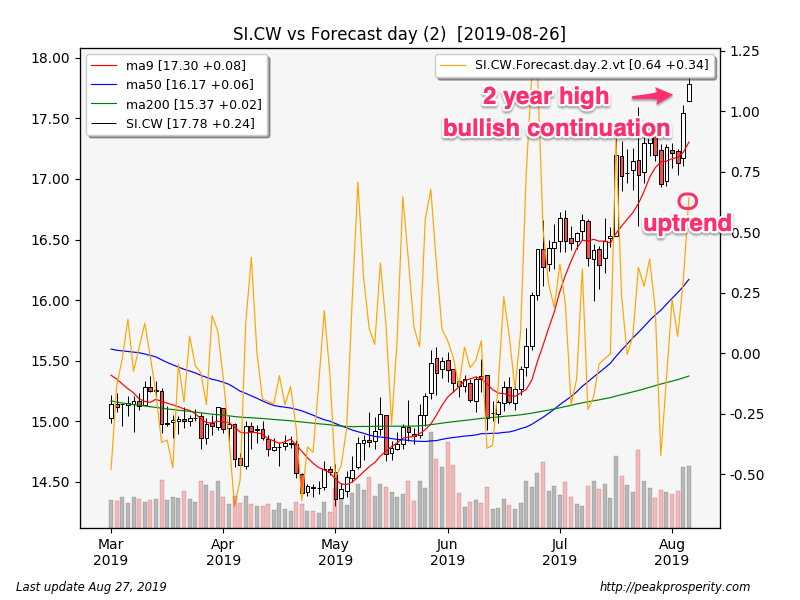 The miners rallied in the first few hours, making new highs, but then sold off for most of the rest of the day. GDX was unchanged on moderate volume, and GDXJ fell -0.05% on moderately light volume. XAU dropped -0.08%, the spinning top candle was bearish (44%), and forecaster moved slightly lower but remains in a strong uptrend. XAU remains in an uptrend in all 3 timeframes. 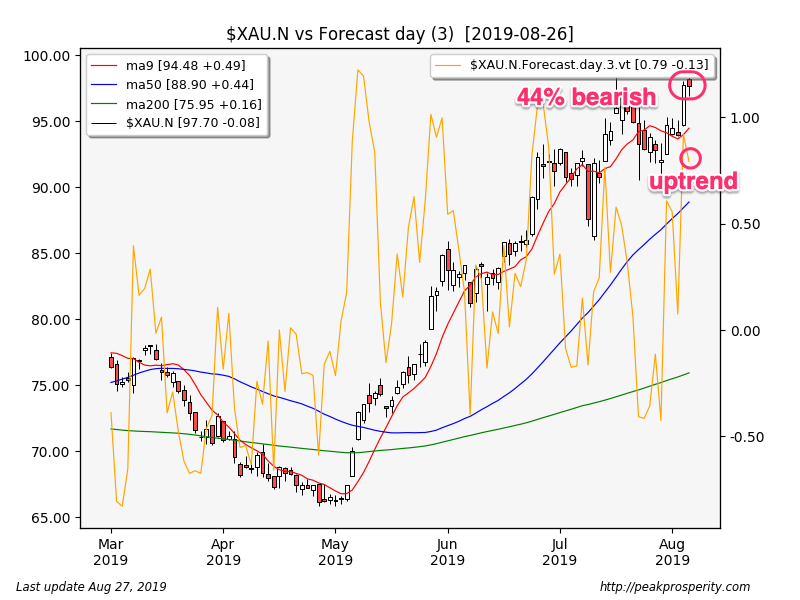 Platinum fell -0.17%, palladium rose +1.24%, and copper climbed +0.40%. Copper made new multi-year lows at the open in Asia, but then came back – jumping higher on Trump’s comment. The long white candle was bullish (43%) but forecaster remains in a deep downtrend. It will take more than one day to pull copper up and out of the 2-year lows.

Crude fell -0.16 [-0.30%] to 53.67. Crude gapped down at the open, then rallied up more than $2 (with most of the gains coming following Trump’s comment), but then retreated after the US open, losing all of its gains by the close. The inverted hammer candle was bullish (50%), but forecaster moved lower into its downtrend. Crude ended the day in an uptrend in the weekly and monthly timeframes, but the trends remain very weak.

SPX rose +31.27 [+1.10%] to 2878.38. Futures gapped down at the open, rallied back, and then really spiked higher on Trump’s comment. Most of the gains came in the futures markets overnight.  The bullish harami was actually neutral, while forecaster moved higher, pulling SPX back into an uptrend. SPX remains in a downtrend in both weekly and monthly timeframes.

TLT fell -0.40%, the bearish harami was somewhat bearish (43%), but forecaster moved higher into an uptrend. TY did very well, up +0.51%, with the forecaster jumping into an uptrend. This puts TY into an uptrend in all 3 timeframes. The 10-year yield rose +1.7 bp to 1.55%. I’m not sure why the futures did so well, and the cash did poorly.

JNK shot up +0.51%, erasing Friday’s big move down. Forecaster remains in an uptrend.  BAA.AAA differential fell -4 bp to +91 bp. No worries from the low-quality credit market.

The “phone call” comment from Trump pulled gold back from a fairly dramatic new high; just after the open in Asia, gold managed to hit 1565; in Euros, the day high was 1410, which is a new all time high for gold/Euros.  So while gold didn’t maintain its gains through the close, we can see that the enthusiasm for gold remains quite strong, and if the “trade deal” doesn’t materialize after all, gold will probably continue to charge higher.

While equities did rally, the candle print didn’t look particularly exciting, and bonds didn’t retreat far at all.

So do the Chinese really want to talk?  Probably they do.  More uncontrolled chaos (and Trump is sure good at that) will result in more manufacturing leaving China.  The longer they delay, the more globalized US companies will leave.  Can China afford another 2 years of this?  Well sure – but what will the cost be?  All of China’s neighbors will prosper at their expense.  If China can minimize the damage until Trump is (hopefully) gone in 2020, that would be in their best interest.

My guess: both parties might be able to agree on some sort of “interim” arrangement, with “more to come later.”  Trump will get a “trade win”, China gets reduced chaos and they can wait until 2020 where (hopefully) they will get some corruptible patsy instead of cranky old Trump.  So an interim deal – both sides declare victory and go home for now.  Its a thought anyway.

Note that none of the new announced tariffs have actually been imposed yet.  September 1 is the first deadline.

Nice little move out of the gate.  Let’s see if they do their usual afternoon sell-off.

One thing I’m a bit concerned about is while, yes, some of them have moved much higher off their lows, they are still much lower than they were in 2016 when gold was much lower.  Granted, silver has not spiked into the $20s yet, but it’s like the miners are just slowly grinding higher as if they don’t really have deep conviction about the move in PMs.  Maybe they will catch fire at some point, but for now, they seem a bit skeptical.

I agree about the miners being sluggish.  My guess – I’ve been saying it for a while – goldbugs are tired after 7 years of disappointment, and are bailing out as prices move higher.  Perhaps they view this as another 2016.  That steady selling pressure is keeping the miners from moving higher as fast.

And here we have gold/Euros making a new all time high.

They will be sorry.  Based on the breakout, I believe this is the real move.

Don’t look now but silver is having a 50 cent day.